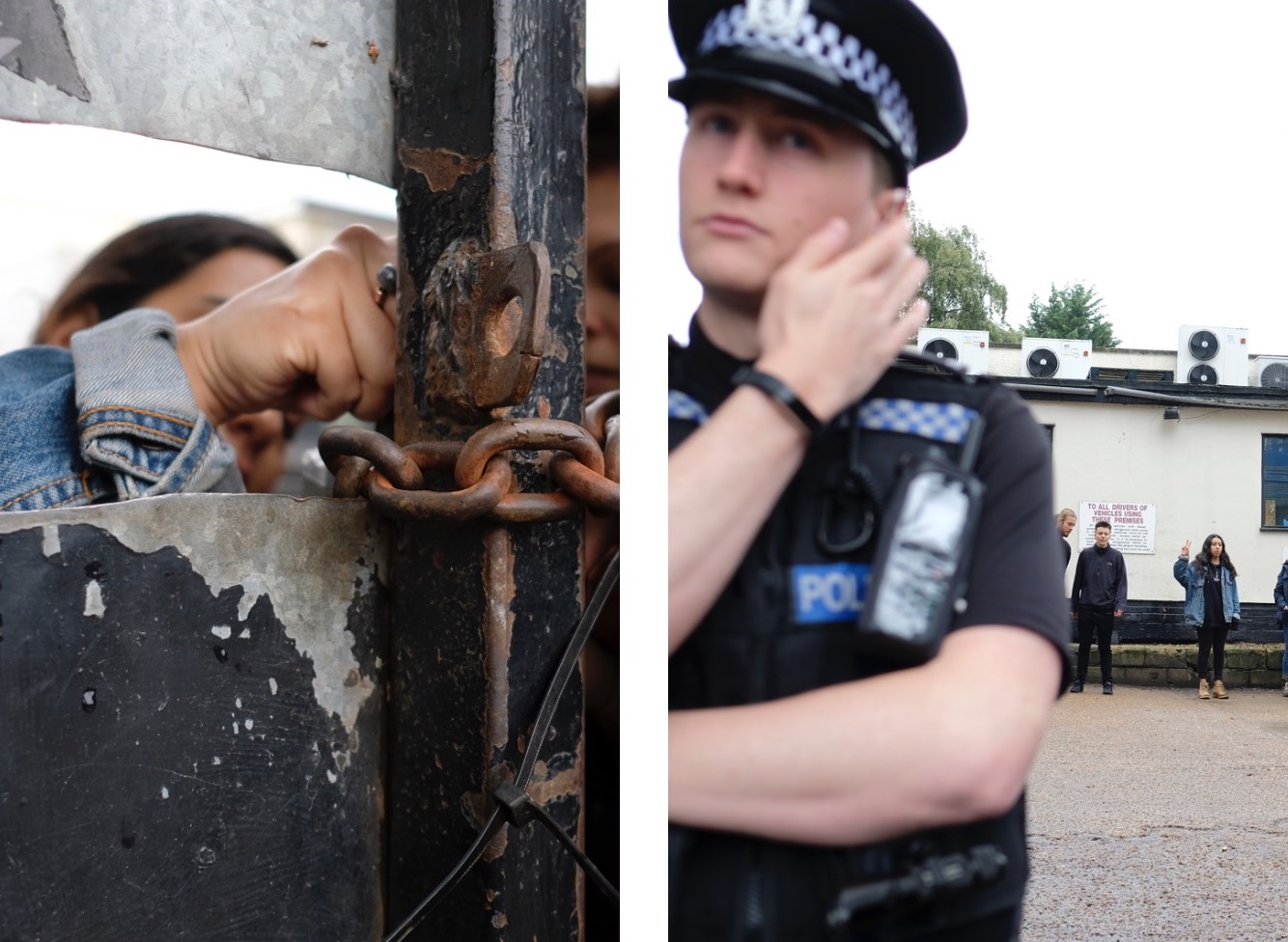 On Wednesday morning, October 16, Animal Rebellion members stormed the Newman’s Abattoir, a slaughterhouse in Farnborough, UK, about 90 minutes southwest of London, to highlight the role the country’s animal agriculture industry plays in the climate emergency. Eighteen activists were arrested.

The protest began at 10 a.m. local time when activists entered through the gates and peacefully walked up to the slaughterhouse, where hundreds of pigs, cows, goats, and sheep are slaughtered every day.

Newman’s Abattoir provides meat to more than 150 different local and national sellers, including Smithfield Market, which the Animal Rebellion group peacefully occupied last week after entering into an agreement with the Smithfield Tenants Association and the City of London Corporation.

Once inside, activists used U-locks and chains strung around their necks to lock themselves to a slaughter truck carrying animals to the abattoir. Another small group of activists made their way onto the grounds before police closed the gates. A larger group of supporters remained outside the slaughterhouse to bear witness to the animals trapped inside. Local police were about 15 minutes away.

The protest took place just hours after police in London implemented a blanket ban on Extinction Rebellion and affiliated groups protesting in London. Late last night, Animal Rebellion’s peaceful camp at Vauxhall Gardens was cleared by the police, an action that numerous human rights and civil liberties groups, and Members of Parliament, have called a “chilling” affront to democracy.

The animal justice group, in alliance with Extinction Rebellion, is calling for transformative change and the government to transition the UK to a plant-based society. Their actions are to bring attention to the “animal emergency” caused by the worldwide animal agriculture and fishing industries that are a leading cause of species extinction and global greenhouse gas (GHG) emissions, which by current estimates account for at least 37 percent of all GHG emissions.

People living next to the Newman’s facility, which is tucked away in a residential neighborhood less than a mile away from the South Farnborough Infant School, have repeated witnessed workers beating the animals and have reported this to the police, who do not seem to be interested in following up on the allegations, a neighbor told Animal Rebellion member and Sentient Media contributor Billie Savage on video.

“Today, it’s pretty quiet,” he said. “Usually they’re screaming and shouting at the animals. It’s a totally different story when you’re not here.”

Protesters also intended to highlight the poor condition of workers in the slaughter and meat industry, with high rates of injury and overwhelming evidence gathered by undercover investigations of the conditions for both workers and animals in high-pressure environments.

“This protest is about showing that there is no us and them when it comes to humans and the animals that some people eat,” said Shivonne Engen, one of the protesters with Animal Rebellion. “Whether animal or human, we all suffer because of this toxic industry. Whether that be the suffering of the animals who do not want to die, or the destruction of the planet caused by the greenhouse gas emissions from this incredibly inefficient way to feed people, we all need to stop and ask for change.”

Central to Animal Rebellion’s demands is that the government and companies such as Newman’s Abattoir wake up to the fact that that the world is already in a state of climate and ecological emergency wreaking havoc and afflicting millions, and that without urgent and radical action the conditions on which human civilization and other life on Earth depend will be lost within the near future.

“We are grateful to the brave rebels arrested this morning at Newman’s Abattoir, activists who have made a huge sacrifice here today to show our government that people are not willing to sit idly by and let them get away with doing nothing to protect our dying planet,” said Alex Lockwood, a spokesperson for Animal Rebellion. “It was our duty to come here and make these demands – that we must transition to a sustainable food system, and stop exploiting the millions of cows, pigs, sheep, and goats who pass through this slaughterhouse every year. Our activists arrested this morning are heroes and will be remembered for this courage in the face of harsh police tactics.”

The slaughterhouse action is among a two-week rebellion led by Extinction Rebellion to put pressure on the government to act on the climate emergency. It comes after Animal Rebellion successfully occupied Smithfield Meat Market on Monday, October 7, to set up the “Plant-Based Market of 2025,” including fruit, vegetables, and vendors of plant-based alternatives.

Last week, a group of Animal Rebellion activists locked themselves to the Department of the Environment, Farming, and Rural Affairs’ headquarters in central Westminster. The very next day, Rebels gained access to and occupied a Cargill-backed hedge fund, gluing their hands to the doors to draw attention to the companies profiting from and contributing the most to the climate crisis. More protests are planned over the coming days.

“We know we are causing disruption to the daily lives of these workers and we are sorry for that,” said Suzy Bond, a spokesperson for Animal Rebellion. “What I’d like to know is why aren’t UK farmers raging at the Government for their failing industry?”

The demand that corporations such as Newman’s Abattoir help end the animal agriculture and fishing industries comes as several major new reports show how a transition to a plant-based food system focused on growing beans, pulses, fruit, vegetables, and nuts could radically reduce the UK’s carbon footprint and improve its food security.

Animal Rebellion accepts the need to support meat industry workers to transition to the production of alternative products, and calls on the government to immediately implement policies to support this change towards a plant-based food system, and work, for example, with the Vegan Society’s Grow Green Campaign, that helps farmers transition from meat and dairy to veg production.

“No one today would design from scratch a food system that included animals,” said Engen. “This must change now.”