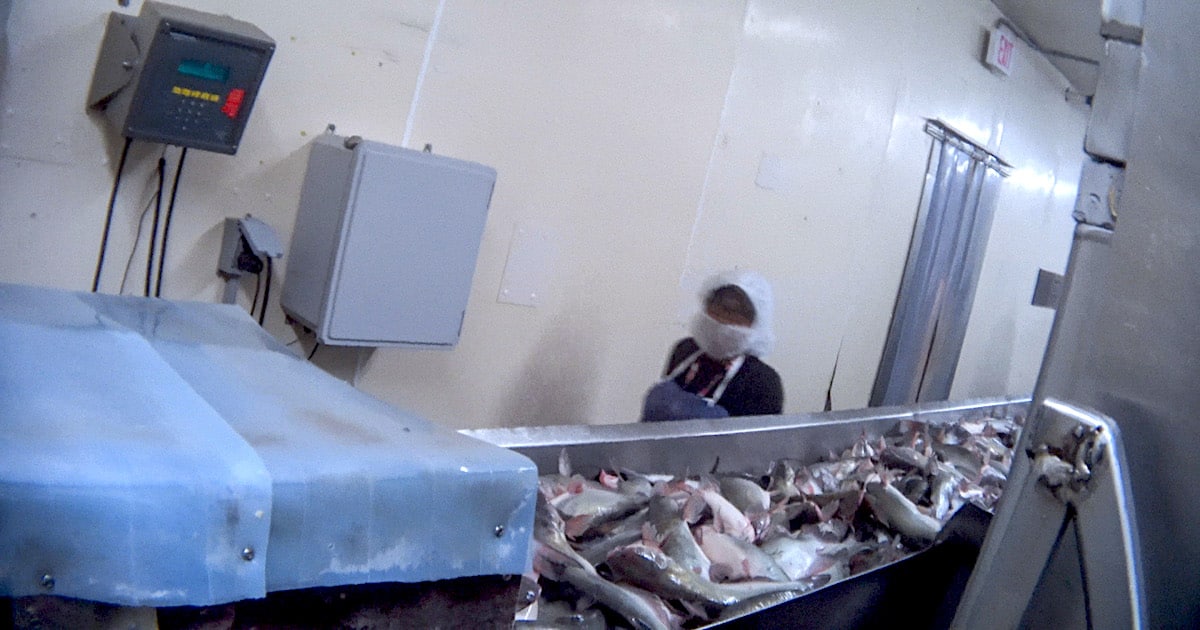 Why the Term ‘Sentient’ Is So Complicated

In the same month the U.S. Senate recognized August as National Catfish Month, Animal Equality, an international animal protection organization that has conducted hundreds of investigations into slaughterhouses and industrial farms, released disturbing footage of an undercover investigation at Simmons Farm Raised Catfish. Simmons, in Yazoo City, Mississippi, is one of the largest USDA-inspected catfish slaughterhouses in the U.S. and a supplier for Cracker Barrel and Captain D’s restaurant chains, as well as Kroger, Save A Lot, and Piggly Wiggly grocery stores.

Video footage revealed catfish piled on overcrowded conveyor belts slowly suffocating as workers take lengthy breaks, fish returning to consciousness after electrical stunning and beheaded while fully awake, and undersized, deformed, or parasite-scarred fish languishing in bins without water for hours before being ground alive and turned into feed for growing catfish. A turtle, bycatch from the netting process that removes the farmed fish from ponds, was tossed onto a conveyor belt loaded with severed fish heads and tried to escape being shredded alive.

The month-long investigation further revealed that these were not isolated incidents, according to Animal Equality’s Director of Investigations Sean Thomas, but that catfish, turtles, and other bycatch fish were routinely left to suffer out of water before being killed.

Animal Equality presented evidence to the Yazoo County Sheriff’s Office and County Prosecutor alleging that Simmons had violated Mississippi law against animal cruelty, which does not exclude fish from legal consideration, according to Kathy Hessler, Director of the Animal Law Clinic at Lewis and Clark School. Hessler further stated in a memo that “scientific research indicates that fish and turtles can suffer and feel pain, and that animals who live in water, fish, in particular, suffer when taken out of water.” Thomas points out that catfish are “robust” fish and can survive for prolonged periods out of water, making their slow suffocation even more excruciating.

The slaughter process itself also causes pain and suffering. The catfish pass through an electrical stunning device intended to incapacitate them prior to decapitation. The fish are heaped on top of each other, and the stunning relies on the current being carried from fish to fish through their crowded bodies. However, videos of the slaughter line show catfish flopping, gasping, and moving their fins after stunning, and many appear to be fully conscious when beheaded and may even maintain consciousness for some time after decapitation.

In one haunting scene, the severed head of a catfish gasps slowly as the conveyor belt passes. Studies in other species of fish have shown that respiration and gasping can persist for up to eight hours after decapitation, and research in rats suggests that brain death does not occur for a least a minute after decapitation—raising questions about how much suffering these conscious catfish endure, and for how long. To that point, Thomas cites a 2020 study showing that catfish are resilient to electrical stunning and most immediately regained consciousness.

The organization has also reached out to companies that purchase catfish from Simmons, and Kroger has initiated an independent investigation into the allegations. Animal Equality also filed consumer complaints with Alabama, Georgia, Louisiana, Mississippi, and Tennessee state attorneys general, stating that Simmons’s claim of “swiftly processing” catfish constitutes unfair or deceptive trade practices. In response, Simmons removed the claim from its website that the fish are processed “within 30 minutes.”

While catfish are not excluded from local animal cruelty laws, they are excluded from the Humane Methods of Livestock Slaughter Act, originally passed in 1958 and the only federal legislation overseeing animal welfare during slaughter. This act requires the “proper treatment and humane handling” of all animals slaughtered in USDA-inspected facilities but omits chickens and fish. According to Hessler, “fish and aquatic animals have no legal protections during transportation to, or within, the slaughter process. Methods of slaughtering fish and other aquatic animals can be quite gruesome, painful to the animals involved, and take significant periods of time.” In 2021, over 193,000 tons of catfish (measured in live weight) have already passed through slaughterhouses, with no oversight for their humane handling or welfare.

However, catfish do hold the unusual status of being the only fish species inspected by the USDA, the federal organization responsible for enforcing the Humane Slaughter Act. This unique regulatory situation was implemented in 2016 to undercut foreign competitors to the U.S.’s home-grown catfish industry. Producers hoped that adding USDA certification to their products would give them an edge in the market. In the states of Mississippi, Alabama, and Arkansas, which collectively use 53,200 acres of water surface for catfish farming, catfish production is frequently marketed as “sustainable, traditional family farms” rather than as an industry bringing in significant sales, to the tune of 371 million dollars in 2020.

Despite catfish’s special status, USDA inspectors don’t assess live fish in slaughterhouses. As Thomas explains, “it’s just for the sanitary conditions under which the fish are packaged. So, if a piece of that fish fell on the floor they would inspect it, but they’re not going over to the other side and watching where the live animals come in and seeing if stunning is occurring or anything like that.” Thomas points out that this sends a potent message to the industry “where the USDA doesn’t recognize them [the catfish] as animals deserving of even the most basic protections.”

But, because USDA inspectors are already present in these facilities, Animal Equality sees this as an opportunity to press for federal oversight of catfish being slaughtered. And as Hessler states, the legislative framework is already present, and “these animals now vastly outnumber their mammal counterparts in the slaughter process, and scientific evidence has clearly shown that they can feel pain and suffer. It is therefore incumbent on us to protect them from unnecessary suffering during the slaughter process.”

To this end, Animal Equality is petitioning Congress to include fish in the Humane Slaughter Act. Thomas admits that this is only a first step in humane oversight for farmed fish, but it would be a crucial move toward recognizing their capacity for pain and suffering and their need for federal protections.

Simmons Farm Raised Catfish and The Catfish Institute could not be reached for comment.

Update: After reviewing the findings of the investigation and reaching out to both the supplier and the Catfish Farmers of America association, Kroger said it found no “direct violations of welfare practices” for catfish at the facility.

“If the Industry Won’t Tell the Truth, We Will”: Animal Equality’s Fight Continues