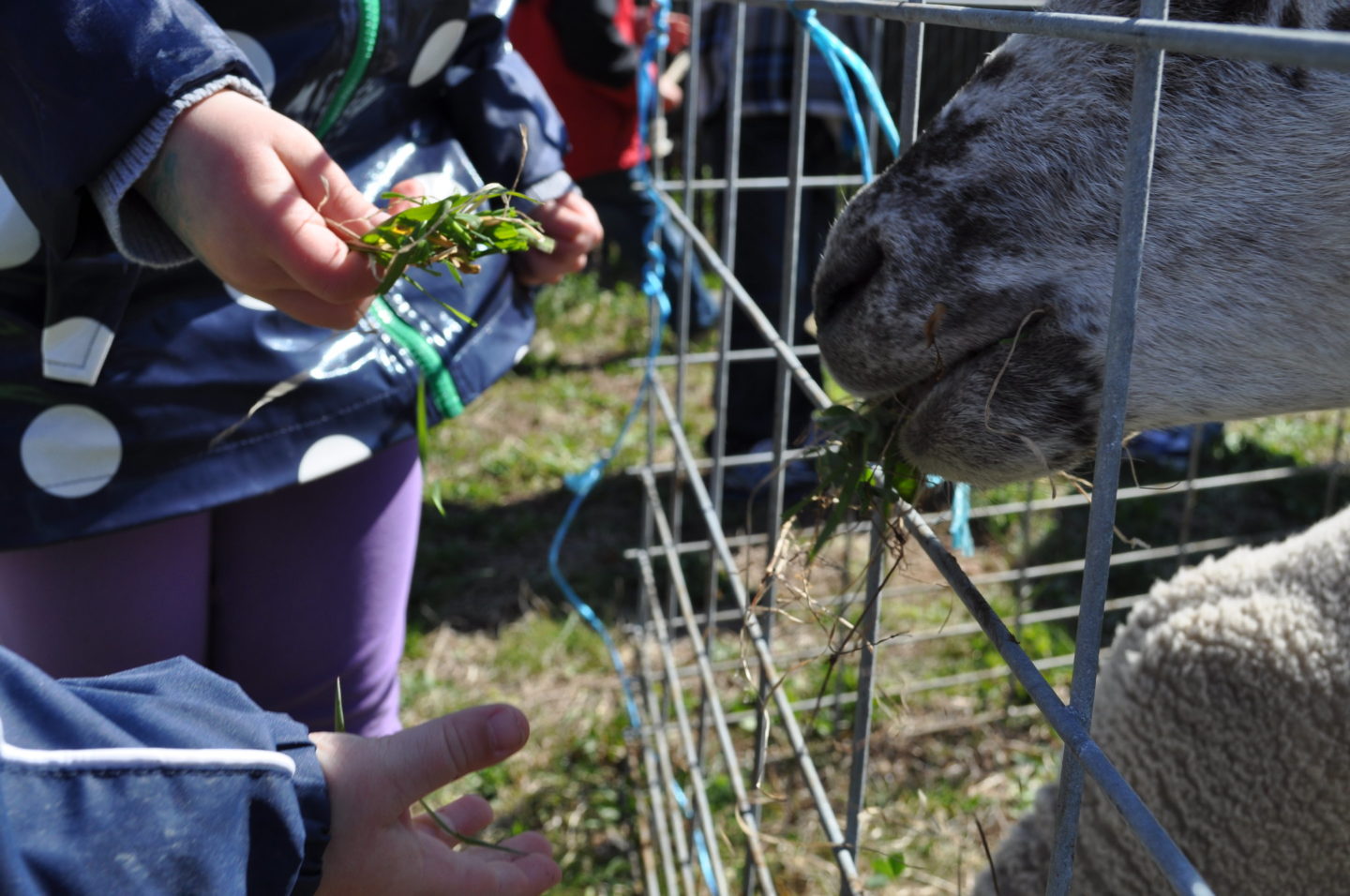 As pandemic lockdown restrictions ease in some parts of North America, allowing people to spend time together at least outdoors, a common springtime activity appears to be gaining greater popularity: petting farms. Parents stuck at home with pent up kids are now flocking to these spaces, many without awareness about what they truly are: “stressful pit stops on the way to the slaughterhouse,” as one animal sanctuary owner, Raelle Schoenrock, describes. “These places market feel-good family experiences, but when you start to look past the cute photo ops, you see a darker reality that can be very upsetting to true animal lovers.”

Most petting farms, says Diane Marsh, co-owner of The Happy Herd Farm Sanctuary in British Columbia, “are in it just for the money.” Babies are bought up at auctions or via online ads, she says, while they are “very young.” Then they are placed in small pens where kids can handle them, and parents can take photos, typically for a fee. “Then in the fall, they ship the survivors off to slaughter.” Marsh currently cares for two pygmy goats at her sanctuary, intercepted from a back-yard butcher who she believes got them from a petting zoo.

Many animal sanctuary owners who now care for former-petting farm animals, lucky enough to avoid slaughter, each tell similar tales of traumatized animals and the problematic places they came from. Wendy Lee Riley, owner of R and R Ranch Sanctuary, also in British Columbia, says the “thrown away” animals she’s taken in from petting farms have proven to be more challenging than others, “due to their extreme fear of humans, grooming and vetting.” She says just regular body checks “are near impossible with these animals because of their response to human touch. As caregivers, this is heartbreaking for us.”

At The Good Place: Farm Rescue and Sanctuary in Manitoba, Cookie, a sheep rescued from a petting farm “does not like people touching her sides,” says sanctuary owner Jennifer Allen. “And when I first got her, she’d kick. So I’m always wondering, what did they do to her? She must not have enjoyed being harassed by children.”

“Kids are rough, and many animals die from rough handling and accidents,” adds Schoenrock, who runs Kismet Creek Farm Sanctuary, also in Manitoba, “especially chicks and bunnies. It’s disturbingly common.” She explains that for farmed animals, most of whom are prey animals, “they need their feet on the ground to escape predators. So, when petting zoos have people—predators—picking up all these little babies—prey—it is likely very scary and stressful.” At most petting farms and zoos, she says, people come first, not the animals. “If a kid wants to hold a bunny, the bunny gets held. No one seems to care what the bunny wants.”

During my recent visit to a petting farm in Manitoba, a two-week-old calf who was taken from his mother in the dairy industry was witnessed being climbed on by a child. Baby goats were being chased around a small pen by kids, with nowhere to hide, and tiny lambs were out in the sun with no available shelter. Baby chicks were also on display, who will be available for purchase slaughtered, at the end of the summer.

“Everyone has this delusion,” says Allen, “that these cute little animals, usually babies, are so happy and well treated, but it’s not the case. Most of them are raised for meat, and [petting farms] are just another way to profit off of them.” Petting farms typically use new baby animals each spring as they are more docile and willing to cooperate during forced interactions with people.

Most people who pay to experience animals in this way believe they are providing a positive and fun experience for their children. Petting farm owners and staff will often appease instinctual concerns of kind-hearted patrons by claiming that animal welfare comes first, or even that the animals have been rescued. “I’d like people to know it’s not as it seems,” Allen insists. Just look at where those animals end up, she says: meat auctions and for sale online.

There is also a level of hypocrisy involved with petting farms, where children enjoy playing with animals they then go home and eat. “Parents aren’t making it about, ‘we’re going to eat these animals,’” says Allen, “because kids would be heartbroken.” Instead, petting farms perpetuate unrealistic ideas of animal farming and broaden the disconnect between the baby animals we love and the butchered animals we eat.

Animals are not amusements or toys or props, and encouraging children to treat them this way at petting farms does a disservice to both. Alternatively, at the animal sanctuaries open to the public, where animals are allowed to safely live their lives, children and adults can interact with farmed animals based exclusively on what the animals want and need. “We are so harsh with rules here,” says Schoenrock of her sanctuary. “This is my animals’ home; their safe space. They should never be scared here, ever.”