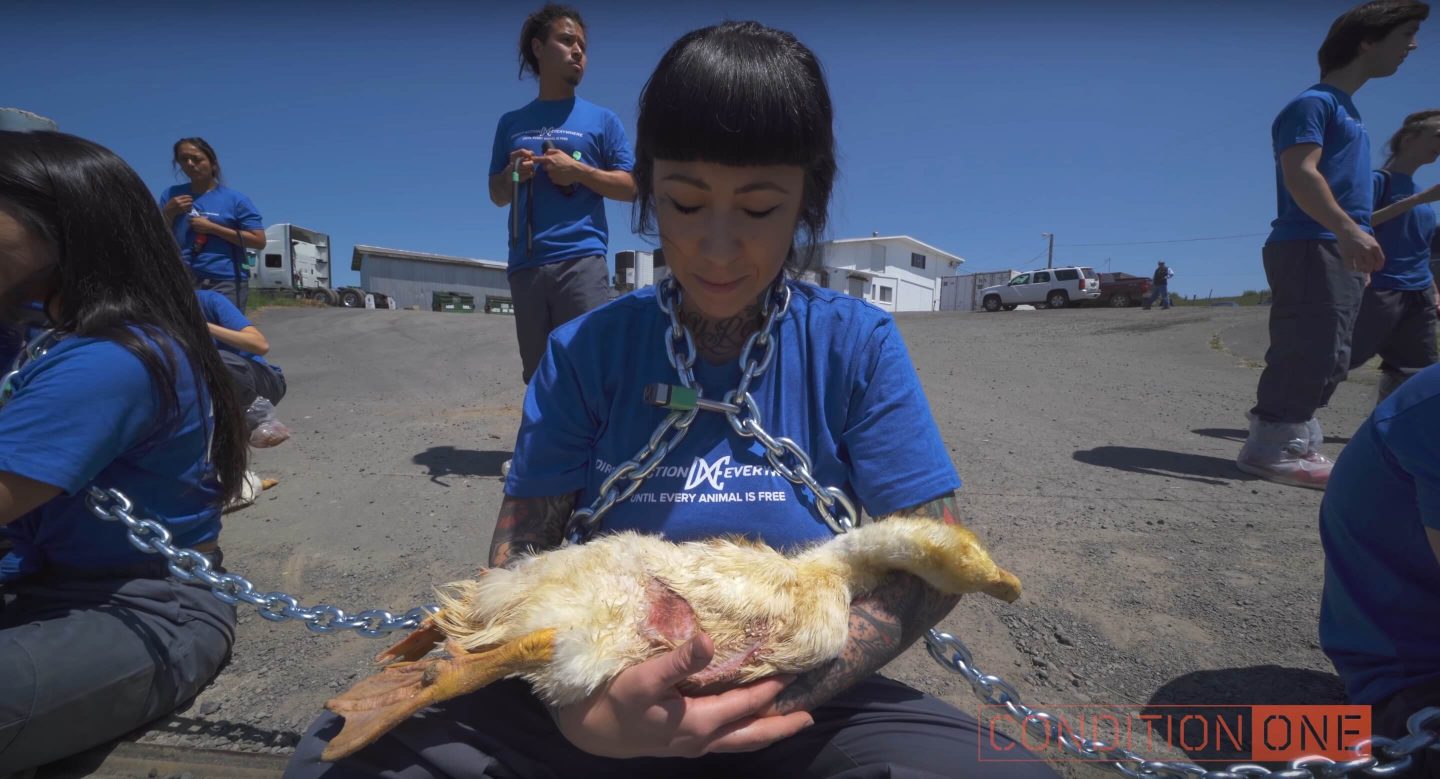 Step inside Monday’s action with these Direct Action Everywhere (DxE) activists as they pull back fencing and gain access to Reichardt Duck Farm in Sonoma County, CA, where one million ducks are slaughtered every year.

The footage shows how well prepared the activists are in response to the highly orchestrated animal cruelty happening inside the farm. Both operations–DxE and the duck farm–operate with frightening levels of efficiency. Activists can be seen using U-locks to lock themselves to the kill line, where ducks’ necks usually hang, limp and lifeless, as they are pulled along a conveyor belt and turned into meat.

Multiple reports confirmed that the activist who appears to be dragged by his neck after a slaughterhouse worker turned on the kill line is in good health. He cleared CT scans and has not suffered any injury to his spine, according to a source close to Sentient Media. One of the cameramen who shot this video said that he put down his camera to help lift the activist off the ground to take the pressure off of his neck and prevent him from choking.

The legal ramifications from this action were overwhelming. As many as 98 activists could be charged with felony counts of conspiracy, breaking and entering, trespassing, and obstruction. On the other side, the California Penal Code 597e gives activists the right to enter any facility where animals are sick, injured, or do not have access to food and water. DxE reports that 32 baby ducks were rescued from the facility. Some ducks, which rescuers found in dumpsters still living, were rushed to veterinarians, according to Glenn Greenwald, who reported from the scene along with a number of other mainstream journalists from the Atlantic, The Intercept, NBC, and CBS.

The demonstration lasted over five hours through the heat of the day on a narrow strip of farm access road that was framed on both sides by ditches of manure runoff five feet wide. “There’s no way to describe that smell,” said Greenwald.

Activists showed up from all over the world to bear witness, including groups from Mexico, South Korea, and Canada. One activist, who flew in for the action from Wyoming the night before said, “We saved 32 lives today. That’s what matters.”