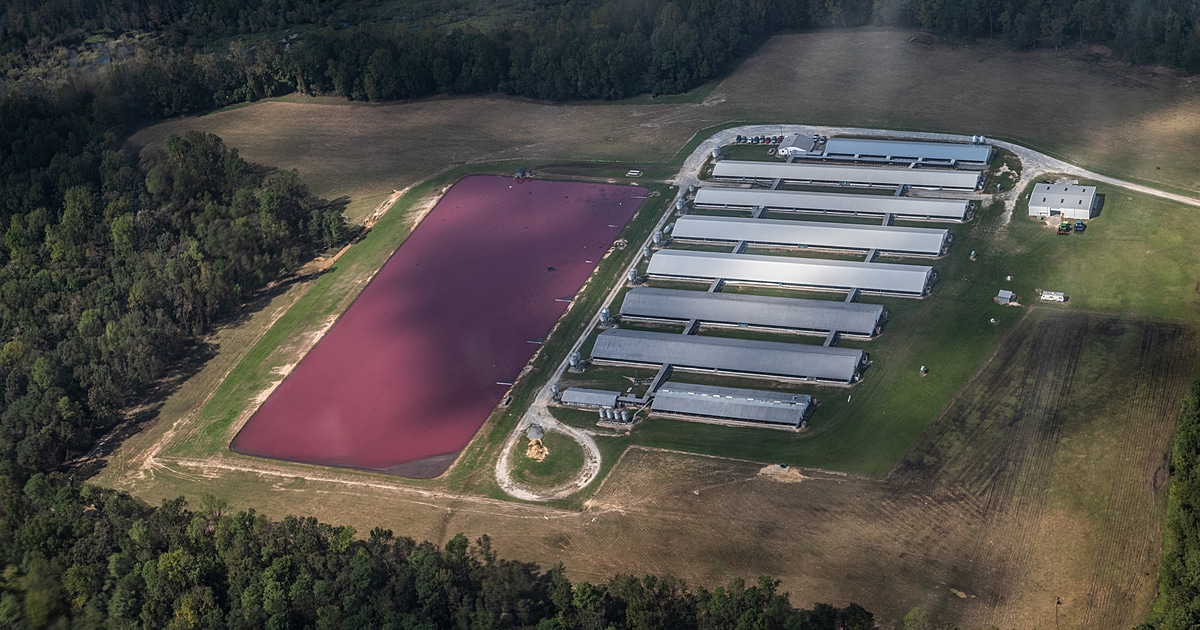 People who buy meat products often do so under the impression that the animal they are eating lived a good life. This couldn’t be further from reality.

What Is a CAFO?

CAFOs are a type of factory farm and can also be referred to as mega farms. A CAFO is an industrial facility where thousands of farmed animals are densely packed in sheds or feed yards to maximize production.

Rather than using a system in which various crops and animals are raised together, one of these facilities will generally use fast-growing breeds of just one animal species, whether that’s pigs, chickens, cows, or sheep. There is no vegetation for the animals to graze on and they are fed intensively grown crops such as soy and corn.

Thanks to the popularity of animal products in today’s world, the animal agriculture sector is becoming increasingly industrialized. Although consumers often don’t realize it, CAFOs supply an estimated 72 percent of the world’s poultry and 55 percent of the world’s pork. By operating more like factories than farms, CAFOs have forced thousands of family farms out of business.

What Is the Purpose of CAFOs?

The purpose of CAFOs is to maximize meat, dairy, and egg production while keeping costs as low as possible. Due to the amount of time, land, and money needed to raise livestock, animal agriculture is quite an inefficient use of resources. CAFOs seek to address this by rearing high densities of fast-growing animals. As we will see, however, this actually creates even more problems.

While cramming farmed animals into sheds might save space, the idea becomes more complex when you realize that they still need to eat. One of the many problems with intensive animal agriculture is that around one-third of the world’s cropland is used to grow animal feed.

What Is CAFO Meat?

CAFO meat is the flesh of any land animal who lived in a CAFO. It includes chicken, pork, and beef, and can be found in a wide range of products. CAFO meat is not labeled honestly, which makes it possible to regularly buy and consume it without even realizing it.

Factory-farmed meat has a high-fat content and lacks nutrients. This is evidenced in “white striping,” excess pockets of fat present in the vast majority of store-brand chicken sold in U.S. supermarkets. CAFO meat can also contain drugs that are harmful to human health.

Producing this meat involves young animals being lined up to be shot, shackled, or gassed, then killed and taken apart on a disassembly line. CAFOs produce so many animals that slaughterhouse workers have to process them at high speeds—for chickens, this is 140 birds per minute—creating an environment that is not only unsafe for the animals but for the workers also.

What Is the Difference Between AFOs and CAFOs?

The U.S. Environmental Protection Agency (EPA) defines Animal Feeding Operations (AFOs) as “agricultural operations where animals are kept and raised in confined situations.” A facility is classed as an AFO if livestock animals are kept there for 45 days or more per year and the food they eat is brought in rather than grown on-site. A CAFO is an AFO that either has large numbers of animals or produces a lot of waste.

Based on numbers, a facility is classed as a CAFO if it has more than 1,000 “animal units.” With animals reduced to a measure of live weight, the number of individuals in what the industry defines as a unit varies depending on the species.

A pig feeding operation, for example, is classed as a CAFO if it holds more than 2,500 pigs who weigh over 55 pounds, or more than 10,000 if they weigh less than that. For poultry units, the threshold is far higher. A single CAFO will hold more than 125,000 broiler chickens or 82,000 laying hens.

AFOs which hold 300–999 animal units (which for broiler chickens can be 37,500–124,999 individuals), will be classed as CAFOs if waste from the facility comes into contact with a body of water. An AFO with any less than 300 animal units will only be classed as a CAFO if, on an individual basis, it is considered to be a significant source of pollutants.

Why Are CAFOs Bad?

Factory farming is arguably the biggest social issue facing the world today. Keeping large numbers of animals in extreme confinement is not only bad for the wellbeing of the farmed animals themselves, but it also significantly impacts the health of people and our planet.

How Are Animals Treated in CAFOs?

In CAFOs, animals are treated like objects. They are given so little moral consideration that painful bodily mutilations such as tail docking and debeaking, often carried out without anesthetic, are standard practices.

Farmed animals are as intelligent and sensitive as the companion animals we share our homes with, yet they often find themselves excluded from animal cruelty laws. Chicks are ground up alive and piglets are slammed onto the floor.

Proponents of intensive animal agriculture claim that animals in factory farms are well cared for. But does being imprisoned in an overcrowded, windowless shed sound like a high quality of life?

What Is in CAFO Manure?

CAFO manure is made up of animal feces, urine, and other raw materials such as bedding or compost. A report by the National Association of Local Boards of Health states that “CAFO manure contains a variety of potential contaminants. It can contain plant nutrients such as nitrogen and phosphorus, pathogens such as E. coli, growth hormones, antibiotics, chemicals used as additives to the manure or to clean equipment, animal blood, silage leachate from corn feed, or copper sulfate used in footbaths for cows.”

What Is in CAFO Waste?

CAFO waste is mostly made up of manure from pigs, cows, or chickens, which contains antibiotics, hormones, heavy metals, chemicals, and dangerous bacteria. In the U.S., farmed animals produce between 3 and 20 times as much raw waste as people. A single CAFO can produce 1.6 million tons of animal manure each year, which will typically be stored in an open-air container called a cesspool or waste lagoon.

How Do CAFOs Pollute Water?

CAFOs pollute water in a number of ways. The fact that they produce far more manure than is needed as fertilizer often results in it being overapplied to land. This allows pollutants such as nitrogen and phosphorus to enter runoff and leach into waterways, killing fish and causing algal blooms. The “dead zone” in the Gulf of Mexico shows just how harmful this can be.

Manure that has been overapplied to fields can also contaminate the groundwater beneath—potentially a source of drinking water—with nitrates. Nitrate poisoning causes low blood oxygen and is a serious health concern, especially in young children.

In addition, CAFOs can pollute water when waste lagoons overflow, waste is flushed through pipes, or when surface water passes through the facility.

How Do CAFOs Pollute Air?

As animal manure from CAFOs decomposes in waste lagoons and is sprayed onto fields, it pollutes the air by releasing toxins and greenhouse gases. These include ammonia, hydrogen sulfide, and methane.

Air pollution-related to food production in agriculture kills 15,900 people in the U.S. each year. Eighty percent of these deaths are linked to animal agriculture.

How Do CAFOs Affect Human Health?

CAFOs primarily affect the health of workers and local residents, but also have far-reaching implications for almost everyone on the planet. Air pollution within CAFOs is a major cause of poor health, with at least 25 percent of confinement workers in the pig industry, for example, thought to suffer from respiratory illness. Areas where there are CAFOs have been linked to higher levels of infant mortality, and local residents report suffering from headaches, nausea, depression, and anxiety.

Mega farms also increase the risk of antibiotic resistance. In some countries around 80 percent of antibiotics are given to farmed animals, usually to promote growth or because of the increased risk of disease arising from poor living conditions. This misuse of medication, in turn, risks making bacteria untreatable. Antibiotic resistance already kills 700,000 people each year, and with that figure expected to rise to 10 million by 2050, it has been named as one of the biggest threats to global health.

Furthermore, CAFOs are the perfect place for dangerous pathogens to spread from animals to humans. Scientists have warned that factory farming could create future pandemics, which may be more deadly than COVID-19.

What Are the Social and Economic Impacts of CAFOs?

People who live near a CAFO find that it impacts every aspect of their daily lives. The noise, foul smell, and bad air are so unbearable that residents usually start to leave, which causes local schools and businesses to close down.

Those who stay behind are denied most of the freedoms associated with a rural lifestyle and find themselves forced to stay indoors.

In addition, CAFOs can be linked to food insecurity. While meat companies grow crops to feed billions of farmed animals, almost 10 percent of people in the world do not have enough food to eat. Research suggests that the crops we currently give to farmed animals could feed an extra 4 billion people.

Which Companies Use CAFOs?

A huge range of stores and brands, including supermarkets and fast-food chains, sell products that come from CAFOs, but a handful of giant multinational food producers dominate the sector.

What Are the Alternatives to CAFOs?

You Can Have an Impact

CAFOs show just how broken our global food systems are. But the good news is that we, as consumers, can have an impact.

Ultimately, industrial animal agriculture is fueled by the popularity of meat. Choosing plant-based foods over meat, dairy, and egg products is a small step that can go a long way toward ending factory farming and all the destruction it causes.