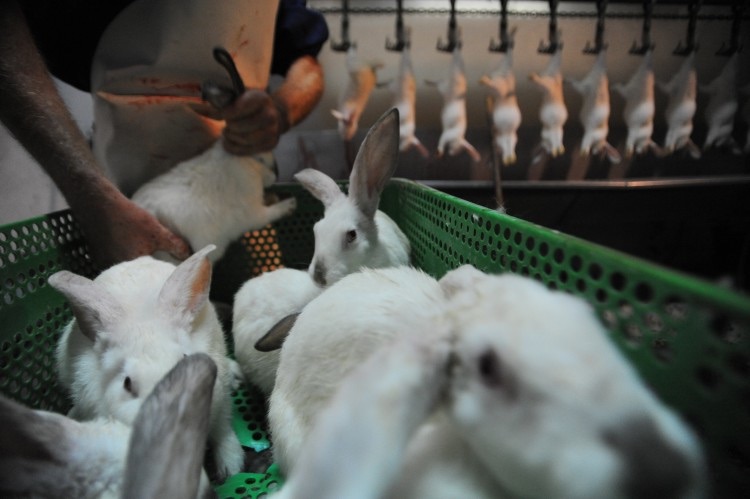 Slaughterhouses in the US continue to kill animals faster and faster. First, it was chickens, who since late last year have been permitted to be killed at a rate of 175 per minute, up from 140. And now it’s pigs, who the Trump administration recently announced may be killed as fast as designated slaughterhouses can handle, and with less USDA supervision. The changes aim to increase productivity and profit while ignoring increased risks to animal welfare and worker safety.

Scott David, a former undercover investigator with Compassion Over Killing, worked inside a pig slaughterhouse during the piloting period of this new high-speed, low-supervised slaughtering program. He wrote about his experience for the Guardian, stating that under the new scheme, “the responsibility of food safety oversight is largely shifted into the hands of slaughter plant employees. Combine this with faster speeds on the kill floor and the result is problems that can – and do – go unnoticed.”

Of those problems, David notes, are workers who, under intense pressure to keep up with high line speeds, were seen “beating, dragging, and electrically prodding pigs to make them move faster.” He documented via hidden camera many sick and injured pigs entering the kill line, enduring “particularly horrific abuses as they were forced to the kill floor in a desperate attempt to keep the slaughter lines moving as fast as possible.”

AJ Albrecht, Senior Policy Advisor & Counsel for Mercy for Animals, agrees. “The new USDA hog slaughter rule is disheartening, not only for the animals but for slaughterhouse workers,” she says. “Eliminating the cap on slaughterhouse line speeds, despite the current breakneck maximum of 1,106 pigs killed per hour, further increases risk of injury in an industry where workers are injured over 2.4 times more frequently than the national average across all industries.” Even worse, she adds, “the new rule dramatically reduces the number of government inspectors at pig slaughterhouses and allows the pork industry to self-police on food safety, further jeopardizing consumers, animals, and workers.” Albrecht calls out the newly weakened line-speed regulations for clearly existing to “maximize profits for the meat industry—with little to no regard for the workers or animals who suffer in the process.”

But the US is not the only country implementing new programs that allow slaughter facilities to kill animals faster than ever before. In Canada, the Modernised Slaughter Inspection Program (MSIP) is currently being piloted, permitting some facilities to implement unlimited kill line speeds for pigs, and like the in the US, putting more responsibility on slaughterhouse employees rather than federal inspectors.

“This program is almost entirely focused on ensuring slaughterhouses can kill as many animals as possible, as quickly as possible, with less oversight by government inspectors,” says Camille Labchuk, executive director of Canadian animal protection group Animal Justice. “When it comes to those who stand to profit from cutting corners, this is never a good thing. The fox is guarding the hen slaughterhouse,” she says.

Animal Justice lawyer Kaitlyn Mitchell adds, “And we’ve seen in the US that this can result in serious risks to public health and to the well-being of animals. The more than 21 million pigs slaughtered for food each year in Canada deserve better.”

Canada already allows for a margin of error regarding pre-slaughter stunning, of 1-4%, depending on the method. That means that at least 210,000 pigs a year may not be properly rendered unconscious upon the first attempt of being electrocuted or gassed. And yet the federal government wants to allow slaughter facilities to slaughter pigs even faster.

Indeed, whether in Canada, the U.S., or elsewhere, prioritizing productivity and profit over animal welfare further demonstrates how the meat, dairy and egg industries objectify and commodify farmed animals. Ignoring risks to both animals and workers in order to kill more and kill faster, is a step backwards for a society so informed about workers’ rights and the sentience of animals (not to mention the environmental impact of animal agriculture). The last thing we need to be doing is rushing to kill more animals.

The Danger of Letting the Animal Agriculture Industry Operate in Secrecy