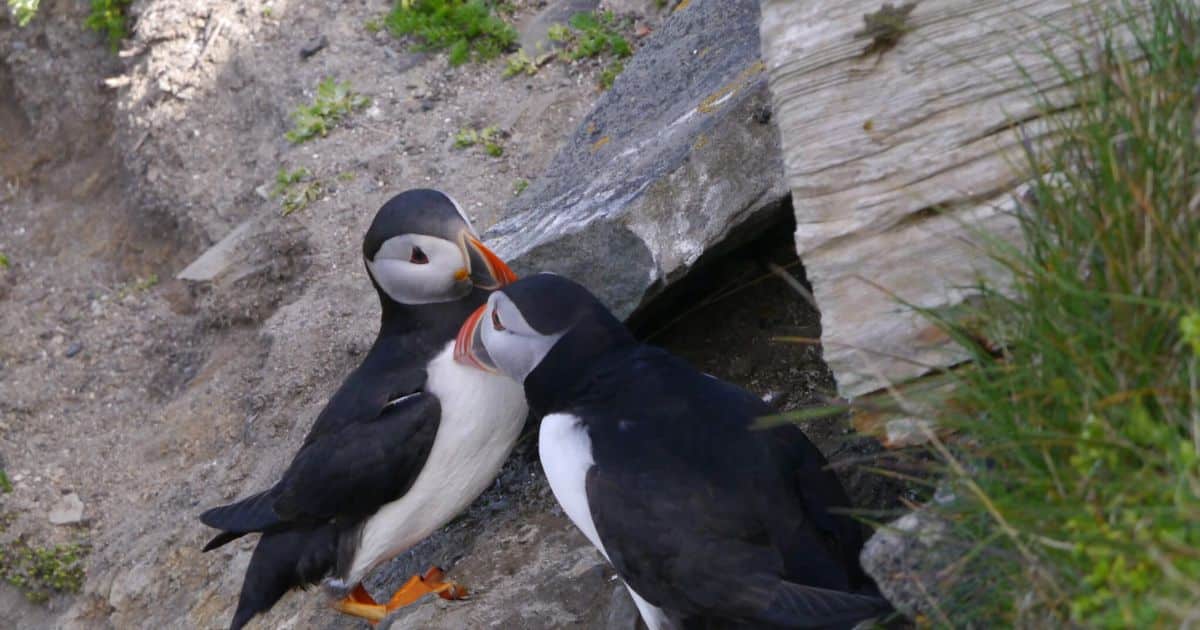 The human fascination with finding our one true love to spend the rest of our lives with has caused us to be especially interested in non-human animals that also behave this way. But even among creatures that mate for life, there is a huge variety of relationship types that mirror the gamut of the human experience — from monogamy to open relationships to dating around. Regardless of the type of relationship these animals display, the relationships enable the animals to perpetuate their species, a goal that we as humans can either help with or make more complicated.

When we think of nonhuman animals in love, the first pairing that likely comes to mind is lovebirds. After all, the word “love” is in their name. Love birds in a pair often feed their partner. There are nine species of love birds, and monogamy is an essential part of social stability within their flocks. If one of the birds in a pairing goes missing or dies, the other bird will act erratically. Love birds that live alone as pets exhibit similar behaviors to these pining wild birds.

Oldfield mice mate for life, making them unique among rodents. They are also more nurturing than other rodent species. In fact, both the father and the mother mouse will work together to build an elaborate nest and care for their young. Even the mice’s closest known relative, deer mice, are much more promiscuous, having multiple partners over their lifetime.

Atlantic puffins, native to areas in the North Atlantic such as Eastern Canada, New England and Western Europe, are small and distinctive black and white birds. Puffins can dive up to 200 feet underwater in search of fish, sometimes carrying more than one fish at a time back to the surface. Puffins are monogamous. They mate with the same partner each year starting at around five years old. Although solitary at sea, puffins reunite at breeding grounds, reconnecting through mating rituals with their partner. In fact, male and female puffins take turns incubating their egg until the baby puffin hatches and makes its way to the ocean. The puffin can live as long as 30 years. In 2019, puffins were the first seabird documented to use a tool, when they were observed scratching themselves with sticks.

Coyotes are often thought of as conniving creatures that can’t be trusted. The reality, however, is that they are extremely loyal to their monogamous mate and will very rarely stray. This monogamy has helped coyotes thrive in urban areas, since pups that have attention and care from both parents are more likely to survive than those that only have one parent present to protect and feed them. When the female coyote is in estrus and able to mate, the two will spend virtually all their time together foraging, resting, playing and running.

Finding love as a seahorse can not only be difficult but downright dangerous. This is because of their dependence on camouflage as a primary predator deterrent, their poor swimming skills and their low population densities. The challenges associated with finding love as a seahorse cause most in their species to behave monogamously, as once that special seahorse has been found, sticking with them and mating repeatedly provides a greater chance for reproductive success than continuing the search.

Dik-diks are small antelopes native to a few countries in sub-Saharan Africa. They are highly adapted to the dry bush country that they make their home. The greatest threat to dik-diks are humans, who use their bones for jewelry and their skin for suede gloves. Dik-diks live in monogamous pairs on large areas of land able to accommodate their grazing needs. Their monogamy is perpetuated by the fact that offspring leave as yearlings and must seek their own territory, often made available by the death of one or a pair of older dik-diks. This maintains an equal adult sex ratio.

Bald eagles are predatory raptors native to North America, known for their large size and iconic coloring and beak. Female bald eagles are larger than males. They spend most of their time alone, both during winters and migration, but keep the same breeding partner year after year. These monogamous couples return each year to nest and raise an offspring. Some even nest in the same place every year. Bald eagles continuously add sticks to their shared nest, sometimes resulting in very large nests. One particularly large example was documented in Vermilion, Ohio, measuring at 9 feet across and nearly 12 feet high. These birds are loyal to one another and remain with whomever they mated with in their first mating season. However, if they are unable to find their partner or if their partner dies, they will seek a new mate.

Albatrosses challenge the traditional understanding of monogamous relationships. They will travel thousands of miles every year and yet still return to the same place and partner when it comes time to mate and raise their young. Both parents also play an equal part in raising the young birds. However, while the birds maintain a committed lifelong relationship with their primary partners, they are also likely to mate with other birds. The arrangement is similar to a human “open relationship” in which both partners are committed to each other but also explore opportunities with other individuals outside their pairing.

Many point to beavers as an example of a monogamous relationship in nature because their familial units are typically made up of two parents and their offspring. However, this belief is far from an accurate representation of their mating habits. Of the beaver populations studied, more than half of the litters were sired by more than two male beavers, one analysis showed. Beavers were also likely to mate with other individuals from neighboring colonies.

Gibbons, usually found in Southeast Asia, are a broad group of small apes of which there are several recognized species. Like in other primates, it appears that monogamy was developed as a defensive trait to prevent infanticide and defend territory. Gibbons were often looked at historically as the perfect example of a monogamous ape. After all, couples spend countless hours grooming each other and raising their young together. They live in family groups that include monogamous sexual partners and their offspring. Gibbons even engage in unique bonding calls that also serve as territorial displays, during which males and females have specific parts of the song. Yet as with many socially monogamous species that raise children with one partner, closer observation has revealed that gibbons do mate outside their pairing and can also change their partners.

Swans are predominantly monogamous birds that will spend years, or even a lifetime, with a single mate. However, as is the case with human relationships, swan pairs often fall victim to breakups and adultery. In fact, among Australian black swans, an estimated 1 in 7 eggs are raised by a male swan that is not genetically related to the offspring, unbeknownst to the male swan, apparently. Reasons for seeking out a new partner among swans include nest failure, a poor breeding season and the death of one of the swans. Generally, when a separation does take place the female swan has an easier time finding a new mate, as she will rejoin a flock, whereas the male will stay within their breeding territory and hope to attract a mate.

Shingleback skinks are bulky, dark brown lizards with dark blue tongues and bright pink mouths.  Their natural habitat is in southern Australia, and they are common in New South Wales. Their offspring are ready to look after themselves shortly after birth, negating the need for co-parenting. Nonetheless, though these lizards are solitary for 9 months of the year, they return to their monogamous pairing year after year. In fact, it is not an uncommon sight in New South Wales to see pairs crossing the road together, with the male following the female. This social monogamy has been known to last for over 10 years and is very uncommon among lizards.  Even after death, their bond can remain, as skinks have been noted to remain with partners killed on roadsides for several days, nudging and licking their fallen mates.

Scarlet macaws once covered the skies of Central America with their colorful feathers, reproducing happily with their partners in monogamous pairs. Today, though still monogamous, there are far fewer scarlet macaws in the wild, due in large part to the pet trade and habitat destruction. Still, they are considered monogamous birds that will have one partner for several years and raise young together. They will swap out partners every few years.

Sandhill cranes are a true love story as once a pair has been made they will mate for life. During the mating season, cranes will dance together and call out to one another as a bonding exercise. Sometimes their dancing involves props and they will throw sticks or plants into the air. Once the birds have nested and they lay eggs, the male crane will watch over the nest. When the young are old enough the whole family will migrate together.

Red foxes are often, but not always, monogamous. Sometimes they will live in pairs with one male mating with one female. However, sometimes a male will live in a den with several female foxes with whom he mates. In still other situations, a pair of foxes will coexist with a nanny that is not breeding but lives with the breeding pair and their offspring.

The importance of having a partner is not unique to the human experience — it’s something that animals of a variety of species can appreciate. Their ability to locate and maintain these important relationships can depend upon a number of factors, including the efforts that we make to conserve their habitats. Currently, one of the major drivers of deforestation in the Amazon rainforest is animal agriculture. This deforestation and habitat destruction around the world make it more difficult for animals to form or return to breeding pairs. You can take a stand for these pairs by reducing or eliminating animal products from your diet.

What Do Humans Owe to Wildlife in Urban Spaces?