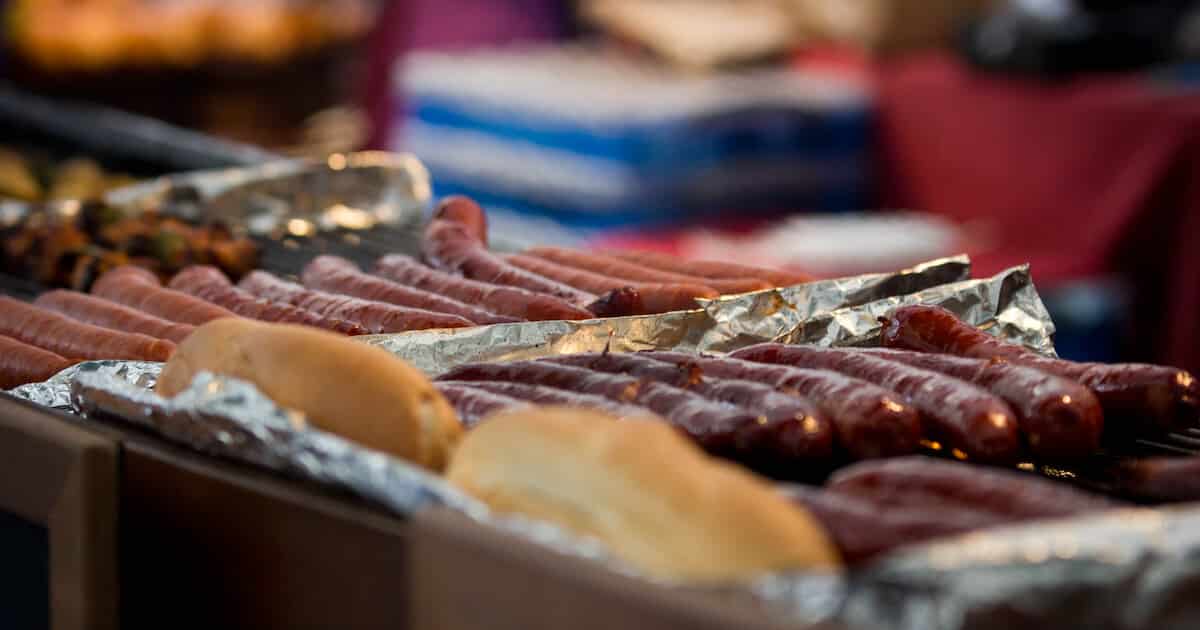 Hot dogs are a popular American staple of summer cookouts and other social gatherings. Also known as frankfurters, franks, or wieners, the hot dog is a cooked sausage made of highly processed meat that allows for less desirable cuts of meat to be rebranded. These cuts are ground into a slurry with a significant amount of fat and water, packed with seasoning and smoke flavor, and cooked into hand-length tubes to be sold as hot dogs.

Hot dogs comprised about 3.4 percent of total meat sales in the U.S. in the last quarter of 2021: less popular than dinner sausage, and slightly more popular than breakfast sausages. The four brands of refrigerated hot dogs with the most sales in the U.S. were Bar-S (a brand of Sigma Alimentos, a subsidiary of Alfa), Ball Park (a Tyson Foods brand), Oscar Mayer (a subsidiary of Kraft Heinz), and John Morrell (a Smithfield Foods brand, a subsidiary of WH Group of China), moving a total of 104.2 million units in 12 weeks ending in late January 2022.

In the United States, other well-known brands of hot dogs include Hebrew National (ConAgra Brands), Nathan’s (mostly made by Smithfield Foods), and store brands including Sam’s Choice, and labels sold by Trader Joe’s and Whole Foods.

What Are Hot Dogs Made Of?

Traditionally, hot dogs are made of red meat, pork or veal, though there are variations of the cooked sausage that include grains. More modern hot dogs can instead be made of vegetable protein such as textured soy. There are even chicken and turkey hot dogs.

Hot dogs are often made of combinations of different meats, including poultry. However, some of the most popular types of hot dogs in the United States are 100 percent beef, turkey, chicken, or pork. Also popular are corn dogs, hot dogs with cheese, and vegetarian hot dogs.

Beef, pork, and poultry are turned into finely chopped meat and pressed into a meat slurry or batter. About 30 percent of the hot dog is fat, and fat and water mixed together make up about 50 percent. The slurry is usually seasoned with spices like paprika, red pepper, sugar or corn syrup, salt, black pepper, and sodium nitrite. Filler for hot dogs can include nonfat dried milk and powdered bone meal.

The meat used for hot dogs is known as meat trimmings. Rather than discard the meat that is left over after the most choice cuts of an animal carcass are sent along to be served a la carte, the industry scrapes it to the bone (sometimes including the bone) and cooks it before turning it into a thick batter.

Meat from an animal’s head, feet, liver, fatty tissue, lower-grade muscle, blood, and more can be included in what is described as “meat trimmings,” or the primary source of meat for hot dogs. If the ingredient list contains “byproducts” or “variety meats,” the meat may come from the snout, lips, eyes, or brains.

What Part of the Pig Are Hot Dogs Made Of?

Whether the animal parts are from pigs, cows, or turkeys, research led by high-school student Brigid Prayson in 2008 found that meat in store-bought hot dogs was largely made up of body parts other than skeletal muscle, which is what people mean when they talk about eating meat. These body parts included “bone, collagen, blood vessels, plant material, peripheral nerve, adipose tissue (fat), cartilage, and skin.” The study found that most brands tested were “more than 50 percent water by weight” and were made of less than 10 percent meat, defined as skeletal muscle.

What’s in a Beef Hot Dog?

A beef hot dog must be made only from cows and not include byproducts, according to the USDA. Because of precautions against bovine spongiform encephalopathy, or mad cow disease, beef franks, unlike franks made with poultry or pork meats, cannot be made with mechanically separated beef.

What Gross Things Are in Hot Dogs?

What people think of as acceptable to eat is highly personal, and yet there are types of food that are commonly considered to be more disgusting than others. Offal, also known as byproducts or variety meats, is a less popular meat ingredient in hot dogs that has been used in animal feed and for industrial uses.

According to the USDA, hot dogs made with byproducts or variety meats must consist of at least 15 percent skeletal muscle. The byproducts used must be named specifically, such as heart, kidney, or liver, as well as the animal from which they came. Industry websites say that offal is an uncommon hot dog ingredient.

Even though a hot dog may be listed as containing beef, pork, chicken or some other simple-sounding meat as a primary ingredient, how the meat is produced is a complicated technical feat. Using special machinery, “pieces of meat are scraped, shaved or pressed off the bone” of beef and pork bones in a process known as advanced meat recovery (AMR). Once the meat has more than a certain amount of calcium, that means there are too many bits of bones in the meat and it is now considered “mechanically separated” meat.

This gristly meat is cooked and churned into a paste, at which point other ingredients are added. As Yasmin Tayag writes for Inverse, hot dogs are the result of a blend of “mashed-up pork and beef trimmings that are swirled together with processed chicken trimmings, food starch, flavorings, corn syrup, and lots of water.” Tayag explains that another ingredient added to hot dogs is sodium nitrite, which gives the meat-slurry-in-a-tube its pink color, making it look fresh and familiar to consumers. Without sodium nitrite, meats become an unappetizing gray color, though they are also less likely to cause cancer, according to a nutritionist quoted by April Benshosan. The temperature at which nitrites are cooked is an important aspect of their link to cancer.

The meat paste is then automatically pushed into clear, sock-like tubes made of cellulose that resemble plastic film. Casings are sometimes made with actual animal intestines, but most hot dogs are now skinless in their final form.

The frankfurters are cooked in their casings and rinsed with water. Even though they are precooked, the USDA website recommends that consumers heat hot dogs until they are “steaming hot” as a matter of food safety.

The hot dogs are then cooled in a water shower, according to the National Hot Dog and Sausage Council website. An automatic peeler strips the cellulose casings from the hot dogs.

Package and Box for Distribution

The hot dogs are inspected and sealed into vacuum-packed plastic film with the assistance of conveyor belts and packaging equipment. Finally, within hours of starting as meat trimmings, the hot dogs are boxed and loaded into storage coolers and refrigerated trucks.

The Truth About Hot Dogs

There is not a lot of actual meat in hot dogs, even when it’s listed as a top ingredient. They are mostly water and fat, with a tiny bit of meat in the traditional sense. The meat that is used is lower-grade and has been turned into sludge.

You can consider the people who work at the factories, which are part of the meat processing industry. Magaly Licolli has given The Counter’s Olivia Paschal an oral history of new and effective models of organizing immigrant workers who operate meatpacking and processing plants for companies like Tyson. In seeking to improve the working conditions at meat factories, Licolli is inspired in part by the animal welfare model in which consumers hold companies accountable for the way food is made. Find more such stories linked in this article by Errol Schweizer about how meat processing workers and U.S. lawmakers are pushing for workplace protections.