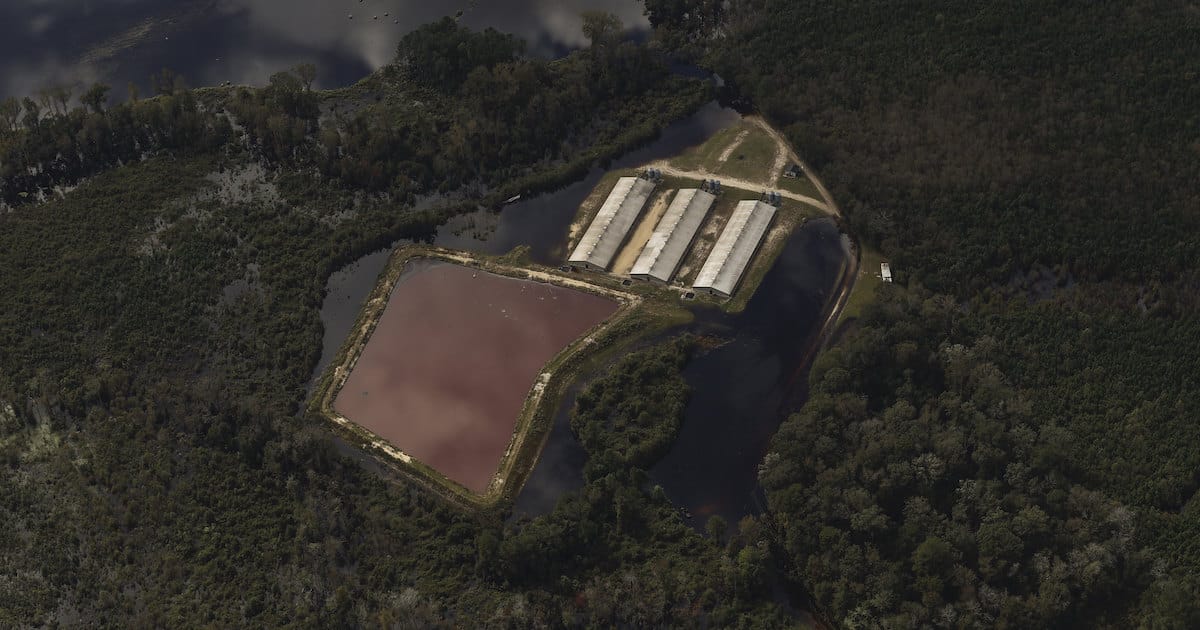 A new study has revealed that air pollution coming from agriculture leads to 17,900 U.S. deaths every year. Of the 15,900 deaths related to food production, the vast majority—80 percent—were linked to animal-based foods, “both directly from animal production and indirectly from growing animal feed.”

The study’s authors point out that poor air quality is “the largest environmental health risk in the United States.” But the food system is often ignored as one of the main sources of air pollution. They explain that in recent years, “air quality has been largely absent from discussions about the health and environmental impacts of food.”

Not only has our food system largely gone ignored in discussions of how to address air quality, but Controlled Animal Feeding Operations (CAFOs), commonly known as factory farms, do not even have to report their emissions. This often leaves the people living near these industrialized farms, many of whom are residents of low-income areas and communities of color, facing health complications from air pollution at disproportionately higher rates than the rest of the country.

The increasingly harmful presence of factory farms and slaughterhouses in communities of color occurred over the past century as farmland once owned by people of color was taken from them. In 1910, 14 percent of farm owner-operators were Black or African American, but by 2012 that figure dropped to 1.5 percent, according to the Food Integrity Campaign. The FIC notes that much of this loss occurred during the 1950s, as farmers of color were denied federal loans and Black farmers, in particular, lost millions of acres of land, facing lynchings and other threats of racial violence. “Using USDA census data, researchers have found that today white people represent the overwhelming majority of farm owners, while people of color form the majority of agricultural laborers,” writes FIC.

In 2018, Congress passed the Fair Agricultural Reporting Method (FARM) Act, which exempted factory farms from reporting emissions to the federal Environmental Protection Agency under the Comprehensive Environmental Response, Compensation, and Liability Act (CERCLA). In June 2019, they were also exempted from reporting to local and state authorities, which was required under the Emergency Planning and Community Right-to-Know Act (EPCRA).

This move came despite what years of research has shown about the dangers of air pollution from animal agriculture. In 2019, a reporter at the Food & Environment Reporting Network (FERN), Leah Douglas, wrote about previous studies detailing the impacts of exposure to emissions from farms, including disproportionate suffering from lung disease, asthma, mood disorders, and more. Since the methane and nitrous oxide released by animal manure is more potent than the “more commonly maligned” greenhouse gas, carbon dioxide, Douglas notes that “experts who work on this issue say that given their serious risk to human health and the environment, emissions from farms should be monitored and regulated like those from other polluting industries.”

On July 1, 2019, a lawsuit was filed against the EPA by a coalition of environmental and animal protection organizations trying to require farms to report their emissions under the EPCRA. The complaint supplemented a suit filed in September 2018, “challenging the EPA’s earlier attempts to hamper the law’s mandatory pollution reporting obligations.”

“Emissions generated from animal waste at CAFOs are highly toxic and are sickening communities across the country. Exposure to ammonia and hydrogen sulfide released from the highly concentrated animal waste produced at CAFOs causes a multitude of health problems, including, but not limited to, respiratory problems, nasal and eye irritation, headaches, nausea, and even death,” the 2019 complaint states, alleging that the EPA’s action could “completely eliminating” community protections that were in place under the EPCRA.

The complaint also notes that the majority of U.S. livestock operations are too small to reach levels of emissions that would trigger reporting requirements under the EPCRA, which leaves only the largest farms “which confine thousands or millions of food-producing animals each” subject to the EPCRA.

Factory farms and slaughterhouses are often located in or near communities of color and low-income areas, and the pollution these industrial facilities generate impacts the people living there.

In the landmark report “The Industrialization of Agriculture and Environmental Racism: A Deadly Combination Affecting Neighborhoods and the Dinner Table,” David H. Harris Jr. writes that it is “economic neglect” making communities of color and low-income areas targets of pollution and environmental harm caused by industrial agribusiness.

Harris Jr. noted the pig industry’s growth in North Carolina as a key example. The number of pigs on North Carolina farms increased from 3.7 million at the end of 1991 to more than 9.5 in 1997, making the state the second-largest pig producer in the country. While factory farms containing 2,000 or more pigs comprised only 9.3 percent of producers, they owned 90 percent of the state’s pig population, Harris Jr. reported. The majority of those large farms were located in rural communities of Eastern North Carolina, also home to the state’s largest communities of color.

A 2005 survey of North Carolina schools revealed that around 37 percent of Black and Brown students, as well as just under half of the students in reduced lunch programs, went to schools located an average of 4.9 miles from industrial pig farms. Schools with higher numbers of white and higher-income students were located farther from factory farms, an average of 10.8 miles away.

The North Carolina Pork Council says the state is home to 2,100 farms that are raising nine million pigs per year in a “safe and responsible manner.” Yet, North Carolina residents have been trying to fight the environmental impacts of factory farms on their communities for a long time.

The new study linking thousands of deaths to air pollution from factory farms lists Duplin County in Eastern North Carolina among the counties highly impacted—where 48 percent of residents are people of color and 26 percent of residents are living below the poverty line. According to the study, air pollution from Duplin County farms is linked to around 98 early deaths per year, and the vast majority of them (89) are tied to emissions caused by pig farming.

But the damage doesn’t stop there. In 2018, Duke University scientists found that North Carolina communities near industrial pig farms experienced more deaths from kidney disease, anemia, and sepsis as well as higher rates of infant mortality.

While the pig industry is dominant in North Carolina, other forms of animal agriculture have a large presence, too. In July 2020, the Environmental Working Group reported that since 2012, three predominantly Black, Native American, and Latino counties in North Carolina—Duplin, Sampson, and Robeson—added 30 million chickens and turkeys to the region. These counties were already home to most of the state’s industrial pig farms.

A bill passed by the North Carolina Senate, now making its way to the House, could soon make it easier for farms to obtain permits allowing the conversion of liquid waste to natural gas. “Opponents argue the general permit process will make it harder for environmental groups and the neighbors of those farms to be heard. They say biogas production brings with it its own pollutants and the operations don’t get rid of the stench emanating from the waste pits,” Associated Press reports.

Plant-Based Foods Could Save Lives

The study concluded that farms could reduce mortality related to air pollution through changes in their production methods, including management of livestock waste and fertilizer application, but the researchers also suggested that a dietary shift toward plant-based foods could reduce agricultural air quality-related deaths by 68-83 percent.

And while the researchers found that substituting poultry in place of red meat could prevent over 6,000 deaths annually, they go on to say that shifts to vegetarian, vegan, or flexitarian diets would result in 10,700-13,100 fewer deaths per year.