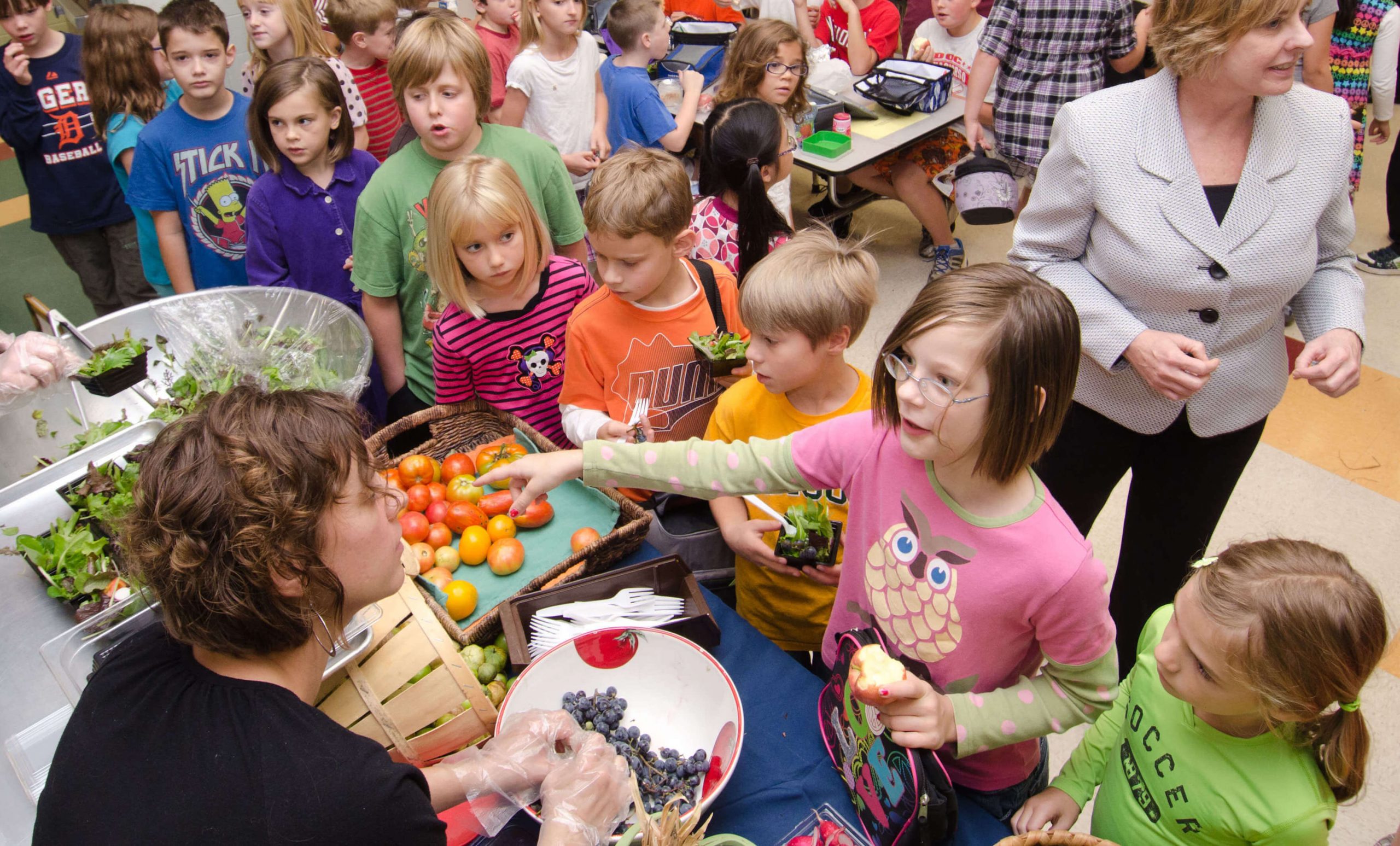 Maria Solanki, the founder of KING Charter Schools, a vegan K-8 in Pinellas County, Florida, wants to become the first charter school in America to take milk off the menu and serve its students 100% plant-based meals—but not without a fight.

The United States Department of Agriculture (USDA), which subsidized meals for public school students with the $13.6-billion National School Lunch and School Breakfast programs, requires lunch programs to serve milk as part of the new high-fat, low-veggie diet that Secretary of Agriculture Sonny Perdue introduced a week after his appointment in 2017.

According to Federal Register regulations, eligible school breakfast and lunch programs “must not directly or indirectly restrict the sale or marketing of fluid milk at any time or in any place on school premises or at any school-sponsored event.”

KING will not be able to receive federal meal reimbursements until it makes milk available to students. Neither will any school teaching its students about the horrible lives dairy cows live on factory farms.

The celebrity-backed got milk? campaign returned shortly after Perdue announced his new nutrition standards for school meals. Beginning in 1994, the original got milk? campaign, created by the California Milk Processing Board, featured wide-grinned, white-mustached celebrities encouraging kids to drink milk so they will grow up to be big and strong. Turns out, kids don’t need milk to do that.

Still, there appears to be no better way to market a glass of milk than with a familiar face. The latest got milk? campaign was shown in two different languages, targeting millennial families and Spanish-speakers, who both historically drink a lot of milk. More than 1 in 5 students in U.S. public schools are Latino.

Being a kid is tough, but presenting milk as the best option for every kid regardless of race and socioeconomic status is incredibly misguided on the part of advertisers, American public schools, and the dairy industry. Each kid comes with his or her own individual health needs. For example, U.S. Latinos and African Americans have a greater risk of developing Type 2 diabetes than whites, especially in lower-income communities.

The National Lunch Program currently provides each student, regardless of health, race, or dietary requirements, with dairy milk twice a day every day. Obviously, it’s up to the kids whether or not they drink it. As recently as 2010, school lunchrooms were required to give students water. For decades, the only beverage kids were routinely offered was milk.

In September, the American Medical Association (AMA) released a memo instructing the USDA to change its nutritional standards for 2020. The standards recommend students drink two cartons of milk every day, with the option of yogurt for breakfast and a cheese stick for lunch. The AMA fired back, citing heightened levels of lactose intolerance in African Americans and Asians and calling for a movement away from dairy in school lunch programs.

According to the memo, the AMA will…

Solanki believes going vegan at school will help students maintain healthy, happy lives at home. “With proper nutritionists to help build out our school menus, the students will by no means be lacking in nutrition,” she writes on the GoFundMe page for KING Charter Schools.

The current lunch program’s nutritional standards are a marked change from Obama-era dietary recommendations. In 2010, the Healthy, Hunger-Free Kids Act directed the USDA to rewrite its nutritional standards for the first time in 15 years to include more fruits, vegetables, and whole grains. It also gave schools more money if they met the new nutrition standards. Chocolate milk, considered a staple of American lunchrooms, had to be fat-free and cheese on cheeseburgers needed to be low in sodium. Dairy producers saw this as an attack on dairy.

Dairy farmers are dumping out milk by the hundreds of millions of gallons, and the USDA is trying to rescue them by force-feeding public school kids dairy.

“We know how harmful it is for kids to be drinking milk,” Solanki told VegNews. The high fat content in milk and other animal products is a large contributor to obesity, heart problems, high cholesterol, and high blood pressure. Yet, high-fat and processed foods like chocolate milk, white bread, and pizza show up on school menus—where many of America’s 30 million public school kids eat two out of three meals every day.

“I wouldn’t be as big as I am today without chocolate milk,” Perdue told Bloomberg. It’s unclear whether he was talking about his ties to the dairy industry or his potbelly, but there’s no doubt someone in that room full of reporters laughed. Perdue made his name selling grain to livestock farmers and consulting for the $200-billion U.S. dairy industry, which has been in crisis for the past 10 years, due in large part to the success of plant-based milk.

Solanki says the worst part about applying for federal meal reimbursement is that the USDA refers to plant-based milk as a beverage, not as milk. Because the nutritional value of plant-based milk is closer to dairy milk than a regular “beverage,” plant-based milk simply doesn’t fit into the USDA’s current standards, making it essentially impossible for plant-based milk to get coverage in school lunch programs.

“The school is not required to take the reimbursement,” said Solanki, “but by denying it, we take the risk of falling into debt.”

Starting a school is tough. Here’s what you can do to help.

Solanki is currently petitioning the USDA to change the cow’s milk requirement for the National School Lunch and School Breakfast programs. But she may be up against Goliath. For the record, milk hasn’t moved off public school menus since the meal program was introduced by President Harry Truman in 1946.

Later this year, all U.S. public schools will begin expanding their milk options, offering low-fat chocolate and strawberry-flavored milk starting in July. The USDA has yet to make a comment on plant-based beverages–by the books, the healthiest and only vegan option–for public schools. But the marketing campaigns and industry-speak may be enough to convince Solanki that her plant-based lunchroom won’t be getting federal funding anytime soon.

That’s okay, she says. “Starting our own school, no matter how small we start, is the first step to creating the change we want.”