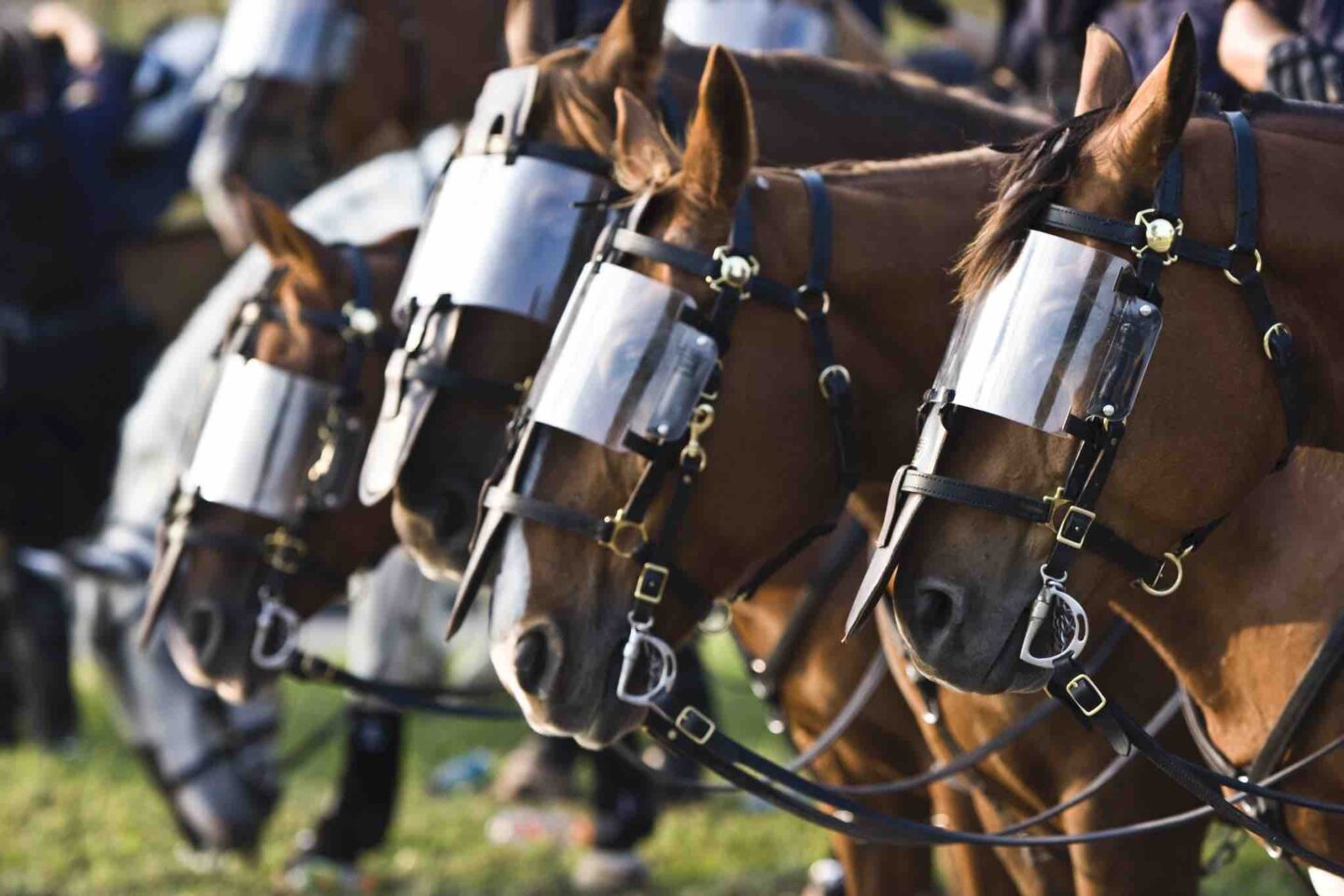 As protestors take to the streets around much of the globe, fighting against systemic racism and the oppression of Black people, police forces in some areas have taken to utilizing horses to control and intimidate those protesting. For one Atlanta, Georgia-based animal and human rights activist, the symbolism, as well as the added oppression of animals, are troubling.

“People see police on horseback being used to control protestors fighting for the equality of Black people as another reminder of the violent origins of this country,” says Christopher “Soul” Eubanks. “Using horses’ bodies as weapons to intimidate protestors is not only animal abuse, but it’s also a disturbing display of dominance to bully protestors,” he adds. “Police not only have the law on their side, the benefit of the doubt and handheld weapons, but they also have the ability to use the body of another being to intensify their dominance.”

When Bénédicte Boisseron witnessed violent video footage involving police on horseback at a recent Black Lives Matter protest, she says she was reminded of similar disturbing imagery that made news last year. The associate professor of Afroamerican and African Studies at the University of Michigan, and author of Afro-Dog: Blackness and the Animal Question, says, “It reminds me of those horrifying slavery-like images of a handcuffed Black man being dragged by a rope by policemen on horses in Texas last August.” On August 3, 2019, the Galveston man, Donald Neely, was arrested by two white mounted police officers and charged with criminal trespassing. Video evidence shows Neely tied to a horse and walking with his hands behind his back to the station because, allegedly, no vehicle transport was available.

The exploitation of horses by police and military has a long and varied history, but when it comes to interactions between mounted police and Black people in particular, there is additional context and symbolism at play.

In 2017, for example, Charlottesville, Virginia witnessed one of the largest protests in its history, partly in reaction to the proposed removal of a statue of slave-owning Confederate General Robert E. Lee on horseback. Kari Weil, author and professor at Wesleyan University, recounts in the preface of her book Precarious Partners: Horses and Their Humans in Nineteenth-Century France: “Those who favored removal saw the statue as a monument to white supremacy. Those who opposed removal accused the other side of wanting to erase history, a history, we can assume, of white men riding high on their horses to rule over those only able (or authorized) to move on foot.”

“Police on horseback during [BLM] protests not only perpetuates the image of white supremacy but also [draws] parallels to the imagery of slave owners on horseback to enslave Blacks,” says Eubanks, who also takes into account the plight of the animals. “Riding horses isn’t done for the benefit of horses, it’s done for the benefit of humans, so horse riding will always be a form of oppression.”

“Horses are being weaponized, exploited, and put in harm’s way by police at these protests,” says Brenda Sanders, a food justice activist based in Baltimore, Maryland, who promotes veganism as a solution to many challenges faced by people in marginalized communities. She adds that “seeing cops riding astride these massive creatures positions horses as co-oppressors, and further perpetuates negative feelings many oppressed people have towards animals. So instead of people seeing these animals as victims of human oppression, they’re seeing them as the enemy.”

As we have seen from protest footage involving mounted police, both horses and humans are at great risk when the animals are forced into violent clashes. “Using horses during protests not only endangers horses but it also endangers everyone involved,” says Eubanks. He explains that when sensitive animals such as horses are put in highly tense and stressful situations, their behaviors cannot be easily predicted or controlled. “Protests are volatile, and horses are living, breathing, sentient beings, not inanimate objects,” he says. “Using animals as objects to display dominance against people fighting for equality is toxicity on display.”

The exploitation and weaponization of oppressed animals by police to control, scare, and harm people protesting oppression adds more unjust insult to injury. “Oppressors will use every tool in their arsenal to carry out their oppression and it saddens me that horses are being used in this way,” says Sanders. “They don’t deserve to be used and exploited by the cops—no one does.”

The Unwritten Rule of Animal Rescue: Don’t Call the Cops