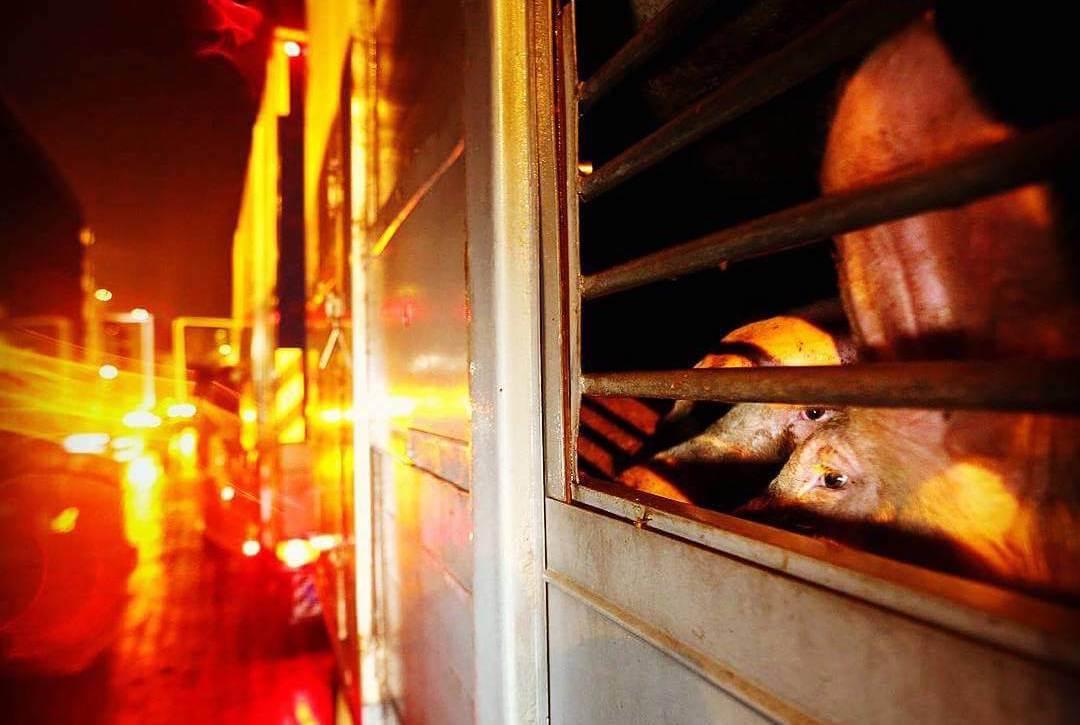 The story of animals dying – starving and thirsty, stuck in barns, trucks, and pastures, exposed to hotter temperatures than ever with no ability to change habitats – is too often lost to the more human story of air conditioning and shortened shower times.

This year, farm animals around the world face some of the deadliest temperatures on record. In June and July, Europe faced extreme and unprecedented heat waves brought on by the climate crisis. Belgium, the Netherlands, and the United Kingdom all set record highs. Paris hit 108.F. For two months, extreme heat threatened the region’s food and water supplies, forcing farmers into a difficult position: pack animals into overheated transport trucks, or leave them in pastures to suffer?

Farm animals are prone to heat stress. When the external temperature clocks too far in one direction, the animals lose the ability to cool themselves. After prolonged exposure, heat stress sets in. They start panting and their hearts begin to race. Without immediate relief from the heat, the symptoms intensify. The animals lose their appetite, become lethargic, and drink water excessively when they have access to it. When they don’t, heat stress can become fatal.

Nearly 4 million broiler chickens, 726,000 pigs, and 29,000 cattle die in transport every year – just in the U.S. In the EU, the number of animals who arrive at slaughterhouses dead, referred to by the industry as “dead on arrival” or DOA, is also significant. Around 1 percent of EU farm animals die on their way to the slaughterhouse, according to a 2011 report, or about 3.3 million animals. The report found lambs to be the most killed animals in transport, representing 94 percent of all EU DOAs.

Many countries banned the live transport of farm animals during the heat wave. They feared, and rightfully so, that the extreme heat would turn the trucks into eight-by-forty-six-foot ovens, effectively cooking the animals alive. Other producers continued to cram animals into transport vehicles after the EU Commission issued an alert specifically warning them not to.

According to the Federation of Veterinarians of Europe, the transportation of live animals should not be started if temperatures are expected to exceed 90F during any stage of the journey. In France, where more than 70 percent of European transport animals originate, temperatures hit 106F, making it the hottest June on record. France’s Ministry of Agriculture issued no restrictions for animal transport that month, leaving millions of animals to suffer.

Under normal circumstances, farm animals are fairly adaptable to external temperature change. But it gets significantly harder for animals to regulate their body temperature under stress. In the back of overcrowded, poorly ventilated transport vehicles, animals struggle to cope with their hostile environments. Overcrowding, loud noises, motion sickness, and dehydration put an extraordinary amount of mental and physical stress on the animals. During the worst of this summer’s heat waves, exhaustion, dehydration, heat stress, cardiac arrest, and sudden death were all too common.

The conditions inside transport trucks are further complicated by industrial farmers, who operate with little to no functional oversight when shipping animals across state and international borders. As a result, downed animals are left to rot in piles of their own feces. Millions more leave transport trucks barely able to walk, staggering as they approach the slaughterhouse door in their final moments of life.

In the U.S., transport animals are forced to travel for up to 28 hours without stopping. European regulations are much more progressive, limiting the confined transport of farm animals to eight hours, depending on vehicle type and species. This July, as temperatures soared above 105F, some EU countries passed heat-specific transport guidelines. In Hungary, if at any point during the journey the temperature inside the truck reached 95F, drivers were required to pull into the nearest rest station.

Germany, Austria, and the Czech Republic took similar precautions this summer, as the animal advocacy organization Eurogroup for Animals called member states to immediately suspend all live animal transport for the summer. Despite the “immense suffering of the animals as witnessed over the past years,” stated Reineke Hameleers, Director of the Eurogroup for Animals, these recommendations were often ignored, especially by transport vehicles leaving the EU. According to a 2017 report from a fact-finding mission led by investigators from the European Commission, animals crossing into Turkey were at an unusually high risk of unnecessary pain and distress, in large part because transporters were not able to keep the vehicles cool during the six-hour wait at the border.

“The limitations of the ventilation systems on the vehicles, combined with the lengthy waiting times and the working hours of the veterinary border control point would make it impossible for EU transporters using such vehicles to comply with EU requirements on days when temperatures are above [90F],” the report reads.

But temperature alone is not the best indicator of heat stress. The EU regulations state: “No animal shall be transported unless it is fit for the intended journey, and all animals shall be transported in conditions guaranteed not to cause them injury or unnecessary suffering.”

Without enough room to move, let alone breathe, transport animals quickly begin to panic. They defecate and urinate in the truck. Strictly speaking, a 90-degree metal shipping container is no place for animals, human or non-human, to be held for any amount of time.

“If they go down – well you can imagine lying in there for 10 hours,” Dr. Lester Friedlander, a former USDA veterinary inspector, told PETA.

Even before transport, farm animals suffered disproportionately during this summer’s record heat. In France, 61 of the country’s 96 mainland regions saw water restrictions, according to the state-run water restrictions website Propluvia. The measure hit French farmers – and their animals – particularly hard, as the state issued a string of crisis alerts banning water for agricultural purposes during the summer’s hottest months. Animals were left without enough food to eat, as many French farmers faced water restrictions through November.

In Australia this past year, when temperatures reached 117F and the country entered a disastrous summer-long drought, hay prices skyrocketed to $10,000 per truckload. Farmers could barely afford to feed their cattle. The aftermath was gruesome. Emaciated cows huddled in the shade of a single tree. Each day when the water truck arrived, increasingly slow, lethargic chaos ensued. In this aerial footage captured by the BBC, hundreds of animals can be seen racing across parched earth, colliding on their way to a single spigot hanging off the back of the truck.

Heat stress is even harder to treat in transport vehicles. In general, the bigger the animal, the longer it takes them to cool down and the more prone they are to overheating. Without food, water, fresh air, and space to lay down, cows are highly susceptible to heat stress. In extreme heat, it can take large cows up to six hours to cool down. Crowding them into transport vehicles only makes this problem worse.

Overheating is also a huge threat to transport chickens. According to a recent report published by the European Symposium on Poultry Welfare, the accelerated growth cycle of broiler chickens makes them more likely to succumb to heat stress than other farm animals. Since they have no sweat glands, chickens rely on panting, which spikes their heart rate, and raising their wings to release heat. But during transport, chickens are contained to 38” x 23” x 11” crates, which they shared with up to 12 other birds. There, they have no space to spread out. In overcrowded transport crates, chickens become territorial and fight, heightening their risk of heat stress.

On a separate occasion, inspectors observed “a significant increase in heat-related morbidity and mortality, as evidenced by gasping and heavy panting in more than 90 percent of all birds on the trailer. We observed many birds that were staggering around and aimlessly jumping about in the cages, while others were violently flapping their wings and gasping for air via an outstretched neck, in a final futile attempt to cool themselves… We also observed that numerous birds had already succumbed to heat stress.”

The symptoms of heat stress look different in every animal. Research suggests new genetic lines of farmed pigs produce nearly 20 percent more heat than their predecessors in the 1980s. When pigs are exposed to heat stress for as little as two hours, “their intestinal defense systems are significantly compromised.” Their weakened defense system puts pigs at greater risk for infection, especially in unsanitary conditions like transport trailers.

Sheep suffer a similar fate. In extreme heat, their breathing increases, spiking their heart rate. Before long, heat stress takes hold. They vomit and start convulsing. Some sheep lie down and, unable to get back up, are trampled by the flock. Their high instance of heat stress, like millions of other transport animals, is the direct result of careful calculations made by farmers to maximize profits, not animal welfare.

“It doesn’t matter whether a sheep gets 0.31 square meters or 0.35 square meters. They still won’t be able to get to food or water, and they still won’t be able to lie down, let alone cope with heat stress,” Dr. Sue Foster, spokesperson for Vets Against Live Export, told The Maritime Executive in the wake of a tragic boat journey from Australia to the Middle East in the summer of 2018. Some 2,400 sheep reportedly died from heat stress while on board. It remains one of the most fatal – and preventable – instances of heat-stress in transport animals to date.