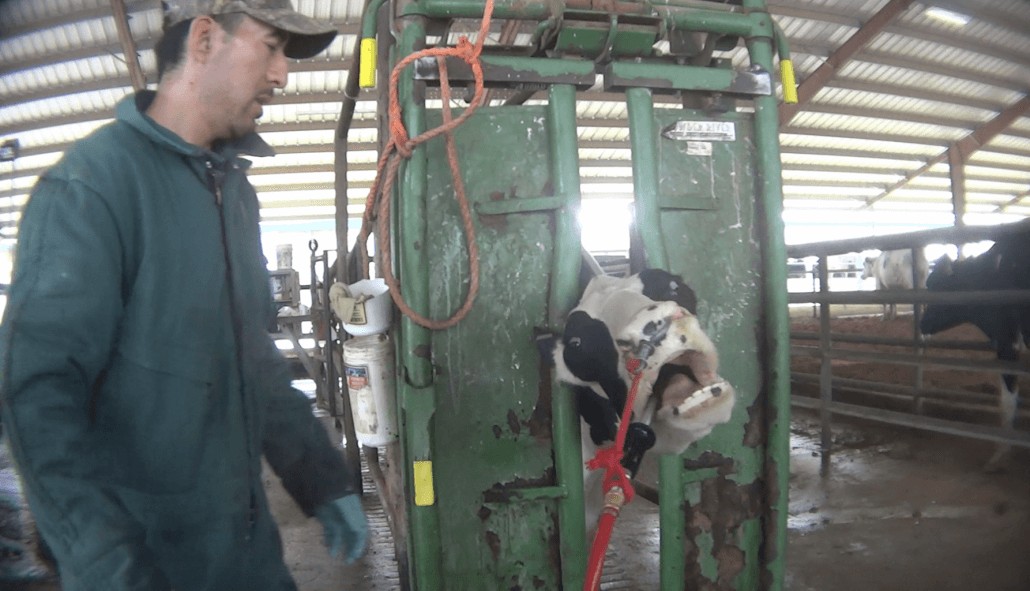 Animal Recovery Mission’s (ARM) investigation at Natural Prairie Dairy stands as the first-ever cruelty investigation into an organic dairy farm in the United States, and the third installment of the largest dairy investigation of all time into Fairlife and Select Milk Producers, Inc. The first two investigations released by ARM were Operation Fair Oaks Farms and Operation Fairlife.

Natural Prairie Dairy is located in Channing, TX, and houses over 25,000 cows between its four locations. Over four months, an ARM investigator documented cows stabbed with screwdrivers, kicked and dragged when unable to stand due to illness and fatigue. Cows were repeatedly and violently inseminated and mother cows were witnessed being chased while giving birth, and the babies immediately ripped away from their mothers.

The following video footage was compiled by the ARM investigative team between March and July 2019. The farm is still open for business today.

People concerned with buying organic dairy products are being deceived by the animal agriculture industry about the realities of how their food is being produced and the companies they support, which ARM documented and exposed during its latest four-month investigation.

Organic dairies, such as Natural Prairie Dairy, are often viewed by consumers and the public as naturally more humane and ethical than non-organic farms. But just because a farm calls itself “organic” does not mean it’s cruelty-free. In most cases, the term “organic” serves a very different purpose, one that has nothing to do with the humane and ethical treatment of animals.

Consumers pay top dollar for organic milk and dairy products, compared to conventional products, and they justify making such expensive purchases because the products are supposedly better for their health, the environment, and for the animals.

On organic milk labels, dairy companies reinforce this message, showing images of cows smiling and grazing in green pastures. That could not be further from the truth. Do these cows look happy to you?

The following evidence was compiled by undercover ARM investigators at Natural Prairie Dairy over four months. Investigators who return to the farm – or any farm like it – will witness similar acts of cruelty.

Cows are removed from their holding barns every eight hours to be milked, day and night. It is important to note that Natural Prairie Dairy is equipped with camera surveillance and that the actions of employees are recorded and overseen by management. As the company states on its website, all Natural Prairie Dairy employees receive training in “animal welfare and handling before they begin work on the farm.”

Natural Prairie Dairy promises to “take care of the cow” on its website. “A sustainable farm ecosystem means giving our cows the very best care.” In light of the farm’s commitment to animal welfare, the ARM investigator witnessed extreme and violent animal cruelty within the first few hours of employment.

Daily, cows were tormented, kicked, hit with shovels, and stabbed with screwdrivers by the farm’s so-called animal caregivers.

During its grueling investigation, ARM concluded with the same abhorrent conditions – abuse and cruelty towards the dairy cows – that was evident in ARM’s conventional dairy farm investigations. Amongst these criminal acts upon animals, the investigator documented dairy cows being tormented.

Downer cows were repeatedly beaten to get up. Cows that couldn’t prop themselves back up were stabbed with screwdrivers, pulled by the head by front loaders, dragged, picked up by the bucket and driven to a holding area where they awaited transport to be sold for slaughter.

Other cows were left to die slowly in barns, some cows taking a whole day or longer to die, all under the supervision of management. Cows were seen falling into cesspools and almost drowning.

Many of the cows suffer from infection and lameness and were reluctant to eat, so they were force-fed with metal tubes by untrained employees. The ARM investigator also documented dead calves and cows in a dumpsite.

In 2008, Organic Valley terminated its contract with Natural Prairie Dairy for suspected violations of the USDA’s Guidelines for Organic Certification of Dairy Livestock, among other organic labeling standards.

The average size Organic Valley member farm has approximately 65-70 cows, according to an investigation conducted by the Cornucopia Institute at Natural Prairie Dairy in 2008. Satellite imagery indicated that unlike legitimate organic farms, that commonly have one cow per acre, Natural Prairie had as many as 7.2 cows per acre.

Natural Prairie’s website states: “During the warmer months, we graze our cows on acres and acres of beautiful green pastures. When it gets cold, they stay in spacious, open-air, free-stall barns that protect them from the elements.” This could not be further from the truth. According to the ARM investigator, if a cow isn’t being milked, they spend their lives in illegally overcrowded barns where they are forced to lay on cement covered in feces. Many develop footrot and cannot walk.

The farm’s gross violations of the USDA’s organic dairy certification guidelines is a crucial component of this investigation. According to the guidelines, continuous total confinement of any ruminant animal over six months of age indoors is strictly prohibited.

Throughout his time on the farm, the ARM investigator found that Natural Prairie Dairy cows well enough and willing to graze only did so for about an hour a day during the grazing months. Many others never left the barn.

Donald DeJong is the owner and CEO of Natural Prairie Dairy. Soon after ARM began this investigation, it also discovered that DeJong is the vice chairman of Select Milk Producers, and a Board of Directors member of Fairlife and he has strong personal and business associations with Mike McCloskey of Fair Oaks Farms and Fairlife.

Natural Prairie Dairy currently supplies raw dairy to Kroger, Costco, and Publix through Aurora Organic Dairy’s bottling plant in Denver, Colorado. The company is in the process of expanding its operations with construction underway in Newton County, Indiana, that will supply dairy to Meijer Grocer, the Midwest, and East Coast.

The undercover investigator was fired after management found photos of animal abuse on his cell phone. They quickly deleted the photos – to no avail. ARM investigators submitted a substantial body of evidence to the Hartley County Sheriff’s Office for review.

“Consumer power is the most effective vehicle towards creating change by raising awareness of these criminal findings,” ARM said in a statement. “Leave dairy products out of your cart.”