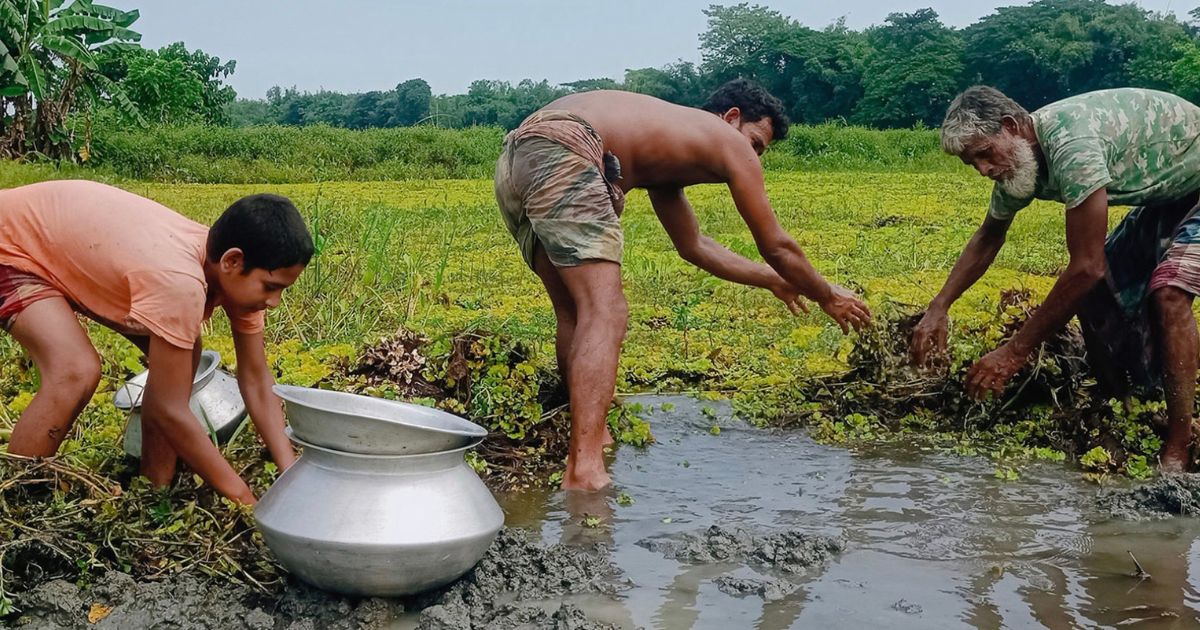 DHAKA – Khalilur Rahman, 65, has been fishing in a tributary of the old Brahmaputra River in Kishoreganj for 50 years. Nowadays, he often returns home empty-handed.

“The river has dried up. Without enough flow of water, many species of fish have disappeared,” he said.

Khalilur said when he was young, the Brahmaputra had an abundance of fish all year round.

The open waters of the past had plenty of native fish species, many of which have now disappeared.

“Many local fish species including bheda [Gangetic leaffish], Boicha, tengra and pabda have vanished from rivers. Now we get only taki [spotted snakehead] and shing [catfish],” said Khalilur, who lives on the bank of the Jhira Nodi, a tributary of old Brahmaputra River, in Gobaria village under Kuliarchar region in Kishoreganj.

“Fishing used to be my bread and butter, but I had to change my occupation,” said Nazim Uddin, 40, a local. He now works as a farm laborer.

In the past, there were more than 300 native fish species in Bangladesh, but many freshwater fishes have already disappeared while others are on the verge of extinction due to habitat loss, overfishing, pollution and climate change.

According to the latest Red List of the International Union for Conservation of Nature (IUCN) published in 2015, 64 among 253 freshwater fish species are threatened. Nine of those are critically endangered, 30 are endangered and 25 are vulnerable.

If a species has not been spotted for 50 years, it is declared extinct, according to the IUCN.  Currently there are some 100 native fishes on the verge of extinction in Bangladesh, although no fish has been officially declared extinct yet.

But, based on research and survey in the field over the last 30 years, Mostafa Ali Reza Hossain of the Department of Fisheries Biology and Genetics at Bangladesh Agriculture University has prepared a list of 30 species that have vanished.

He said 30 tiny, small and medium fish species under 13 families vanished from the wild over the last 30 to 40 years.

There was once a small fish – Nandil – in the Mymensingh region that has not been spotted in the last 20 to 40 years. In addition, another fish species named Tila Shol from the Sylhet region can longer be found.

Mostafa said each fish family typically had six to seven species, of which one or two from each family have vanished.

Open rivers and other bodies of water in Bangladesh are dwindling fast due to development interventions, unplanned urbanization, encroachment and siltation, which are destroying the habitats of indigenous fish species and other aquatic animals.

Bangladesh is located in the lower portion of the mighty Ganges-Brahmaputra-Meghna (GBM) river system that originates in the Himalayas. A huge volume of silt is carried by the rivers, which settles in riverbeds and other bodies of water, causing widespread habitat loss for the fish.

According to a 2018 study, the GBM river system carries between 1 billion and 2.4 billion tons of silt every year. When the silt is deposited in the riverbeds, floodplains and bottoms of beels, the bodies of water become susceptible to drying up during periods of lean flow or reduction in depth below critical levels, which is not suitable for fish to thrive.

In addition, new roads across the floodplain areas with little or no fish passes are making wetlands fragmented, resulting in more isolated subpopulations of fish, which reduces the scope of their distribution.

There is high demand for indigenous varieties of fish in local markets, which encourages overfishing. Fishermen often apply destructive fishing practices — use of current nets and monofilament gill nets, draining of waterbodies and poisoning — which destroy fish biodiversity.

“Because of the price they fetch, fishermen become desperate to catch native varieties — from mother fishes to immature ones,” Mostafa said.

Usually, floodplain-residing species take refuge in ditches or pits during the dry season. These species are caught by draining the water.

To meet the country’s growing population demands for food, farmers in Bangladesh use pesticides and fertilizers excessively in crop fields to boost production. But after it rains, the agricultural runoff reaches bodies of water, affecting native fish habitats and their breeding grounds.

In 2020, about 37,422 metric tons of pesticides were used in agriculture, according to the Department of Agricultural Extension (DAE).

In addition to pesticides, Mostafa said untreated sewage and industrial waste are being released into rivers and wetlands across the country.

Due to high and erratic precipitation in upper catchments of the GBM basin, induced by global climate change, the river system is carrying larger and larger volumes of sediment.

“Rainfall patterns in Bangladesh have become erratic due to climate change. Many waterbodies, including beels and canals, are drying up for lack of rainfall during the monsoon. Ultimately, it is affecting fish production,” said Khondker Murshed-e-Jahan, deputy manager of WildFish Centre.

According to a 2019 study, alteration in climatic factors like temperature, rainfall, increased drought, siltation and early flood over a decade caused an overall 21.25 percent decline in fish biodiversity, including losses of 16.67% for carps, 27.27% for catfishes, 10% for barbs and minnows, 20% each for snakeheads and eels, 23.08% for perches, 50% for featherbacks, 33.33% for loaches and 16.67% for miscellaneous species.

A total of 67 native fish species had previously vanished from nature, but the Bangladesh Fisheries Research Institute (BFRI) is conducting research to revive the lost fish species.

BFRI Director General Yahia Mahmud said some 37 fish species out of 67 have already been revived through breeding programs, and the fries of local fishes are being released into natural bodies of water like rivers, wetlands and haors for their recruitment.

He said the fish fries are also being distributed among fish farmers so they can cultivate these species and help protect them from extinction.

“If there is a shortage of fish in an area, fish fry from the gene bank will be released in that area,” Rezaul said.