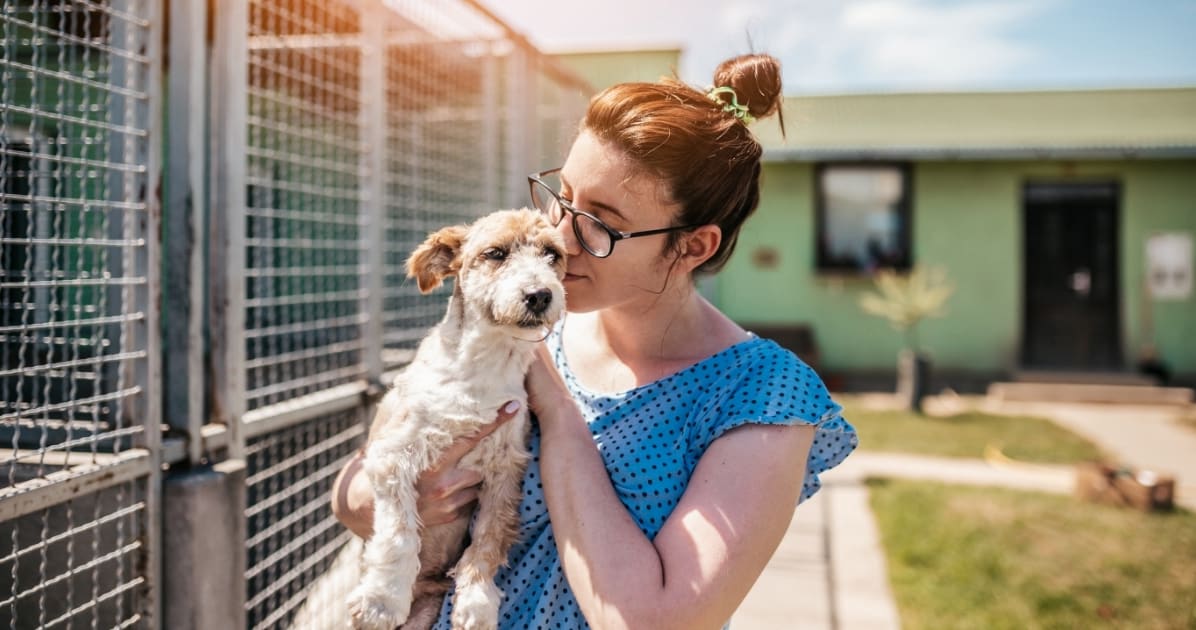 You don’t need to work or volunteer in animal rescue to understand this sobering fact: There are gobs of cats and dogs who need homes. The American Society for the Prevention of Cruelty to Animals estimates that 6.3 million companion animals—3.1 million dogs and 3.2 million cats—enter U.S. shelters every year, and sadly, many don’t make it out. Thousands of pets are killed due to a lack of space every year.

The good news is that the number of animals being killed in shelters is decreasing. Best Friends Animal Society, a leading animal welfare organization, recently reported the most significant annual decline in animal deaths in shelters. Compared to the 625,000 cats and dogs who were killed in 2019, only 347,000 were killed in 2020.

Why the sudden change? The country is becoming more and more in favor of “no-kill” practices, a charge that Best Friends is spearheading. “We want to ensure that every shelter has the resources to save every dog and cat who’s savable,” says Holly Sizemore, chief mission officer with Best Friends. “Our mission, which is broader than no-kill, is to create a time of no more homeless pets.”

While this is a worthy goal, no-kill isn’t without controversy. Some critics even suggest that it endangers more animals than it helps—but why? The issue is complicated and controversial, as you’ll soon see.

What does no-kill mean?

Although the no-kill movement has been several decades in the making, it didn’t truly get its legs until 1989 when Ed Duvin, widely recognized as the father of the no-kill movement, penned an article titled “In the Name of Mercy” in the now-defunct magazine animalines. “Shelters cannot continue to be slaughterhouses and friends of animals cannot continue killing healthy beings in the name of mercy,” he wrote. “A new and larger vision is needed, a vision in which shelters hold themselves accountable for meeting demanding performance standards that preserve life – not destroy it.”

Best Friends had already embraced that vision when it started its no-kill animal sanctuary in Kanab, Utah, in 1984.  At the time, almost 17 million shelter animals were being killed in the U.S. every year. Today, as the country’s largest no-kill sanctuary, Best Friends has become one of the fiercest advocates for the no-kill movement.

Under Best Friends’ guidance, 48 percent of the 4,404 shelters in this country are currently no-kill. That’s double the percentage of shelters that were considered no-kill in 2016. Numerous cities and states have already moved in that direction (Check your state or city here.), which dovetails with Best Friends’ mission to create a no-kill nation by 2025. Its goal is to give every shelter in the country the resources to save every dog and cat who can be saved. “No-kill is a community ethic that reaches far beyond shelter walls or any kind of operating model,” Sizemore says. “It’s about a commitment to create an ecosystem of mutual support and collaboration to help the most vulnerable pets and their people.”

How does Best Friends define no-kill? Sizemore says it’s a two-part definition. “First, it’s a philosophy that begins with the simple idea that the lives of homeless animals matter and that we have an obligation to save every pet who can be saved,” she says. In fact, Best Friends’ website defines it as “healing the animals who can be healed, treating behaviors that can be treated, and prioritizing the safety of both pets and people in our communities.”

Secondly, Sizemore says no-kill serves as a benchmark, given that shelters must have a 90 percent save rate to be considered no-kill. (Here’s how Best Friends calculates it.) “It’s a percentage of pets saved as a percentage of the total intake,” Sizemore says, adding that while there are shelters hitting a save rate greater than 90 percent, others may have a lower save rate but can still be considered no-kill if they meet other criteria. That’s especially true with shelters that focus on hospice care or neo-natal kittens.

And for those wondering, there’s a humane reason not to strive for a 100 percent save rate. “The definition of who is savable is a tricky question, and it’s changed over time,” Sizemore says. She points, for instance, to a time when every cat who was FIV positive would have been euthanized, but that’s not the case today. “Instead, those who are deemed unsavable are in actual need of euthanization, perhaps because they’re suffering too greatly or can’t be rehabilitated.” Humane euthanasia would then be used as a last resort.

The no-kill philosophy is one that Austin Animal Center in Texas practices, and as the state’s largest no-kill shelter and one that’s open admission, meaning it has to take in every animal, the benefits are tangible. “Animals who wouldn’t have had a chance anywhere else have a chance here,” says Jennifer Olohan, communications and media manager with Austin Animal Center. At the time of publication, the shelter had 500 animals on-site, with another several hundred in foster care. Because it’s open admission, it doesn’t pick and choose. “We take every animal, including aggressive ones, and if that animal is too much for our staff, we can reach out to partner rescues who are better equipped at handling that animal.” The shelter will also work with individuals to find solutions to keeping companion animals in their homes, if possible, versus surrendering them.

What’s the problem with no-kill?

To say no-kill is a loaded term is an understatement, and it often comes with harsh criticism. “People who care about animals are being duped into thinking that no-kill will reduce the number of animals, but the result of the so-called no-kill policies is more animals dying,” says Teresa Chagrin, Virginia-based animal care and control issues manager for PETA, noting that PETA’s website maintains dozens of examples to support her points.

She contends that several factors are driving an increasing number of homeless animals in cities across the country, as evidenced by media reports, one being that shelters embracing no-kill are turning away sick, injured, or aggressive animals. “If you’ve already reached the 10 percent of allowable animals who can be euthanized or you don’t want to affect your save rate by having to kill them, then you’re going to start turning animals away, something that will continue to happen until everyone who cares works toward no-birth and thoroughly rejects no-kill,” she says. “When you’re making decisions based on statistics, you’re doing what’s best for your bottom line, not the individual animal.”

In some cases, shelters may even require appointments or fees to surrender animals. But Chagrin says that appointments often aren’t available for months, and somebody who needs to surrender an animal because they’re being evicted or can’t afford the fee often have little choice but to abandon their animal, leaving them behind in their now-deserted home to starve and potentially die, or letting them loose on the streets where any number of deadly scenarios is likely.

An even grimmer situation may be playing out. “Because they’re in a so-called no-kill setting, some animals are being kept alive, even though they’re in chronic pain and their quality of life is nil,” she says. Take, for instance, a dog too dangerous to live in society who then lives in isolation in a pen for his or her entire life. “In any other case, people would be up in arms, but when it’s done by a no-kill organization, people overlook this by saying they’re doing the best they can, even though that animal is suffering.”

Of course, the opposite of no-kill is kill, and although “kill shelter” is no longer an accepted term in the rescue movement, the public mistakenly assumes that if a shelter is not no-kill, then it’s killing loads of animals at random. (For an inside look at what it’s like to work at a “kill” shelter and why they’re not all bad, visit this page.) “If individuals need to surrender animals, they might let them loose on the streets versus going to what they think is a kill shelter,” Chagrin says.

This misconception in terms is brewing another problem. “People think no-kill shelters are ending euthanasia so they throw their money behind no-kill shelters,” she says. That only winds up hurting open admission shelters not practicing no-kill. “These shelters are losing support from the public, which is destroying the animal sheltering community, but people need to understand that euthanasia is not the worst thing that can happen to an animal.”

So, is no-kill the solution?

That’s a question that can’t be answered in one article. The issue is that complex. While Chagrin is campaigning for all shelters to be open admission, organizations like Best Friends are pushing for more no-kill shelters, although Sizemore does say that having both open admission and limited admission shelters can benefit communities. It should also be noted that she isn’t aware of any shelter not taking animals because it will affect their save rate.

If there is common ground somewhere, though, it’s in this statement: No companion animal should be homeless in the first place, something Chagrin says is doable. “Animal homelessness is 100 percent preventable if people were required to be responsible and sterilize their animals and stop creating more homeless animals when there aren’t enough homes for the animals now,” she says. Spaying and neutering is also at the forefront of Best Friends’ programs.

To that end, Chagrin encourages individuals to ask their elected officials to require that all animals be spayed and neutered and even subsidize spaying and neutering. And—​​this should go without saying—adopt your next animal companion from a shelter or if possible, consider fostering.

Pit Bulls Are Not Monsters