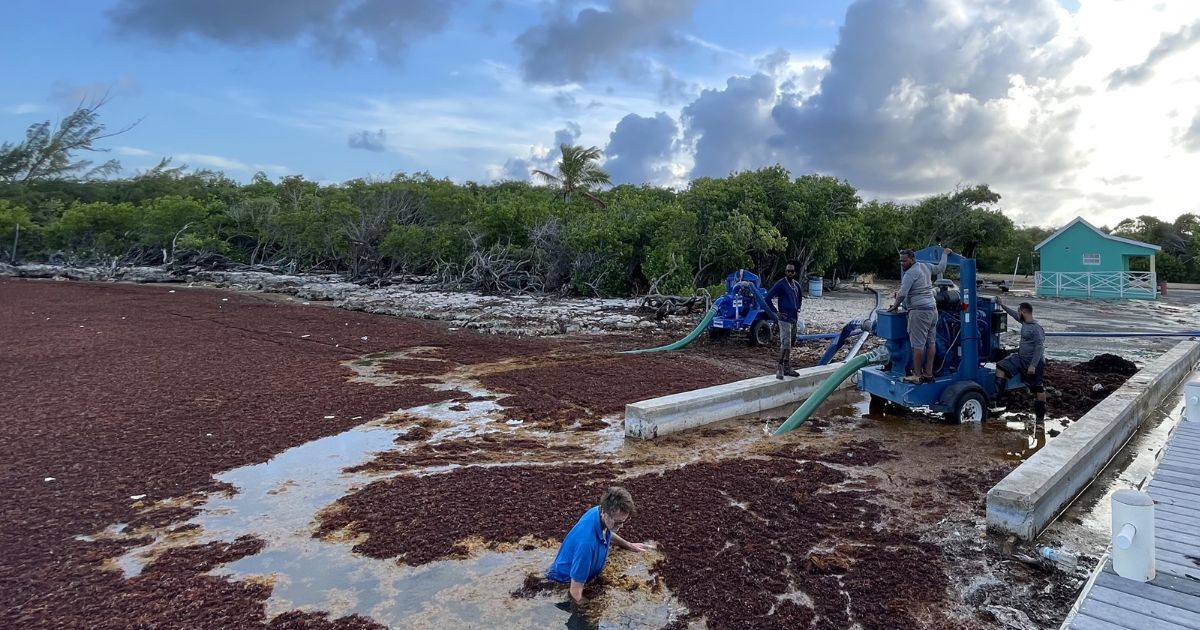 This story originally appeared in Hakai Magazine and is republished here as part of Covering Climate Now, a global journalism collaboration strengthening coverage of the climate story.

It came swiftly, almost overnight. The scattered patches of sargassum—a type of brown seaweed—that Troy Leacock spotted in Grand Cayman’s North Sound one July afternoon had, by morning, transformed into an enormous carpet that engulfed boats and extended nearly 100 meters into the bay.

“It’s not like we never see any sargassum there,” says Leacock, a Cayman Islander who runs private boat charters in the North Sound. “But you never get that huge carpet, not like what we saw that day.”

Within a few days, the rot kicked in. Fish floated to the surface. Wind compacted the seaweed, pushing ashore a stench so foul that it cleared the parking lot of Ron Hargrave’s restaurant, Tukka West.

“The water actually bubbled,” Hargrave says. “I’ve been on the island 24 years … I’d never seen fermenting water in the ocean before.”

Since 2011, sargassum has been intermittently clogging Caribbean coastlines in unprecedented quantities. Scientists aren’t completely sure why these blooms are growing so much more potent—human sewage and nutrient-rich runoff from the Amazon River, made even richer by deforestation, could be the culprits. So could changes in ocean currents triggered by warming seas.

In the open ocean, sargassum provides habitat for hundreds of species and food for turtles. But when it chokes the coastline, building up in thick mats, it’s a sea-life killer that smothers shallow-water habitats. As it rots, bacteria decomposing the seaweed strip the water of oxygen.

While the problem isn’t new, the search for solutions is becoming increasingly pressing.

That’s why, when the Cayman Islands’ government mobilized emergency funding to vacuum the seaweed out of the water and dispose of it on land, locals like Leacock hoped for a good outcome.

From July 29 to August 1, workers using an industrial pump removed more than 260 square meters of decomposing seaweed from the sound. But the crew was forced to cut their efforts short—the pump was just no match for the sargassum mats. The sargassum, said Jennifer Ahearn with the Cayman Islands’ Ministry of Sustainability and Climate Resiliency in a press release, had “degraded to the point where pumping it out [was] no longer feasible.”

To some, the failure of the trial came as no surprise. “I thought it was a token gesture,” says Hargrave.

With the government’s failed cleanup effort, locals are left wondering what comes next.

Currently, the Cayman Islands has no national sargassum response plan. The story is the same across much of the Caribbean. Around the region, local entrepreneurs are coming up with creative solutions. In Barbados, for instance, sargassum is transformed into organic compost, while in Jamaica the seaweed is fed to goats and turned into charcoal for barbecues.

But entrepreneurs can’t keep up with the amount of seaweed coming in, and most of the time, when sargassum is allowed to float ashore, it is raked up then left to rot in landfills. There’s no question in Leacock’s mind—that can’t be allowed to happen in the North Sound, a gateway to a 3,500-hectare mangrove wetland and critical breeding ground for marine life.

“It’s imperative that we remove it before it hits the coast,” Leacock says. Once the sargassum gets ensnared by the mangroves’ tangled roots, he says, “it’s game over for removal.”

Hargrave also thinks prevention is the best approach. The sargassum problem is far bigger than can be solved with a vacuum, he says. He’d rather see authorities invest in emergency booms, like those used to contain oil spills, that could be deployed to redirect incoming sargassum blooms at a moment’s notice.

“I mean, is taking it out of the ocean going to solve the problem? No, because there’s just so much of it, and you sort of can’t compete against it,” says Hargrave. “But to be able to divert it at a given time, when you know that it’s coming, to save it from going into the sound and doing what it did last time … that would be very beneficial.”