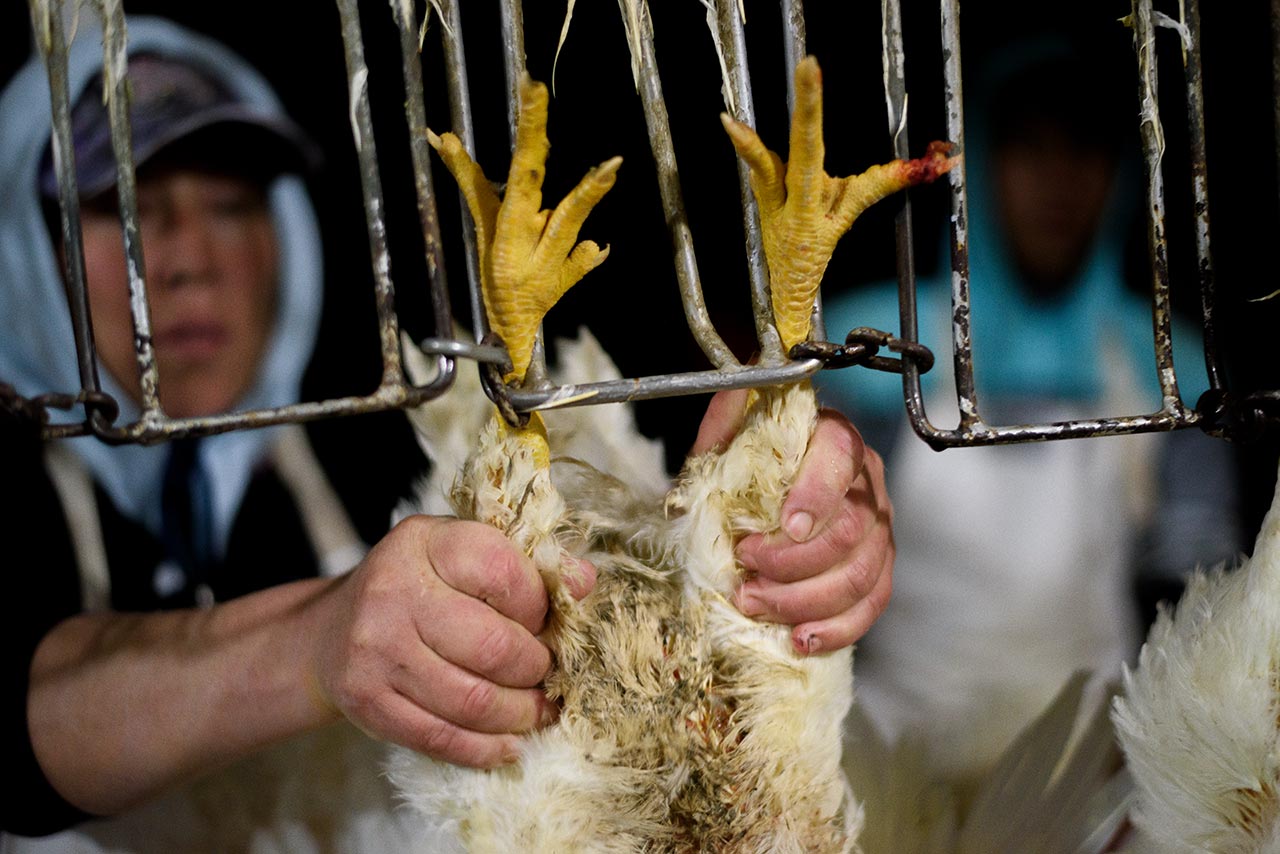 Slaughterhouses across Canada and the U.S. have become epicentres for the spread of COVID-19. Workers—many immigrants, temporary foreign workers, people of colour and First Nations—have since expressed fear about returning to work, after some facilities closed due to large numbers of cases and deaths, only to be reopened despite union pushback. The current coronavirus pandemic has illuminated these facilities—mostly owned by wealthy multinational corporations—as spaces of converging oppressions, of both workers and animals.

“This is an industry which only values workers and animals for the profit they can generate,” says Dr. Kendra Coulter, chair of labour studies at Brock University. “For the workers, it’s through the intense use of their labour. For animals, it’s in their early and unceremonious deaths. No one—human or animal—is truly valued as an individual.” Dr. Coulter says that within the meat industry, both workers and animals are commodified, “animals literally so,” and both are seen as disposable. “This has become especially apparent in recent weeks.”

No one dreams of working in a slaughterhouse, Dr. Coulter points out. “Slaughterhouses are predominantly staffed by poor people—often racialized people from the local community, and increasingly from elsewhere in the world—who are desperate for work.” And the work, she describes, is difficult and dangerous. “It is an assembly line of industrialized death and dismemberment. Rates of turnover are well above manufacturing averages for a reason.”

Leah Garcés, president of global farmed animal protection group Mercy for Animals, also points out that many who work in these facilities do so via work visa programs, “so those people don’t have a choice not to show up.”

Garcés is a long-time advocate for both animal rights and workers’ rights, recognizing that within the system of industrialized animal agriculture, the two are inextricably linked. “If you look at the current circumstances, what we see is a system of oppression that treats people, animals, and everyone at every link of the chain, inhumanely. They are all just widgets in a machine,” she says of slaughterhouse employees and the animals they process, “and the purpose of this machine is to just deliver cheap protein.” The top priority of these facilities is not the wellbeing of workers or animals, she says, but only that the machine functions at top efficiency. “And what we’re seeing now, is it can’t.”

For Garcés, it is no surprise that slaughterhouses have become hotbeds for COVID-19. “It makes complete sense because while the rest of us are standing six feet apart, workers are standing shoulder to shoulder.” So they get sick. Some of them die. And for the animals, the trickle-down effect is that they have nowhere to be slaughtered, leading to farmers engaging in mass killings on the farm, via methods including gassing, shooting, and perhaps the most heinous: ventilation shutdown.

Industrialized animal farming and slaughter “is a very weak and vulnerable way to get our protein; it’s a very weak system,” says Garcés. “And COVID-19 is just shining a giant, massive spotlight on the fact that the way we have chosen to produce protein is extremely vulnerable to any kind of change. It’s not resilient.”

As many slaughterhouse workers across Canada and the U.S., are currently being forced back onto the kill floor, we are offered a glaring example of how the meat, dairy and egg industries view slaughterhouse staff: as expendable and replaceable, mere cogs in the wheel of production, not unlike the very animals they kill and process.

“Slaughterhouses are the violent endpoint in an industrialized profit-seeking chain that guarantees lousy jobs for workers,” Dr. Coulter concludes, “and intensive suffering for animals.”

The Best and Worst Countries for Animal Rights