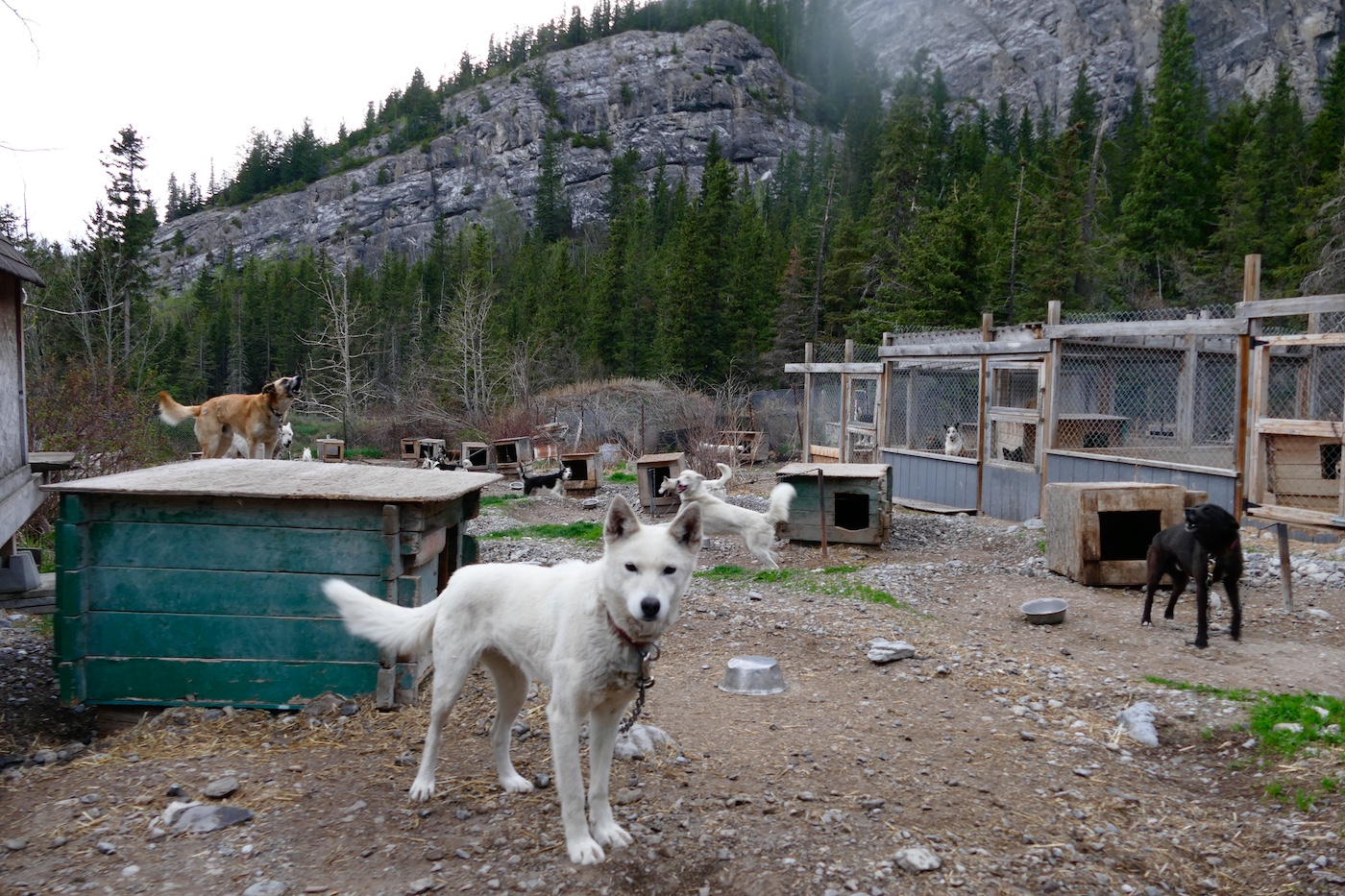 After Tucker Linsig viewed activist footage from a property containing sled dogs in Alberta, Canada, the former police dog breeder says he could not believe his eyes. He had to go see it for himself. It was June, and what he found, he says, disturbed him. “The kennels, for a big dog, were not very big,” he recalls, and the dogs, on chains, “were running in circles.” But what troubled Linsig the most, he says, was what he found a few yards outside of the dogs’ area. “I found tons of bones,” he says, “definitely dog bones.”

It’s a not an uncommon sight in the commercial dog sledding industry, piles and pits of dog bones, which activists have found in various locations across Canada. The cruelty of commercial dog sledding in the winter months has been well documented. Dogs are considered “athletes” rather than companions. They are exploited for money and fame, often overrun, pushed until injured or sick, kept in harsh, cold conditions, then can be shot once no longer useful, their bones simply tossed over the fence.

In Canada, dog sledding is a popular attraction for tourists seeking that “northern experience.” But what many people do not consider, is what comes of these animals during the hottest months of the year, when there is no snow, no tourists, only blazing sun and hundreds of mouths to feed. Where and how are these dogs kept? Are they taken home to rest and recuperate? Do they become pets during their offseason, loved and cared for until it’s time to be exploited once again? Sadly, the real story isn’t as magical as those sled rides through the snow.

In the summer, the majority of sled dogs in Canada are left tied up outdoors, in the heat, in the rain, with the legal minimum of care, for months at a time.

In the video, dozens of dogs can be seen tethered (three meters is the legal requirement) to cut-out plastic barrels on wooden stands. The area is barren, the ground is dusty, dirty and worn, and the air was a stifling 30 degrees Celsius (86 F), with little to no shade in site. The dogs were hot, many seeking relief in holes they had dug in the dirt. A local law enforcement officer eventually cut McQueen free, ironically enough, out of fear for her health in the heat. She has since been charged with trespassing.

There are various laws in Canada pertaining to the permanent tethering of dogs. In the city of Toronto, for example, there is a one hour maximum. In nearby Mississauga there is a four hour limit. There is an outright ban on tying up dogs unattended in the city of Calgary and in some B.C. municipalities. However, animals classed as “working dogs,” which includes sled dogs, are typically exempt from these rules.

In British Columbia, where sled dog welfare standards are considered the highest, sled dogs must be released from their tether once every 24 hours. Once. Otherwise, sled dog owners can leave their animals tied up as they wish, responsible only for providing the legal minimum care: food, water, shelter and veterinary care (though enforcement of even those requirements remains an issue). And if they want to shoot their dogs – their “property” – owners are legally permitted to do so.

Viewing video footage from commercial dog sledding operations across Ontario, Manitoba, and Alberta, during the summer months, a few things remain consistent: dogs tied with heavy chains, dogs exposed to the elements with very rudimentary shelters, dogs living in filth, and dogs acting frantically. Keeping such active, social animals consistently tied up within inches of each other could be seen as a form of torture (though mushers have long argued that).

In other parts of the world where dog sledding is also a popular attraction, concern for the psychological well-being of sled dogs has been put into law. According to Julika Fitzi, with Swiss animal protection group Schweizer Tierschutz STS, it is illegal to permanently tether any dog in Switzerland, including sled dogs. “Usually sled dogs are kept in groups in kennels,” she says, “minimum two dogs in one kennel, or if not possible for example because of [not getting along with others], it is also allowed to keep just one dog in a kennel, but there must be another dog in a kennel right next to him.” Fitzi adds that even kenneled dogs must by law have daily exercise, “whenever possible, free and without leash.” Even dogs chained up as guard dogs in Switzerland must have the opportunity to run free, she notes, “during the day at least for five hours.”

But of course, the prospect of improving welfare standards for sled dogs in Canada would not right the wrong of exploiting animals for money, nor change the position of these dogs as personal property under the law. Thus, owners could continue to use and dispose of their sled dogs as they wish, piling those bones up even higher.

That is why activists in Canada are calling for an outright ban on commercial dog sledding in the country. Just as the horse drawn carriage industry is quickly falling out of public favour (most recently banned in the city of Montreal as of the end of this year), and a ban on keeping captive whales and dolphins was just passed into law, so too should the exploitation of sled dogs for entertainment come to an end.

In the meantime, it’s up to tourists to look beyond the magical façade of a snowy sled trip across the northern tundra, to see the real life of these dogs, the truth, and discontinue making these businesses viable.

Correction on August 29, 2019: the original article claimed that the footage viewed by Tucker Linsig was from Snowy Owl Sled Dog Tours. This was incorrect. The footage (posted on Facebook here) was from a different nearby property. The article was also edited for clarity, and the Google Earth satellite image was added (source here).