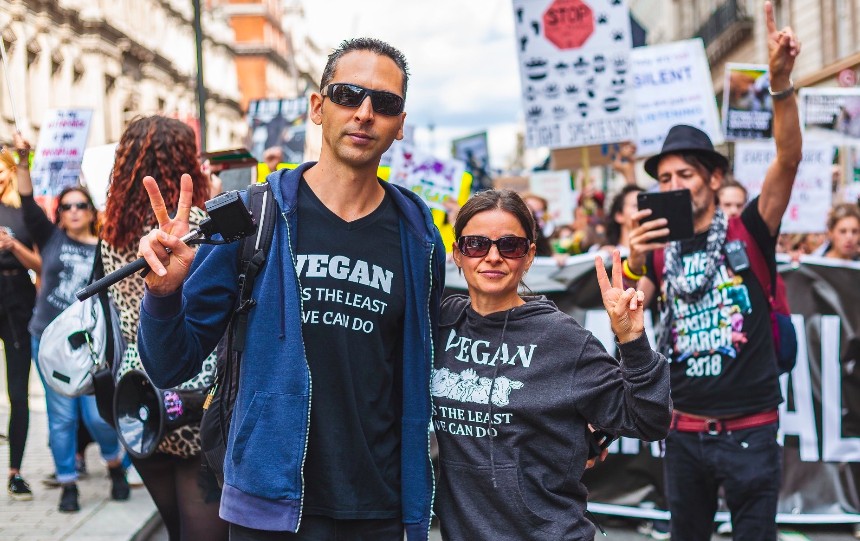 Picture your everyday street activist. You know where to find them. They’re often standing at street corners or outside your local coffee shop, waiting to ask politely for a moment of your time.

In recent years, the world has become more connected, and so have activists, who are taking the fight for a better world online. Social media is now an essential element to protest movements around the world. Facebook, Instagram, Twitter, they’re all built to do three things: organize, socialize, and get the word out. They do it better than any other form of mass communication on the market these days, and they do it fast.

Natasha Cuculovski and Luca Padalini, two former yoga instructors from Australia, are the perfect portrait of activists in the digital age. They’re hyper-connected. They have their own YouTube channel. In front of the camera, they’re direct. They ask hard questions. They carry extra memory cards and battery packs almost everywhere they go. When asking politely for a moment of your time doesn’t work, they bring bullhorns. They march in the street. They know what they stand for and so will you the second you lay eyes on them. So what makes these two former yoga instructors from Australia different from your everyday street activist?

Natasha and Luca have been on the road for over a decade now, advocating for animals in one way or another for the better part of that time. They left Australia in 2008 in the midst of a quarter-life crisis, hoping to find themselves far away from the corporate offices where they spent their nine-to-fives.

They use a special brand of social media storytelling – impact-focussed, upbeat, empowering – to turn highly engaged followers, ready and willing to like, comment, and share the vegan message, into highly engaged activists, who actually go out and live it.

In 2015, they coined the tagline, “Going vegan is not the most we can do. It’s the least we can do.” They encourage vegans to not be silent and instead to advocate or be active for animals in some way. 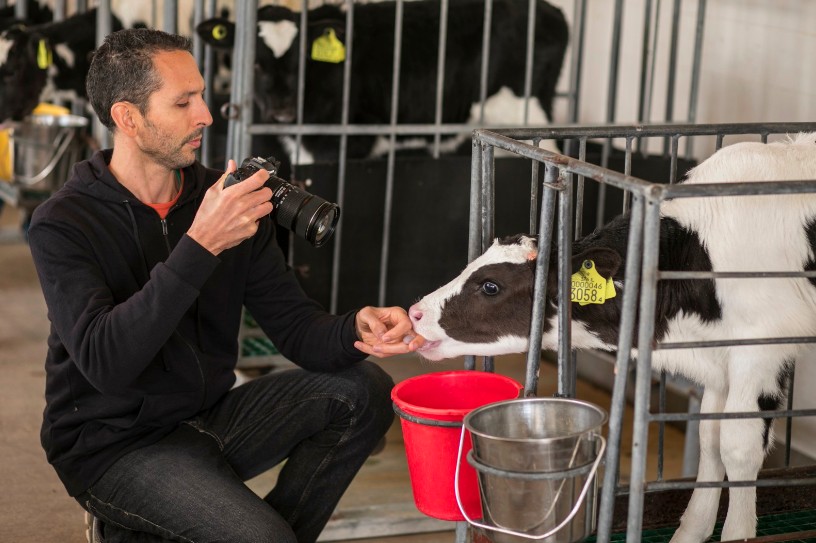 Natasha and Luca pride themselves in keeping their followers engaged, which is no doubt more challenging because they’re talking about animal rights. Many people don’t know what happens on factory farms and more people don’t want to know what everyone needs to see. Part of the beauty and the curse of social media is that if it gets too intense, people can click away.

“We’re in and out of people’s minds in a matter of minutes,” said Luca.

By sharing what they see in an authentic way, one that educates, motivates, and empowers others to see the world the way they do, Natasha and Luca are making activism an everyday experience.

Natasha and Luca have chosen to be child-free, but that doesn’t mean they don’t care about the next generation. Quite the opposite, actually. The most active age demographics across their social media platforms range from 12-24 years old. On That Vegan Couple’s page, many young people are being exposed to activism for the first time on social media, and only on social media, whether or not their parents support their commitment to veganism.

Activism is not taught in school. Most fourteen-year-olds aren’t encouraged by their parents to step outside the box. They’re encouraged to check the boxes: graduate high school, go to college, get a job. Although Natasha and Luca agree, they also encourage teens to do more than just check those boxes. They’re offering followers an alternative perspective of what other boxes can also be checked, ones that help animals, people, and the planet, which resonates with a younger vegan crowd.

“They call us their vegan mom and dad,” said Natasha. When their parents can’t (or won’t) answer questions about what it means to be vegan, Natasha and Luca can. 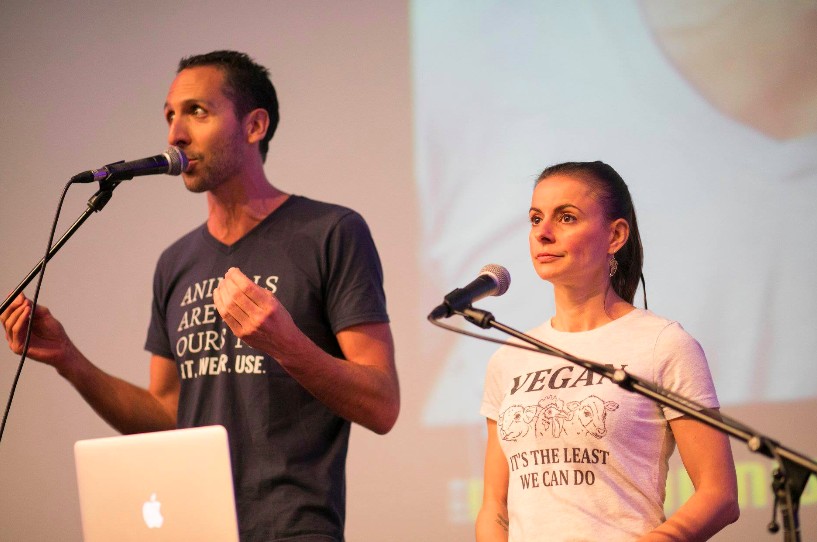 That Vegan Couple’s inbox is always open, and they constantly get messages like, “I want to be an activist but my parents won’t let me.”

It’s a beautiful thing that those kids can have a vegan mom and dad in Natasha and Luca. But they said it’s a little overwhelming and infuriating, too. Why won’t parents support their children’s choice to be vegan? Why do they have to make being different so hard?

“When they come to me, I want them to know that it’s okay to speak up,” said Natasha. “It’s okay to piss people off. It’s okay not to be liked by everybody, as long as you’re speaking up for animals.” 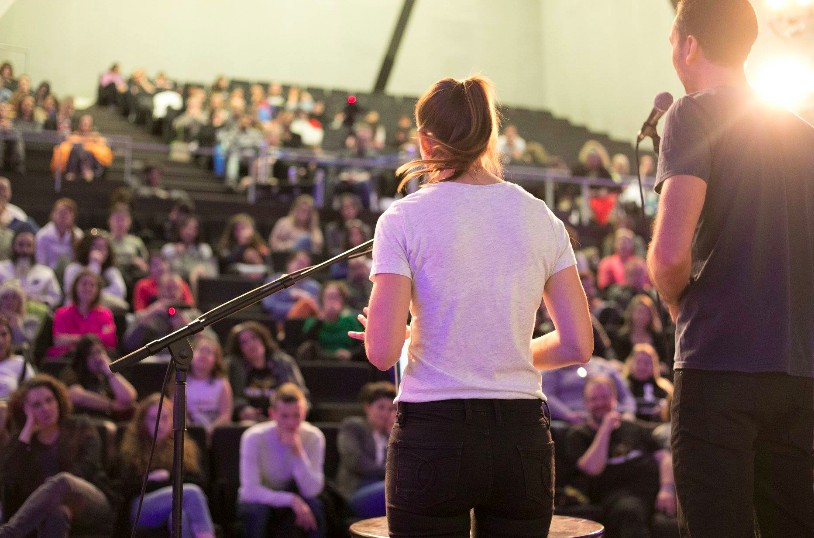 When the two started speaking up more on Instagram, they saw a fire spark in their followers. Their younger audience was getting tougher, gutsier. All of a sudden, people started doing more than sending That Vegan Couple pictures of their smoothie bowls and salads. They started showing up to protests with Natasha and Luca.

Since the switch from social media to social media-focussed activism, Natasha and Luca have been getting messages almost daily from people who went vegan “like a month ago and then they’re at an action with us.”

When other activists want to get involved and wonder, “what are Natasha and Luca doing,” all they have to do is click on their Instagram story. They’ll see Natasha caring for a sick cow at a dairy farm or Luca yelling into a bullhorn on the streets of London. They’ll know exactly where to go and how to act.

“Social media is the most effective way to reach people,” they said.

But still, it’s hard to be an activist online. Many of Natasha and Luca’s now-followers actually come to That Vegan Couple’s page in anger. They may have been pissed off by a response video or angry about a debate somewhere in the comments.

“Conflict is in our nature,” said Luca. “But as long as the trajectory is moving forward and towards animal rights, then we’re heading in the right direction.”

Especially on the Internet, people are always angry. That makes Natasha and Luca’s job nearly as exhausting as it is rewarding.

“I swear, every year I say I’m never going to be on social media again,” said Natasha. “But we do it for the animals.”

“Activism isn’t just for animal rights activists anymore,” they said. “Activism is for every single vegan.”

In all of That Vegan Couple’s videos, what shines through, aside from the obviously grotesque and absolutely heartbreaking condition of the animals, is Natasha and Luca’s ability to tell it as they see it.

When a video shows how a dairy cow’s udders are swollen from constant physical trauma, they simply point this out, saying, “look at how swollen her udders are.” That factuality is what keeps their followers, especially those new to the subject matter, watching until the end of the clip. When they describe a chicken’s suffering, their tone is normal, natural, and necessary, like it’s the first time, every time.

One 8-second Instagram story at a time, Natasha and Luca are lifting the veil on animal agriculture, and the industry isn’t happy about it. Farmers aren’t used to speaking honestly about the treatment of animals in the food system. But That Vegan Couple is.

“We’re not here to just rock the boat,” said Natasha. “We’re here to sink the boat.”

They’re not extremists. They’re vegan and they mean it.