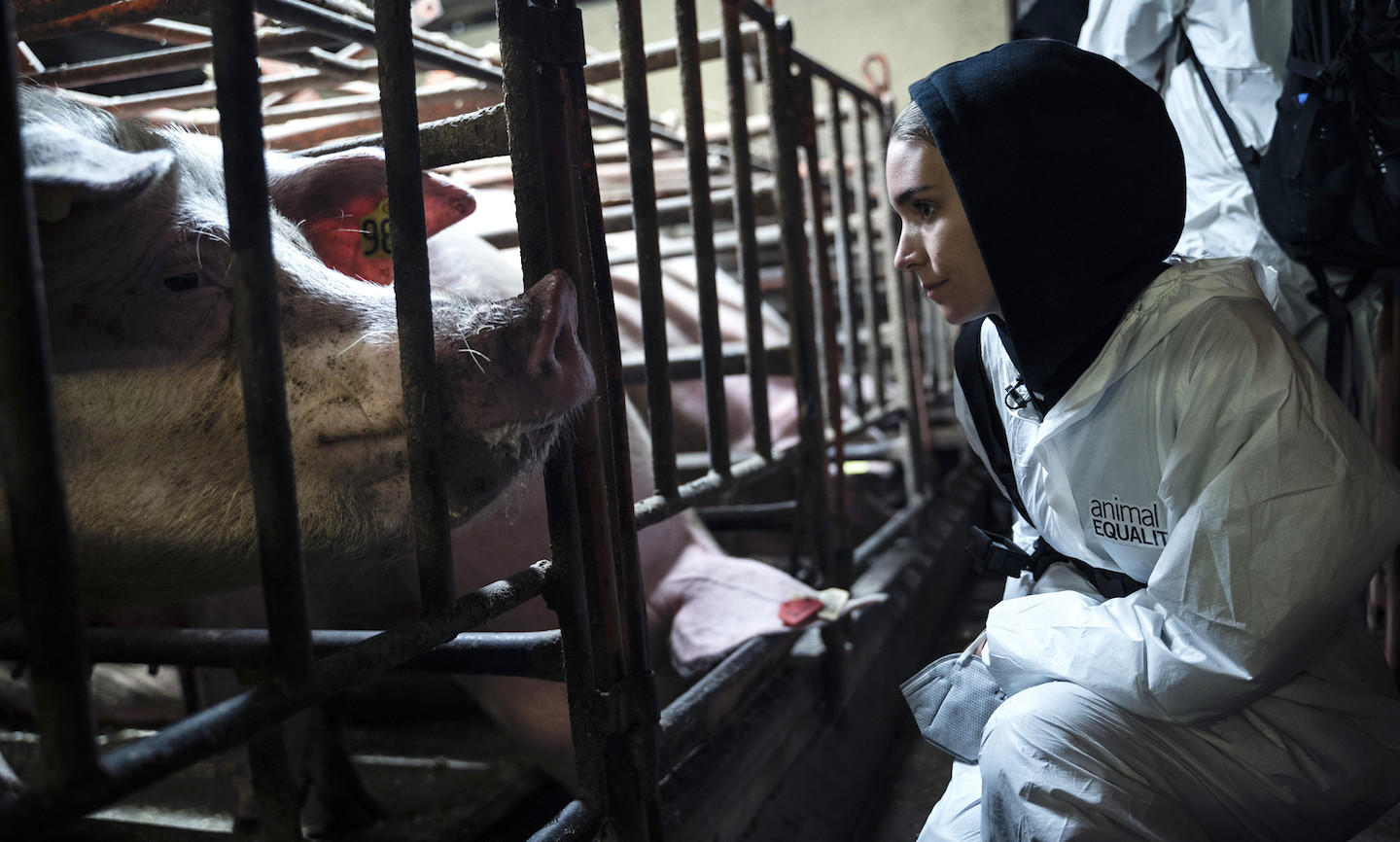 Animal Equality, a global farmed animal advocacy organization, has released a new investigation into the painful existence of animals in factory farming conditions.

The investigation was joined by the actor and animal rights activist Rooney Mara. Called “With My Own Eyes,” the video depicting the investigation encourages viewers to examine the harsh reality for billions of animals and the many reasons the global community must break its dependence on animal products.

“Nothing prepares you for looking into the eyes of a mother pig whose life is to be impregnated and left in a cage until she’s slaughtered,” said Mara. “I kept thinking about my sister who just had a baby, and how beautiful that instant desire to nurture and protect your child is. I can’t imagine how awful it must be to be literally trapped and crushing your own babies and not be able to do anything about it.”

In addition to witnessing the tragedies of mothers either being unable to nurse their young, or even accidentally crushing them, the investigators also discover dozens of weak and dying piglets receiving no veterinary attention and pigs with severe untreated hernias. Unfortunately, these conditions are merely regular features of a factory farming business.

“I kept thinking about my sister who just had a baby, and how beautiful that instant desire to nurture and protect your child is. I can’t imagine how awful it must be to be literally trapped and crushing your own babies and not be able to do anything about it.”

With over 50,000 chickens crammed into massive brightly lit halls, the video shows animals experiencing extreme distress. Broiler chickens are one of the cruelest productions of animal agriculture: they are bred to grow so abnormally large, so quickly, that their legs and organs cannot function, causing heart attacks, organ failure, and painful leg deformities.

“They’ve been bred to grow so quickly and so much that they can’t even bear the weight of their own bodies,” explains Sharon Núñez, President of Animal Equality, as the group slowly makes their way through the hall, encountering dead and dying birds on the way.

While Mara was shocked by her experiences on these factory farms, she also emphasized that the gravity of the situation is worsened by a lack of awareness and denial.

“I think a lot of people — even after they do see things like that — have some level of denial because it is so painful to imagine that that’s really how the world works, and that’s really something we’ve been party to.”

But even if someone isn’t moved by the animal suffering, Mara says there are other good reasons to stop paying for the products of animal agriculture. “If you can’t find the empathy for the animals just for the cruelty and pain and suffering that is their lives, look at your health,” Mara says. “Do it for your health, do it for the planet. There are so many different reasons to not keep animals in this way.”

Accompanying Rooney Mara, Sharon Núñez, President of Animal Equality, added, “Animal Equality’s undercover investigators face great personal risk to expose what the meat industry doesn’t want you to see, and what the public has every right to know. We are deeply grateful to Rooney for bravely looking into the eyes of these animals, and joining us in our promise to them to share their cries with anyone who will listen. Her courage is truly inspiring.”

If you want to help end the suffering of animals on factory farms, please consider sharing this article to increase awareness of the ongoing situation. For offering direct support, consider becoming a monthly donor to Animal Equality.