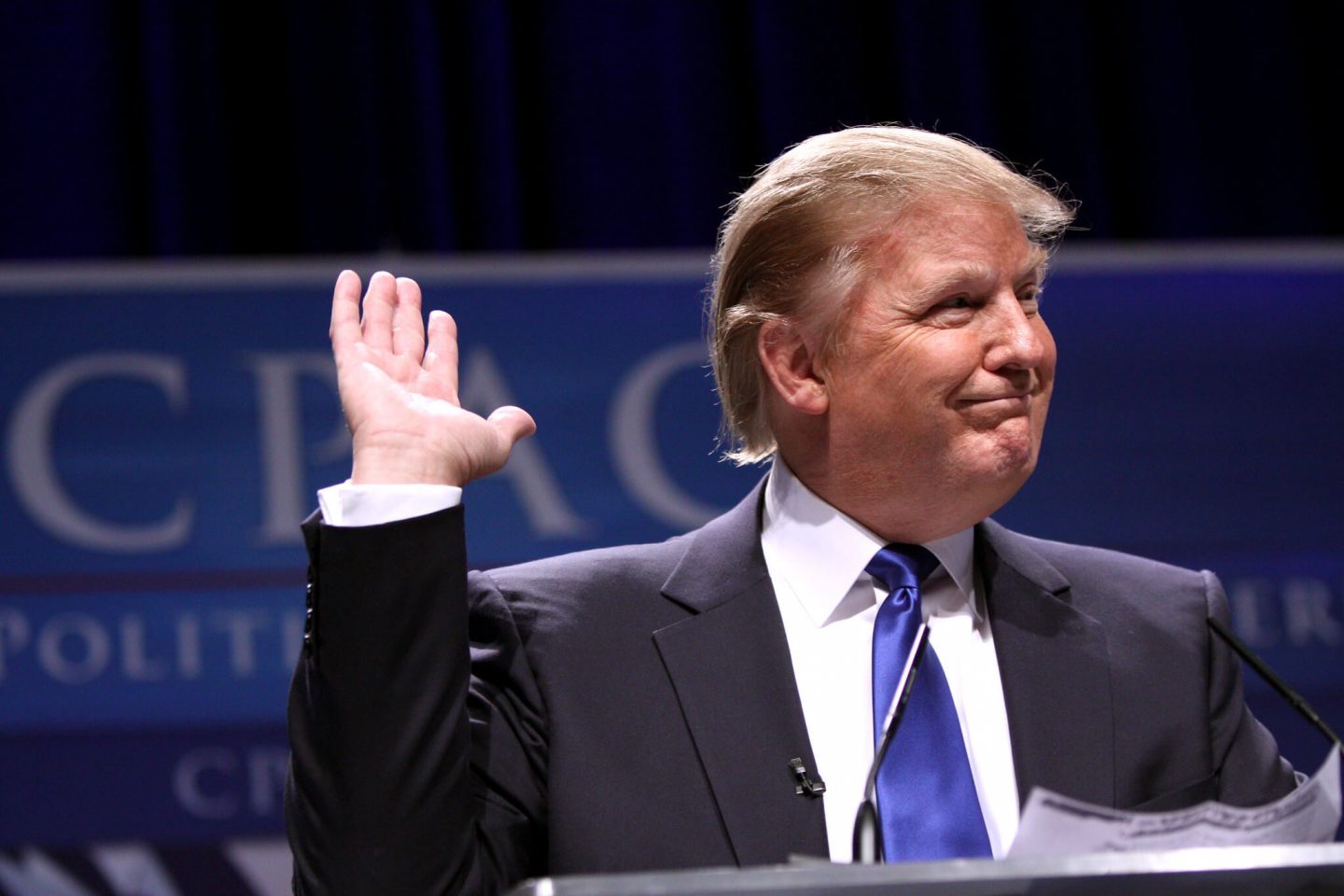 Since President Trump took office in 2017, the Department of Agriculture (USDA) has been purposefully and consistently burying studies that show the dangers of climate change, according to an investigation published earlier this week by POLITICO.

Over the past two years, the USDA has only published press releases for two of the 47 reports conducted by the Trump administration on the impacts of climate change, both of which supported animal agriculture, while ignoring other government-funded research on the negative effects the industry will face as carbon levels and temperatures continue to rise.

Compared to the Bush and Obama administrations, the USDA’s Agricultural Research Service (ARS), a trusted source of scientific information for farmers and consumers since the 1950s, has been virtually silent on climate change.

Our senior graphics editor @pattersonclark visualized hundreds of these press releases (going all the way back to 1996) to show the Trump administration’s clear pattern of ignoring climate issues. https://t.co/wLI7AX8EOr pic.twitter.com/ZRy4jGJAIL

From 2001 to 2008, during the Bush administration, the ARS published over 40 climate-related news stories. From 2009 to 2016, the Obama administration published more than 70 climate stories. So far, the Trump administration has published just two, both of which outright supported the ongoing degradation of the environment by animal agriculture.

The global food system contributes nearly 30% of all greenhouse gas emissions. Animal agriculture makes up about half of that.

One of the USDA studies claimed that beef production contributes a relatively small amount of greenhouse gas emissions. When the department decided to issue a press release about the study finding that producing beef—known to have high methane, carbon, and water footprints—actually made up a “very small fraction” of greenhouse gas emissions, the ag-friendly press had a field day, writing several stories that no doubt benefited the beef industry.

It’s also worth noting that this study, one of the two climate-related studies published and promoted thus far by the Trump administration, was partially funded by the National Cattlemen’s Beef Association.

By comparison, in the past year alone, the New York Times published 795 articles about the impacts of climate change, explicitly naming animal agriculture as a culprit and one of the industries that will suffer the most from the effects of climate change in numerous investigations, all of which were substantiated by the world’s leading climate scientists.

The New York Times isn’t the only major publisher who doubled down on its climate coverage after President Trump decided to pull the United States out of the Paris Agreement. The Washington Post, The Guardian, BBC, The Independent, CNN, ABC, NBC, The Wall Street Journal, and The Los Angeles Times have all identified agriculture as one of the leading contributors to climate change and one of the first to feel its effects.

The Trump administration has done the complete opposite. The President has been forthright in his denial of climate change, telling reporters, “I don’t believe it” back in 2018. This year, he’s on record avoiding the question, “I believe there’s a change in weather,” without acknowledging that climate change is human-caused.

Patrick Moore, co-founder of Greenpeace: “The whole climate crisis is not only Fake News, it’s Fake Science. There is no climate crisis, there’s weather and climate all around the world, and in fact carbon dioxide is the main building block of all life.” @foxandfriends Wow!

But that doesn’t mean the USDA has stopped putting money towards climate science. In fact, the department is funding plenty of climate-related research.

The second study promoted by ARS under the Trump administration said that removing animal products from the food system could cause widespread nutritional problems.

“USDA has several thousand scientists and over 100,000 employees who work on a myriad of topics and issues,” a spokesperson for the department told POLITICO. But clearly, not every finding solicits a government press release, especially those with negative implications for the politically powerful agriculture industry.

The latest climate-related press release issued by the USDA mentioned greenhouse gases only peripherally, calling them a “personal consideration” for farmers.

Since Trump took office, the administration has successfully rolled back the most significant federal effort to curb greenhouse gas emissions to date, initiated by the Obama administration. A recent New York Times analysis, based on research from Harvard Law School, Columbia Law School, and other sources, counts more than 80 environmental rules and regulations on the way out under Trump.

Among other requirements, factory farms no longer have to report emissions. Neither do oil and gas companies. In 2017, Trump announced his plan to withdraw the United States from the Paris climate agreement, although full withdrawal cannot happen until 2020. He also revoked an Obama executive order that set a goal of cutting the federal government’s greenhouse gas emissions by 40 percent over 10 years.

Of the 47 climate-related studies conducted by the USDA since Trump took office, 45 did not receive any promotion, according to the POLITICO report.

The studies focussed on the effects of climate change, rather than its causes, which is a contentious and overly political issue at this point. Instead of asking why CO2 levels are rising, USDA scientists focussed on what will happen when they do.

Each study was peer-reviewed and cleared by the non-partisan ARS. But that did not guarantee that any climate-related study, statistically significant or not, would be promoted by the current administration.

For example, one of the studies that the department refused to promote found significant evidence that rice loses nutritional value in a carbon-rich environment. That is a particularly important piece of information for 2 billion people around the world whose diet consists mostly of rice.

As CO2 levels continue to rise, the rice-based diet of millions of people will become increasingly less stable. But as pertinent as this study seems to be, the Trump administration refuses to draw attention to its findings and others like it because they demonstrate the negative impact of climate change on the agriculture industry.

The following information was collected from a series of tweets explaining the nature of POLITICO’s recent investigation and shows just how damning the findings are for the Trump administration. Here’s how it went down.

A few months ago, POLITICO reporter Helena Bottemiller Evich caught wind of a big USDA study looking at how rising CO2 leads to a drop of nutrients, protein, minerals, and B vitamins in rice.

Evich spoke with a scientist who worked on the study and later told her that they suspected the USDA was going out of its way to avoid promoting the study’s findings.

This was a red flag for both Evich and the scientist she spoke with.

Until that point, we hadn't heard many complaints about climate issues out of USDA, esp. compared to the high-profile political controversies at EPA and the Interior Dept. Trump officials hadn't made waves by ripping down climate data off USDA websites or anything like that.

Curious, Evich starting calling other climate scientists. That’s when she heard about the “more subtle” ways the USDA was undermining its own work on climate change.

The department’s efforts to hide its own work on climate change go beyond the burying press releases. USDA blog posts and social media accounts show a clear pattern of avoiding the topic, according to Evich.

“Even the word ‘climate’ itself appears to have now fallen out of favor, along with phrases like carbon, greenhouse gas emissions, adaptation, and sequestration,” she wrote in the report.

After reviewing years of USDA press releases and conducting over 40 interviews, Evich concluded that while the department was continuing to pour resources into studying climate science, it was extraordinarily reluctant to publicize its work.

A department spokesperson told POLITICO that there have been “no such directives within the department that discourage the dissemination of climate-related science.”