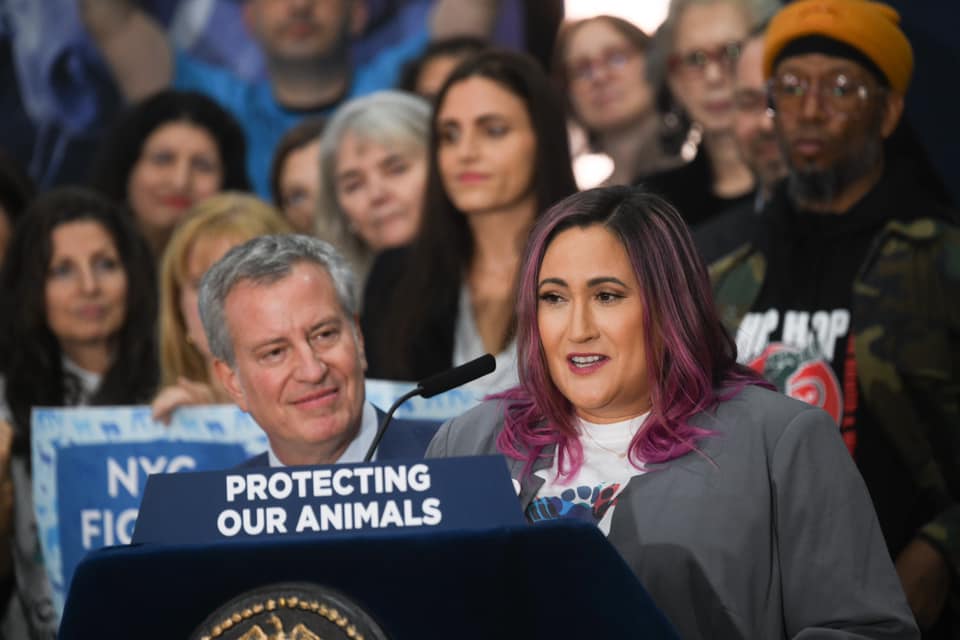 “The Best Way to Change the World Is to Understand It”: Faunalytics Is Using Research to Drive Change for Animals

Voters For Animal Rights (VFAR) helps elect candidates who support animal protection, lobby for strong laws to stop animal cruelty, and hold elected officials accountable to humane voters. Allie Feldman Taylor, president of VFAR, sat down with Sentient Media in December to walk us through the organization, its campaigns, and the major recent successes.

Sentient Media: Let’s start with the basics of Voters For Animal Rights. Why are you doing what you do as an organization, and how are you making an impact for the animals?

Allie Feldman Taylor: Voters for Animal Rights is an all-volunteer grassroots organization that focuses exclusively on political advocacy for animals in New York. We mobilize voters and organize lobbying efforts to give a voice to animals. Through the political process, we are building a coalition of advocates seeking to strike at the heart of what allows systemic animal abuse and cruelty to persist, which is a lack of fundamental rights and laws to protect them. We work to gain legally enforceable rights for animals by codifying animal rights into law.

We started VFAR in 2017 because we saw a dire need for political advocacy for animals in New York State. Protesting and animal rescue is effective in changing public opinion, and I’ve done a ton of it in my lifetime.  Pushing corporations to change their policies is also moving the needle. But I firmly believe that if we aren’t changing our laws, then we’re going to have to continue protesting for a very long time. We absolutely need to codify rights for animals into laws so that corporations, farms, labs, zoos and other industries that are exploiting animals for profit cannot continue these abusive practices. It’s amazing that we’re seeing so many corporations agreeing to stop using fur, and different companies agreeing to stop doing certain practices. However, without a law, there is nothing binding them or preventing them from changing their minds in the future. If a circus commits to no longer using animals or a company commits to stop selling clothing with animals’ fur, but there isn’t a law in place to restrain them, there is nothing to stop them or another entity from using animals again later on. That’s one reason why we absolutely must have local, city, and federal laws — we can’t trust the corporations and industries that make profits off animals to do the right thing just because they say they will.

What is different about Voters for Animal Rights is that we’re a political organization. We are a 501(c)(4), not a 501(c)(3), which means that we can endorse candidates for elected office, and that’s really where our leverage is incredibly helpful in getting legislation passed for animals. For every election season in New York City and in New York State, we send out questionnaires to candidates, asking them about a range of different topics on animal rights. We evaluate their positions, voting history, knowledge,  and commitment to animal rights, and then make an endorsement for the best candidate in the race. In some instances, we recommend who you absolutely should not vote for. Our members are often single-issue voters, and our endorsement can help a candidate win or lose elections that are often decided by just a few hundred votes. For example, in one memorable race in Queens, an anti-animal incumbent lost her re-election bid by only 133 votes out of over 20,000 cast.

Sentient Media: What about yourself? Is there a specific moment in your past that was pivotal or definitive to your interest in this cause? What’s shaped your activism or advocacy the most?

Allie Feldman Taylor: Every animal rights activist has that “aha-moment” where you realize what we as humans do to animals is abhorrent. And when you discover that, your life is never the same. My story is probably not too different from anybody else’s. Like many, my journey started with a love of companion animals. Growing up in New Jersey, my mom rescued dogs, so we always had two or three rescued family members. Then I saw the documentary “Food Inc”. There is a scene showing in graphic detail how a cow is slaughtered and processed for food. That was my aha-moment. After college, I went to work in politics on a number of campaigns and worked for several politicians. It was a terrific learning experience, and I developed connections that have helped me pass laws to this day.  But I didn’t feel impactful because there just wasn’t much political action happening for animals at the time. I decided that if I wanted to stay working in politics, I wanted the focus to be around animal rights.

In 2011 I went to work at Nyclass on the campaign to ban horse carriages in New York City — and saw an opportunity to utilize elections to advance animal rights. In 2013 I ran the  “Anybody but Quinn” campaign for New York City Mayor. There was one stubborn candidate running for New York City mayor who was opposed to any type of progress for animal rights, so we ran a campaign to ensure that literally anybody but her got elected to run the city. We did this because we knew that if we didn’t defeat her, that there would be zero progress for animal rights for the next eight years. We also worked to elect dozens of City Council Members who supported our platform. Animal activists came together to prove that if you oppose animal rights, voters are paying attention, and there will be consequences at the ballot box. It was a pivotal moment for our community.

That was really a turning point for the animal rights movement to realize the strategic role we can play in actively electing leaders who are going to help pass the laws we need so badly.  I think that set the stage for where we are today, where we have a City Council, Speaker, and Mayor who are incredibly empathetic towards animal rights issues.

Sentient Media: You’ve had a couple of major successes in the near past. With those in mind, and with this longer-term perspective that you’ve talked about now, how has the world changed for the better in the time you’ve been working with the cause?

Allie Feldman Taylor: In the past year, New York City signed nearly 10 bills for animals into law. For Voters For Animal Rights, the biggest bright spot this year in New York City was banning the sale and possession of foie gras in all food service establishments. Another key victory was passing a law making it a misdemeanor crime to steal wild birds off of New York City streets and use them for shooting contests out of state. Until now, the penalty was a violation — equivalent to a traffic ticket — but thanks to this new law, bird poachers can face real consequences. We also passed legislation to create an official Mayor’s Office of Animal Welfare — the first of its kind in this country to coordinate animal policies across all New York City agencies and departments. The City Council also passed legislation that will protect carriage horses from working on city streets in hot and humid weather. Now humidity will be taken into account. Of course, I think horse carriages should be banned — period — but this is a good step. The Council also passed a law requiring new buildings to use bird-safe glass, preventing thousands of birds from crashing to their deaths. And under the leadership of Speaker Corey Johnson, a hearing was held on a new bill to ban the sale of fur. Those last two bills are particularly exciting for me — to see elected officials who once disagreed with us on animal issues do a total 180 and start not only agreeing with us but taking the lead on introducing ground-breaking animal rights legislation.  I love seeing elected officials grow in their compassion.

My hope is that other cities — of all sizes — will start their own political advocacy organizations, endorse candidates for elected office, and introduce their own local laws and ordinances to ban foie gras, the sale of fur, and more. We have heard from folks in Florida, Portland, Connecticut, Toronto, Chicago, Nebraska – even in the Ukraine — who have said, “I’ve seen the progress that’s happening in New York and I really want to start a local political operation here. Can you show me how to run a candidate endorsement process?” There is nothing that makes me happier than those kinds of phone calls. So we’re now going to start helping out in other cities by giving activists across the country a toolkit that they can use to organize animal rights voters and introduce legislation in their hometowns.

Sentient Media: That’s great to hear. What about next, what are your plans for the future? What do you think are going to be most impactful things you’ll be working on?

Allie Feldman Taylor: In New York City,  local elected officials can only serve a maximum of two four-year terms, which means that two-thirds of the City Council, in addition to the Speaker and the Mayor will be term-limited out of office in 2021. That means many of our allies will no longer be in office, so it is imperative to elect a new class of pro-animal rights Council Members. For 2020, we are heavily focusing on building Voters For Animal Rights’ capacity so we can be impactful in the 2021 elections. We’ll be recruiting, training, and organizing volunteers to get ready to knock on doors and hit the phones to get our people elected into office.

In terms of policy issues at the state level, we are working on a bill that would ban the sale of dogs, cats, and rabbits in pet stores. And since it is an election year for the NY state senate, we’ll be holding our elected officials accountable for passing that bill. At the local level, we’re going to continue to fight for the fur sales ban and work on legislation that would ensure humane education is being taught in every school. We are also going to fight to stop a proposed deer hunt in Staten Island being pushed by Borough President Oddo because we believe strongly that New York City must be a place where humans and wildlife coexist.

Sentient Media: In general, when you think of these kinds of plans thinking to the future, what’s the planning horizon in general? Are you thinking three years in advance, something like that?

Allie Feldman Taylor: Politics doesn’t move linearly, so it’s hard to put a timeline on legislation.  For example, the wild animal circus ban took a decade to get done, but the foie gras ban took us one year — it’s no coincidence that legislation is moving much more quickly as more animal rights advocates are elected to office. And of course, we urge every vegan, vegetarian, or anyone who cares about animals to register to vote before the 2020 elections.