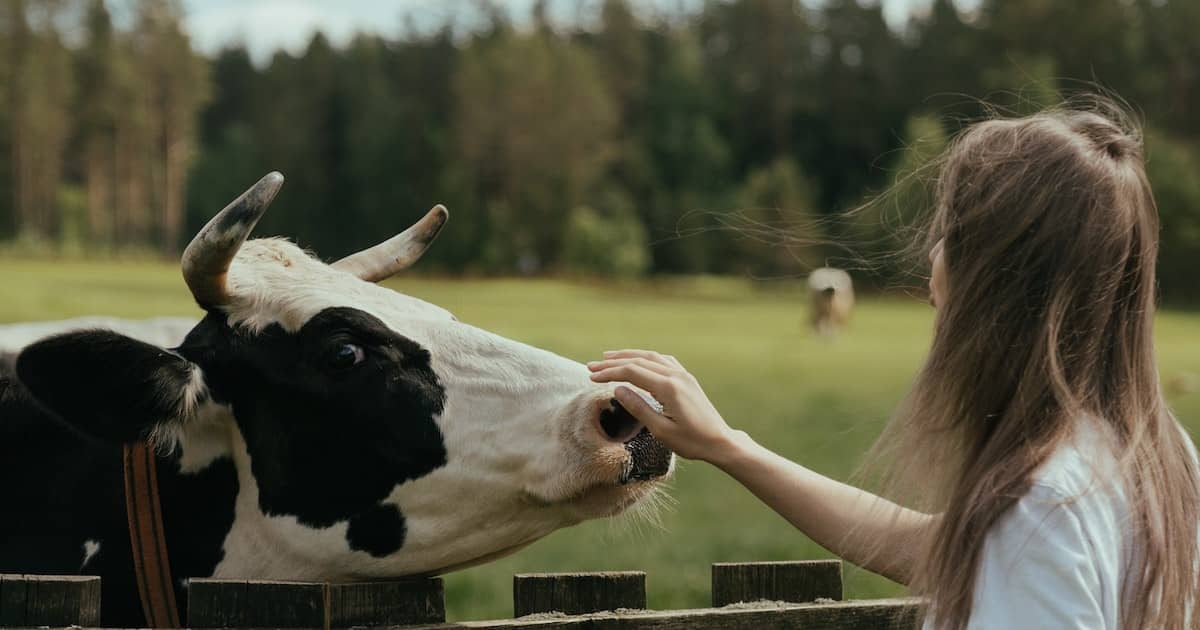 When I attend public events like weddings or festivals where food, but not anything vegan, is being served, I’m disappointed but not usually upset. I eat beforehand or know that I’ll have to disappear for a short time in quest of plant-based food.

That changes, however, when it’s a fundraiser for an animal rescue shelter, and the only vegan fare on the menu is lettuce, as I found several years ago. Just lettuce. Everything else was meat-based, farmed animals in every dish. Because it was a catered event where hundreds of people were being served, I couldn’t do as I normally would in a restaurant and ask the chef to create a vegan dish.

Instead, I watched as attendees munched the carcasses of farmed animals, who weren’t as lucky as the hundreds of cats and dogs that the shelter had saved. The experience weighed so heavily on my animal-loving conscience that I didn’t attend another fundraiser for that animal shelter for years.

My experience begs a question that sounds similar to one that Dr. Melanie Joy, psychologist and author of Why We Love Dogs, Eat Pigs and Wear Cows, has posed: Why rescue some animals but essentially endorse the slaughter of others for food?

That disconnect prompted Animal Place, one of the country’s oldest and largest sanctuaries, to introduce its Food for Thought program, which helps nonprofit organizations adopt humane menu policies. Thanks in part to that campaign, shelters around the country are starting to publicly make the connection between the animals they rescue and those they serve, both literally and figuratively.

Menus are being aligned with missions

Food for Thought was launched around 2012 because of the disconnect that Kim Sturla, Founder of Animal Place, witnessed in her former position as director of a shelter. A piglet named Zelda had found her way to the shelter where the staff was desperately trying to find her a home, even as they ate pig at the shelter’s fundraiser. “Food for Thought was created to bring awareness to this disconnect and help shelters and rescues (and other non-profit organizations) adopt humane menu policies,” says Jessica Janson, Food for Thought’s central campaign coordinator.

To help shelters adjust their menus, Food for Thought offers two avenues, both of which cost shelters nothing. Shelters and rescues can apply for grant opportunities to serve vegan or vegetarian fare at events—Food for Thought offers $1,000 grants for vegan food, $250 for vegetarian—or become Policy Leaders, meaning that they agree to serve only vegan fare at all events. The journey is often an evolution for shelters. “Many will first try it out by hosting an event, after which they’ll usually adopt a policy,” Janson says. No matter whether rescues choose the grant or Policy Leader route, Food for Thought offers numerous free resources, including event hosting advice, tips on soliciting vegan product donations, sample menu policies, and guides to adopting menu policies and working with veg-friendly caterers.

Food for Thought has currently awarded 81 grants to organizations and has 424 Policy Leaders, which include not only shelters and rescues but also environmental groups and wildlife conservation and social justice organizations. Its reach is worldwide, its campaign active in other countries, too.

The decision to become a Policy Leader was a no-brainer for Allison Lange, co-founder of A Dog’s Life Rescue, a Los Angeles-based organization that specializes in rescuing feline and canine “underdogs.” “My co-founder and I are vegan and we’ve always served vegan food at our fundraisers,’ she says. “When Food for Thought contacted us recently about joining, it made sense, as we can now say we have an official policy about the food we serve, which will add strength to our mission.” Since the rescue’s founding in 2005, it’s received nothing but positive comments about the food it serves at events.

A Dog’s Life Rescue is not alone. Numerous organizations report that their vegan events are sell-outs, and Food for Thought has collected hundreds of testimonials from the participating organizations on the positive impacts of serving vegan fare at fundraisers and events. One observation that might alleviate a common worry that shelters have? “Many report there’s no change in donations as a result,” Janson says.

One point that’s worth noting: Although many staff and volunteers say that they change their personal eating habits after their shelters team with Food for Thought, asking individuals to go vegan isn’t part of Food for Thought’s campaign. “If staff, volunteers, and donors want to consume non-plant-based products at home, that’s their choice,” Janson says. After all, not everybody in the rescue world grasps the concept of speciesism and sees the irony of rescuing some animals while eating others. “Shelters are simply asking [their staff and volunteers] to eat plant-based foods during fundraisers and events so they can uphold their mission to save all animals.”

Crunch the numbers, though, and it’s clear that more work needs to be done to raise awareness about humane menu policies among animal shelters and rescues. The Humane Society of the United States estimates that the nation has 3,500 animal shelters, and while Food for Thought’s 400-plus Policy Leaders includes more than just animal shelters, the shelters are only a part of the initiative. While some shelters undoubtedly already have humane menu policies without yet affiliating with Food for Thought, others have opted not to participate. So what might be holding them back?

Some clues come from Best Friends Animal Sanctuary in Kanab, Utah. For years, it served vegetarian fare at its all-you-can-eat buffet available daily for visitors, volunteers, and staff. When I first volunteered there in 2012, I was surprised to find cheese on the menu, especially given Best Friends’ mantra to “save them all.” Its rationale for serving animal products was simple: “It wasn’t a priority to serve only vegan food,” says Jon Dunn, educational learning specialist for Best Friends and co-founder of Vegan Grand Rapids in Michigan. He played an instrumental role in encouraging Best Friends to eventually adopt a vegan menu policy. “We were going full-speed ahead to end the killing of cats and dogs in shelters, and other issues—such as the plight of farmed animals—took a back seat.”

For the Allen County SPCA in Fort Wayne, Indiana, appeasing meat-eating donors is one of its biggest obstacles. Twelve years ago, the former executive director insisted on a vegan menu at its signature event, and the event flopped as a result. “Attendees were incredulous, and even I have to admit that the eggplant marinara was pretty flavorless,” says executive director (and vegan) Jessica Henry. “When it was my turn to oversee the event, my board insisted that we offer meat options to appease attendees, who, of course, are also donors.”

Some volunteers with Allen County SPCA have also resisted, with a few opting not to attend a volunteer picnic last year in protest of only vegan fare being served. “Maybe they felt we were pushing a veg agenda, but it did hurt our volunteer coordinator, who’s also vegan, that they would feel so strongly about the issue,” Henry says. Ironically, by skipping the event, one of the protesters missed receiving a huge award. “I’m hopeful a lesson was learned, as I try to live by example and gently remind my staff and volunteers that we’re here to save animals, not eat them,” Henry remarks.

Consider, too, that shelters and rescues already face an abundance of daily challenges. “Managing an animal shelter (or really, doing anything in animal welfare) is already so challenging,” Henry says. “Pressing us to do even more can begin to feel overwhelming in an arena that’s already rife with compassion fatigue.”

Should shelters advocate for farmed animals?

Shelters certainly bear a responsibility to save the lives of cats and dogs, and a 2020 Best Friends report shows that they are having success: The number of animals killed in U.S. shelters decreased from 733,000 in 2018  to 625,000 in 2019.  The outstanding question is whether shelters should be equally accountable to land and sea animals, of whom more than 55 million are killed annually for food, according to Food for Thought. Embracing a vegan menu policy is a relatively simple way, Janson says, for a shelter organization to be a humane leader in the rescue community, give recognition to all types of companion animals, and truly be no-kill.

Ask ethical vegans in the rescue world whether shelters should work to safeguard the lives of all animals, and the answer is a resounding yes. “Organizations should be driven by actions that align with their core values,” Dunn says. “If not, you’re rescuing one only to sacrifice another.”

That’s a sentiment that Lange echoes, too. “If you’re in the rescue world and you’re seeing the pain and fear that cats and dogs face, it’s impossible not to be aware that all beings feel those emotions,” she says. “If we’re asking people to have more compassion for dogs and cats, even bunnies, then we need to examine our own mission and make sure we extend that kindness to all beings.”

There is, though, reason to hope. In 2018, for instance, Best Friend’s cafeteria switched to all-vegan fare—“the hardest item to replace was the cheese, as a lot of people missed that right away,” says Brianne Figgins, restaurant manager at Best Friends—and its annual nationwide conference began serving only vegan food in 2016. According to Dunn, the move has been a success because the food carries as much weight as other things like the conference location and schedule and isn’t an afterthought, as is the case with many conferences. “When you give people an excellent experience with vegan food, they won’t miss the meat and may even leave with a new appreciation of vegan food,” he says.

And three years ago, despite earlier challenges, the Allen County SPCA transitioned to serving only vegan and vegetarian food to staff and volunteers, and now offers only one meat entrée at fundraisers. “It was a double standard to save some animals while serving others,” Henry says. So why not make the full transition to offering only vegan fare? “In the Midwest, we get a lot of negative feedback from people who equate a ticket price with a hearty meal that in their minds should include meat,” she says. “If people are so impacted by not having a meat option at an event that they choose not to attend, I’m then unable to fund our mission to save and serve domestic animals, and so I begrudgingly support a committee decision to offer limited meat dishes to appease attendees who demand it.” She notes, though, that with the recent initiatives that her shelter has implemented, it’s moving closer to adopting a meatless menu policy.

If the past few months are any indication, the pandemic and climate change concerns, including more frequent and intense natural disasters and increasing pollution, may bring even more shelters to the meatless table. “Since COVID-19 and the environmental changes we’ve been seeing recently, we’re seeing a shift,” Janson says. “Many shelters that weren’t ready to change their menus are now ready to do so.” For farmed animals, the change couldn’t come soon enough.