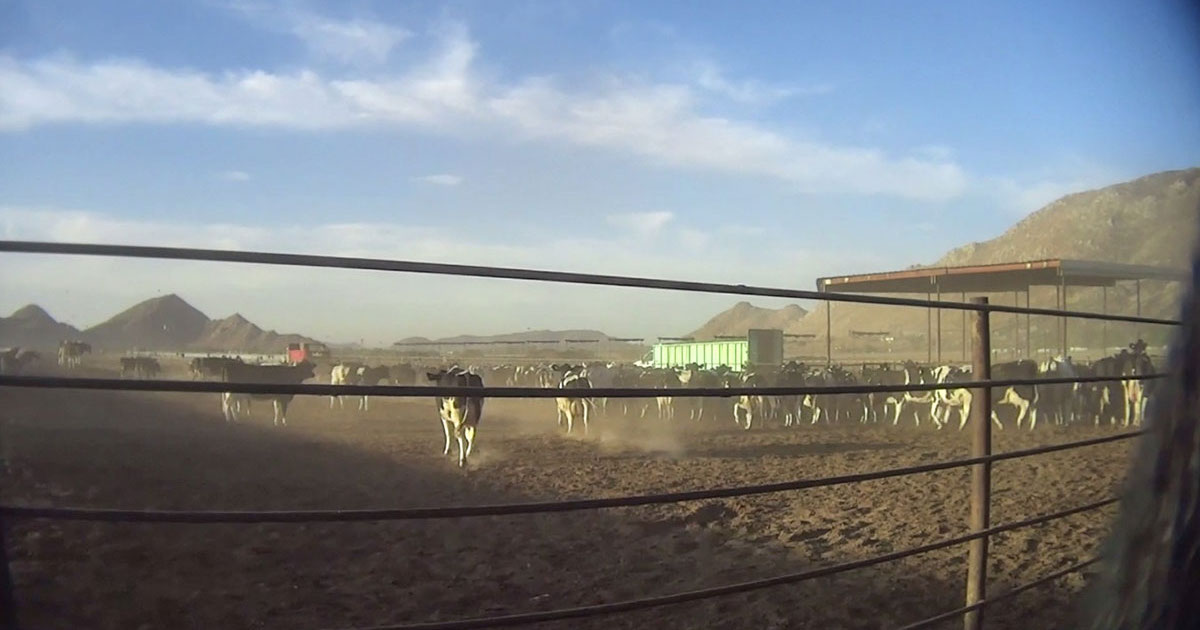 As part of a public awareness campaign inspired by the investigation, Emmy-nominated actor and animal advocate Kate Mara joined ALDF to share an account from Dick Van Dam Dairy. The footage below is graphic. If you are sensitive to violent imagery or have children in the room, please avert their eyes.

The lawsuit, filed in California Superior Court for Riverside County, alleges Dick Van Dam Dairy supervisors and staff control the cows through the use of violence, according to an ALDF release obtained by Sentient Media. The release further states that the staff was found “repeatedly jabbing cows’ faces, legs, and udders with splintered wooden canes and metal pipes, kicking them in the face and udders, twisting their tails so hard the bone breaks, slamming metal gates on them, and poking fingers in cows’ eyes, among other painful methods regularly deployed on the farm.”

The release goes on to state that “newborn calves who require care or medical attention are left to die—their bodies decomposing in the same pens with the mother cows. Injuries to and infections in the cows’ udders emit puss and even turned the milk pink from blood, requiring the dairy to discard it. Lame cows hobble over floors slicked with mud and feces, forced to be milked despite their injuries. Cows who cannot walk attempt to crawl away from workers who continuously hit them, attempting to make the cows stand. Multiple times, workers misused machinery to lift downed cows up in the air by their hips—suspending them many feet above the ground—and then leaving them in the dirt to die.” This is standard practice in the dairy industry.

“The abuse and neglect towards cows and calves exposed through the investigation demonstrate this is not just a single employee or incident, but company-wide practices condoned by management,” says Animal Legal Defense Fund Executive Director Stephen Wells.

Now, ALDF wants the dairy to be shut down permanently. The lawsuit also asks for the defendants to be “barred from possessing or working with animals in any capacity.” And until Target conducts an independent investigation of the Dairy Farmers of America’s entire supply chain, ALDF believes Target should stop carrying Dairy Farmers of America products, including DairyPure and TruMoo. The independent investigation would “include spot checks and surprise inspections to ensure suppliers comply with their own corporate policy,” according to a representative from ALDF.

“Undercover investigations are one of the only ways to expose the cruelty imposed by the industrial animal agriculture industry,” says Wells. “The industry wants to keep the truth hidden because they know the public would not tolerate the conditions animals endure.”

Update: Following the release of this article, Target issued this statement: “We believe in the humane treatment of animals and expect those who do business with us to do the same. Dairy Farmers of America, who sells its brands to many major retailers, assured us that this farm is not connected to any products sold at Target.”