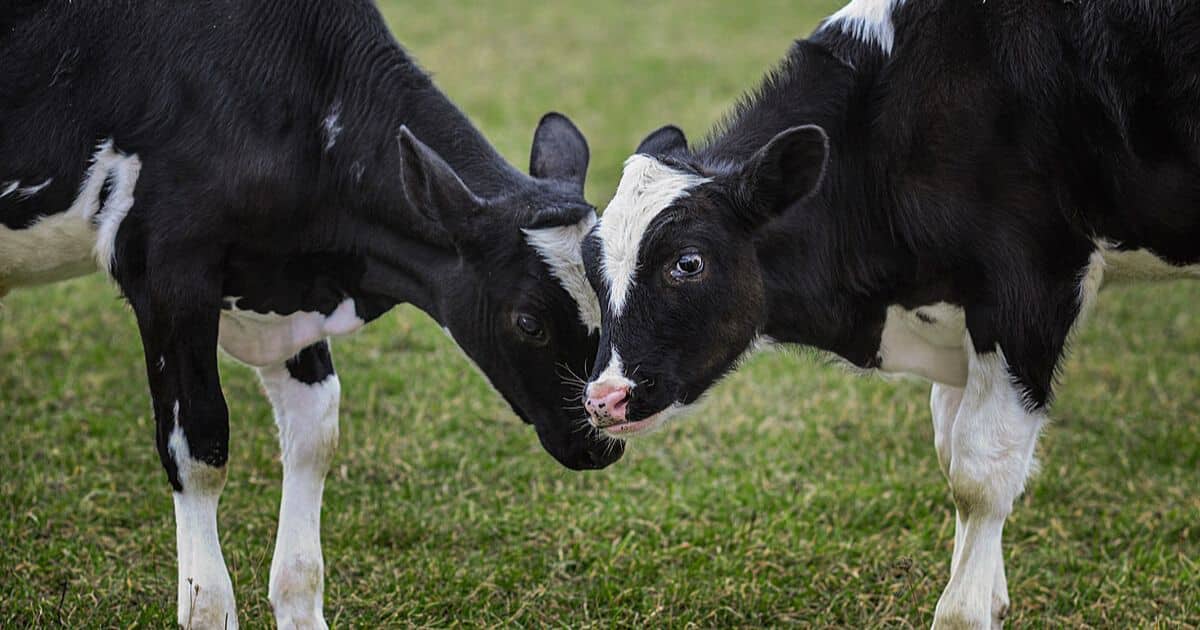 Two New York state cows have set off a nationwide conversation about the status of farmed animals and the legal rights of those working to prevent their slaughter.

On August 2, New York state police arrested and charged Asha’s Farm Sanctuary operator Tracy Murphy with third degree grand larceny for her refusal to return two cows to a local beef farm, according to news reports. Murphy argued the farmer had not presented sufficient proof of ownership of the cows to persuade her to release them.

If convicted of the class D felony, the sanctuary owner will have a criminal record for her efforts to protect the lives of farmed animals. McKee Farms raises cows to be slaughtered for beef.

The two cows — known as Blackie and Hornee at McKee Farm and Ishmael and Little Willow at the animal sanctuary — left the livestock operation and arrived at Asha’s Farm Sanctuary on July 16. Murphy, who called law enforcement the day she discovered the cows, was arrested two weeks later.

After news spread of Murphy’s refusal to return the cows, farmers began protesting outside of the sanctuary. Meanwhile, across social media sites including Facebook and TikTok, users allied with either vegan activists or farmers rights sounded off on the events that transpired. Animal advocates including Renee King-Sonnen of Rowdy Girl Sanctuary and celebrity actor Joaquin Phoenix also weighed in.

Murphy has since pleaded not guilty and was released from jail on her own recognizance.

The Newfane story has raised questions about the legal obligations of farm animal sanctuary owners who live near livestock operations, while high rates of incarceration in New York state adds some context, if not explanation, for what struck some animal rights activists as an aggressive response from Newfane law enforcement.

The following is a brief timeline of events based on local news reporting and a Facebook post from the Niagara County SPCA.

How Often Do Cows Wander?

It is extremely common for animals to wander off and onto other people’s property, whether they are dogs or farmed animals, says Brian Shapiro, New York State Director of The Humane Society of the United States.

In Texas, a cow named Houdini would slip out of the confines of Renee King-Sonnen and her husband’s cattle ranch every day. Even after that ranch turned into an animal sanctuary, Houdini continued to find their way to munch on the grass off of the property, near the side of the highway. About thirty times per month, King-Sonnen tells Sentient Media, a state trooper would show up at the cattle ranch — and later, Rowdy Girl Sanctuary — to let the staff know that Houdini had escaped again and needed to be retrieved.

When people come to fetch their stray cows from her property, King-Sonnen says, “you just believe them.”

King-Sonnen also tells the story of Magic, a cow who wandered onto a neighbor’s 600-acre property in Angleton. When the sanctuary owner hadn’t seen Magic for a few days, she panicked: “All the land around us is cattle ranches. I thought, “Oh my god, what if she got out on a neighboring property?” But after calling around, King-Sonnen eventually heard back from a local cattle rancher who said: “There is this black Brangus-type heifer out there running with the herd. […] It ain’t mine. Want to see if it’s yours?”

King-Sonnen said that the reverse situation happens all the time, where other cattle ranchers’ cows have been found on her sanctuary’s property. Typically, King-Sonnen calls around to let people know when an unfamiliar cow is found, “because we would want them to do that for us.” As a vegan, King-Sonnen would rather keep the cows and protect them, but legally, cows are considered property. So, King-Sonnen helps claimed cows return to their owners even as she acknowledges that it is a tough situation.

Legal Ownership of Cow Can Be Documented

In the case of a wayward animal, “It is likely the farmer will have some sort of documentation indicating ownership,” writes staff attorney Chloe Johnson by email. Farm Commons staff are not involved in the aforementioned case in New York.

A cow owner can prove ownership of the animal by providing vet bills or a “bill of sale,” suggests Johnson. Other ways that help validate a cow’s identity are ear tags or brands. Cows of a certain breed might be accompanied with breeding documentation or they “might be registered with an organization supporting that breed’s existence.”

Animals are property under New York state law, no matter how people feel about it, says Shapiro. Though he could not speak to the details of this case, Shapiro acknowledged that “the mission of the two property owners are perhaps not inline.” He hopes neighboring property owners could find common ground in acknowledging “the aspect of the animal being property and also the humane mission of the sanctuary.”

Shapiro also thought it was unfortunate that law enforcement got involved, resulting in the arrest of one of the parties in the Newfane cow conflict.

A felony charge can result in a maximum of up to seven years in prison, though there is no minimum requirement for incarceration. WGRZ reported that Murphy, who is white, was in shackles during her arraignment in court, something atypical for people facing charges of nonviolent crimes.

New York state locks up its residents in jails and prisons at a higher rate than almost all other democracies worldwide, according to the Prison Policy Initiative (PPI). The vast majority of the people booked in jails are not a risk to public safety, according to PPI. Every year, about 267,000 people go to jail in New York state, at a rate of about 1,346 people per 100,000 state residents, which is just slightly lower than the national average, according to a PPI analysis.

While a disproportionate level of policing occurs in Black and Brown communities, Prison Policy Initiative reports that upstate New York residents experience a higher rate of incarceration compared to people in the rest of the state.

Long Tradition of Cattle Ranching Can Be Challenged

It was cattle ranchers—and not vegans—who, riding in on horses, helped Rowdy Girl Sanctuary’s residents evacuate when the sanctuary’s land was flooded three times, says King-Sonnen.

“Animal agriculture [is] an archaic, barbaric food system that’s rooted in violence. Cattle ranchers have been doing this for generations, so their families’ history is tied to it. They are just good people trying to do what they’ve always done,” King-Sonnen told Sentient Media. “When a bunch of vegans try to interfere with their way of life by being obnoxious—vegans can be very obnoxious, and I am a vegan, and I can be obnoxious, but I do it from a former cattle rancher perspective—[most] cattle ranchers think vegans are crazy.”

Despite the long history of cattle ranching, traditions can change, points out King-Sonnen. “Just because things are laws today doesn’t mean they’re going to be laws 100 years from now. […] The laws that have been upturned in history are because of people that go against the grain. They go against what is deemed lawful. And those are the people that can end up starting uprisings and change things.”

New York State Police, the Niagara County District Attorney’s office, Niagara County SPCA, Asha’s Farm Sanctuary and The McKee Farm did not respond to requests for comment for this article.

What Happens to Dairy Cows When They Get Old?