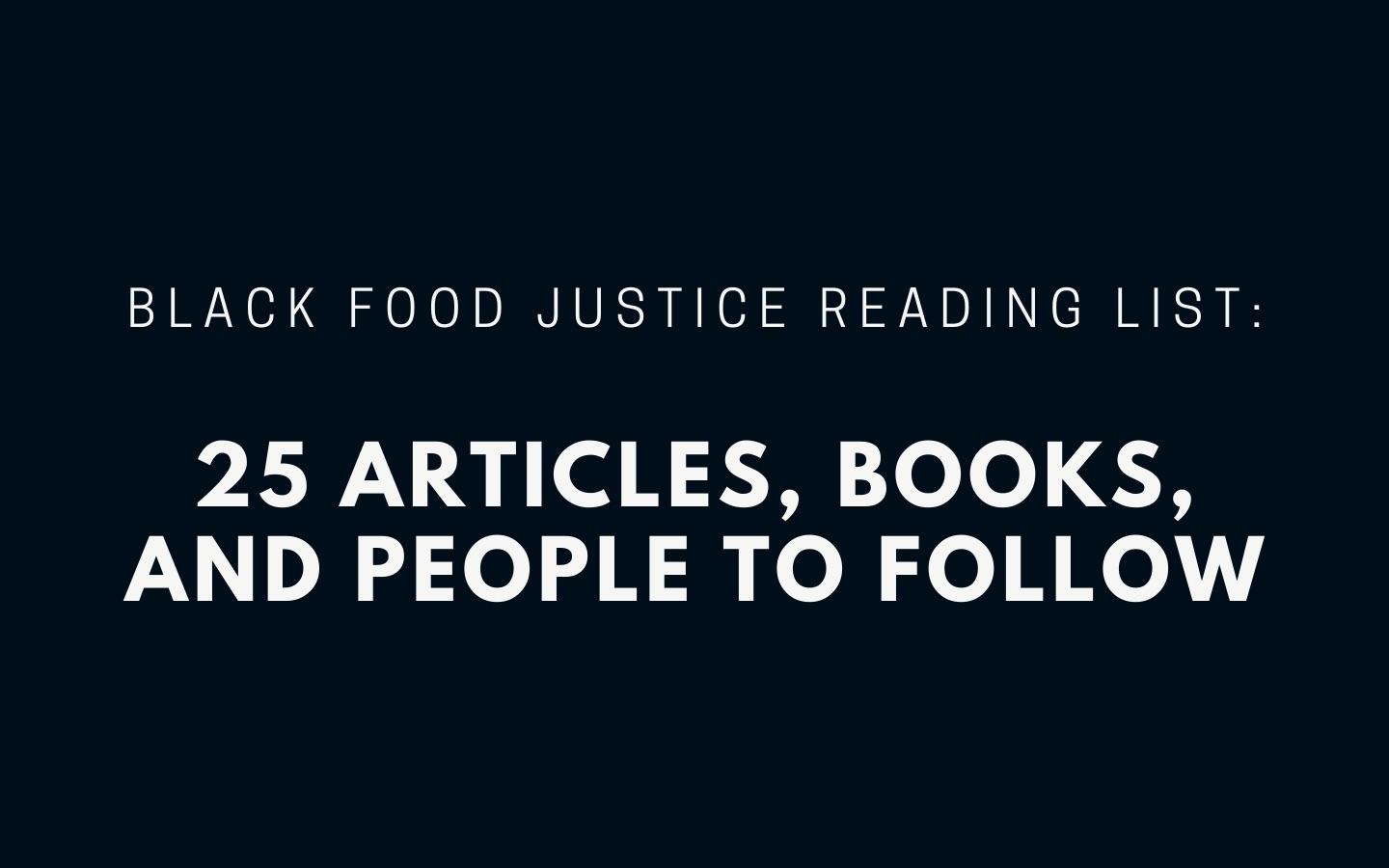 Here at Sentient Media, we stand with the Black community in the fight against social injustice. We condemn all acts of racism, discrimination, and the silence that gives these ills their voice. We want to center this article around those fighting for equality and justice within our food system—and in their everyday lives.

Why Animal Rights Activists Must Stand Up for Black Lives

“Those involved in the animal rights movement know all too well how frustrating it is for people to scoff at our message, even when we’re armed with evidence of blatant injustice…But when people view the footage for themselves, they can no longer declare ignorance, only apathy. That’s why we must stand, and march, together”—Zachary Toliver for PETA.

Attention White Animal-Rights Activists: “Black Lives Matter” Is Not Ours for the Taking

“Redirecting the phrase to encompass “all lives,” including animals, is unethical and unsupportive of the racial justice movement. We should be giving “Black Lives Matter” the space to spread its meaningful message”—Marla Rose for VegNews.

“Even the most radical, abolitionist, anti-speciesist non-Black vegan should resist the urge to ever make a comparison between the Black Lives Matter movement and animal rights. Why? The reasons why are multiple, but let me start with the most basic: You already enjoy the opportunities and privileges that Black people are fighting for. You are an observer of oppression, not the oppressed”—Summer Anne Burton for Tenderly.

“But every time I’m at a protest and a reporter takes a photo of me, I’m grateful because I know it’s gonna help animals in two ways. One: It’s gonna make people think about what I’m protesting—for example, the abuse that animals in circuses go through. And two: When people of color see what I’m doing, hopefully it reinforces their own activism.”—Nikki Ford for PETA.

Systemic Racism in the Food System

People of Color are at Greater Risk of COVID-19. Systemic Racism in the Food System Plays a Role

“Outside of being Black, obesity, diabetes, and hypertension have been identified as the comorbidities that make coronavirus more deadly amongst anyone worldwide,” said Daphene Altema-Johnson, the food communities, and public health program officer at John Hopkins University’s Center for a Livable Future. “When you look at the United States, Blacks have higher rates of these chronic conditions and the reasons they have those comorbidities are…driven by poverty and by food insecurity.”

According to the U.S. Bureau of Labor Statistics, Black Americans make up 12.3 percent of the nation’s workers but are overwhelmingly represented in animal slaughtering and processing, trucking, wholesale grocery, and food service.

A million tons of feces and an unbearable stench: life near industrial pig farms

“I watched it mist off of the property of these massive pig farms into black communities. And these African American communities are like, ‘We’re prisoners in our own home’” U.S. Senator Cory Booker said in a podcast denouncing the North Carolina hog industry.

At a Slaughterhouse, Some Things Never Die; Who Kills, Who Cuts, Who Bosses Can Depend on Race

“The few whites on the payroll tend to be mechanics or supervisors. As for the Indians, a handful are supervisors; others tend to get clean menial jobs like warehouse work. With few exceptions, that leaves the blacks and Mexicans with the dirty jobs at the factory, one of the only places within a 50-mile radius in this muddy corner of North Carolina where a person might make more than $8 an hour.”

Surrounded by crops, lacking food: A health paradox in the Mississippi Delta

The state with the most poverty in the nation, Mississippi also has the highest rate of food insecurity of any state. Holmes is one of five counties in the state where more than one-third of people are food insecure. “My body literally trained itself not to eat,” Dolecia Cody, a Missouri resident, told Clarion-Ledger.

Food apartheid: the root of the problem with America’s groceries

Farm subsidies in the United States go predominantly to white farmers, which has led a group of black farmers to sue the U.S. government for discrimination. The Guardian interviewed Karen Washington, co-founder of Black Urban Growers—an organization committed to building networks and community support for Black farmers in both urban and rural settings.

Determined to be Nourished

Food insecurity frequently occurs as less healthy foods—calorie-rich, and nutrient-deficient—are often more affordable and easier to get. And though they’re less nutritious, they’re more filling, so people with less money can stave off hunger for longer. But the cumulative effect of this can be catastrophic—high blood pressure and cholesterol, diabetes, obesity—all of which occurs at disproportionately higher rates in African American communities, and all of which leaves people with weakened immune systems and more vulnerable to other illnesses and diseases, such as COVID-19.

Want to Eradicate Hunger in America? Take on Racism

“You cannot take on poverty and hunger without taking on historical and contemporary discrimination,” Dr. Mariana Chilton, a professor of public health at Drexel University, told The Nation. “If we are just fighting to strengthen SNAP [formerly food stamps], or for better jobs and higher wages—we’ll make little progress. We have to go deeper to the root causes.”

Genetics is not why more BAME people die of coronavirus: structural racism is

There is no clear evidence that higher levels of conditions such as type-2 diabetes, cardiovascular disease, and weakened immune systems in disadvantaged communities are because of inherent genetic predispositions, but there is evidence they are the result of structural racism. All these underlying problems can be directly connected to the food and exercise you have access to, the level of education, employment, housing, healthcare, economic and political power within these communities.

The fastest-growing vegan demographic is African Americans. Wu-Tang Clan and other hip-hop acts paved the way

Only 3 percent of Americans are vegan, and some estimates are closer to 1 percent. But in the Black community, it’s more than double that. Rappers like KRS-One and Kendrick Lamar are paving the way: “Hip-hop is the biggest influence on planet Earth when it comes to young people. It’s the CNN for the black community. If we can move it in a green direction, the world will move in a green direction. It’s going viral right now.”

GW Chew is a vegan chef, activist, and founder of The Veg Hub—a nonprofit restaurant bringing delicious plant-based food to his community in East Oakland, CA. Watch as Chef Chew prepares his signature barbeque “chicken,” made from his own signature plant-based recipe. As he says, it “looks like chicken, tastes like chicken, but it ain’t chicken.”

The “Forty Acres” refers to “40 acres and a mule”—a promise made to freed slaves in an order issued by Union general William T. Sherman in January 1865. “If former slaves had actually gained ownership of land, and thus the opportunity to become economically self-sufficient and build and pass on wealth, the history of race relations in the U.S. would have been profoundly different.” Anna Kang reports on the market bringing healthy food to underserved communities.

Books About Race, Food, and Agriculture

‘So You Want to Talk About Race’ by Ijeoma Oluo

Ijeoma Oluo guides readers of all races through subjects ranging from intersectionality and affirmative action to “model minorities” in an attempt to make the seemingly impossible possible: honest conversations about race and racism, and how they infect almost every aspect of American life.

Farming While Black: Soul Fire Farm’s Practical Guide to Liberation on the Land by Leah Penniman

Farming While Black is the first comprehensive “how-to” guide for aspiring African-heritage growers to reclaim their dignity as agriculturists and for all farmers to understand the distinct, technical contributions of African-heritage people to sustainable agriculture. At Soul Fire Farm, author Leah Penniman co-created the Black and Latinx Farmers Immersion (BLFI) program as a container for new farmers to share growing skills in a culturally relevant and supportive environment led by people of color.

Freedom Farmers expands the historical narrative of the black freedom struggle to embrace the work, roles, and contributions of southern black farmers and the organizations they formed. Whereas existing scholarship generally views agriculture as a site of oppression and exploitation of black people, this book reveals agriculture as a site of resistance and provides a historical foundation that adds meaning and context to current conversations around the resurgence of food justice/sovereignty movements in urban spaces like Detroit, Chicago, and New Orleans.

The Invisible Vegan is a 90-minute independent documentary that explores the problem of unhealthy dietary patterns in the African-American community, foregrounding the health and wellness possibilities enabled by plant-based vegan diets and lifestyle choices.

Harlem Grown is an independent, non-profit organization whose mission is to inspire youth to lead healthy and ambitious lives through mentorship and hands-on education in urban farming, sustainability, and nutrition.

Grow Where You Are

Grow Where You Are is a dynamic full-service social enterprise in the field of local food systems. They partner with organizations and individuals to bring food abundance to communities and design, install, and maintain multiple public and private spaces where food is produced using Agro-Ecological principles.

East Oakland Collective’s mission is to push back against racist policies and fight for meaningful, lasting change. One way it does that is to ensure its community has access to food.

People of color are disproportionately subject to poor food quality because food choices are so often determined by affordability and proximity. Kirsten Ussery-Boyd and the crew at Detroit Vegan Soul are serving healthy, hearty meals to their Detroit community.

This list pales in comparison to the number of activists helping bridge racial gaps, organizations bringing healthy foods to food deserts, conversations to be had, and useful resources out there. Sentient Media is committed to adding more Black voices to our community in the weeks, months, and years to come.