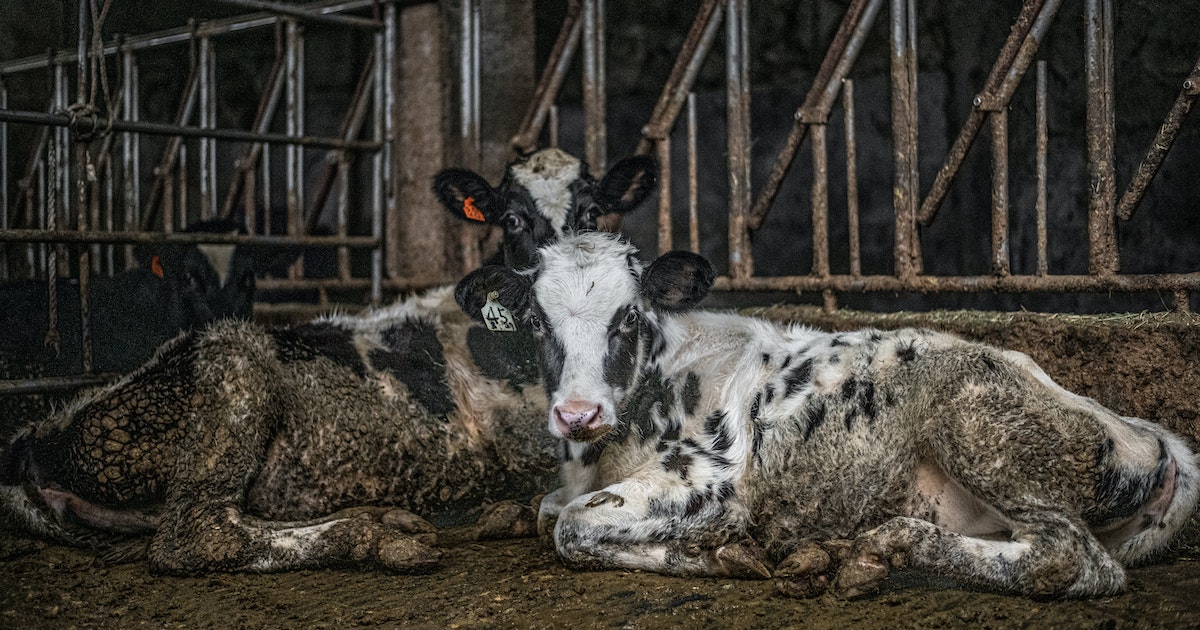 The question, did animal agriculture cause COVID-19, seems to be on everyone’s mind—and for good reason. The coronavirus pandemic has wreaked havoc across the globe, touching families with the tragedies of lost lives, lost income, and missed opportunities. As the virus spread, so too did questions surrounding its origin, its physical effects on the body, and what role, if any, animal agriculture played in its emergence.

There remain many unknowns and no shortage of guesses as to the origin of COVID-19. There is no confirmed evidence of direct infections arising from eating animal products from factory farms. However, there are many unshakeable links between modern animal agriculture and COVID-19 that we will explore in this article.

Zoonotic diseases, also known as zoonoses, are diseases that originate in animals and are passed onto humans. A pandemic occurs when that disease jumps rapidly and often uncontrollably between human beings. Assuming the form of viruses, bacteria, or fungus, these diseases can be transmitted at any site of humans and animal interaction, whether the animals are alive or dead.

The Center for Disease Control estimates that six out of every 10 known infectious diseases have the potential to be zoonotically transmitted, while three out of every four newly-discovered infectious diseases come from animals. Though unpleasant, zoonotic transmission is a natural, inevitable process, since diseases are simply a part of life on this planet.

What is less natural are the increased risks of zoonotic transmission posed by animal captivity. Keeping animals in cages or enclosures is stressful for animals, pretty much no matter how you cut it. Stress, whether low-level yet chronic or intense and prolonged over a period of days, can compromise an animal’s immune system, leaving them more susceptible to disease infection which can then be passed onto humans.

At zoos and other sites of exploitation, animals are plunged into an unfamiliar environment, surrounded by throngs of people with outstretched hands and probing eyes; all it takes is a little empathy to understand how this can be stressful. Petting zoos are known sources of zoonotic transmission. Diseases such as Salmonella, Cryptosporidium, Q-fever, ringworm, and rabies are known to have been transmitted from animals to people in these environments.

Even in larger zoo facilities, the risks are present. Captive elephants are considered a reservoir of tuberculosis (TB) in the United States. Considered one of the top 10 most deadly diseases in the world, zoonotic transmission of the disease via elephants occurs more frequently than one might expect. In 2019 alone, eight elephant keepers contracted TB at Point Defiance Zoo.

It’s not unreasonable to conclude that cages cause disease. But the stressful conditions at petting zoos and actual zoos pale in comparison to concentrated animal feeding operations, also known as factory farms, which have already spawned many global pandemics to date and have since been termed as a “perfect storm environment” for infectious disease.

Is there a connection between animal agriculture and the current COVID-19 pandemic?

Because of the wildlife wet market’s implication in the novel coronavirus, there have been calls from Western countries like the United States to ban wet markets. However, this is an inappropriate solution for many reasons. The habit of pointing the finger at other countries and cultures traces a long, and ongoing, history in the U.S. Victim blaming often results in xenophobia, sinophobia, and racist attacks.

Further, not all wet markets sell wildlife or live animals, so lumping these markets into a single category is inaccurate. This lack of nuance can be especially harmful since wet markets provide food for millions of people around the world, offering affordable prices along with community gathering spaces.

Does eating meat or other animal products put people at risk of becoming infected?

Currently, there is no evidence suggesting that eating meat or other animal products will cause an infection of the coronavirus. However, eating meat does put certain people at risk of infection, and when someone becomes infected, the chances of it spreading to other people is obviously much greater.

As the pandemic gripped the U.S., businesses across the country temporarily shuttered in order to stem the spread of infection. Initially, this included slaughterhouses and meatpacking plants. However, after panic over meat shortages reached mainstream media and the White House, an executive order was signed which classified meatpacking operations as critical infrastructure. Employees were forced back to the plants, working in close quarters with often inadequate protection. Predictably, infection rates began skyrocketing and people started dying.

Not only did the executive order put workers at risk, but their families and communities were also exposed to the disease. Because the workforce of meatpacking plants and slaughterhouses is made up of lower-income people, who are often people of color and undocumented immigrants, they are especially vulnerable to the many costs of the pandemic and may not have access to adequate resources and insurance.

The American diet is composed largely of meat and animal products, so much so that these food items are deeply woven into national identity and conceptions of masculinity. The concept of a meat shortage is something that most people in this country refused to deal with. During the pandemic, it has been the unrelenting demand for meat that kept meat factories open, exposing countless people to the coronavirus. In this way, eating animal products is directly connected with putting people in harm’s way of infection.

Modern animal agriculture poses a serious risk for future disease outbreaks and pandemics. The Food and Agriculture Organization recently highlighted farmed animal health as “the weakest link in our global health chain.” In 2009, the swine flu pandemic originated in factory farms of the U.S. and rapidly spread worldwide, killing thousands of people. In April of 2020, as the coronavirus pandemic was in full swing, the United States Department of Agriculture found a strain of avian flu virus at a commercial turkey farm in South Carolina. Even though this H7N3 strain hasn’t yet spread, the threat remains.

Other diseases have emerged that possess the potential for becoming a pandemic, even if no human to human transmission has occurred so far. Bovine spongiform encephalopathy, also known as Mad Dow Disease, was discovered in the United Kingdom in the 1970s. The disease spreads among cows when they are fed the discarded parts of cows and other farmed animals which is blended into their feed as a cost-saving measure. As of 2019, 232 people have been infected, and every single one of them has died.

The reason why modern animal agriculture poses such a threat of disease is thanks to the conditions in which animals are kept. Virtually all animal products in the U.S. come from factory farms, and this proportion is growing internationally as well. Further, of all the conditions in which animals are held captive, factory farms are by far the most stressful. Factory farms are designed to prioritize profit above animal wellbeing, cramming thousands of animals together, often indoors for the entire duration of their short lives. The chronic stress of these conditions causes immunological suppression in animals, inviting new diseases to take root.

Chickens, for example, are forced to grow larger breasts, while cows are made to produce more milk. This selection process severely limits the genetic diversity of farmed animal populations, rendering every individual nearly genetically identical. So when a virus infects one animal, it can spread much more quickly through the rest because it does not encounter any genetic variation that it must evolve beyond. In fact, it can grow stronger and more dangerous for the lack of genetic speed-bumps.

Factory farm proponents often claim that farmed animals are happy enough given their ability to survive these crowded, dark, filthy conditions for the few short months or years they are alive. But what’s really keeping these animals alive en masse is a deluge of antibiotics which are applied liberally throughout an animals’ lifetime, whether they are sick or not.

This rampant overuse of antibiotics winds up in waterways and the human food supply, generating antibiotic resistance which poses another huge threat to human health. The World Health Organization proclaims antibiotic resistance to be one of the most urgent threats humanity faces. Not only do factory farms create ideal conditions for emergent diseases, but they seriously hamper humans’ ability to fight off these diseases with conventional medicine.

Modern animal agriculture is also one of the primary drivers of deforestation in places like the Amazon rainforest, where forests are mowed down to provide cattle ranchland and vast space for mono-crops to feed factory-farmed animals. Pushing ever deeper into virgin forests brings people into contact with wild animals carrying novel diseases.

All of these factors are why experts have long issued dire warnings about modern animal agriculture. As Dr. Michael Greger, author of Bird Flu: A Virus of Our Own Hatching, puts it: “If you want to create global pandemics, then build factory farms.”

How can we prevent future pandemics?

The answer to how we can best prevent future pandemics is complex and will differ based on location. Because factory farms in the U.S. carry a significant amount of risk when it comes to the risk of a pandemic outbreak, the country bears a greater responsibility when it comes to zoonotic prevention.

For the U.S. and other wealthy Western nations, and particularly those higher-income people within these countries, the easiest solution is to stop or significantly reduce their consumption of meat and animal products. This alone would significantly reduce deforestation, antibiotic resistance, and direct zoonotic transmission threats. Adopting a plant-based diet is easier than ever these days, with the proliferation of new and innovative products such as plant-based meats, and more resources than ever to help people on the journey towards reducing animal consumption.

While connections between animal agriculture and COVID-19 might exist, the larger threats of future pandemics should not be discounted. Modern animal agriculture has created breeding grounds for novel diseases in our midst and continues to hamper our ability to defend ourselves from disease outbreaks. As long as animals continue to be held in factory farms, and the demand for meat in places like the U.S. remains strong, we should already be bracing ourselves for the next pandemic.

Pandemics, Liberation, and Animal Ag: An Interview With Peter Singer