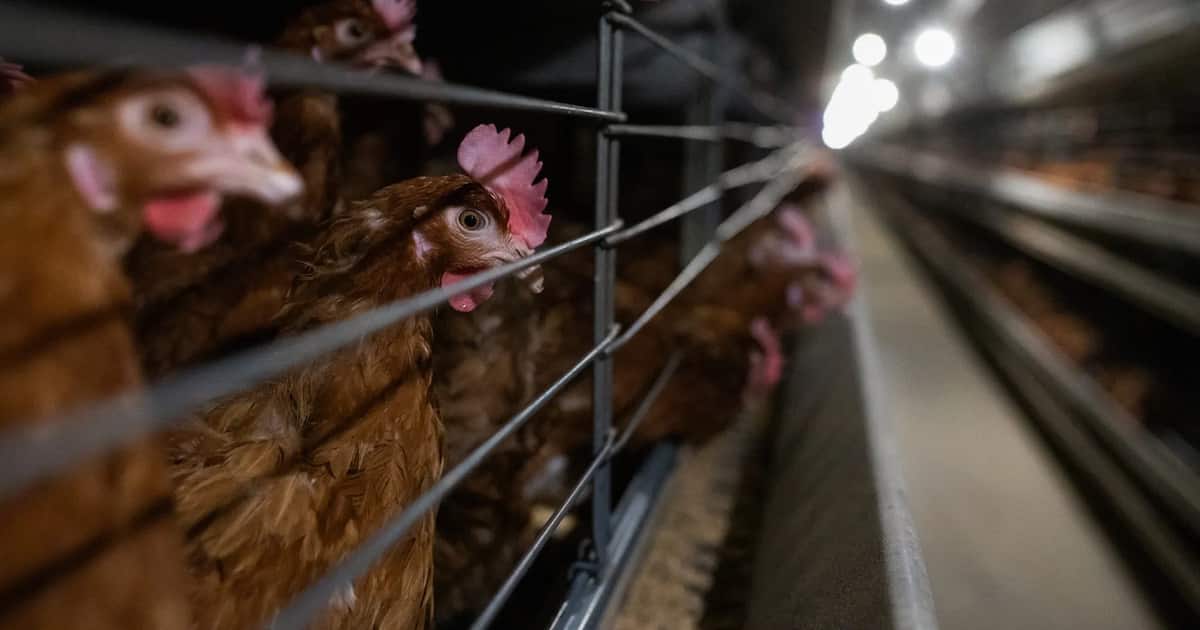 The shocking way that 95 percent of eggs are produced in the United States might make your eyes water. Ammonia from chicken waste that can irritate the eyes piles up inside the buildings where these eggs are farmed. The waste and dust in chicken barns can also make your lungs sting and cause respiratory problems, but this environment is the only one known by chickens and the other birds who make eggs for human consumption, even though birds’ bodies absorb twice as much gas as mammals when they breathe. Egg-laying birds are mothers kept in overcrowded cages or barns, victims of a food system that consistently prioritizes profits over their health. Egg farming makes up 21 percent of sales in the highly-consolidated poultry industry. It’s part of a system that imposes huge costs on humans as well as birds, via predatory contracts for farmers, working conditions that are hazardous to farmworkers, public health dangers, and environmental destruction.

What Is Egg Farming?

Egg farming is the practice of raising birds—such as chickens, ducks, and geese—to produce eggs for human use. The eggs used for eating are known as table eggs, but fertilized eggs can be hatched in order to grow chickens for their meat or other purposes. Regardless of this distinction, most eggs were harvested on industrial factory farms.

People raising birds for their eggs are part of the poultry industry, which sees farmers work under unfair contracts that leave them indebted to larger companies. While making money is the primary goal of egg farming, most of that money goes to the biggest companies. According to a Transfarmation Project report, 27 percent of poultry and egg farms in the U.S. made 98 percent of sales in 2017.

In her book “Project Animal Farm,” Sonia Faruqi reports on her visits to a Canadian egg farm that was not making money thanks to the industry’s high-volume, low-margin business model. That farmer opted not to expand his business in egg farming and instead made more money raising free-range turkeys.

How Much Does an Egg Farmer Make?

There is no guarantee that an egg farmer in the U.S. will make any money, as their incomes vary from flock to flock even when they follow all the rules set out by the poultry industry. These variations in profits are caused by disease, the condition of the birds when they arrive from the company a farmer contracts with, and the costs that an egg farmer must take on to pay for upgraded equipment as required by their contracts.

According to University of Georgia Extension guidelines, an industry-friendly source of information, contracted egg farmers who grow eggs to be hatched elsewhere are estimated to make about $10,000 to $15,000 per house each year, though this average is higher for farmers who have paid back the minimum $280,000 they must pay to invest in each house.

What Are the 4 Methods of Farming Eggs?

In egg farming, eggs are taken from chickens living in small spaces: whether caged, cageless, or “free-range.” Read the Humane Society’s egg deciphering guide to learn more about the different welfare standards that exist in egg farming. While they represent small improvements on the cage systems that most laying hens are reared in, the terms “cage-free,” “free-range,” and even “pasture-raised” and “certified organic,” are silent on many other animal welfare issues, including starving hens to get them to produce more eggs, and beak-cutting.

Most layer hens are kept in battery cages. In these cages, each hen must sit in a space roughly the same size as a sheet of paper (67 square inches), crowded next to several other chickens with no means of escape. The birds stand on wire floors that hurt and damage their feet, with nothing for them to scratch, and no way to take a dust bath. The room offered by these units is tiny compared to the ideal minimum of 4 to 10 square feet per chicken in indoor living spaces.

Like battery cages, enriched colony housing units are another type of cage. These cages are slightly larger, with 116 square inches per hen. Each wire-floored cage also has a nesting box, perch, and scratching pad. Cage systems, even when featuring slight improvements to let chickens express some natural behaviors, still stack birds on top of each other and fail to give them space outside where they can explore and dust bathe.

Cage-Free (but not That Free)

“Cage-free” living for egg-laying hens simply means there are no cages, but it is a loosely interpreted term in the industry. In the U.S., companies can opt-out of being certified and graded by the USDA as cage-free, while still calling their eggs “cage-free.” Cage-free chickens do not have access to the outdoors.

Free-Range (in an Enclosed Area)

“Free-range” simply means that there is at least an opening to the barn or shed where the birds are housed. Because the term is poorly regulated, it is unclear how much time the hens actually spend outdoors, or if the birds have any tall plants to hide in. Hens whose eggs are marketed as free-range, and sold with the USDA grading label, must have unlimited access to food, water, and the outdoors during their laying cycle.

How Do You Start an Egg Farm?

To produce eggs like most farmers do first means signing a contract and making a big investment in land, poultry houses, and equipment. Before getting into any debt and before signing any contracts, however, you should ask some hard questions of yourself and the poultry company you’ll be working with. Laura Klauke of Rural Advancement Foundation International writes that it is important to be persistent in requesting “a copy of your contract up-front,” and to get any promises to change the contract in writing. You may also want to read about the conditions under which most egg farms raise their laying hens, some of which are listed below.

Within a week of being born, laying hens get their beaks cut with a searing hot metal blade or a cold knife, without any anesthesia to block the severe pain of the procedure. Debeaking leads to persistent pain in an area with many nerve endings. Birds use their beaks to handle food, make nests, explore, clean themselves, and protect themselves from other birds and animals.

Dust and water bathing is impossible for a hen in a modern factory farm, where they are housed in battery cages. Cage-free housing does allow chickens dust baths, according to The Humane Society.

To get birds to meet the year-round demand of food companies supplying eggs to grocery stores and restaurants, egg farmers must starve older mother chickens for one or two weeks at a time. This tricks their bodies into being able to give birth a couple more times. This practice is called forced molting.

Laying hens are left with weak limbs and difficulty in moving around. “The constant egg production combined with [a laying hen’s] complete inability to exercise make her prone to osteoporosis and broken bones,” writes disability and critical animal studies scholar Sunaura Taylor in “Beasts of Burden.” While battery-caged hens’ bodies are naturally meant to handle 60 eggs per year, the industry norm is 250.

When older laying hens are no longer producing eggs at the rate deemed most efficient for profit, they are sent off to be slaughtered.

Learning the full facts about egg farming might make many people reconsider whether they’re really worth the cost.

The human body can survive without eating eggs, which are loaded with fat and cholesterol.

Egg Farming Is Terrible for the Environment

The air in an egg farming barn is toxic with ammonia, to the point where workers should be advised to wear masks. The ammonia concentration can get so severe on the ground of a hen house that it can burn chickens’ bodies where they have to lie in their own waste. Ammonia pollution from factory farms is a leading cause of death from air pollution. It has been found to impact biodiversity in plants, and it can damage leaves and soil.

The overuse of antibiotics in chicken farming has resulted in the spread of fatal and incurable diseases, and this includes egg farming. Because most chickens are kept in battery cages, they experience heat stress and are exposed to bacteria from living in their own and each others’ waste. Instead of improving these housing conditions, food companies compel farmers to use antibiotics to try to contain the effects of bacteria such as E. coli and Salmonella, both of which cause food poisoning in humans.

There Are Egg Substitutes

Many recipes that call for eggs can be adapted to be made with egg alternatives. It just depends on what you are using the eggs for—binding, rising, moisture, texture, or appearance.

Male Chicks Have No Place in Egg Farming

Because male chicks do not lay eggs, they are suffocated to death or blended alive. The euphemistic term “culling” is often used by people in the poultry industry to describe this type of slaughter.

Chickens cooperate and keep track of each other. According to VINE Sanctuary’s website, the rooster’s famous crow is a sign of how social chickens are: “Cock-a-doodle-doo!” means “All OK over here!” Chickens have friends, socialize, and they love to live freely in the outdoors.

The simplest response to egg farming is to attempt ways of living that will reduce harm toward others in the most practical way that you can. As an individual, maybe you can try to reduce how many eggs you eat, or you can choose foods that do not have eggs in their ingredients. If you are committed to better farming practices and food systems, you could look into groups working to alleviate the plight of farmed chickens, farmworkers, and farmers.

The way most eggs are harvested in the U.S. and around the world treats chickens as machines and not like birds who need and enjoy their freedom. Egg farming is an integral part of the chicken farming industry. Hens raised for their eggs suffer in dirty, overcrowded, and dark conditions that prevent their natural behaviors like foraging in the grass, dust bathing, spreading their wings, and ruffling their feathers.