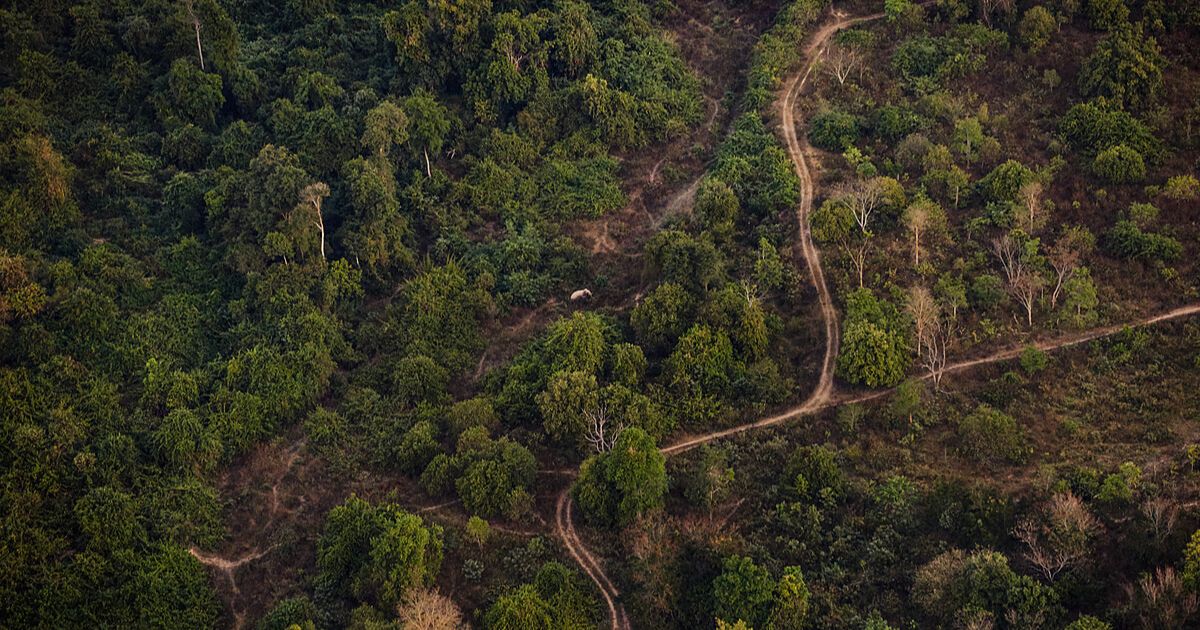 The United Nations reported that 1 million plant and animal species were threatened with extinction in 2019, with many just decades away from a tipping point. The same report also found that three-quarters of land-based environments and two-thirds of marine-based environments have been detrimentally altered by human activities.

In order to reduce habitat loss and slow extinction rates, we have to understand how human activities threaten and endanger ecosystems.

Humans impact the environment in a variety of damaging ways. Extracting natural resources, polluting air and waterways and razing wild landscapes are some of the most damaging examples industrial destruction. These activities can destroy some or all of an entire ecosystem, wiping out the plants and animals that call these ecosystems home.

As the climate crisis continues to raise temperatures worldwide, experts say continued human encroachment on wildlife threatens the biodiversity that is the hallmark of wild ecosystems.

There are currently 77 animals listed as “extinct in the wild” by the International Union for Conservation of Nature (IUCN), an organization that publishes a “red list” of species on the brink of extinction. The IUCN also reports that over 41,000 species are threatened, though not on the brink of extinction, accounting for 28 percent of the total of all species assessed by researchers.

How Many Ecosystems Have Humans Destroyed?

Scientists have found that less than 3 percent of the earth’s total land can be considered to still have ecological integrity, a framework used for measuring restoration and mitigation efforts to manage and preserve ecosystems.

Humans are overusing the earth’s biologically productive land — including cropland, fisheries and forests — by at least 56 percent, which destroys the ability of these lands to provide important ecosystem services like storing carbon emissions or protecting wildlife. At least 75 percent of the earth’s ice-free land has also been significantly altered. The oceans are increasingly polluted as well, and the earth has lost over 90 percent of wetlands since 1700, according to reporting from the Guardian.

Between 2009 and 2018, he U.N. Environment Programme (UNEP) found the world lost about 11,700 square kilometers of coral — which is equivalent to 14 percent of the global total — while more than 30 percent of the world’s reefs have been affected by rising temperatures. Coral reefs are extremely important natural resources — home to about 25 percent of the ocean’s fish and a wide range of other species.

What Are the Ecosystems Destroyed by Humans?

According to a 2020 study published in One Earth, humans significantly altered ecosystems across an area the size of Mexico, as 58 percent of the earth’s land ecosystems experienced moderate or intense pressure from human activity. The authors also found that out of the earth’s 14 biomes and 795 ecoregions, 46 ecoregions spanning across 10 biomes have been highly affected by human-caused destruction, leading to severe ecosystem and biodiversity loss.

The Living Planet Index found a 68 percent decrease between 1970 and 2016 in population sizes of mammals, birds, amphibians, reptiles and fish, particularly severe in the tropical subregions of the Americas, where wildlife populations have decreased by 94 percent. Over 3 million species that live in the Amazon rainforest are now threatened by human-caused ecosystem collapse.

The oceans are also under threat. UNEP and other experts have projected that by 2050 there will be a 70-90 percent worldwide decrease in live coral reefs because of climate change, and that coral reefs may even become extinct within our lifetimes. Over one-third of marine mammals and one-third of sharks, shark relatives and reef-forming coral are now threatened with extinction.

How Do Humans Destroy Ecosystems?

One of the greatest threats to the earth’s ecosystems is the food on our plates. Humans destroy nature, accelerate climate change and endanger biodiversity — as a result of a more highly industrialized livestock-based food system.

One U.N. report found that more than one-third of the world’s land surface and nearly 75 percent of freshwater resources are devoted to producing food to feed a rapidly growing population. The report also found that in 2015, 33 percent of marine fish were being harvested at unsustainable levels. In a paper published in Science in 2006, scientists found that marine ecosystems were experiencing unprecedented population loss because of overfishing, estimating that marine biodiversity would eventing collapse by 2050 if humans continue along the same unsustainable trajectory.

Livestock production is one of the biggest drivers of climate change — animal agriculture alone is responsible for at least 16.5% of global greenhouse gas emissions. Animal agriculture is also a well-known source of air and water pollution, threatening local ecosystems by overloading waterways with fertilizer, manure and pesticides.

One of the world’s largest beef producers is the country of Brazil — cattle farming there is causing as much as 80 percent of Brazil’s deforestation. Brazilian cattle ranching accounts for the release of 392 million tons of carbon into the atmosphere every year, which is equivalent to 17 percent of the country’s total emissions. This figure does not include land use change, which would add even more to this figure.

If global meat consumption continues to grow  — and it’s already more than doubled since 1990 — human activities like cattle ranching will continue to destroy the earth’s most vital ecosystems, including the Amazon rainforest.

Hunting and fishing are two human activities that also destroys wild ecosystems. Whenever humans remove animals from their ecosystems — whether for food or sport — it harms ecosystems in direct and indirect ways.

For example, research shows that overhunting can kill forest trees because of the reduction of mammals that eat seeds  — posing a risk to the wider ecological dynamics of tropical forests.

In addition, overhunting can decrease species diversity, altering interactions between different types of animals and other creatures, disrupting migration and hibernation patterns and damaging natural food chains, leading to uneven population growth across species — all of which creates a negative impact on ecosystems.

Similarly, fishing can damage seabed ecosystems in unintended ways. A common practice in the commercial fishing industry is trawling, which drags up plants and coral or leads to bycatch, in which marine species such as dolphins, whales, sea turtles and sharks are caught unintentionally and discarded. Trawling stirs up the water in a way that increases sediment and blocks sunlight, creating ocean dead zones.

Invasive species are a major threat to ecosystems that threaten habitat loss and endanger biodiversity. Some species are introduced by humans to an area deliberately, including for pest control and pet imports. These deliberate introductions can have a detrimental effect on local ecosystems. For example, because pet pythons released in the Everglades have few natural predators there, their introduction has decimated local species. Invasive pythons have caused raccoon and opossum populations to plummet by 99 percent, effectively obliterating the populations of marsh rabbits and foxes in some areas.

Other species are introduced unintentionally through transportation or trade. For example, zebra mussels attach themselves to boats, which enables them to spread easily through bodies of water. The effects of these zebra mussels are akin to an “aquatic pandemic,” increasing the chances of algal blooms that kill native species.

Land use change is the human-led process of transforming natural landscapes, whether by direct or indirect action. The Intergovernmental Panel on Climate Change (IPCC) has found that land use change for agriculture can lead to significant habitat and biodiversity loss, as well as land and water degradation.

Converting wild landscapes to farmland or for other human uses has caused most of the world’s deforestation and desertification. Deforestation is the purposeful clearing of forested land, either through clear-cutting or selective logging to obtain wood for fuel, as well as for manufacturing, grazing and to grow crops like corn and soy for farmed animal feed. It can lead to biodiversity loss by disrupting the habitats of local species, one of the main causes of extinction. In 2021, 9.3 million acres of trees in the tropics were lost due to rising populations, agriculture and energy demands. Deforestation in the Amazon has forced animals out of their natural ranges as existing habitats are clear-cut, removing their sources of shelter, food and water. It also causes soil erosion and adds to climate change pollution by destroying natural carbon reserves like forests.

Soil erosion and land degradation can cause congested and polluted waterways, increased flooding, and loss of arable land through a process known as desertification. Desertification is a consequence of land degradation, often caused by overgrazing, leading to the deterioration of habitats as the land transforms into desert-like conditions. The U.N. has found that arable land loss is 30 to 35 times higher than the historical rate, and that over 12 million hectares of land is lost each year to desertification.

Pollution is the introduction of contaminants into a habitat with adverse consequences. Pollutants include everything from car exhaust and the burning of coal to sewage or pesticides, all of which negatively impact land, water and air.

The Environmental Protection Agency has discovered that over 20 percent of lakes and 30 percent of streams in the U.S. are polluted by sources like animal waste from industrialized animal agriculture, storm water, waste water, fossil fuels and fertilizers. Pollution from dairy farming, for example, causes water pollution, with pollution from animal waste and fertilizer making its way to oceans and causing one of the largest dead zones ever recorded in the Gulf of Mexico.

While most air pollution comes from energy use and production, researchers have concluded that fine particle air pollution from industrialized agriculture leads to over 17,000 deaths in the U.S. per year, the bulk of which comes from animal agriculture.

Research has shown that humans are depleting natural resources at almost double the rate at which they can regenerate. By 2050, humans will need 2.5 earths to meet our resource usage demands. The most exploited resources include sand, water, fossil fuels, palm oil, trees and soil. The overuse of these resources — caused by poor farming practices, overpopulation, logging and overconsumption — can create water shortages, oil and mineral depletion, forest cover loss and species extinction.

The expansion of agriculture — mostly for beef production — has been a primary driver of forest loss and degradation. On-farm food waste also has negative impacts, as the water, fuel and fertilizer resources used to produce, pack and transport the food ultimately go to waste too.

How Can We Reduce the Impact of Human Activity on the Environment?

The U.N.’s 2022 Sustainable Development Goals Report recommends that countries implement the following changes in order to reduce human-caused damages to the earth and its ecosystems:

The increase in industrialized animal farming across the globe is the primary driver of biodiversity loss and ecosystem degradation. In 2021, research supported by the U.N. Environment Programme predicted that devastating biodiversity loss will continue unless our food system undergoes radical change, like shifting to plant-rich diets.

Research has shown again and again that plant-based foods are better for the environment and result in lower greenhouse gas emissions than meat and dairy. A study published in PNAS in 2022 also reinforced the importance of an environmentally sustainable food system with less reliance on these foods.

Reducing your consumption of meat and reducing food waste are two of the most important individual climate actions you can take. You can also vote for politicians that demonstrate a commitment to crafting public policy to protect ecosystems.

How Does Cattle Farming Impact the Environment?