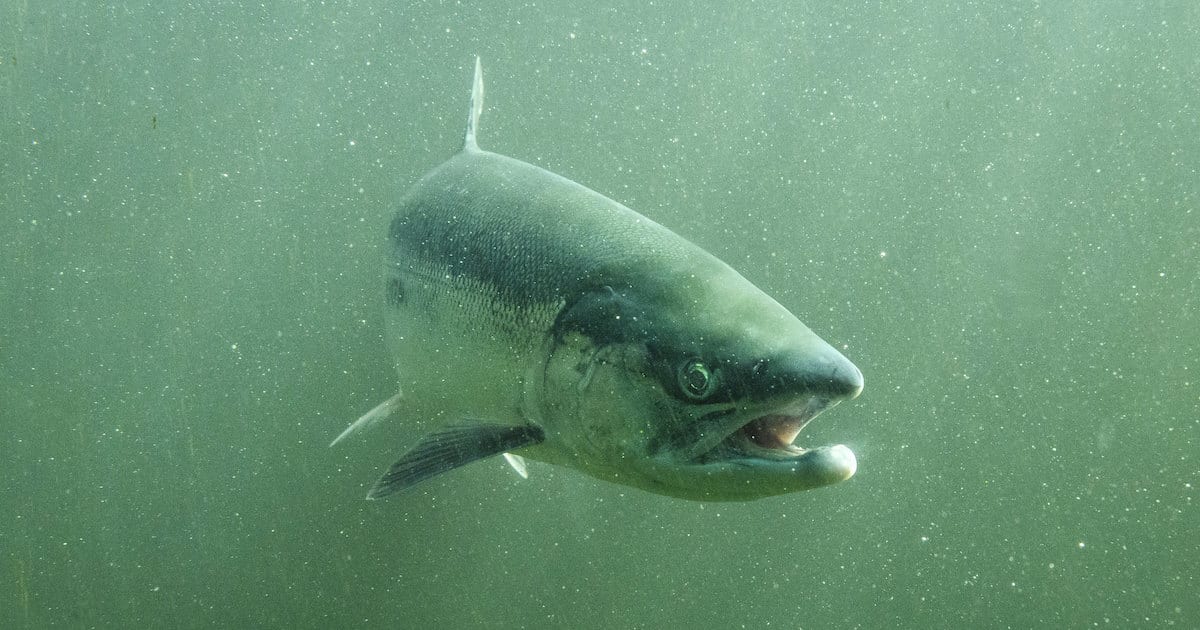 Was that really the alarm going off at 4:30 a.m.? It took my brain a few moments to register, not only what the alarm was for—but where the hell I was waking up. “We’re in Scotland. We’re here to film salmon farms!” a voice inside me yelled. I threw myself out of bed and got the kettle going. My co-investigator and I were on the opposite side of the loch that we needed to be and because the ferries wouldn’t be starting for another few hours, we needed to drive the long way around.

The previous day we’d been out on a reconnaissance mission to select which one of the seven farms in the area we’d likely be able to film. We needed good weather, calm water, steady nerves, and a heap of good luck to boot. It was mid-September so the grey was setting in, the temperatures were dropping and the winds were picking up.

As we set off, I was optimistic. The weather reports were looking great and although it was still dark, the air seemed clear. Almost an hour later and rounding the corner to the parking spot we’d selected, there was a vehicle already tucked in—likely an early morning fisher. Dammit! There was no way we could start pumping up the kayak without arousing suspicion here, so we moved on. Slightly farther up the road, there was a neat little forestry track that turned out to be a much better option: we parked there, completely out of sight.

I jumped out of the car and began pulling out the kit. I’d already timed myself pumping up the kayak and knew it’d take just seven minutes to be ready. What I hadn’t prepared for was the biting midges. The midge is supposedly synonymous with Scotland and little did I know, Scotland was bracing itself for a rare third wave after a population explosion in the highlands. Don’t quote me on the science, but previous experiences with mosquitoes have left me convinced that my O negative blood is more susceptible to biting insects. By the end of the morning, I had itchy red dots framing my eyes and covering my forehead—but let me tell you this, it was worth it.

With our life jackets strapped on, our cameras clipped in, and our paddles at the ready, we ran across the road. A two-person, bright orange kayak is not the stealthiest piece of equipment in an investigator’s toolkit, but it’s all we had. We launched straight off the beach, just as the sun was rising to reveal our target.

When you judge the distance to a fish farm from the shore, I can assure you from experience, it’s much farther than you think. Nevertheless, it was a short enough paddle out and the water conditions couldn’t have been more perfect for it. Without being able to see them, I knew the salmon were there. I could hear them launching into the air, flapping and slapping their bodies across the water’s surface to dislodge parasitic sea lice, to which farms like this are increasingly vulnerable due to the sheer number of animals confined within the anchored cages.

Sea lice are naturally occurring parasites that feed on skin, mucus, and blood. While adult wild salmon are well-adapted to coping with the odd louse, the intensification of salmon farming has led to fundamental changes in the density and occurrence of lice in coastal waters. Invasions are common and they have devastating effects, causing skin lesions, loss of scales, secondary infection—and ultimately death.

When lice escape to the local marine environment, they also have a significant impact on wild salmon and sea trout smolts. The youngsters’ fragile skin is not ready to cope with parasites on this level and they can be completely wiped out as a result.

As we pulled our kayak alongside the first cage, I clipped us to a mooring point and proceeded to carefully roll myself onto the circular walkway. Once steady on my feet, I lifted the net across the top of the structure—in place to keep birds out—just enough to get my camera inside with the fish and started recording.

Apart from the jumping salmon, it’s impossible to see what you’re filming. Sunlight simply doesn’t travel deeply enough into the water and our diving lights were limited. What I expected though was thousands of tightly-packed salmon swimming in monotonous circles, clear evidence of lice invasions to illustrate the suffering these animals endure, and the presence of lumpfish—small cleaner fish that are bred in their millions to feed on the lice infecting these farms.

We had about an hour before workers would arrive and did what we could, quickly working from cage-to-cage filming conditions underwater. We needed to show suffering across the board and demonstrate how, like factory farms on land, the conditions on intensive fish farms create a breeding ground for disease.

Confident we’d got what we came for, we climbed into the kayak and began paddling back to shore. Just as we landed on the beach, we could see farmworkers in their boat heading to the site. Although the farming industry insists that entering ‘restricted areas’ around fish farms is ‘unlawful and dangerous’, other activists investigating salmon farming have been issued apologies from the police over gaps in local knowledge of the law on access. So, while I could reasonably argue we had every right to film in public water, we figured it would be better to go unnoticed.

Back at the hotel we reviewed the footage and had our fears about the damage these places cause finally confirmed. The video revealed putrid conditions and parasitic lice.

Over the next few days, we also managed to get the drone up and film the shocking use of hydrolicers and thermolicers—non-medicinal lice treatments that either fire freshwater jets at the salmon or pass the salmon through heated water to remove sea lice. Between 2016 and 2019 around half a million salmon have been killed in these machines but millions more have surely suffered.

The debate about whether fish feel pain has endured for more than a decade but in 2019 a new review concluded that it’s highly likely fish experience pain and that pain-related behavioral changes are conserved across vertebrates. More specifically, a study published in 2019 found that salmon exposed to water temperatures above 28 degrees centigrade (which is exactly what happens in a thermolicer) were shown to behave as if they were in pain. Marine and veterinary researchers in Norway observed fish swimming faster, crashing into tank walls and shaking their heads.

When I say we need to end factory farming before it ends us, I couldn’t be more literal. Writing this in the middle of a global pandemic, I’m certain we’ve had our final warning.