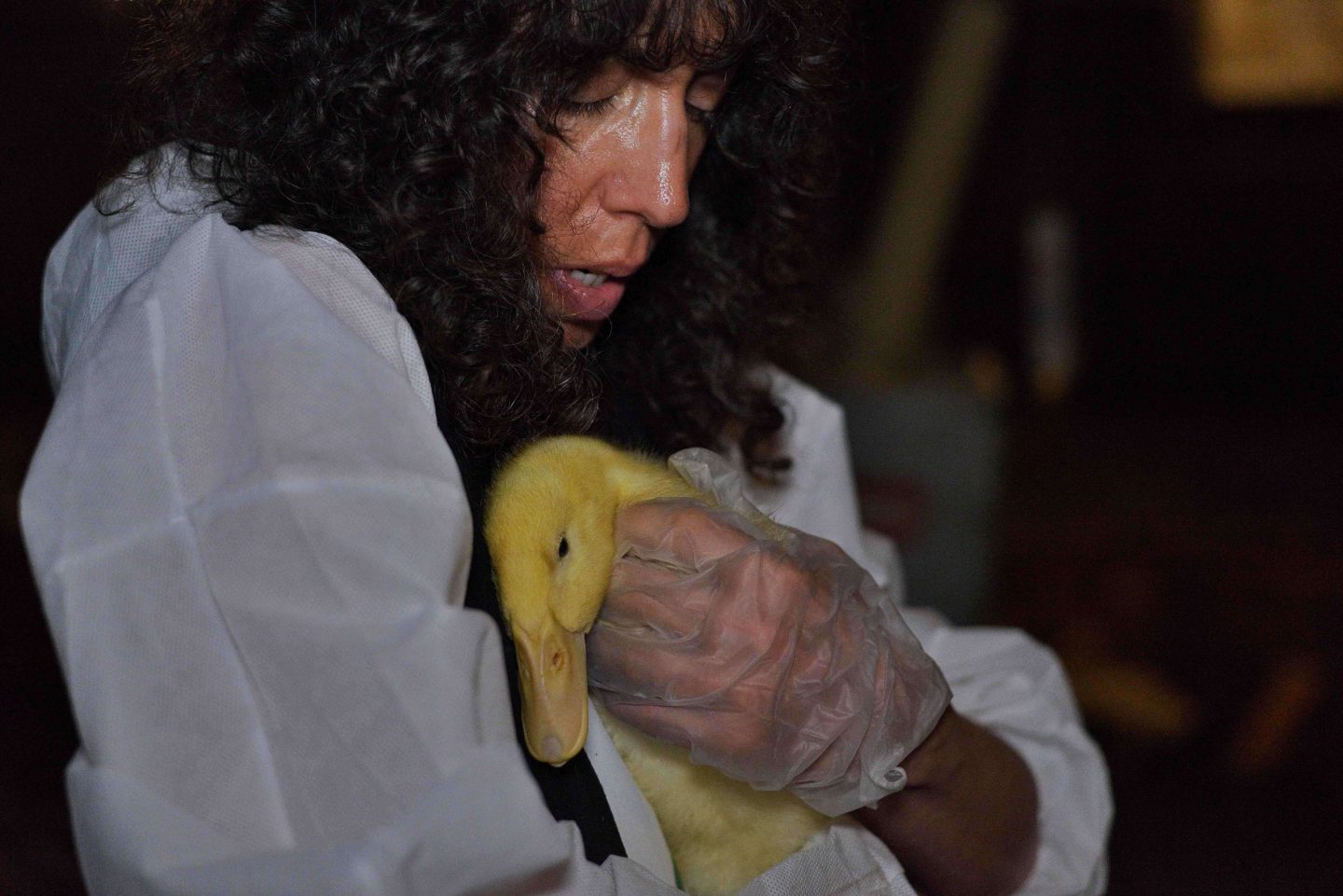 Friend in Sea: Port Jackson Sharks are Smarter Than You Think

On February 18th, Jenny McQueen and other Direct Action Everywhere activists conducted a rescue operation at King Cole Ducks in Stouffville, Ontario. The action was part of ongoing efforts by Ontario animal rights activists to protest Bill 156, also known as the Security from Trespass and Protecting Food Safety Act. If passed, Bill 156 would increase the fines that animal rights activists face for protesting in agricultural zones. Critics of the proposed legislation have called this Ontario’s attempt to pass an “ag-gag law”—a law with the sole purpose of disrupting the work of activists and whistleblowers exposing deplorable conditions in animal agriculture.

McQueen has been an animal rights activist for over 20 years; her activism started in England, where she first learned about the miserable conditions in which farm animals live. McQueen identifies as an abolitionist, meaning that she favors the complete abolishment of animal agriculture. McQueen is also active with Nation Rising and The Animal Save Movement and founded the Canadian anti-fur campaign #ZipOffTheCruelty.

Sentient Media Writing Fellow Jesse Harris recently spoke with McQueen about her experiences. The following is a lightly edited version of the conversation.

Jesse Harris: Would you tell me about the duck rescue operation?

Jenny McQueen: Absolutely. At any location of animal agriculture, we know that we’ll go inside and find disgusting conditions. This particular place was investigated for a few months beforehand. We knew that we wanted to do a covert rescue, but we also wanted to try to negotiate for lives to be saved. A team of 15 activists went inside and locked themselves down within the shed that had the baby ducks. When we say babies, they are about 10 inches long. They have cute little wings that are not yet formed. And before the workers and police were upon us, we actually rescued 26 ducklings.

JH: What does your team assess before you carry out an operation?

JM: We could target any [factory farm]. Perhaps a whistleblower working in the industry tells us about what’s happening and asks us to come. Videos and photographs were obtained from inside this location. Again, this applies to all locations and all over the industry. The farms will tell you [misleading information] on their websites and show videos with families holding clean individuals. They will say, “Oh, we put bedding down for these individuals. They have enrichments. Welfare is our highest concern.” And every single time that we’ve gone in, we find that there are no enrichments. Animals are lying in their own feces [with] no bedding—that’s too much for the industry.

And yet, at the same time, we’re told by the politicians that farmers love their animals. There’s a huge disconnect between what industry tells us, what the public thinks, and what the politicians are being told. It’s all about going inside and exposing these places.

JH: Walk me through how an operation like this works. What happens when your team arrives on the farm?

JM: First, we find a way inside, without breaking anything. We don’t break down doors. We don’t break down windows. We are peaceful and practice nonviolence. We go inside, and then if the decision has been made that it’s a lockdown, we quickly lock ourselves down in case workers come upon us. We have people to liaise with the police and with any workers who come upon us. We also take in carriers, so we have an open rescue opportunity as well. We have walkie-talkies with us. We have biosecurity gear, which is one of the most important elements. We have received advice on using good foot coverings. We have thick masks to cover our faces in case any of us struggle with the air, which is generally full of ammonia. And we have gloves on, as always. This is a very tight team of people that is willing to risk their personal safety.

JH: It sounds very organized. It seems that everybody has a plan to make sure that the action is as smooth and successful as possible.

JM: Absolutely. We have training beforehand, and we advise anyone on our team about the risks inherent to this kind of action. And we make sure that we don’t have anyone whose citizenship is in doubt. We are very careful with the people who we bring in. We know them. We train everyone in nonviolence and biosecurity and we provide all the supplies.

JH: What is it like to enter the duck shed? What the pictures and videos show is almost too foreign to imagine.

JM: Let’s be clear—I was not on the team that went inside. I have conditions on my prior arrest specifying that I cannot go inside. What I can explain to you is that people who have not done this before are horrified by what they see. All of your senses are assaulted. My experience is with entering two different pig breeding operations. You can use your imagination from the videos and pictures, but it’s just not the same as going inside these places. You hear all the machinery going; you hear the screams of the animals.

It’s fascinating to me that our team saw the ducks struggling on the ground, trapped in the wire mesh, their backs getting covered in the slippery feces—and yet, the looks on the ducks’ faces is one of contentment. And this is where the problem lies. Animals who are being abused, such as these ducks, have happy looks on their faces. The industry can take pictures of them, and the public is not hearing the machinery or smelling the ammonia. There are no windows in these places. The air hurts your lungs. You’re coughing. It’s a nightmare. It’s like going inside hell, it really is.

JH: What happens next? Your team is in the pen; what is the order of operations of what takes place from that point?

JM: We went inside. The operation was lockdown, rescue, filming, getting more adult [ducks], then negotiating with the police and the workers, and asking for the media to come inside. Sometimes, situations will change. We arrived and found that a worker was on-site in one of the other sheds. We decided to do a major rescue of the babies, so we managed to get 26 of them, and by then, we knew that the police were there. Twelve police cars came, but they didn’t seem to want to come to speak to us inside. A decision was made at the time to end the lockdown and exit without walking in front of the police. We had an alternate exit that we used.

JH: Did any of the members of your team have direct contact with the police?

JM: I phoned the police. A few of us made face-to-face contact. We made three phone calls to the police line, to the local and regional police, asking them to come and protect us in case we were met with violence. We’re very keen on protection. We’re very keen on the police coming and being that intermediary between us and workers who might lose control of their emotions.

I have a friend who was hurt in a direct action in France. I’ve been hurt in a dog sledding operation. I’ve had a chain tightened around my neck until I almost lost consciousness. So we’re very keen on having police involvement whenever we can after we are safely inside.

JH: How are the ducks that you rescued doing?

JM: The ducks are doing amazing. They really are. They are in safe homes. We took them somewhere so we could assess them. They’ve all had veterinarian checks. We thought that the vet might have to euthanize a few because of injuries, like a deep injury on the back. Some ducks had splayed legs that couldn’t walk properly or misformed wings. They are receiving medicine from the vet to help them. They’re receiving proper nutrition now.

We have a video, where we set a little container of water in front of them so that they could drink. That was extremely heartwarming.

JH: Members of your team who entered the barn were wearing sophisticated biosecurity clothing. Would you explain why these clothes are worn during operations?

JM: We’re concerned about animal safety. We don’t want to be taking anything from the outside world inside a shed that would harm the animals. The crazy thing is that all of these animals will die at slaughterhouses anyway. We realize this.

JH: Are you aware of any disease outbreaks as a result of actions by activists?

JM: No, I’m not. Civil cases by industry try to suggest that animals are harmed by these actions. Look at Pig Trial One, where Anita Krajnc—the founder of The Save Movement—gave water to thirsty pigs in a truck. Prosecutors tried to say that she was perhaps giving the pigs a noxious substance and that she was trying to poison the pigs. That claim was disproved in court.

JH: One of the purposes of this operation was to protest Ontario’s Bill 156. Why are you protesting the bill?

JM: The bill … targets people like myself who [are] willing to trespass and commit civil disobedience. One of the most damaging elements of the bill is that it criminalizes people who are working undercover [in factory farms] or who decide to report to journalists about what they’re finding. [The proposed legislation] is more serious than any other bill that has ever been proposed in Canada. 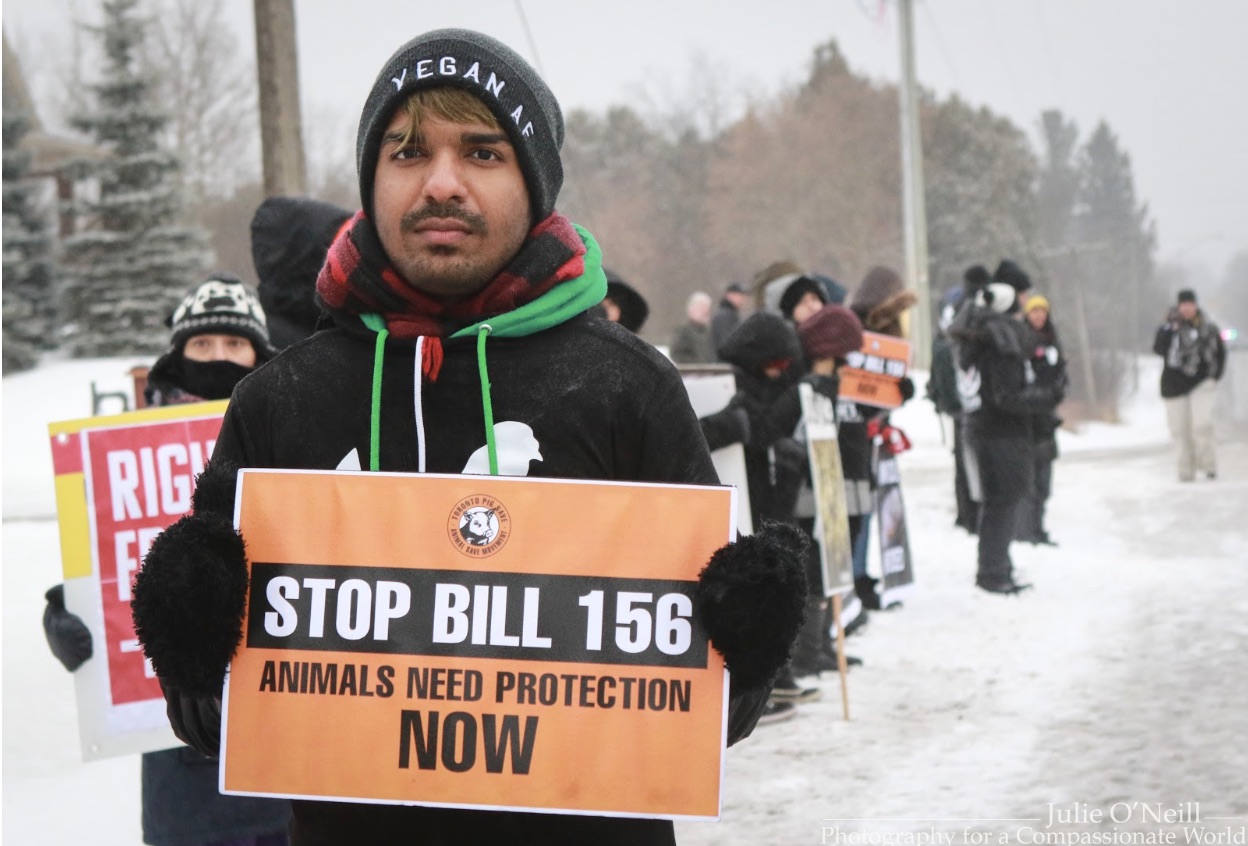 JH: Tell me more about the organizations with which you’re active. How can others get involved to oppose Bill 156?

JM: Regarding Bill 156, there are petitions online that people can sign. Direct Action Everywhere has chapters in many cities. Rose’s Law is a campaign that advocates for the five rights that all animals need to receive consideration at all levels of government. There is also The Save Movement, which is also branching out into different aspects [of animal agriculture’s impact] such as climate. Nation Rising is an amazing new organization helping to transition industry and government away from subsidizing animal agriculture.

My advice is to find out about farm animal sanctuaries in your own area and visit. Spend some quality time. You will see that pigs, cows, and chickens have personalities like dogs and cats.

JM: I would like to thank anyone who works to [advance] any social justice movement. Animal rights is a social justice movement and … anyone can get involved. You don’t need to take the radical action that I do. You don’t need to get arrested somewhere. You can get a Twitter account and tweet at people who still think that it’s okay to eat animals. You can share vegan eating resources such as Challenge22. You can speak to friends and family; you can [accomplish] animal activism from home.

JH: Thank you, Jenny; it’s been lovely speaking with you.

Learn more about Bill 156, and sign a petition to oppose the bill.