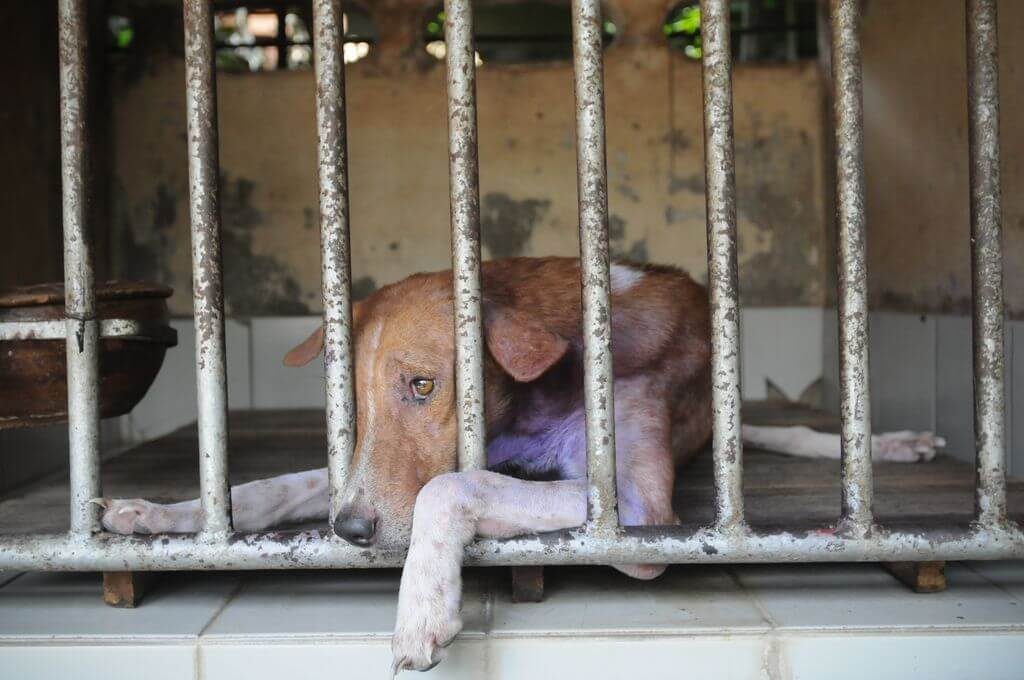 Protests erupted in Brazil after a dog was killed inside a supermarket. The image of a stray dog side-by-side with the trail of blood left in the aisles of the Carrefour in Osasco, Brazil surfaced last week after a security guard savagely beat the animal to death. Both the dead dog and security guard have been removed from the premises, out of sight and out of mind like the rest of the animals suffering to stock Carrefour’s shelves.

One report claims the security guard killed the dog by trampling, grossly inaccurate by first glance at the photo evidence. It shows blood splatter four feet wide. Paw marks can be seen in large puddles of blood, marked with a Caution: Wet Floor sign, as if the dog walked backward, trying to face the attacker. Eyewitnesses claim security beat the dog with a stick after offering it cheese filled with rat poison. Local authorities opened an investigation into the cause of death on Monday.

According to reports on Facebook, management told Carrefour security to “cleanse” the store before the arrival of some higher-ups at the company. It’s likely the dog, who grew comfortable in the store after employees set out food and water, met his fate from someone he trusted.

According to Article 32 of Brazil’s Environmental Crimes Law, it is illegal to abuse, injure, or maim livestock, wild, native, or exotic animals. Offenders can face up to a year in prison. The dead dog will be considered a wild animal by law, living on the streets of Osasco before taking refuge in the Carrefour.

But wild animals represent a very small portion of the animals covered under Article 32. Brazil produces more than 250 million livestock animals every year, and every single one of them suffers at the hands of farmers. Then they are killed for food and sold at supermarkets like Carrefour. 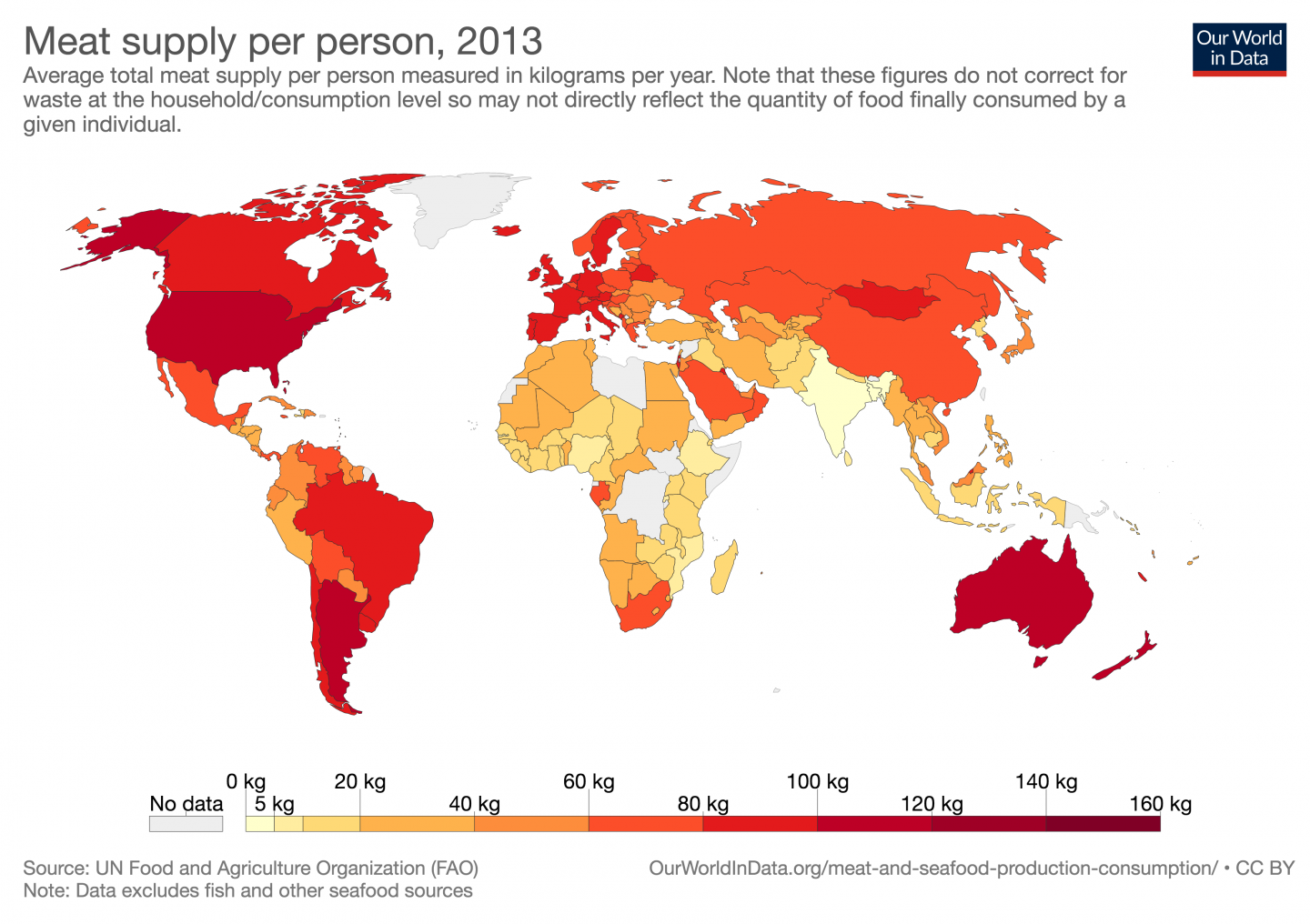 Note: That holds true for 105 million households with one person. Frankly, 7.9 billion is an extraordinarily conservative estimate. For one or more person households, Carrefour is responsible for distributing a sizable chunk of more than 16 billion pounds of slaughtered animal meat every year.

In 2012, Carrefour pledged to end the sale of dog meat. But four short years later, investigators from Animals Asia found dog meat on the shelves at a store in Xuzhou, China. Selling dog meat is not illegal in China. Don’t let that fool you. Dog meat products like the Fankuai turtle-juiced dog meat found at two Carrefour stores in 2016 is a threat to animal welfare—and the safety of Carrefour consumers.

The list price of Fankuai turtle-juiced dog meat is approximately $20. The main ingredient is dog meat, advertised by Carrefour as a “Local Specialty.”

Since the Animals Asia investigation, Carrefour removed the specific dog meat products from their shelves but made no attempt to ban dog meat sales indefinitely. Dog meat was back on sale at Carrefour as recently as May 2017.

Obviously, dog meat is a very small portion of the meat sold by Carrefour. It does, however, represent some of the most inhumane.

Dog meat is not traceable. Many dogs are pets or strays, making it impossible for food processors and sellers to guarantee that the meat is safe to eat. The dog meat trade is disturbingly characterized by the use of cyanide-dipped arrows to kill dogs. This barbaric practice allows trace amounts of cyanamide to enter the food chain, according to Jill Robinson, founder of Animals Asia.

Carrefour’s savage treatment of a stray dog last week in Brazil and history of dog meat sales in China is indicative of a supermarket chain completely inept at its animal welfare policy. Man’s best friend is not safe inside Carrefour stores.

Carrefour makes it clear that they support animal welfare—in text, that is. They promise animal protection progress plans—“from birth right through to slaughterhouse”—none of which have surfaced yet. Nor will these plans in the least bit protect animals, but that goes without saying. Millions of animals are suffering to put meat on the shelves at Carrefour. There, I said it.

It’s moronic to try to protect animals from suffering if a. animals are raised for slaughter and sold in your store and b. if even stray animals are poisoned and beaten to death by store employees.

Apparently, constructive dialogue means lying to consumers about ending the sale of dog meat, the product with the least positive approach to animal welfare. It’s also completely unrealistic to help train everyone in the production line. That’s like the Oprah promising every Carrefour consumer a car. Carrefour does not have enough resources to retrain the third-party producers stocking its shelves according to its standards. Neither party is ready to do so, anyway.

Out of sight, out of mind

Animal suffering bloodies the company’s reputation, whether it happens in stores or in slaughterhouses. But sadly, that won’t phase Carrefour executives. One dead dog is nothing compared to sales in the world’s fifth most meat-hungry country.

Out of sight, out of mind. The unspoken narrative of the industrial food system keeps millions of livestock animals hidden from you and me. Animal suffering on this scale should tell a different story. But corporate interests shut investigators out of farms. They push widespread, systemic problems with animal welfare further down the production line, waiting for someone else to tell them their methods are unfit. The consequence is exactly what’s taking place inside Carrefour supermarkets around the world.

The industrial food system feeds us more than food. It feeds us lies. Carrefour’s approach to animal welfare is a perfect example. Everything is true for Carrefour, and nothing is true for animals. Like they say, out of sight, out of mind.

The hand that feeds is the same hand that closes the door on animal suffering. Millions of animals suffering to stock supermarket shelves might be out of sight, but only you have to power to put them out of mind. The fight for animals has to start here, where inaction ends. Where it becomes action. Where animal suffering can be seen in the light of day, like the stray dog.