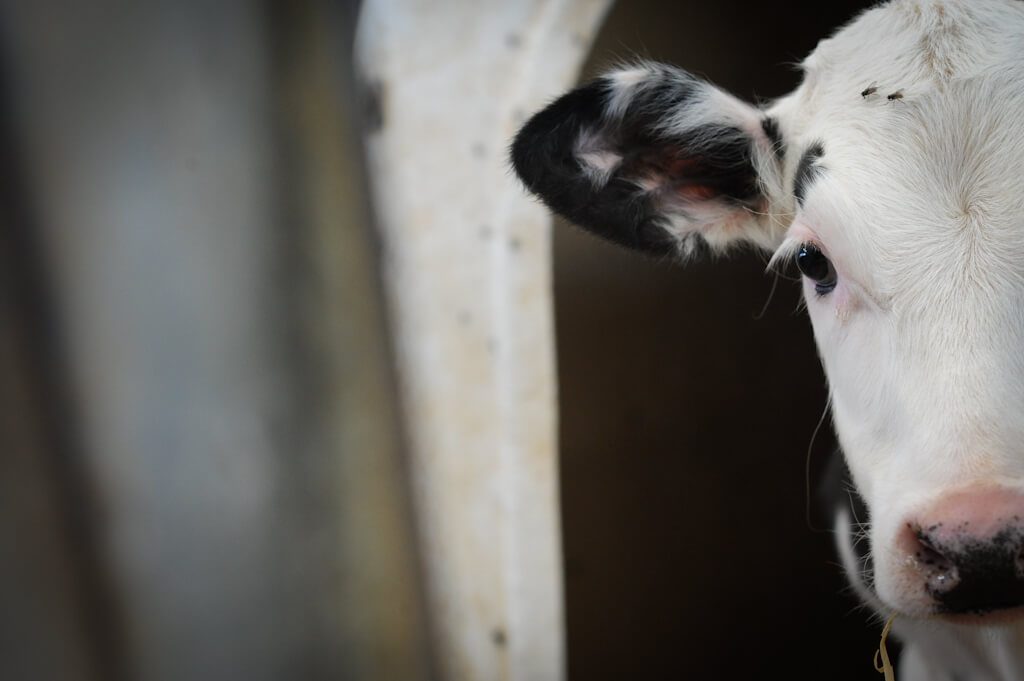 A Danish dairy farm is raising questions after they refused a big chunk of change to keep dairy industry doors closed to cameras. To give you an idea of what it might have looked like inside—and the extent of the problem—we compiled footage from dairy cow cruelty investigations around the world.

According to Faunalytic’s Animal Tracker, an annual survey of attitudes toward animals in the United States, only 8% of adults wanted fewer animal protections in 2018. More than two-thirds of respondents felt favorable about the direction of the animal rights movement. Only one-third thought that laws protecting animals raised for food were sufficient. Then why do we keep seeing dairy cows poked and prodded, burned, beaten with meat pipes, killed, and piled in a ditch?

Since 2008, nearly half (42-48%) of survey respondents consistently called the welfare of animals raised for food very important. Over the past 10 years, another 30% found the cause “somewhat important,” compared to about 12% who said farm animal welfare was not very important and 4% that said it was not important at all. The numbers seem too good to be true, and maybe they are.

The overwhelming majority of Americans care about animals, but there’s nothing in there that says that these same respondents are changing the animals they consume—or if they’re ready to.

In 2016, half of Americans said they knew little to nothing about the lives of the animals they called food. Only 8% said they were very knowledgeable about the welfare of dairy cows, cattle, broiler chickens, and other farm animals.

Consumers rarely, if ever, get to see the cow that produced the milk they drink. For big dairy companies, the problem starts with the financial incentive to hide the suffering behind a human-animal relationship that exists solely to turn a profit. Which begs the question: Do we need to see something to feel something about the milk we drink? Let’s find out. Here’s a shocking look at the dairy industry’s cruel mistreatment of its cows.

Inside the dairy farm beating and burning its cows

Struggling to walk, dairy farm workers wielding makeshift spears prod the cow in her udders as she is pushed out towards her death. Workers wrap a chain around the cow’s neck and drag it by the head. Illegally euthanized cows fall into dumpsters before the fatal drug can take hold.

As a result of the investigation, the Florida country charged three McArthur Farm workers with felony and misdemeanor animal cruelty charges. The undercover video from Animal Recovery Mission shows workers at the dairy farm, a Dean Foods supplier, sanitizing cows’ udders with a blowtorch. As one investigator put it, the cows are very literally being burned alive.

Note: McArthur Farms is not the only one beating and burning its cows. It’s not even the only one animal welfare investigators caught on tape. After the video made national headlines, supermarket franchise Publix vowed to end their relationship with McArthur Farms immediately.

One worker stands on—not over—a half-dead calf. The footage, taken by Animal Equality, shows animals bound in chains. Workers shove feeding tubes down the throats of distressed calves. You can hear them calling for their mothers. Separated from their children, mother cows struggle to respond. They stand in a stall without enough room to turn around. There are no windows and no light beyond that of the camera.

Animal Equality filmed using hidden cameras strategically placed around Coombe Farm in Great Britain earlier this year. Activists witnessed force-feeding, banned by organic certification body Soil Association and many other farm animal monitoring groups. The video shows newborn calves dragged away from their mothers by their hind legs and put in a separating pen without access to water for more than 24 hours.

That much is banned by the Soil Association. What’s not banned, but equally infuriating is the removal of these calves from their mothers less than two days after giving birth. Farmers steal the cow’s milk, meant for her baby cow, and sell it to consumers. Humans are the only species that forcibly impregnates another in the name of profits and protein.

“[The farm] failed to meet even the basic minimum legal requirements for looking after calves in the dairy industry,” the group told the Independent.

Cows hit so hard they can barely walk

“You’ve got to train your cows,” the dairy farmer told farm animal advocacy group Farmwatch, who captured undercover footage of the same man beating his cows with a steel pipe. He was unaware of this footage at the time of the interview. “You can’t let your cows rule you.”

The farmer’s savage beatings put so-called problem animals at the back of the herd with legs so swollen they could barely walk. The video shows his sick solution. Beat slow walkers more, not less. One worker reported that farmhands frequently hit cows in the head and threw the animals’ feces in their face.

“I was stunned and sickened by what I saw,” Farmwatch investigator John Darroch told Newsroom. “The level of anger towards the cows was quite disturbing to see.”

When Newsroom called the farm’s owner to follow up on the allegations against his employee, he refused to comment.

Do we need to see something to feel something?

In October, the New York Times published a story on James Mumbulo, a down and out dairy farmer trying to rebuild his herd in upstate New York. After discovering 27 dead cows piled in a pit of manure and left to rot, police arrested Mumbulo. They charged him with 27 counts of overdriving, torturing, and injuring animals.

Authorities released no photos or videos following his arrest. Allegedly, the plan was to clean out the barn and burn the cows. In text, this paints a much nicer, even forgivable picture of the horrific scene at Mumbulo’s farm. But this level of cruelty towards animals is not forgivable. Mumbulo left the cows in the barn without food or water. Police found their bodies in an advanced stage of decomposition.

At the time, New York state’s dairy industry was struggling, and Mumbulo’s story was largely forgotten. But there’s no doubting that if we could see what happened, there would be no way to forget the atrocious fate 27 animals met there. Sometimes, we do need to see something to feel something.