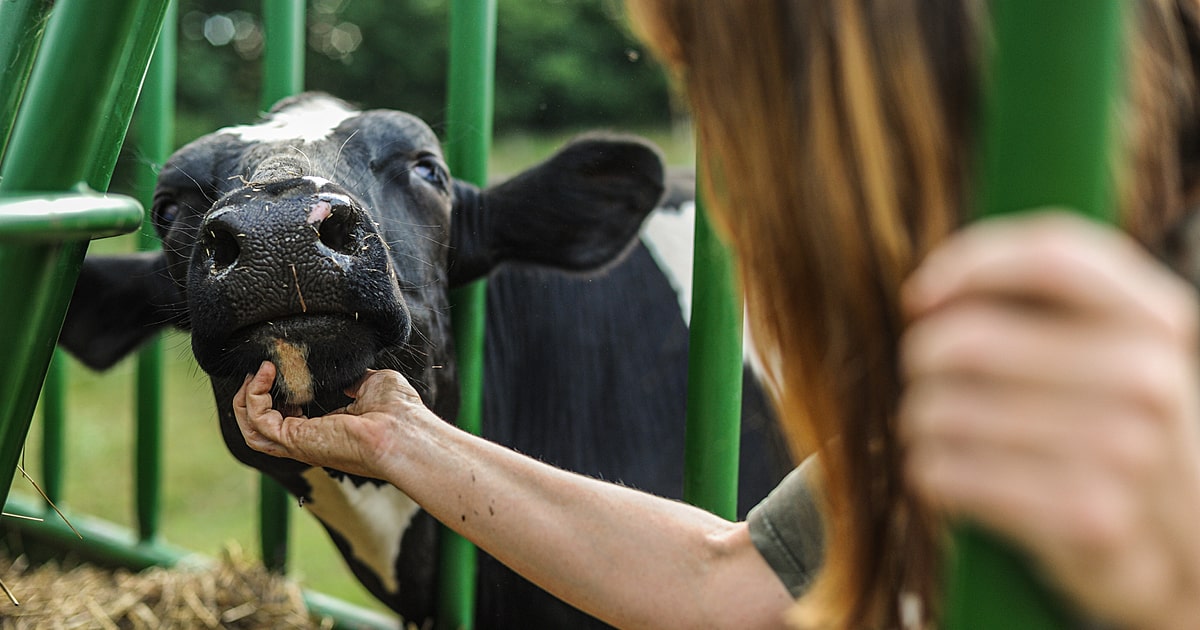 In Stardew Valley, a video game that simulates a bucolic farming life, the initial device that players must use to milk a cow or goat is a metal bucket. Players can quickly upgrade to an Auto-Grabber, an automated device that delivers ready-to-drink milk in a brown cylinder without the need for any farm work.

This depiction of milking is a gross simplification of dairy farming, yet the fantasy is in keeping with how little most consumers see of how cheese, milk, and butter are made. Our images of farming don’t include the business dealings, the machines, the plight of the cows, the impact on communities, or the pay and conditions of the workers required to produce the milk.

What Is Dairy Farming?

Dairy farming is the practice of raising mother animals such as cows, goats, buffalo, donkeys, and other livestock and using their milk to feed humans. Dairy products include cheese, butter, yogurt, ice cream, and milk. Byproducts of the dairy farming industry are also used for feeding baby cows and even for nonfood purposes like paint, high-quality color print paper, and, historically, airplane coating.

Is Dairy Farming Intensive or Extensive?

Dairy farming is largely and increasingly intensive and mechanized, or industrial. Most cows on dairy farms in the United States are kept confined to a stall where they are delivered food, rather than being allowed to graze for their own food on a pasture. They are artificially inseminated and produce enormous, unnatural quantities of milk.

How Does Dairy Farming Work?

Like many sectors of the U.S. economy undergoing consolidation into a small number of big businesses, the dairy farming scene seems to be an example of unenforced antitrust laws leading to the impoverishment of rural counties. Yet as the number of dairy farms halved from 2002 to 2019, the amount of milk produced grew.

But how does the actual milking happen?

Twice a day, about every 12 hours, two people embark on a three-hour session of milking 150 cows at a Michigan farm. Below are some technical aspects of how milk is extracted from cows, taken from dairy industry promotional videos and presentations.

A milking pipeline uses a vacuum pump to help move milk from the cow to the tank where the milk is stored. A farmworker attaches a milking device, shaped like a hand-held microphone, to each of the cow’s teats.

From the cow, the milk runs through the pipeline using a combination of vacuum suction and gravity, towards a bulk cooling tank. Each pipe has ports that allow for a milking machine to be plugged in at different points, and they are often installed permanently near the ceilings of the milking parlor.

The cows are brought to the holding area and await entry to the milking parlor where they will be milked, a few cows at a time. The farmworker removes manure and bedding from each teat, then dips each teat in a container of iodine solution, to disinfect them.

The worker then pulls on the teat to visually inspect the stream of milk. Pulling on the teat mimics the way a baby cow would suckle at it, which prompts the mother cow to begin releasing milk. Before attaching the milking device, or milker, the worker wipes the teats off with a towel that is reserved for just that cow.

The milking parlor is cleaned twice a day after each milking session. Soap and water run through the milking pipelines, milkers, and other equipment. The floors are also washed.

To get the milk from the cow, a farmworker puts a milker on each of the cow’s four teats. The milkers attach like magnets to the teat, the result of suction from a vacuum pump that simulates how a hand would squeeze the teat, or how a baby cow would suckle. Each milker is lined with rubber and is attached to the milking machine, which is also called a pulsator. A vacuum pump from the machine makes the rubber squeeze on the teat, rhythmically pulling on two diagonally opposite teats at a time.

The milk from the cow passes a sensor, which can tell when no more milk is flowing through it. At that point, the milkers automatically fall off of the cow. The milkers are suspended from a chain that keeps them from hitting the ground.

Less common, but apparently growing in number around the world, are farms that use robot milkers. Robot milkers use lasers to identify the teats of each cow that enters a stall where the machine is located. The cow reportedly seeks out the milking machine to relieve themselves of the pressure in their udders. The machine, in turn, tracks each cow using the RFID tag embedded in the cow’s ear.

Cows produce a lot of manure. When hundreds or thousands of them live in cramped spaces, the resulting stench, water, and air pollution, and animal health problems are hard to ignore. About 8 out of every 10 dairy cows in the U.S. (78 percent) are living in medium and large concentrated animal feeding operations—that is, 200 or more cows per operation. Only 4 percent of dairy cows in the U.S. live on farms with fewer than 50 cows.

Each cow lived as cramped in her stall as a big foot in a small shoe. She spent her hours engaging in one of four activities. She would eat, her mouth rotating in a slow, circular motion as she chewed through the pile of corn and hay dumped daily before her. She would drink, from a soup-sized blue bowl that, when touched with her mouth, filled automatically with water from a labyrinth of overhead pipes. She would nuzzle—passing her head through from underneath the bar separating her from her neighbor—and she would lick her neighbor or else rest her head on her neighbor’s neck. Finally, she would groom-—rather, try to groom.

Though every cow’s hindquarters were caked with a crusty layer of excrement, she was helpless to clean them. Her neck chain held her in place.”

Faruqi describes the “shit trainer,” a metal rod that dangled above each cow in a tie stall. The rod would electrically shock the cow to punish her into not pooping anywhere other than a gutter at the back of her stall.

Because the cows that Faruqi visited and wrote about in her book “Project Animal Farm” lived on an organic dairy farm, they were required to have outdoor access for 120 days per year, or slightly less than one-third of their lives. Nonorganic dairy farms would not have been required to allow access to the outdoors at all.

In fact, 20 percent of U.S. dairy farms kept their lactating cows in “freestalls with no outside access,” according to a 2014 USDA survey of major dairy farming states. This jumps to more than half of all cows (52 percent) living on large dairy farms. The concrete floors on which indoor cows must stand lead to foot damage, and are linked to increased pain and difficulty walking.

Dairy farms are in the business of raising mother cows and their babies. In order for the mothers to lactate, and for the farms to extract their milk, the mothers are impregnated. Most dairy cows become pregnant through a manual and uncomfortable procedure called artificial insemination. The result of selective breeding through artificial insemination is that cows’ udders hold so much extra milk that their backs and legs ache.

Within hours of being born, baby cows, known as calves, are taken from their mothers. The milk that would have gone to feed the baby is diverted to the milking parlor so that humans can use the milk instead. Ideally, for the health of both the baby cow and the mother, a calf would suckle for a few months.

Conventional U.S. dairy farms can house calves as they wish. As a result, about 75 percent of baby cows less than six months old (pre-weaned heifer calves) are housed in individual hutches or tie stalls, even though European Union welfare policymakers limited the use of such confinement to calves over two months old in 2007. This year, the European Union agreed to make the rules on individual confinement of farmed animals and other practices even stricter by 2027.

The rationale for housing cute baby cows—who are often compared to playful puppies—in groups was summarized in the European Union 2008 Calf Directive: “It is recognised scientifically that calves should benefit from an environment corresponding to their needs as a herd-living species.”

Baby boy cows have a different fate than their sisters: they are either killed soon after birth or raised on veal farms to be sold for their meat. Like their brothers, cows that have stopped lactating are also slaughtered.

Below are some facts to help give a sense of the size and scale of dairy farming in the U.S.

How Profitable Is Dairy Farming?

The average person looking to make a living in dairy farming isn’t likely to make much profit or have a lot of stability: small dairy farmers are going out of business. News reports regularly indicate that it costs more to produce milk than farmers can sell it for. Expenses include veterinarian bills, feed for the cows, and gasoline.

The dairy farming industry ultimately rewards big processors rather than farmers. Market consolidation shuttered 95 percent of dairy farms between 1970 and 2019, according to The Transfarmation Project.

In addition to the economic instability of being a dairy farmer in an industry with too few buyers of milk, there are other punishing aspects of working on dairy farms.

How Many Dairy Farms Are There in the U.S.?

The ASL sign for milk is the act of curling one’s fingers around an imaginary teat or hand exerciser. Prior to the late 19th century, most milking was done by hand in this way, and it was associated with the labor of women known as dairymaids.

Enslaved people at Thomas Jefferson’s Monticello, such as dairymaid and cook Ursula Granger, who arrived on the plantation in 1773 and died in 1800, would have milked cows, cooled the milk, and made butter with it. Enslaved people probably also made Jefferson’s favorite vanilla ice cream, among other foods.

All the milk would have been squeezed from the udder, two or three times per day, similarly to today’s machine milking. Herd sizes were generally between 15 and 40 per farm.

In the 19th century, the U.S. doubled in size with Jefferson’s Louisiana Purchase and the forced removal of Indigenous people from their land, and the number of dairy cows living in the U.S. tripled from 6.5 million in 1850 to 17.1 million in 1900.

In the latter half of the century, milking machines began to be developed, as did bottling milk and the process of pasteurization, or heating milk to prevent the spread of milk-borne diseases.

The Future of Dairy Farming

In dairy farming, cows are often “milk machines” who can barely turn their heads, much less exercise and socialize with other cows. the dairy apparatus on U.S. farms includes the tethering of cows’ necks, electric trainers, manure gutters, and calves confined in crates. Yet cows still dream and enjoy being outdoors in good weather, mourn when they are separated from their babies, and, just as in Stardew Valley, they can be loved by humans.