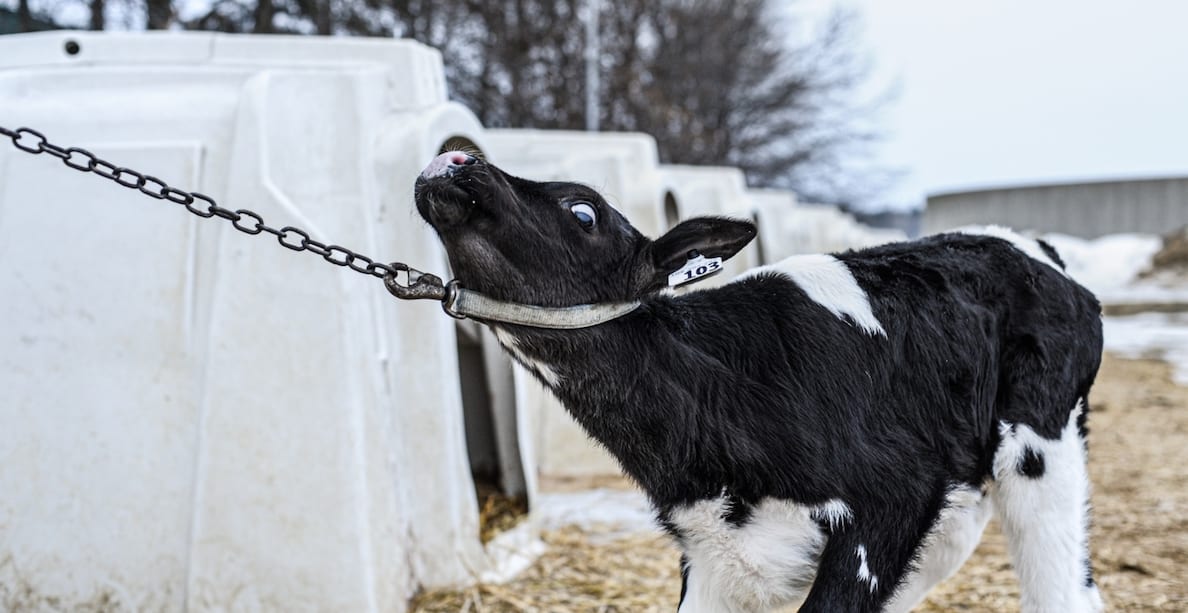 Seaspiracy Co-Star Jonathan Balcombe Gives His Take on the Film

Veal is meat from calves, normally between six and eight months old, but sometimes far younger. Veal calves are typically male Holstein-Friesians, who cannot produce milk, and are therefore sold by the dairy industry to be slaughtered for profit. Veal is a popular cut of meat in Europe, and the EU produces about 82 percent of global veal.

The meat is rarely consumed in the U.K. and U.S., where veal-eating rates have continued to decline since the 1960s. It once had a reputation for being exceptionally cruel, an image farmers in the U.K. and the U.S. have struggled to redeem. However, despite reforms to certain national veal industries, the realities of veal production remain cruel. Indeed, due to its intimate relationship with dairy, veal poses a moral hazard that goes beyond the purchasing of the meat.

What Is Veal Made From?

Bob veal is meat from calves killed at anything from a couple of hours to a month old, but who are typically under two weeks of age. As veal crates have been outlawed in several U.S. states and Europe, demand for “humane” bob veal slaughtered at young ages has risen, because the undeveloped muscles of newborn calves make their meat tenderer. Bob veal accounts for about 15 percent of the U.S. veal market.

Slink veal is the youngest possible veal, harvested from stillborn or unborn calves. It is normally collected from cows that are pregnant when slaughtered. Slink veal is illegal to consume in the U.S. and Canada.

Why Is Veal Cruel?

A large body of research has established that mothers and calves gain a strong emotional bond immediately after birth. A mother cow will cry out for days after separation, hoping to receive a response from her calf, which has either been transported to another part of the farm, or abroad, or has already been slaughtered. They will exhibit negative reactions to ambiguous stimuli after violent and traumatic events. Indications of stress, like showing more whites in their eyes, will be present after such separations. In short, the animals suffer greatly from the practice of separation, the first major cruelty perpetrated in the manufacture of veal.

Calves separated from their mothers and the herd will exhibit abnormal behaviors This is in part due to their being raised in isolation, without gaining any benefits from socializing, and also because of the conditions, they are kept in. Cows raised in isolation, typical on those farms which still use veal crates, will exhibit a large range of abnormal behaviors including bar biting, tongue rolling, and excessive resting. These repetitive behaviors, called stereotypies, are indicators of mental anguish and poor welfare standards.

Veal calves tend to be fed a milk substitute that contains insufficient amounts of nutrients, and particularly lacks iron. This leads to abnormal gut development in the animals, as their insufficient diet causes them to have chronic diarrhea. The lack of iron also causes the calves to suffer from anemia, which gives the animals their prized white flesh whilst making the calves lethargic, weak and unwell. The veal industry purposefully breeds these animals to suffer perpetual illness and malnourishment, a practice which can only be called “cruel.”

Comprehensive scientific evidence shows that calves experience significant stress when handled and transported, particularly over long distances. Young calves are badly adapted to long journeys due to their underdeveloped immune and stress response systems. Long transport journeys for calves can result in anywhere between 1 and 23 percent mortality in a given group, from factors like diarrhea, exhaustion, and exposure to heat or cold.

Over 1 million veal calves are transported around Europe each year, and even a high-welfare country like the U.K. exports the vast majority of its veal calves on long overseas journeys. In one study of Swiss dairy and veal farmers, no bedding was provided for any of the calves transported over long distances, even though this was mandated by law.

The handling of calves before transport is one of the key factors underpinning how they fare on the subsequent trip. Calves are often handled very roughly and many cases of young calves being punched, kicked, and abused by farmworkers are on record. Whether young calves are destined to become veal, pet food, or kebab meat, their presence in a system that treats them as commodities who only possess value when the dead will always put them at risk of violence and unnecessary abuse.

Veal calves are given large quantities of drugs because they tend to live highly stressful lives, due to the way that their handling and rearing harshly impacts their underdeveloped bodies and psyches.

Veal calves, because of their stressed lives, are highly susceptible to microbial infection, like most animals raised in industrial farming. Their immune systems tend to be weakened due to their youth, their rough treatment and transportation, their living conditions, and their insufficiently nutritious diet.

Even in countries where veal crates are illegal, as the U.K. as of 1992 and the EU as of 2007, industrial systems of raising calves continue to exist. There are still cages used in U.K. farming, and although the guidance requires calves to be able to stretch and lie down, they are still confined to spaces not much bigger than their bodies. Additionally, in group or barn systems welfare can still be very poor: absence of bedding has been reported in Dutch farms, where the exposed slatted floors give calves lameness and other foot injuries. The EU space allowance is also 60 percent that of the U.K.

Veal crates remain legal in the U.S. although they are banned by certain states, and in the EU, the U.K., and Canada. The suffering that veal calves feel as a result of isolation is exacerbated by the intense boredom and restlessness they experience in their tiny 0.8 by 1.8-meter crates. The crates are used to induce wasting in the animal’s muscles, which it cannot use because of the lack of room. This creates the tender meat valued by consumers.

Are Hormones and Antibiotics Used in Veal Raising?

The stressful lives of veal calves lead to a greater susceptibility to infection and disease, and as a result, they tend to be treated extensively with antibiotics. They are treated with more antibiotics than pigs or poultry, which is a cause for concern due to the growing problem of antibiotic-resistant bacteria. As the veal sector is one of the biggest per-capita offenders, its contribution to this serious medical issue deserves careful evaluation.

How Much Veal Do People Consume?

Veal is not one of the most popular meats in the world. In the U.S. the average consumer eats 0.2 pounds of veal per capita, down from 0.7 pounds in 2000. The French market, on the other hand, is the largest in the world, accounting for 35 percent of European veal consumption, which in turn accounts for 82 percent of global veal consumption. The next big veal consuming countries are Italy and Germany. The Netherlands produces the largest amount of veal, accounting for 31 percent of global veal production. France is close behind at 30 percent, killing some 1,320,000 calves in 2016.

Veal has been marketed as a healthier and greener alternative to beef. However, whether it is healthier than beef is a different question to whether it is healthy overall. Veal contains roughly 103 milligrams of cholesterol per 100 grams, over a third of the daily limit. However, the very idea of daily cholesterol limits is out of fashion; current advice is to consume as little dietary cholesterol as possible. In a world where plant-based protein is abundant, there is no need to consume veal or other cruelly manufactured animal products.

Why Does Veal Taste Different From Beef?

The calf meat is softer and tenderer, due to its young age and, in the case of white veal, the calf’s nutritionally inadequate diet. It supposedly has a more delicate flavor, despite the distinct absence of delicacy in its manufacture.

Is There Such a Thing as Humane Veal?

There are extensive outdoor and indoor methods of producing veal that works on a much better welfare basis. These indoor options have bedding for the calves, access to the outdoors and ventilation, and more space per calf. The outdoor options are the best for calves, and the highest standard organic farms suckle calves on an older, retired dairy cow.

Suckler herds allow veal calves to stay with their mothers and be weaned off their milk before slaughter. As it avoids the pain of separation, and calves get the psychological and health benefits of staying with their mother, this can be a higher welfare option.

UK standards require calves to have bedding, and for younger calves to consume twice the fibrous food of continental calves. The minimum amount of iron in their diet is also supposed to be higher, and older calves should be provided with more room than is required in Europe.

How Is Veal Legal?

Veal is legal because there is still demand it. The shocking nature of its production has led to bans on the most egregious forms of veal rearing, like the use of veal crates and the procurement of slink veal. Yet veal remains legal because animals have no recognizable rights in countries across the globe. Ultimately, as long as consumers refuse to change their eating habits, the way that veal is made and indeed the treatment of any food animals will remain in the hands of an agricultural industry that seeks to maximize profit and creates massive suffering as a result.

What Can You Do to Help?

There is only one sure-fire way to make sure you do not contribute to the practice of veal raising and slaughter; to exclude veal and dairy from your diet. Since veal calves are largely provided by the dairy industry, as a byproduct of breeding milk cows, the two industries are inextricably linked. Supporting dairy means the support of the veal industry and the killing of thousands of animals.

Veal has tried to restore its reputation and rebrand itself as something free from the stain of cruelty that blemished its name for so long. Yet in the U.S. veal crates are still legal in numerous states, and in the EU and U.K., intensive veal farming still abounds. It is unclear if an industry that kills baby cows who do not want to die, sometimes before they have even suckled from their mother, can ever call itself humane. That remains the nature of the veal industry and it typifies the indifference of industrial agriculture toward animals at large.