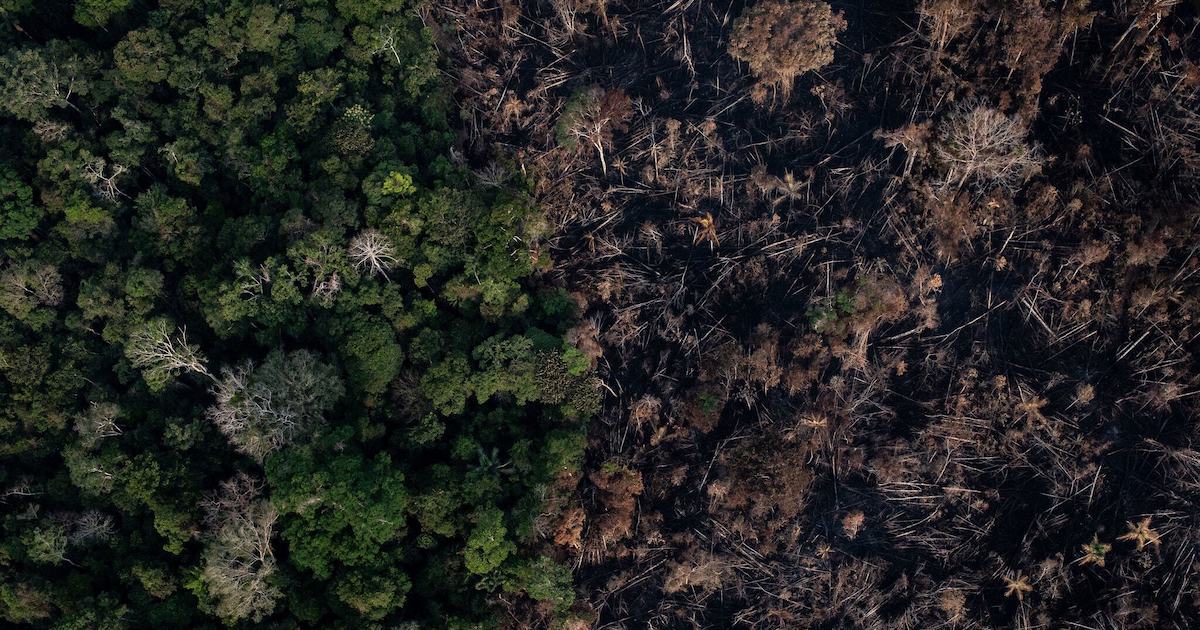 Deforestation — the act of clearing forest for animal agriculture, logging, mining, infrastructure or urban development — has caused the Amazon rainforest to now emit more carbon dioxide than it absorbs. Deforestation has destroyed thousands of species of wildlife and plants, put the lives of local communities at risk and wiped out one of nature’s most important tools in storing carbon and staving off the climate crisis.

Despite the potential consequences, deforestation of the Amazon is continuing at an alarming rate. The current rate of destruction is causing the local water cycle to approach a tipping point that would have profound impacts on the biome’s inhabitants.

What Is the Amazon Rainforest?

The Amazon is the world’s single largest rainforest. The vibrant and extensive ecosystem is home to millions of species of flora and fauna, as well as a large human population. It is one of the most biodiverse ecosystems on the planet.

Which Countries Does the Amazon Rainforest Span?

The Amazon rainforest spans parts of Venezuela, Guyana, Suriname, Brazil, Bolivia, Peru, Ecuador and Colombia. Brazil contains the largest portion — just over 1.5 million square miles of the Amazon — where the majority of deforestation took place in 2021.

How Big Is the Amazon Rainforest?

The world’s most well-known rainforest covers approximately 2.72 million square miles in total, equivalent to twice the size of India. The Amazon river flowing through it is 4,100 miles long.

How Much of the Amazon Rainforest Has Been Explored?

Much of the Amazon rainforest remains unexplored because of how hard it is to access. Yet the remoteness and lack of transport also help ensure that many areas of the Amazon are not as exploited as more accessible parts of the region. This allows native wildlife flora and fauna to flourish in the way they should and protects the Indigenous people living there. Researchers believe there are still several dozen tribes of Indigenous people in the Amazon who have never been in contact with the outside world.

Why Is the Amazon Rainforest Important?

Not only does the rainforest provide a habitat for thousands of species of wildlife and millions of plant species, it also plays an important role in counteracting global climate change. By current estimates, the Amazon holds around 123 billion tons of carbon, which would otherwise be released into the atmosphere in the form of carbon dioxide emissions.

Why Is the Amazon Rainforest in Danger?

In addition to sustaining the thousands of species that reside there, the Amazon rainforest is now also being used for intensive animal agriculture, crop production, mining and industrial development. By 2018 these activities, among others, had resulted in deforestation of 17 percent of the Amazon. A study released in 2020 showed that 8 percent of the rainforest had been destroyed in the previous 20 years alone. As destructive activities continue, the rainforest is also losing its resilience and approaching a point of devastation it may not be able to return from.

Causes of Deforestation in the Amazon

A substantial amount of the Amazon rainforest is now being used for commercial activities such as animal agriculture, mining and logging. As these enterprises grow, areas of the Amazon are being cleared at a dangerous rate.

To meet the global demand for meat, vast areas of land in the Amazon are being destroyed to make space for cattle ranching. This activity is the largest cause of deforestation in the Amazon, accounting for around 80 percent of the destruction, and also the release of 340 million tons of carbon per year. Cattle ranching is on the rise, with the heavily forested state of Acre experiencing an 8 percent increase in its bovine population in 2020.

Although generally thought of as less destructive, the cumulative effect of small-scale agriculture also brings serious consequences for the Amazon. Research published in Scientific Reports in 2018 found an increase in the number of smaller-scale agriculture operations being started across Amazonia from 2001 to 2014. It has been suggested that many of these smaller farms are the attempts of landowners to evade detection by deforestation monitoring systems.

Just like animal agriculture, crop production in the Amazon involves the clearing and burning of large areas of land. The crops grown on these areas of land include soy, sugar cane, palm oil, cotton and rice. Since soy is a key ingredient in animal feed, its demand is rising along with the global demand for meat.

In addition to the issues caused by the clearing of such vast areas of the rainforest, agricultural practices such as the use of pesticides and fertilizers have implications for the native wildlife, plant species and Indigenous people of the region.

Selective logging in the Amazon involves the cutting down of trees that are commercially valuable, often with little regard to any ecological impact and how long the forest would take to recover. Where logging is not carried out sustainably, habitats are lost and damage is caused that would take many years to repair.

The Amazon region is mined for gold, copper, iron, manganese and other materials. In order to mine these materials landowners clear vast areas of forest and dig mining pits. Gold mining has been on the rise in recent years and in one area of the Amazon, along the Guiana Shield, gold mining accounts for around 90 percent of deforestation. The process of mining gold has further ecological impacts as it involves the use of mercury, which can contaminate local water supplies.

Increasing deforestation rates impede the Amazon’s ability to store carbon and counter climate change. Our changing climate is also having an impact on deforestation. As the forest becomes drier and contains less moisture, it becomes more susceptible to wildfires.

The development of road networks has made parts of the rainforest accessible that were previously difficult to reach. The majority of deforestation hotspots in Brazil in 2021 were found along major road networks.

When decision-makers have a simplistic pro-development agenda they tend to have little regard for the devastating ecological and social impact of deforestation. Destructive activities have surged in the Amazon since 2019, when president Bolsonaro’s government in Brazil weakened the protections that were previously in place to protect the rainforest.

The Brazilian Institute of the Environment and Renewable Natural Resources (IBAMA) was set up to monitor activities related to the conservation of natural resources in Brazil. In 2019 and 2020, however, IBAMA acted on only 1.3 percent of the alerts for illegal deforestation activity in Brazil. Without effective law enforcement strategies there is little to prevent landowners from carrying out illegal deforestation. It has been estimated that 94 percent of deforestation in the Amazon and the Cerrado may involve illegal activity. If accurate, this would equate to 18 million hectares of habitat having been illegally destroyed.

Fires are often deliberately started in the Amazon to clear land for animal agriculture, crop production and other related activities. In addition to destroying thousands of hectares of the rainforest, these fires can easily escape control. Whilst the natural moisture of a rainforest should provide protection from the spread of fire, increasingly dry conditions can impede the rainforest’s ability to protect itself from fire. Wildfires clear further areas of land and increase susceptibility to further fires.

Effects of Deforestation in the Amazon

The impact of deforestation in the Amazon is felt by its native wildlife, flora and human population. Beyond the local impact, the rainforest is losing its ability to store carbon, which has serious global implications for the climate crisis.

Deforestation of the Amazon is also impacting the millions of people who live there. When their land is stolen for ranching or logging, or the areas they live in are destroyed by fire, the lives of the Indigenous people of the Amazon are put at risk. While there has been much debate over how far pre-Columbian societies altered the landscape of the Amazon, one study published in PNAS in 2021 suggests that native inhabitants of parts of northeastern Peru have lived there for thousands of years while having very little impact on its ecosystem. They now, however, face the consequences of the actions of others.

Through a process known as transpiration, the Amazon expels large amounts of water into the atmosphere. This water then falls as rain and is thought to provide around half of the region’s rainfall. But as the rainforest’s cover is reduced as trees are cleared, it holds and therefore releases less water.

With a reduction in the number of trees, the Amazon has less cover, contains and releases less moisture, and can no longer cool the local climate in the way it once did. Local temperatures are therefore rising.

When Did Deforestation Start in the Amazon?

Mass deforestation of the rainforest is thought to have begun in the 1960s when land owners began cutting down large numbers of trees in order to clear land for commercial activities.

How Much of the Amazon Rainforest Has Been Destroyed?

Specific measurements are difficult to gather because of cloud coverage affecting satellite images and differences in how research groups define ecosystems. It is thought though that since the 1970s more than one-sixth of the Amazon rainforest has been lost. Since 1988 an average of 10,000 acres of the Amazon has been destroyed every day, equating to an area the size of California being lost. In 2021 alone around 4.8 million acres of rainforest were lost.

How Much of the Amazon Rainforest Is Left?

A large amount of the rainforest has been lost over the last 50 years, and exactly what remains is difficult to measure precisely. Scientists warn that what remains must be protected by a drastic reduction in deforestation if we are to prevent it reaching a tipping point from which it cannot recover.

When Will the Amazon Rainforest Be Gone?

If deforestation continues at its current rate it’s thought that we could see the demise of the Amazon rainforest by 2064, particularly of southern and eastern areas. By this point periods of severe drought will be so close together that the rainforest will not be able to recover in between. The remaining dry and sparse areas of land will not be able to support the native wildlife, indigenous groups, and local communities relying on the water it supplies.

Facts About the Amazon Rainforest

How Can We Stop Deforestation in the Amazon?

As cattle ranching accounts for the majority of deforestation of the Amazon rainforest, reducing the global demand for meat products is one of the most effective ways to prevent deforestation. Increased legal protections are also needed, as well as strategies to enforce them.

To play your part in reducing the demand for meat products you can reduce or remove meat from your diet. Without the demand, landowners will not profit from clearing and destroying the rainforest in the way they currently do. You can also support organizations, either practically or financially, that are working to protect the wildlife of the rainforest, are working towards policy change, or are advocating for the Indigenous people of the region.