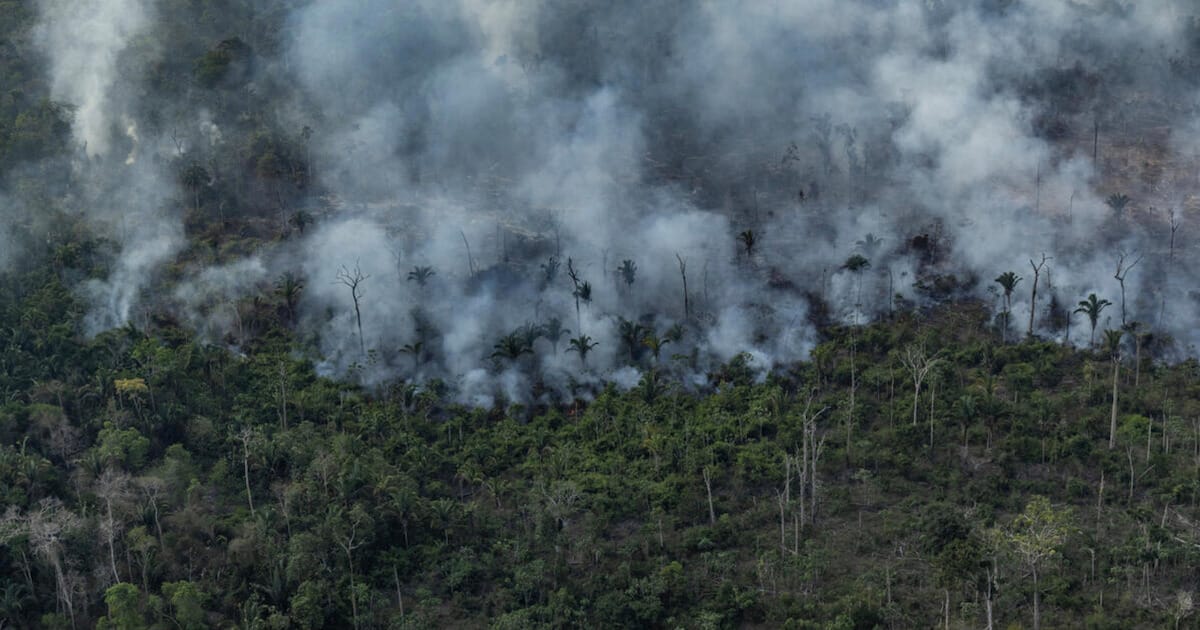 What This Guardian Article Got Wrong About Avian Flu

Fires burning in the Amazon and Cerrado to clear land for soybean production—the primary ingredient in animal feed—have reached an all-time high, according to official figures released by the Brazilian government last week.

These fires, which have been growing in size over the past 10 years, have been difficult for experts to track and even harder to determine which companies are responsible for setting them. But a new tool from Mighty Earth promises to fix this problem.

The Soy & Cattle Deforestation Tracker connects meatpackers and soy traders to deforestation and land clearance in the Brazilian Amazon and Cerrado, ranking companies based on the extent and severity of the clearance giving each of them a score out of 100. JBS, the world’s largest meat company, tops the list with the most land cleared at 100,711 hectares. Mighty Earth also claims that as much as 74 percent of that land was cleared illegally.

In Brazil, most land is cleared by wildfires that often burn for weeks at a time. The fires are set intentionally by large-scale farming operations to clear land that will grow soya and other crops that are predominately used for animal feed. Brazil is one of the largest producers of soybeans in the world, and approximately 80 percent of soybeans produced globally are used as food for farmed animals including pigs, cows, and chickens.

“McDonald’s and Tesco customers need to know that their Big Macs and chicken filets are coming directly from the companies most responsible for the unconscionable inferno happening in the Amazon right now,” says Glenn Hurowitz, founder and CEO of Mighty Earth, a global environmental advocacy organization.

Driven by the global demand for animal feed, the soybean acreage in Brazil is expected to grow at an unprecedented 27 percent in the next 10 years, reaching a total of 116 million acres. The demand for farmland also displaces cattle ranchers, who in turn, burn more forests to make room for their pastures. This trend comes as no surprise to locals, who have watched the fires intensify for years with little to no intervention from the federal government.

Over the past decade, the Amazon Rainforest has become an international symbol of deforestation, resulting, more recently, in an outcry of public support to protect what is left of the vital ecosystem. And while resulting zero-deforestation commitments have slowed down the destruction of the Amazon, the neighboring Pantanal and Cerrado biomes have been under no such constraints.

“The zero-deforestation commitments we saw in the Amazon biome had ripple effects as companies and businesses looking to expand their agricultural footprint in Brazil had to look outside this area to the Pantanal wetlands and Cerrado grasslands,” says Cameron Harsh, Programs Director with World Animal Protection (WAP). “And you started seeing deforestation fires in the Pantanal and Cerrado over the last few years.”

According to a special report released by Reuters in 2018, the Cerrado is disappearing nearly four times faster than the Amazon Rainforest. The grasslands—which are considered one of the most biologically rich ecosystems of their kind—have seen more than 50 percent more deforestation than the rainforest since 2008. In May, the wildfires burnt at the highest rate since 1998, and Harsh says the ecosystem could collapse in less than 30 years if agribusiness continues to expand at the current pace.

“JBS and Cargill are continuing to drive the wholesale destruction of the Amazon because their corporate customers are letting them get away with it,” says Hurowitz. “There’s no excuse for any supermarket or fast food company to be doing business with the companies fueling the deforestation and fires threatening local communities, devastating wildlife, and disrupting our global climate.”

The resurgence of fires in the Amazon, Pantanal, and Cerrado biomes has also killed millions of wild animals. One study estimates that close to 1,470 jaguars have been killed or displaced in the Amazon between 2016 to 2019 from forest fires and deforestation. “We have seen jaguars completely carbonized, and others with their paws burnt, completely dehydrated or starving,” says Joao Almeida, Executive Director of WAP, Brazil.

“These numbers are not a fluke data point, they are part of a constant upward trend in environmental destruction in the past three years—the result of an intentional government policy,” the executive director of World Wildlife Fund, Brazil, Mauricio Voivodic, told the Buenos Aires Times.

According to the world’s leading climate scientists, the Amazon is a “key buffer against climate change,” one that advocates say is worth protecting at all costs.

“Europe and the U.S. need to act right away to ban imports linked to deforestation,” says Hurowitz.