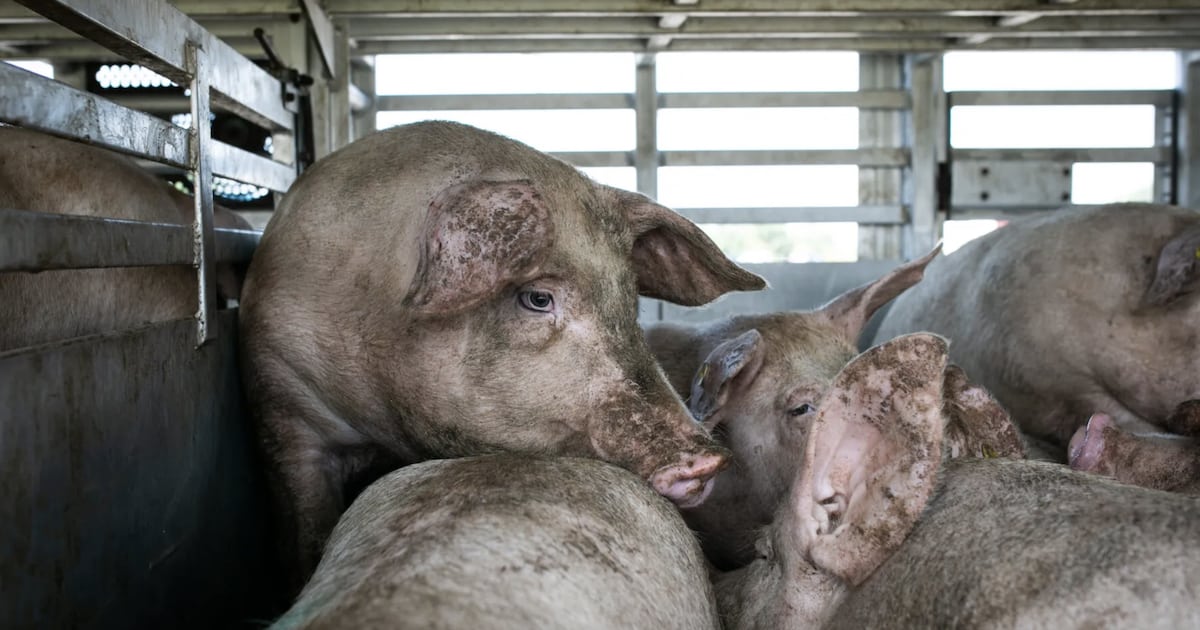 Killing living beings is not something most people want to do. Yet slaughterhouses are places that authorize workers to kill. These slaughter plants are often dangerous for workers and are horrific end-to-life sites for the animals we eat for food.

What Is a Slaughterhouse?

A slaughterhouse is where farmed animals are taken to be killed, primarily for food. This is where their bodies are harvested for human use. Many animals also die before they arrive at the slaughterhouse, either in transport on the way to be killed or during the process of being raised under conditions of extreme confinement.

How Many Slaughterhouses Are There in the U.S. Today?

There were 2,785 slaughterhouses in the United States in 2022, according to USDA reports on establishments that kill and butcher animals for the production of red meat. Those animals are cows, pigs (hogs), and sheep. This number does not cover poultry and fish slaughter plants, which include 349 federally-inspected poultry slaughterhouses.

The slaughter industry is highly concentrated: roughly a dozen of the largest cattle slaughterhouses in the U.S. kill more than half of the cattle each year. Other livestock also have similarly concentrated slaughter sites.

Which State Kills the Most Animals for Meat?

Slaughterhouses are places where humans kill nonhuman animals for the production of meat as food. This act of killing animals alone could be considered cruel.

Animal welfare advocates have found, however, that there are degrees of nuance within the main function of a slaughterhouse. The ways that most animals are killed for food production, regardless of the conditions in which they were raised or bred, are often unnecessarily frightening and painful.

In the field of animal protection, “cruelty” usually describes harm to nonhuman animals, but it’s important to recognize that harm occurs in many ways, including to workers, communities, and the wider environment, that can sometimes be forgotten in dominant vegan and animal rights narratives.

Before animals are transported to the slaughterhouse, they are often starved. Fish, for example, become easier to handle when deprived of food. The RSPCA welfare standards for farmed salmon caution that depriving fish who are used to regular feedings “will usually have an adverse effect on welfare.” The RSPCA standards for salmon require that they not be forced to fast for more than 72 hours, but such standards only cover salmon and rainbow trout, in limited farming circumstances.

Meat supply chain planners factor in that a certain number of animals, who are forced onto trucks that carry them long distances away from the farms where they are raised alive, will die during the trip to the slaughterhouse. It’s estimated that annually in the U.S. this number includes about 20 million chickens, 330,000 pigs, and 166,000 cows. U.S. law requires that animals other than birds be unloaded, rested for five hours, fed, and given water when transported for more than 28 hours. Animal Outlook has observed that these laws are not enforced.

“Dead on arrival” is one of four major violations that federal food inspectors consistently found at U.S. poultry slaughterhouses in 2021. After one visit to a slaughter plant operated by Tyson Foods in Nashville, Arkansas, USDA inspectors wrote, “We observed a bird crushed and suffocated between a damaged, lifted, bent floor of the trailer and the wire of a cage.”

Animals Are Brutally Beaten in Slaughterhouses

Beating animals is not an uncommon occurrence in the world of meat production. In one of their many investigations, Mercy for Animals found that pigs on U.S. factory farms had their testicles ripped out without any pain relief. Workers then grabbed some baby pigs by their back legs, swung the piglets high up in the air, and killed them by slamming their heads against the ground. A 2018 Animal Aid investigation video “revealed a worker slamming a gate shut on an animal’s head and a bewildered cow being beaten on her way to her death.”

Cattle Prods Are Used To Make Them Move

Upon arriving at a slaughterhouse, workers may use painful electric shocks, and the fear of getting shocked, to get cows or pigs to quickly unload from a truck. Using electric cattle prods is considered a use of force that can be classified as gentle, intense, or rough. When electric prods or other restraining devices touch cows’ bodies, cows tend to moo and bellow. Their cortisol levels also tend to increase, which is a sign of stress.

In a 2018 study of 242 slaughterhouse trucks unloading 8,132 cows in Uruguay, researchers found that workers used sticks and/or electric prods in 80 percent of unloading events “to force animals off the truck.” Shouting was used in 60 percent of unloading events. Most animals in the study (90 percent) had one or more bruises, which is a sign of lower animal welfare. Usually one worker and sometimes two or more workers were tasked with unloading cows from the truck. Using no devices to force animals to unload from a truck, or only a flag, is considered better and less traumatic for animals than using a cattle prod.

Reducing yelling and the use of dogs and electric prods is considered better for maintaining low cortisol and stress levels in cattle, according to a review of studies on cattle welfare in outdoor feedlot pens. Other methods of forcing animals to move include using rattle paddles that resemble rowboat oars, red sort boards that look like cutting boards with cut-out handles, and whistles.

Animals Are Tortured and Abused in Slaughterhouses

Abusive practices within factory farming are frequently documented by animal rights groups even though many of these are banned by meat industry and veterinary standards. On August 4, 2007, a federal inspector, Dr. Dean Wyatt, found many violations of the Humane Slaughter Act at a larger hog slaughterhouse in Oklahoma. In his statement Wyatt wrote, “Workers were trying to use a captive bolt stun gun” on pigs that were already shackled and bleeding out, indicating that they knew that the pigs were still conscious.

Conditions in Slaughterhouses Are Terrible

Before entering the stun box, most cattle in the study (64 percent) balked—or stopped, put their head down, and took a step backward instead of forward. It was at this point that most of the aversive events (70 percent) occurred. Once they were in the stun box, cows often defecated and kicked a rear leg toward a stimulus. Defecating and kicking are signs of being fearful and stressed.

While moving from initial staging pens to eventually get to the stun box, a significant portion of cows lost their footing and slipped (27 percent) due to wet or muddy floors.

Abattoirs can have noisy trucks that park near holding pens. In this study, the cows bunched together in a tight circle, also called milling, when a rendering truck approached and parked nearby. Milling is a sign of fear and stress. Cattle are more sensitive to high-pitched sounds than humans, and sounds from the truck’s hydraulic arm, as well as the truck’s clanging dump bucket, may have made the cows nervous and more likely to resist entry into the stun box.

How Are Animals Killed in a Slaughterhouse?

Animals are meant to be stunned first so that they are unconscious before they are killed. The method of stunning can be electric, gas, or mechanical. The idea is for the animal to be killed quickly—within 15 seconds according to one standard—after they are stunned. They are hung up or laid down for “sticking,” the term that is used to describe taking a knife to their neck arteries so that the animals will bleed to death. This form of death is technically called cerebral anoxia, which means there is insufficient oxygen going to the brain.

Animals Aren’t the Only Ones Affected

People Have Never Been Exposed to This Kind of Brutality Before

The language used to describe acts of killing animals for food tend to hide the reality of suffering that occurs within slaughterhouse walls. For example, to “stick” a cow is to slice the vessels in their throat using a knife so that the animal bleeds to death. In a 2018 article, Maša Blaznik explores the harmful implications of newly exposing young people to careers in butchery by describing the emotional deadening and scarring of people who do the dirty work of killing animals.

People who kill animals in slaughterhouses have been found to have higher self-reported rates of “somatization, anxiety, anger hostility, phobic anxiety, and psychotism,” than office workers and retail meat-packing workers.

Perpetration-induced traumatic stress is a subcategory of post-traumatic stress disorder that is known to occur among animal care workers, veterinarians, lab workers, veterans, and police officers. Academic researchers are increasingly interested in this specific form of PTSD when discussing the psychologically debilitating nature of slaughterhouse work.

How Can We Stop This Brutal Abuse?

As with any social issue, many different forms of action can help stop the abuse of animals in slaughterhouses. One approach would be to adopt personal lifestyle changes and join a growing movement of vegans and others aiming to reduce the overall consumption of meat. Another approach would be to support the efforts of alternative meat production.

Going vegan has become popular among Gen Z and Millennials, and these younger people are more likely than older generations to change their diets because of the central role that animal agriculture plays in climate change.

The increasing availability of plant-based foods and meat alternatives offers a comforting landing spot for people seeking to change their diets.

As well as changing your diet and helping others to do the same, you can take some time to learn more about the experiences of animals and slaughterhouse workers and consider organizing for large-scale social change. Some places to start include Animal Outlook’s investigation into the torture involved in animal transportation and Jessica Slade and Emma Alleyne’s systematic review of the psychological hazards of slaughterhouse work.