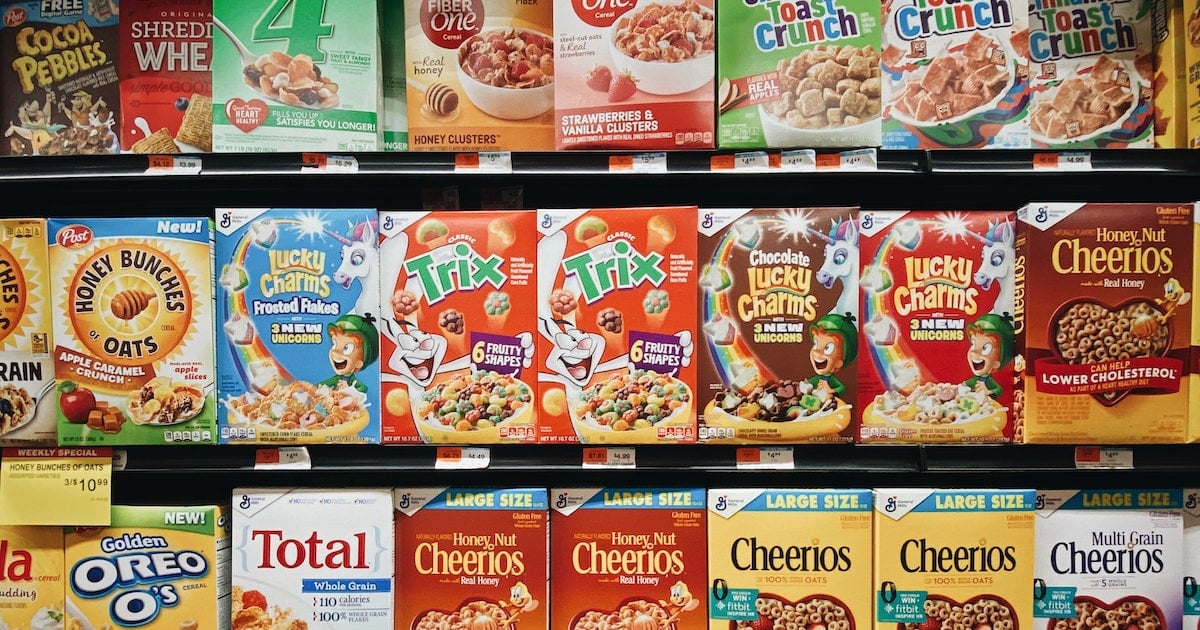 You may have been shocked by the vast array of products being boycotted during the recent Kellogg’s strikes that took place in the United States. Workers and organizers were calling for boycotts of everything from Incogmeato and MorningStar Farms to breakfast cereals, all of which are owned by Kellogg’s. Yet the grouping together of so many brands in one company is business as usual in the world of Big Food.

What Is Big Food?

Similar to Big Pharma, Big Agriculture, and Big Oil, Big Food is characterized by the domination of a major market by just a few large companies. In this case, the industry is food being marketed and sold to consumers, and the companies include Kellogg’s, Nestlé, and General Mills.

Who Is the Big Food Industry?

There are a few major players that make up Big Food. These companies tend to have products in every aisle of the supermarket, from frozen prepared foods to soft drinks and teas and from breakfast entrees to vegan and vegetarian alternatives.

How Do I Recognize a Big Brand of Food Versus a Smaller One?

One of the most obvious indicators that a brand is owned and operated by Big Food is that it is a household name that has been established for a long time. These tend to be the brands that are reliably found on grocery store shelves across different cities and even countries. Smaller, up-and-coming brands are less easily recognized and tend to be available in a more limited geographic area.

Reading the packaging of a product can also help determine whether or not a product is owned by a Big Food company. Most products will say somewhere on the label which company owns and produces the item in question.

What Are the Goals of the Big Food Industry?

Ultimately, the goal of the companies in the big food industry is to make money. The greater their market share the more money they are able to make. There are several methods by which they accomplish their end goal and maximize their profits.

One method by which Big Food companies save money is through integration. There are two types of integration: vertical and horizontal. Horizontal integration is when a company takes over another company (or brand) in the same category of business (say, breakfast cereals). This type of integration creates the massive groupings of brands and products that make up Big Food. An example is when Kraft and Heinz merged in March 2015 to become a food giant.

The other type of integration is vertical. This method of integration involves a company expanding to control steps within its own supply chain. An example is Tyson Foods having their own truck drivers deliver their products instead of hiring an outside distribution company to move their meats. This type of integration also impacts farms, which are often involved in contracts with Big Food outlining what they can and can’t produce and the methods they have to use. These contracts also work to siphon off most profit that would normally be reinvested into the farm and give it to the company’s shareholders instead.

Another way of reducing costs is through factory farming. This method of farming seeks to produce the greatest amount of product at the lowest possible price. This leads to methods of production, such as the heavy use of pesticides and fertilizers, that are harmful to the environment and are ethically questionable.

Unidentified Origins of Food on the Table

Large companies also invest heavily in advertising and package design for their products. Brands will use phrases such as “sustainable” and “responsibly sourced” alongside images of animals in rolling pastures to make consumers more comfortable with purchasing their products, despite the sad reality of how animals are kept on factory farms and the environmental damage caused by industrialized agriculture. This trend in advertising and labeling has been termed humane-washing.

A study from the University of Southern California found that consumers are more likely to believe that visually appealing food is healthier and more sustainable than uglier foods, even when the two have the same ingredient list. Advertisers for large brands know this and go to great lengths to make their foods appear extra appealing in advertisements.

How the Food Industry Is Deceiving You

Corporate accountability is how a publicly traded company performs in areas that are not financial, for example, sustainability and social responsibility. It can take several forms but one that is frequently seen is the adoption of standards above the bare minimum that is legally required. Typically these are goals with dates several years out. At the time of the announcement, companies tend to enlist the media and other ways of interacting with consumers to make themselves seem sustainable and ethical. However, a 2020 report found that some of the biggest brands are failing to reach their own benchmarks. For example, in 1990 Coca-Cola pledged to make its bottles with 25 percent recycled plastic, a goal which they still fell short of 30 years later.

Because the primary goal of Big Food is to make money, these companies frequently place profit above the health of consumers, the environment, and animals. Toward this end, ingredients are used in the United States are not allowed in the European Union because of their negative impacts on human health. The food sold in the United States is generally of a lower quality than that sold in the European Union, with fewer whole ingredients and more additives, frequently resulting in a less healthy product.

The United States has notoriously poor food governance. Presently, there is a list of ingredients “generally recognized as safe” (GRAS). The ingredients listed as GRAS can be used in food production with very little government oversight. To make matters worse, GRAS items are added to the list by food producers. Such questionable substances as carcinogens and trans fats have been added to the list by industry without any oversight.

Many products made by Big Food are made from heavily processed ingredients. Processing foods can reduce the nutritional value of the raw ingredients and links have been suggested between ultra-processed foods and obesity as well as chronic diseases like diabetes and heart disease.

The suffering of animals on factory farms in support of Big Food is well documented. In order to produce food at such a large scale so quickly animals endure deplorable conditions such as standing in their own waste (if they’re lucky enough to be able to stand) and being repeatedly bred only to have their young taken from them to be sold for meat when just a few hours old.

What the Food Industry Doesn’t Tell You

Those in Big Food claim that factory farming is necessary to feed the growing global population. When we consider the vast amount of water usage, the poor return on calories, and the land degradation that characterizes diets heavy in meat, in combination with the huge amount of food waste that takes place every day, it becomes obvious that sustainable alternatives are possible. By reducing food waste and focusing on the production of plant-based whole foods, everyone could eat with a reduced environmental impact.

Big Food likes to market its vegan and vegetarian foods as revolutionary and new, but the reality is that veganism has been around a lot longer than many vegans realize, particularly in communities that are often sidelined by the mainstream vegan movement. Many don’t realize that the fastest-growing vegan demographic is Black people. Further, 14 percent of Brazilians identify as vegetarian or vegan.

Most of the foods produced by Big Food are made with ingredients that are shipped long distances to be processed into their end result. The shipping of these ingredients negatively impacts the environment. General Mills, for example, sources corn from the Midwestern United States but has factories as far away as California.

The Battle Against Unhealthy Ingredients

Many of the ingredients that go into the products made by Big Food, especially in the United States where government oversight is so weak, contain dangerous ingredients such as carcinogens and preservatives suspected to have lasting health impacts on consumers.

The scale at which items are produced by Big Food allows for costs to be minimized. Because they are able to produce products more efficiently than smaller brands, often at the expense of quality and nutrition, products from Big Food tend to be less expensive than products from competitors.

Though a number of smaller brands have emerged on the plant-based scene and introduced an array of products, Big Food has also made massive investments in the industry. Kellogg’s brand MorningStar Farms is perhaps one of the most recognized plant-based brands in the United States.

How People Around the World Eschew Big Food

People all over the world are eschewing Big Food in favor of smaller brands. In fact, since 2013 $17 billion in consumer spending has shifted from larger brands to smaller ones, and 29 percent of consumers also report that they are increasingly interested in consuming smaller brands rather than continuing to support Big Food.

How You Can Help Hold the Big Food Industry Accountable

Switch to a Vegan or Vegetarian Diet

Choosing to consume vegan or vegetarian foods is a powerful way to reduce the negative impact our food choices have on animals and the environment. In addition to not directly contributing to animal suffering, even if we choose to consume meat alternatives such as Beyond or Impossible meats we are not contributing to the detrimental impacts that grazing, growing food for farmed animals, and other agricultural activities have on the environment.

Perhaps one of the most effective ways to fight back against Big Food is to purchase locally-produced foods. By choosing to support local farmers with ties to the communities for which they produce we are withholding our money from Big Food, instead keeping it in the community to stimulate local economic activity.

Paying close attention to the labels on supermarket foods and knowing what key phrases and words really mean is an important part of fighting back against Big Food. In addition to the manufacturer listed on the label being a good indicator of whether or not the product is produced by Big Food, knowing key phrases can help reduce the likelihood of being tricked by false advertising.

Discover the Wealth of Whole Foods

Consuming whole foods, especially plant-based whole foods, helps to reduce the amount of money being spent on products produced by Big Food. This is especially true if the whole foods are locally sourced.

Big Food contributes to and demands animal suffering to turn a profit. This is not just because animals suffer on factory farms that produce dairy, meat, and eggs, but also because wildlife is impacted by the heavy use of pesticides and fertilizers. Wildlife is further negatively affected by the deforestation of land that is necessitated by industrial agriculture.

Just like the better-known conglomerates in Big Oil, Big Ag, and Big Pharma, Big Food holds a vast amount of power and influence. Yet recent trends such as an increase of interest in plant-based diets, sustainability, smaller brands, and locally produced food has created challenges for the companies that make up Big Food, as more consumers are choosing foods from other sources.

Why Some Food Labels Are More Trustworthy Than Others