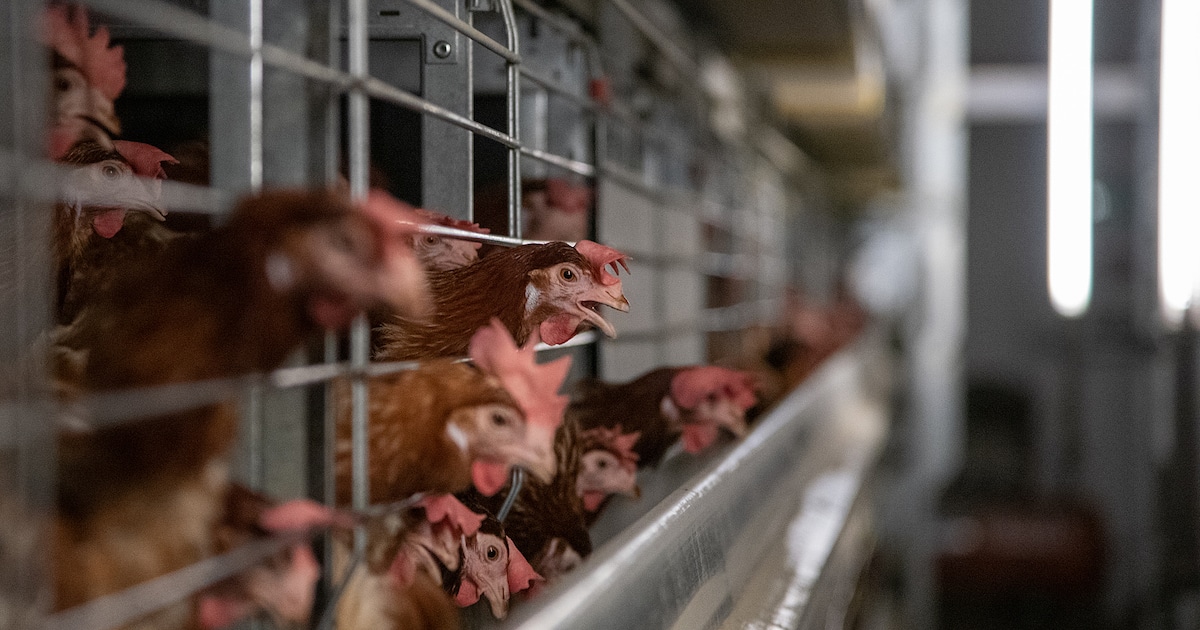 In 2017, the global chicken population was 22 billion. 15,840,000,000, or 72 percent, of those birds are housed on factory farms awaiting slaughter at approximately 50 days old. This is the sad reality for billions of animals every year on industrial farms around the world. In addition to the serious animal welfare implications, industrial agriculture also has lasting effects on the environment and human health.

What Is Industrial Agriculture?

Industrial agriculture is a process of farming that prioritizes the production of large quantities of food. Industrial farms tend to share a number of traits that work to maximize production while minimizing the monetary cost of production.

Industrial farms focus on the production of a particular crop or product. This leads to land being repeatedly planted with the same crop year after year with little regard given to the impacts that this practice has on soil quality and the environment. When an animal is the product in which an industrial farm specializes, welfare is typically treated as a second-class concern with small living quarters, an unnatural diet, and often no access to the outdoors.

Fertilizers and pesticides are generally used heavily by industrial farms to encourage large crop yields. The soil degradation that is caused by planting the same crop repeatedly on the same land drives the need for increasing fertilizer use. Per the United Nations Food and Agriculture organization, the demand for three of the most common types of fertilizers, potassium, phosphorus, and nitrogen, is expected to increase to over 200,000 tons for the year.

Between 1900 and 2000 the share of the United States workforce involved in agriculture fell from 41 percent to 2 percent. Farm size doubled between 1950 and 1997 while the number of farms was reduced by more than half over the same period. This decline exemplifies the shift from small farms with diversified crops, as was the norm in the 1900s, to corporations controlling the vast majority of agricultural land and resources in the U.S.

Industrial farming practices entail the repetition of the same activity repeatedly or for long periods of time over vast tracts of land. Such farms utilize machinery to perform these tasks as a means of increasing efficiency.

Industrial agriculture as we know it today is the result of centuries of technological advancement and colonization.

In the Americas, the animals that are recognized as food animals were originally introduced by colonists. These animals had a detrimental impact on indigenous communities as they brought with them diseases that had never before been introduced on the continent. By the 16th century, the economy in the Americas depended upon raising livestock. This new method of food production required large amounts of land.

In Britain during the 17th century, the British Agricultural Revolution brought with it new methods of farming including new crop rotation systems that increased productivity and allowed for larger numbers of animals to be fed.

The industrial revolution brought with it selective breeding which created animals that were larger and produced more products increasing productivity.

Prontosil, a drug developed in Germany in 1935, was marketed in Britain for animal use from 1938 onward.  While World War II prevented the continued development of antibiotics in Europe, in the U.S. ties between pharmaceutical companies and food companies expedited development. In 1948, sulfaquinoxaline became the first antibiotic approved for routine inclusion in poultry food. In the early 1950s routine antibiotic use spread from the U.S. to Europe. However, European nations retained far greater control of antibiotic use, as producers were only able to purchase feeds pre-mixed with antibiotics rather than obtain the antibiotics separately.

In the U.S. during the 1970s, President Nixon’s Secretary of Agriculture, Earl Butz, openly favored industrial farms and practices telling farmers to “get big or get out”. His policies, including a massive grain sale to the Soviet Union, fanned a frenzy of farmers producing as much as they could as prices increased. This frenzy could only last so long and in the 1980s the bubble burst and prices fell dramatically due to overproduction and the country fell into a rural crisis with thousands of farms going under and were acquired by agricultural giants.

Today the majority of food is produced by giant corporations that use industrial agriculture as a means of increasing production while reducing the cost to the detriment of human and animal health.

Why Is Industrial Agriculture Bad?

Industrial agriculture has serious consequences for the environment, human health, and animal welfare.

A CAFO, or concentrated animal feeding operation, can house anywhere from hundreds to millions of animals and emphasizes production and economy over welfare. The animals housed by a CAFO are housed for 45 days or more a year in an area without vegetation. Cattle, pigs, and chickens are the species most commonly housed by CAFOs. The emphasis on the economy leads to serious negative animal welfare outcomes.

Chickens are commonly housed in warehouses with tens of thousands of other birds. Due to the kind of bedding used in these warehouses holding the chickens’ waste, chickens often suffer from ulcerated feet and burns. The stress that these conditions cause for the animals makes them more likely to pluck themselves and peck each other. To prevent this behavior, the birds are debeaked at a young age.

GMOs, or genetically modified organisms, are those that have had their genes edited for a particular purpose. There is no evidence that GMOs have negative impacts on the consumer’s health. Any living organism can be genetically modified, and the process has been applied to both plant and animal agriculture. In plants, genetic modification can help reduce the number of pesticides and fertilizers needed and even increase the nutritional value of food.

In animal agriculture, genetic modification has been used to produce cattle that are born without horns which prevents them from undergoing the painful removal process that is common practice on industrial farms. Genetically modifying animals provides a way of enhancing welfare within the confines of an industrial system. However, genetically modifying animals cannot completely eliminate the negative welfare or environmental effects of industrial agriculture and instead provides a band-aid solution to the root problem.

Farmers that handle pesticides run the risk of a variety of health implications including rashes, irritation, headaches, comas, and potentially even death. The symptoms experienced are influenced by the pesticide, length of exposure, and how the exposure took place.

In the U.S. certain crops, such as grain, corn, and soy, are subsidized by the government. Due to these subsidies, it is especially economically advantageous to produce these crops. The large amount and low cost to produce these crops have caused them to be incorporated into virtually every processed food. These foods play an especially important role in junk foods.

The heavy use of antibiotics in livestock on industrial farms causes bacteria to evolve and become resistant to antibiotics. Not only does this negatively impact the animals on these farms, but these resistant bacteria can also spread to consumers. Many of the antibiotics used in agriculture are also used to treat diseases in people, so their efficacy to fight disease in humans is reduced.

How Does Industrial Agriculture Affect the Environment?

The environmental implications of industrial agriculture are numerous and far-reaching.

Industrial agriculture requires vast tracts of land for the cultivation of crops whether to feed livestock or to feed people. This need has caused the deforestation of key ecological areas, including the Amazon rainforest. Between August 2019 and July 2020, 4,281 sq miles of the rainforest was destroyed.

Monoculture is the planting of a single crop on large tracts of land. This practice reduces the habitat available for wildlife and insects which attempt to adapt to the new environment and interact more frequently with the crops. This interaction causes farmers to use more pesticides in order to protect their economic interests. The increase in pesticide use causes contamination of water, soil, and air and has lasting negative effects on the environment and the animals that live in it.

In addition to fertilizer and pesticides polluting the water supply, CAFOs produce vast amounts of manure. This manure enters the water and can cause algal blooms which are detrimental to marine life. Experts hypothesize that the release of 215 million tons of wastewater from a fertilizer production plant into Tampa Bay in early 2021 created the ideal conditions for the red algal blooms that are currently impacting the coasts of Florida. The blooms have killed dozens of fish.

The animals being housed by CAFOs produce massive amounts of methane, nitrous oxide, and ammonia which accelerate climate change and can cause health problems in people.

Industrial agriculture demands a large portion of the earth’s natural resources. Food production accounts for 70 percent of freshwater use. This translates into water being used from underground aquifers at a rate much faster than the aquifers are replenished.

According to the United Nations, irrigation runs the potential of causing increased erosion, expedited water pollution, and deteriorated water quality. These outcomes can prove detrimental to wild populations of animals and plants in surrounding areas.

In addition to driving deforestation and the destruction of habitats, industrial farming also destroys the rich communities of invertebrates and insects that work to recycle plants and maintain soil fertility. Destroying these communities drives the need for fertilizers to replace the natural enrichment process of the soil.

In addition to the tons of greenhouse gases emitted by CAFOs every year, industrial agriculture utilizes vast amounts of fossil-fuel-powered energy to drive production. Another driver of climate change is the heavy application of fertilizers and pesticides that is standard practice on industrial farms.

What Are the Social and Economic Impacts of Industrial Agriculture?

During the late 1900s, the number of small and mid-sized farms shrank as more farmers went under and were acquired by larger conglomerates. Today 70 percent of the pork industry is controlled by just four companies. In the 1970s the four largest pork producers controlled just 30 percent of the market.

Harm to Neighboring and Downstream Economies

The runoff from industrial farms has lasting implications for the surrounding communities. Polluted water costs billions annually to clean in preparation for consumption. The smell of living near a CAFO can reduce property values by as much as 30 percent.

What Are the Alternatives to Industrial Agriculture?

The primary alternative to industrial agriculture is sustainable agriculture. There are a variety of different sustainable methods that can help to reduce the negative impacts of food production.