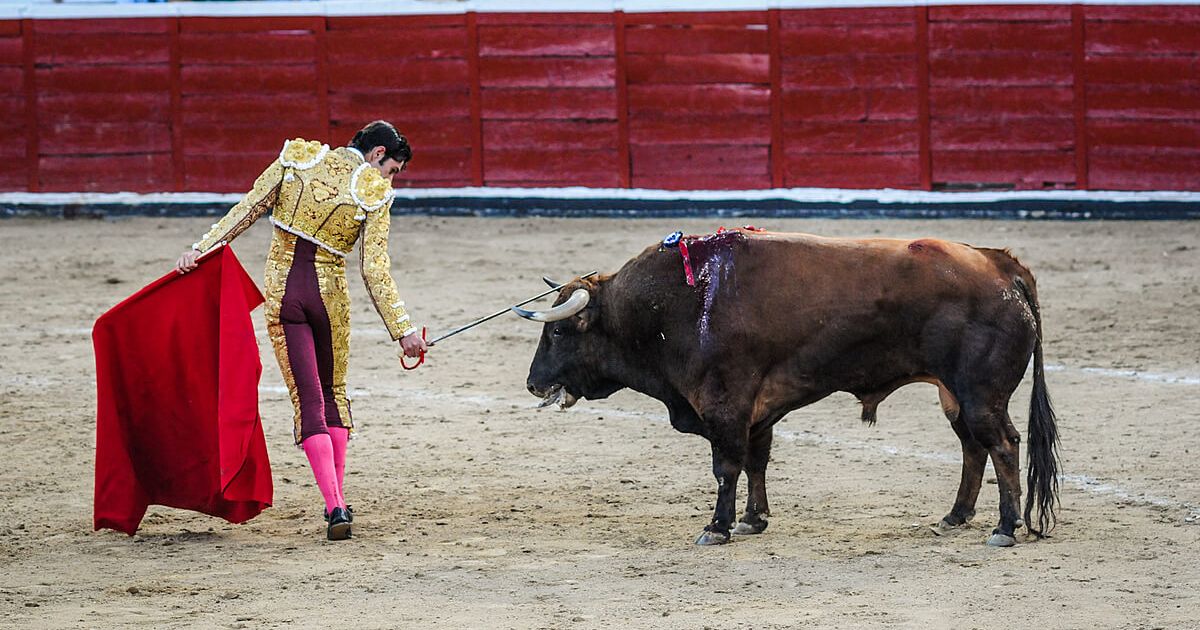 Considered by some cultures to be an art, the sport of bullfighting torments, attacks and eventually kills bulls. The practice is portrayed by many to be a fair fight between man and animal, and a spectacle of skill and physical strength. In reality though, the bull is subjected to immense physical pain and psychological stress, and the event almost always ends in their death.

Bullfighting is a sport responsible for taking the lives of 250,000 bulls every year. There are different forms of bullfighting. The most prevalent form today is Spanish-style bullfighting — “corrida de toros.” During one of these events six fights take place. Each of these fights ends in the death of a bull.

Before the event even begins, each bull grows substantially weaker as he is subjected to physical and psychological abuse. Common practices include beating the bull, giving the animal tranquilizers and laxatives, and rubbing petroleum on his eyes to blur his vision, and having heavy weights hung around his neck. The aim of these practices is to deplete the bulls’ physical strength so that the bullfighters are able to finish them off in the arena.

Across the three main acts of the fight itself, the bull is tormented and repeatedly stabbed in the neck. The final act ends with the matador stabbing the bull between the shoulder blades with the aim of severing the bull’s spinal cord. The paralyzed but potentially still conscious bull has his ears and tail cut off, and victory is declared.

What Is a Bullfighter?

The principal bullfighter, known as the matador, is the one responsible for killing the bull. Before he does this, his “cuadrilla,” more or less his team of assistants, attacks and torments the bull. There are two main roles within the cuadrilla, known as picadores and banderilleros. Each has their own part to play in weakening the bull before the final performance of the matador.

The mounted picadores enter the ring at the beginning of the first act, each armed with a lance. The bull is tormented to encourage him to charge at one rider’s horse, giving one of the picadores the chance to spear the bull in his neck or shoulder. Next to enter the arena are the banderilleros. These men are on foot and are responsible for preparing the bull for the matador’s kill. This involves piercing the bull’s neck with four wooden darts, forcing him to lower his neck to make the matador’s target more accessible.

Finally the matador enters, the bullfighter responsible for slaying the bull. As the most senior in the bullfighting team, the role of the matador is respected and considered to be highly skilled. While performing a series of dance-like movements with a brightly coloured cape, the matador aims to torment the bull, enticing him to charge so that the kill can be made.

The precise origins of bullfighting are difficult to trace but the practice is known to have roots that go as far back as 2000 B.C. Bullfighting as we know it today began in the 18th century. As the sport became increasingly ingrained in Spanish culture, the role of the matador became regarded as an honorable profession.

Bullfighting was such an integral part of Spanish culture that attending a bullfight was at one time seen as an expected part of visiting the country. In recent years, however, as the barbarism of the events has been more widely recognized, bullfighting has become less popular with the public. Between 2007 and 2019, before the impact of COVID-19, the number of bullfights held in Spain decreased by over 2,000 — more than 50 percent.

Bullfighting is far from the fair fight that it is portrayed by supporters to be. Bulls are physically and mentally tormented before entering what is a stressful environment, then tormented again, stabbed multiple times and eventually killed.

As dangerous as they can be, bulls are naturally prey animals. When they attack the bullfighter, they’re not doing so as a predator but instead as a prey animal who perceives themselves to be in danger. A bull charging at a matador’s cape has been stressed and tormented to the point that they have no choice but to attempt to remove the stressful object from their environment. The bull is exhibiting an instinctive response to a highly stressful situation, not a desire to fight.

In each stage of the event the bull experiences intense fear and physical pain. They are also subjected to exhaustion, dehydration and eventually a slow and painful death.

Why Are Bulls Killed After a Bullfight?

The aim of the matador is always to kill the bull, and a fight is only considered successful if it ends in the bull’s death. During the final act of the event, the matador is given a time of 10 minutes during which to stab the bull between the shoulder blades, severing his spinal cord. The move has to be performed in a specific way, meaning that the matador often misses and stabs the bull without killing him. If the matador is unsuccessful within the first 10 minutes, he may be given an additional five minutes. In the event that he is still unsuccessful, other members of the team enter the arena and kill the bull, who is often then butchered and sold as meat.

What Happens if the Bull Kills the Matador?

In the rare event that the bull kills or severely injures the matador, the bull is killed by another member of the cuadrilla. Although a dangerous practice for the people involved, the risks to their personal safety are somewhat limited by the bull’s weakened state.

In 2016, Victor Barrio became the first matador to be killed by a bull in over 30 years. The bullfighter died of a punctured lung and severed aorta after the bull’s horn penetrated his chest.  Prior to this, the last fighter to be killed in the ring was Jose Cubero in 1985.

What Are the Rules of Bullfighting?

The majority of the rules for bullfighting focus on the performance and ceremonial aspects of the event rather than animal welfare. Each bullfighting event involves six fights, with each of the three matadors taking part in two. Each fight is divided into three main acts.

The event itself begins with the bull being tormented with large colorful capes. Men riding horses, known as picadors, enter the ring and proceed to stab the bull in his neck with barbed lances.

Banderilleros, men on foot carrying wooden darts, then enter the ring. This act ends when the bull has had four of these darts stabbed into his neck. The bull’s neck is the primary target during the initial two acts because the bull’s neck needs to be lowered for the matador to be able to perform to the fullest during the final act.

The final act is known as the “suerte suprema,” which translates as the “ultimate fate.” The matador performs specific artistic movements while waving around a large, boldly colored piece of fabric. The aim is to torment and tempt the bull to charge at them. This act, and the fight as a whole, ends when the matador throws himself over the bull, stabbing him between the shoulder blades with the aim of severing his spinal cord.

The sport has been outlawed in many countries across the world but is still legal in some including Spain, France, Ecuador, Mexico, and Portugal. Animal advocates want to see the sport abolished, but resistance comes from those who are more concerned about the cultural and economic impact of banning the practice than the suffering it causes.

Regions of Spain have attempted to impose local bans on bullfighting, but in 2016 were barred from doing so by the Spanish Constitutional Court. Bullfighting is considered by some to be such an integral part of Spanish heritage that there is substantial resistance to its demise. Despite this, the number of people attending bullfights in Spain is falling, especially among younger generations.

Since the early 1500s, bullfighting has been a popular sport in Mexico, with children as young as six years old allowed to train towards participation. Although bullfighting is still legal in Mexico as a whole, regions of the country have placed bans on the practice. Earlier this year, Mexico City extended what had been a temporary ban on the sport, dealing a significant blow to the country’s bullfighting industry.

Where Is Bullfighting Banned?

Many countries have banned the practice including Canada, Cuba, Italy, Denmark and the United Kingdom. Bullfighting laws vary across the U.S., with all forms of the sport banned in some states but exceptions still existing in others. In Florida, for example, all styles of bullfighting have been outlawed. In states such as Texas, however, “bloodless” bullfighting events can still be legally held.

What Are Bloodless Bullfights?

Traditional in Portugal, bloodless bullfights involve the bull being mentally tormented in the ring, but not physically injured or killed. A bloodless bullfight ends when the cavaleiro is successful in grabbing the bull by the horns, as opposed to killing him. The emotional torment, however, remains and the bulls are sent to slaughter after their ordeal. Blood may not be shed in public, but the practice in most cases still ends in the animal’s death.

The only way to end bullfighting is a worldwide ban. You can help make this possible by supporting organizations that are campaigning for an end to bullfighting.

Until this happens, bullfighting relies on its crowd. Without sufficient spectators and demand for the sport, the bullfighting industry would not be able to survive. Although bullfighting events still attract crowds in the thousands, their popularity is in decline. By not attending these events, educating others about what really goes on, and persuading them to boycott the sport are all simple ways to help bring an end to bullfighting.