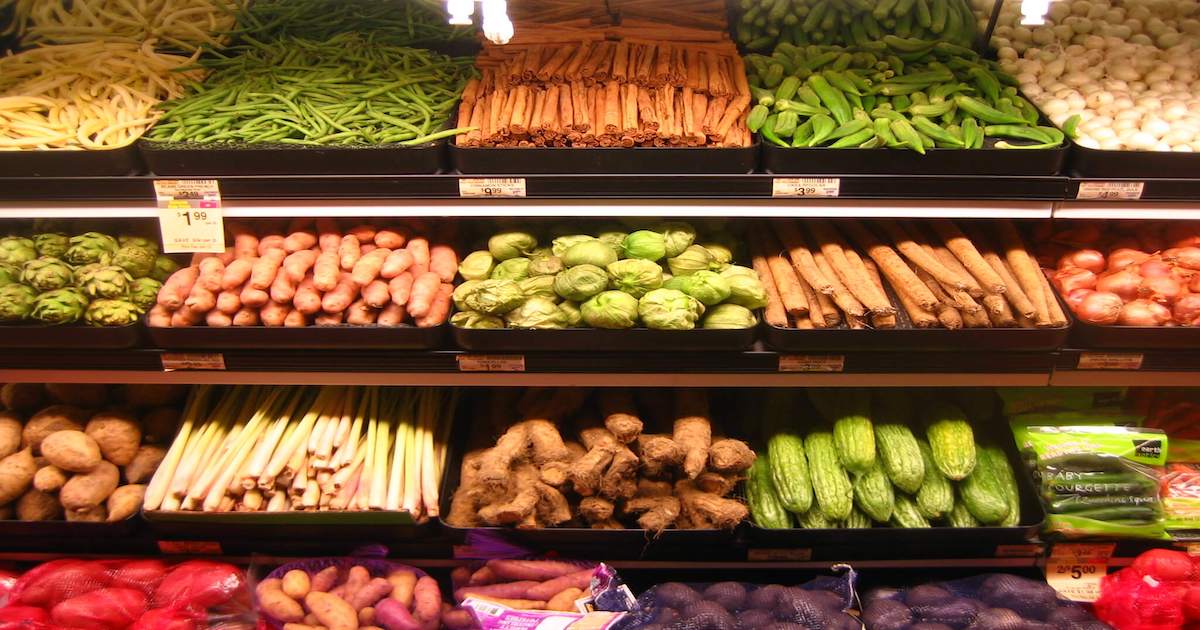 Over the last several decades in the United States, supermarket chains decided to follow white Americans into wealthy suburbs, even as many Black Americans remained in cities. This practice has been called supermarket redlining, echoing the earlier redlining that restricted mortgage lending in predominantly Black neighborhoods. From the 1980s, a “grocery gap” between communities was emerging thanks to this lack of stores. The resulting areas, where access to healthy and affordable food from supermarkets or grocery stores is limited, are often referred to as “food deserts,” but the term has also faced some important criticisms.

What Is a Food Desert?

A food desert is an area where it is hard for people to access fresh, healthy and affordable produce. In the United States, it is typically an urban area marked by socioeconomic disadvantage, resulting from a long history of discriminatory policies against Black families and households.

Researchers first began using the word “desert” in the United Kingdom in the 1970s as a way to describe suburban areas where houses were abundant, but other aspects of community life were not, such as churches, community centers, and shops.

The term “food desert” has been used since the 1990s to describe how hard it is to get nutritious food in neighborhoods where small grocery shops had previously existed, but were now replaced by large supermarkets located farther away. The number of small grocery stores was declining, but the number of large supermarkets was on the rise. This made it more difficult for people living in certain areas to get a variety of fresh and affordable fruits and vegetables.

What Is the Difference Between Food Deserts and Food Swamps?

A food desert refers to an area that lacks access to nutritious foods, meaning that there is no grocery store nearby selling affordable fresh fruits and vegetables. A food swamp refers to an area that has too many food options that are less healthy. Examples of such unhealthy food options include fast-food restaurants like Burger King and McDonald’s, gas station convenience stores, drugstores, and “junk” food vendors that sell mostly sweet and salty, highly processed drinks and snacks.

How Are Food Deserts Identified?

To identify food deserts, researchers look at how far the people in a neighborhood live from a supermarket or grocery store, the income of the families living in the area, as well as other resources like access to transportation.

The U.S. Department of Agriculture stopped using the term “food desert” in 2013, and instead now looks at census tracts that are both low-income and have low supermarket access. Census tracts are measured for both a concentration of “low-income” families and their distance from food stores. The food stores included are supermarkets, supercenters and large grocery stores, while smaller grocery stores, dollar stores, drugstores, military commissaries and warehouse club stores like Costco and Sam’s Club are excluded. Also not counted in the USDA criteria are farmers’ markets, food banks or pantries, and community gardens.

The Food Conservation and Energy Act of 2008 defined food deserts as an area “with limited access to affordable and nutritious food, particularly an area composed of predominantly lower-income neighborhoods and communities.” However, the U.S. Congressional Research Service reported in 2021 that “food desert” is not defined in law, and that some community advocates prefer to use alternative terms to describe the phenomena. The Baltimore City government uses the term Healthy Food Priority Areas (HFPAs). Other terms used to describe inequitable food access include “supermarket redlining,” “food apartheid,” “food swamp,” “food hinterland,” and “food mirage.” Each of these terms signals a different approach to understanding areas with limited access to healthy food, separate from the USDA’s definition.

Why Do Food Deserts Exist?

In the United States, food deserts are a result of efforts to segregate U.S. cities into predominantly Black and predominantly white neighborhoods through federal urban planning and housing policies. The Annie E. Casey Foundation blog identifies four features of food deserts that are summarized below.

In addition to the challenge of living far from a food store, families in so-called food deserts are also less likely to have transport that they can rely on.

While people living in so-called food deserts lack access to affordable fresh produce, they do often have access to highly processed foods that are sold at small convenience food stores and fast-food restaurants.

One reason why supermarkets and grocery stores avoid opening locations in food deserts is fear of losing money, reflecting a history of discrimination against Black people. Supermarket redlining also involves the management of grocery store chains thinking that poorer neighborhoods are “less profitable and more prone to crime.”

Even when healthy food is available at local stores, it can remain inaccessible to low-income families because of the higher expense of maintaining diets rich in vegetables, fruits, fish and nuts.

Where Are Food Deserts Most Common?

Food deserts are most common in predominantly Black neighborhoods, as a result of structural racism entrenched in local, state and federal government practices. There were three states in 2015 where more than a quarter of census tracts were classified as both low-income and low-access: Arkansas, New Mexico and Mississippi.

When the definition of access included whether a household had access to a vehicle, the states where at least a quarter of census tracts were low-income and low-access changed. They were Mississippi, South Carolina, Louisiana, Georgia and Washington, D.C.

Low access to food stores in rural areas, as measured by the USDA Economic Research Service, is defined by the number or share of residents who live more than 10 or 20 miles from the nearest food store. In 2015, 4.6 million people lived in rural census tracts defined as low-income and low-access.

Low access to food stores in urban areas, as measured by the USDA Economic Research Service, is defined as the number or share of residents living more than half a mile or a mile away from a food store. In 2015, 34.7 million people lived in urban census tracts defined as low-income and low-access.

How Many Food Deserts Are There in the U.S.?

Using USDA metrics for low-income and low-access census tracts as a proxy for the concept of a food desert, since roughly one-tenth of the 65,000 census tracts fit the bill. This number varies with the distances used to assess food access. A census tract is a statistical subdivision of a county that usually contains between 1,200 and 8,000 people.

How Many Americans Live in Food Deserts?

The number of people living in food deserts depends on the definition used, and existing estimates are rough due to the challenge in quantitatively measuring access to healthy food. The USDA estimated that in 2019 somewhere between 11 and 27 percent of the population lived in areas where there is a significant concentration of poverty and physical distance from a supermarket. But not everyone living in these tracts will lack access to healthy food, and according to one recent estimate, about 13.5 million people in these tracts would be classified this way.

What Are the Impacts of Food Deserts?

The impact of food deserts can be hard to tell apart from their causes and features, and research findings about food deserts are also conflicting. Despite these contradictions, there are some common concerns related to limited access to healthy and affordable foods.

Studies have considered living in a food desert as a risk factor for having a “suboptimal diet” for older adults with limited independence and mobility. It is popular to think that placing people next to supermarkets means they would have access to the foods in those stores. However, USDA and other academic researchers have reported that the entry of new supermarkets into neighborhoods doesn’t seem to significantly change the healthfulness of residents’ grocery purchases.

Research findings suggest that people who live in food deserts still travel long distances to get to supermarkets. The USDA wrote in a 2020 blog post that high-income households were more likely to demand healthier dietary components than lower-income households. The study also showed that when people moved to an area where “other people eat more or less healthfully,” this type of change in environment did not impact a household’s healthy eating patterns.

Processed foods are considered unhealthy, and their profiles become more obvious in the absence of healthy foods. Smaller grocery stores and drugstores are often full of processed foods—that is, food products with high levels of added sugars, hydrogenated fats and salt, with high overall calorie levels. Supermarkets are a primary source of calories from ultra-processed foods.

In a 2020 study, researchers revealed the impact of a new supermarket in a food desert on the food security, dietary quality and BMI of local participants of the Supplemental Nutritional Assistance Program (SNAP, formerly referred to as “food stamps”). The SNAP participants in the neighborhood with the new supermarket significantly reduced their intake of added sugars, and participants in that neighborhood also experienced a lower daily calorie intake from “a combination of solid fats, alcohol, and added sugars.”

Self-care includes maintaining a healthy diet, being physically active, and for most of us, reducing sodium intake and other behaviors to correct issues with our diet and fitness. Living in a food desert can make such changes harder.

However, despite the enthusiasm for specific policies that would eliminate food deserts, researchers have found that consumers often continue to make unhealthy food choices even when healthier food choices are more widely available. Improving the patterns linked to food deserts may therefore require addressing poverty and increasing consumer education, not just shifting the location of stores.

Adhering to a healthy diet is an important way to manage common chronic diseases such as diabetes. One group of urban food desert researchers found that how residents perceived their “nutrition environments and household food challenges” were significant factors in the quality of their diets. Household food challenges included lower spending per person on groceries, having unhealthy food items in the home in the past week, and lacking a vehicle to allow people in the home to get to the food store. This research lends support to efforts to lower the price of fresh produce for low-income households.

What Are the Possible Solutions For Food Deserts?

Proposed solutions to unequal food access are varied, but some are listed below. These solutions often overlap with initiatives to increase food security, food sovereignty and dismantling systems of oppression.

Educating people about food deserts is something that Black farmers such as Leah Penniman and Karen Washington have done. Rather than describe systemic injustice as a natural phenomenon, Penniman, Washington and others explain that food deserts could better be described with terms like “food apartheid.”

Researchers in 2020 found that the SNAP program, combined with the introduction of a supermarket into a Pittsburgh neighborhood food desert, improved the quality of the diets of SNAP participants. One potential policy solution would be to look at the requirements of food retailers to meet SNAP rules, particularly when those retailers were subsidized to enter neighborhoods that had been identified as lacking access to healthy food.

Outside of supermarkets, urban residents have turned otherwise unused spaces into community gardens and supported the development of farmers markets.

Agrihood is a term used to describe urban agriculture initiatives that unite multiple farms connected to each other for the purpose of feeding people in an urban neighborhood.

If you are unfamiliar with these concepts, you can spend time learning more about racism in the food system and potential solutions to the resulting health and social inequalities experienced by Black, Indigenous and other communities of color. One place to start would be to read more about food deserts at Food Empowerment Project.

Can a Wildlife Refuge Help a Community’s Fight for Environmental Justice?