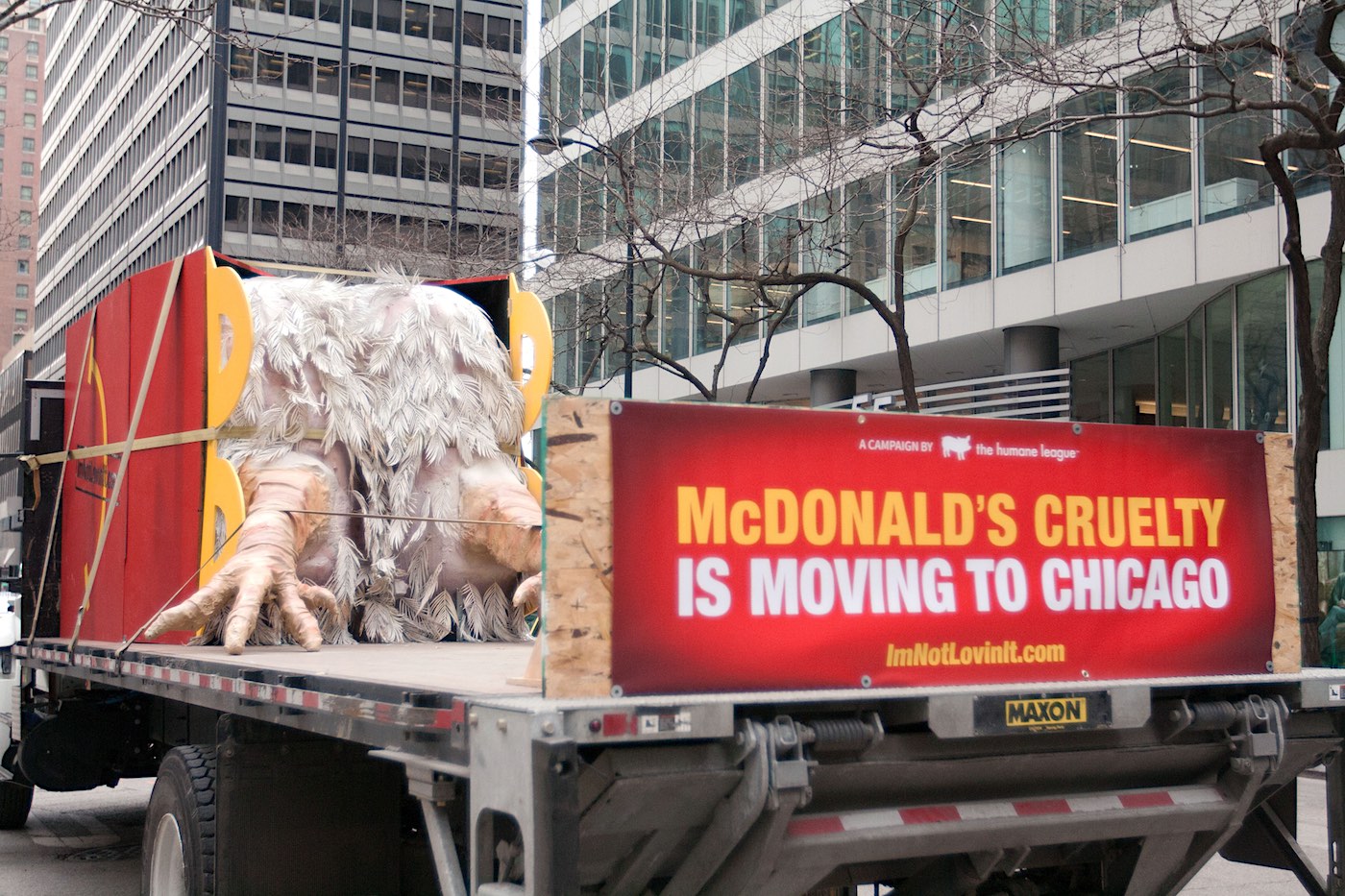 The Ableist Argument Against Veganism

McDonald’s has been called out numerous times for the cruelty that continues to occur within their supply chain, but now they are being called a #McGhoster.

According to The Humane League, a #McGhoster is “a person, group or company who avoids commitment.” A new campaign draws attention to this, and tells McDonald’s that their party is over.

What is wrong with McDonald’s current policies?

McDonald’s has made “promises” of purchasing only sustainable and humanely sourced chicken, but though those claims sound heroic, they are far from reality.

These birds are genetically manipulated to produce large amounts of “meat” in a shorter period of time. This results in the inability to move, risk of disease, broken limbs, and inevitable cruelty.

Conditions are so putrid that chickens suffer from ammonia burns in their eyes and throats from the toxic fumes leached from their own waste that surrounds them.

Their bodies are so overgrown that they are crippled and forcibly anchored to the floor by their own weight. Here, they are often pecked and trampled by their frantic neighbors. Heart disease is also common from this unsustainable and rapid growth, so many chickens die from heart attacks.

If humans grew at a similar rate to that of McDonald’s chickens, we would weigh around 660 pounds at just two years old.

Has McDonald’s tried to address their discouraging policies?

Many of McDonald’s competitors, like Burger King, Subway, and Panera have already adopted meaningful chicken welfare policies within their supply chains, yet McDonald’s continues to fall behind. What is holding them back?

In October of 2017, McDonald’s presented a policy outlining “improvements” it would make within its chicken supply chain, but these promises were underwhelming.

They did not address the lack of space broiler chickens are given, the issues of overgrowing certain breeds to the point of disease, broken bones, and death, and/or decencies like more natural light.

Animal protection groups were far less than pleased with the lack of true reform, but chicken suppliers like Tyson and Cargill commended McDonald’s for their efforts.

Falling Behind the Competition

Under these provisions, companies will transition into breeding birds determined to have better welfare outcomes. This means that they will use birds that grow larger in a more comfortable manner instead of forcing small birds to bear the extra weight of unnatural growth practices.

This change could mean that fewer chickens would have to be raised to produce the same amount of meat as current practices, and would likely decrease the amount of premature death as a result of unsustainable genetic modifications.

These companies promise to provide larger living spaces instead of cramming hundreds of birds into one communal area, as well as create cleaner, brighter, more natural living quarters.

Lastly, the aforementioned companies will improve chicken welfare by implementing a more effective stunning system on the kill line that will, in theory, successfully render the birds completely unconscious before the actual slaughtering process begins — a gruesome fate that far too many McDonald’s chickens have succumbed to in the past due to failed stunning practices.

How can McDonald’s improve?

If McDonald’s wants to stay relevant, it needs to address its uninspiring chicken welfare policies.

Hundreds of restaurants, hotels, and food suppliers have agreed to improve their animal welfare policies in significant ways, but McDonald’s continues to tiptoe around the real atrocities that need to be addressed.

The #McGhoster campaign asks McDonald’s to join its competitors in improving their animal welfare standards.

McDonald’s has a social responsibility to adhere to these standards and truly use their platform to “scale for good” as they promise.

If not now, when?

It is undeniable that animals are suffering, and the campaign calls for responsibility to be taken and changes to be made. Consumers are already asking McDonald’s to improve its unsubstantial chicken welfare policies by signing the campaign petition, which as of writing has close to 20,000 signatures.

You can follow the full campaign and take additional action for the animals at ImNotLovinIt.com.

Be Warned, McDonald’s Investors: The Fast Food Giant Is Slow to Adapt

McDonald’s Is Falling Behind: It Should Embrace Vegan Options