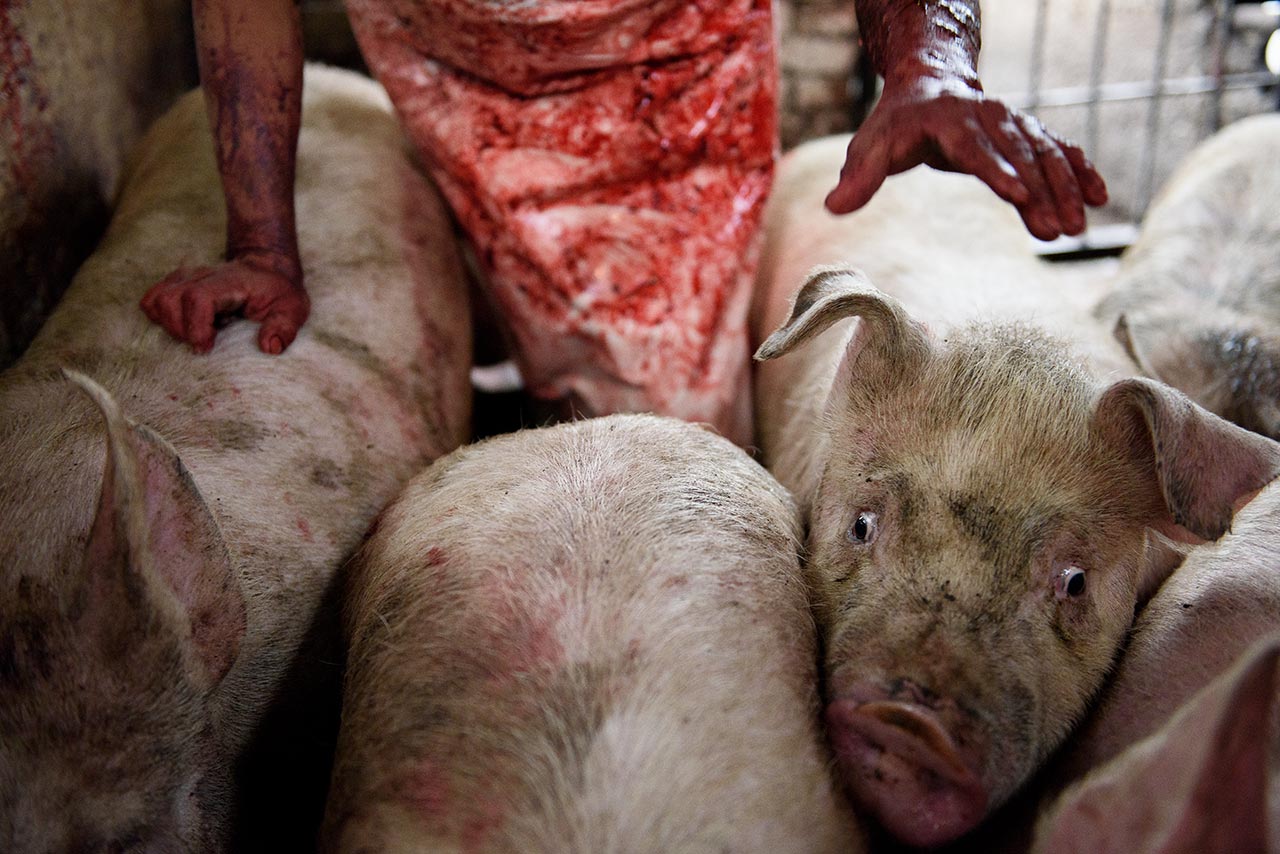 For years, the industry has lead consumers to believe gassing is, in fact, the most humane way to kill pigs, that the pigs are unconscious throughout the process and drift off slowly and painlessly into a never-ending sleep.

But if there’s one thing the industry can be absolutely sure of, it’s that these pigs are not asleep. As you can see here, as the CO2 enters their lungs, the pigs thrash at the sides of the gas chamber and shove their noses through the bars, trying, in vain, to escape.

Now, 69 animal advocacy organizations including Compassion in World Farming, the RSPCA, and L214 are calling for the EU to move away from high concentration CO2 stunning on pigs, a common method of slaughter that is widely known to cause acute pain and severe suffering.

Spain, Germany, and Denmark rank among the top five EU countries for pig production. Together they combine to slaughter over 100 million pigs per year. Somewhere between 85 and 95% of those animals are killed using CO2.

Of the organizations calling for alternative pig stunning methods, 26 are from EU member states. Groups from Switzerland, Serbia, Norway, Australia, and the U.S. have also joined Eurogroup for Animals, an umbrella NGO that urges the EU to adopt higher legal standards for animal protection.

“We firmly believe that the suffering inflicted on millions of pigs due to CO2 stunning cannot be allowed to continue,” said Reineke Hameleers, Director of Eurogroup for Animals. “Research and development resources should be urgently devoted to looking for alternatives that can be widely and quickly adopted.”

For any living being, pig or human, inhaling high concentrations of CO2 is like being burned from the inside out. With each panicked hyperventilation, the pigs draw the toxic fumes deeper into their bodies, simultaneously suffocating from the lack of oxygen and convulsing violently from the abrasive poison being pumped into their lungs.

The majority of large-scale pork producers around the world use the CO2 stunning method, claiming it is more “humane” than stunning animals with an electric prod.

The CO2 stun itself can take up to a minute. Pigs are herded into metal cages and then lowered into gas chambers, where they are gassed for roughly 90 seconds. The pigs cling to the cold metal cage, conscious for anywhere from 15-60 seconds and writhing in agonizing pain.

“The gas acidifies eyes, nostrils, mouths, and lungs,” writes Philip Lymbrey, CEO of Compassion in World Farming in a recent blog post, “meaning the animals feel like they are burning from the inside out.”

Lymbrey explains that even by the textbook definition of “humane,” gassing pigs using high concentrations of CO2 doesn’t cut it. According to the Humane Slaughter Association, “If a stunning method does not cause instantaneous insensibility [until dead], the stunning must be non-aversive (i.e. must not cause fear, pain or other unpleasant feelings) to the animal.”

So why is CO2 stunning still standard practice?

Gassing pigs is still standard practice among the world’s largest pork producers, not because it’s humane, but because it’s more efficient, allowing for faster slaughterhouse operations.

Slaughterhouses first adopted CO2 stunning in an effort to reduce the stress caused by forcing pigs to move one-at-a-time through a single file stall. Gassing them in a group seemed, at first glance, to be less stressful on the animals. From the producer’s perspective, it had the added benefit of speeding up the process.

Exposure to high concentrations of CO2 results in what livestock experts refer to as “floppy pigs,” or pigs with all reflexes eliminated. The floppy pigs are both easier and safer to handle for the person who does the bleeding. But there’s no way to guarantee the animals will stay unconscious.

CO2 stuns are reversible, meaning that at any point during slaughter, the animals may regain consciousness. This can happen for a variety of reasons.

As slaughterhouses increase production, gas chambers frequently become overloaded, leading to less effective stuns. Often, as line speeds increase, the animals are not exposed to the CO2 for long enough and are not fully unconscious.

In high volume slaughterhouses, where pigs are piled on top of each other into the gas chambers, animals are often left in the gas chambers for extended periods after being stunned, putting them at high risk of regaining consciousness.

How can producers prioritize speed and efficiency over animal welfare and call it humane? And why is any stunning method with this likely of not working being used at all?

Gas chambers are one of the pork industry’s best-kept secrets. In 2014, the world got its first look inside a gas chamber at Australia’s largest pig slaughterhouse. The footage incited international outrage and, in turn, inspired a movement. How bad is it? See for yourself.

Since the video’s release, the definition of humane has not changed. For a non-aversive stun to be humane, the animal should not be able to feel it. But for the pigs shown here, and for the millions more killed in gas chambers every day, it’s clear: they can feel it.

The official position of Eurogroup for Animals is that the stunning of pigs with high concentrations of CO2 should be phased out as quickly as possible.

To accelerate this process, Eurogroup for Animals and its member organizations are urging the European Commission to revise the Slaughter Regulation to prohibit the use of high-concentration CO2 as a stunning or killing method for pigs from January 1, 2025, with a review in 2023 to verify the availability of commercially viable non-aversive alternatives.

The group is also calling for investments from the industry and national and EU decision-makers to find a painless alternative to the cruel practice.

“The European Commission, the EU Member States, and the pig industry must invest the necessary funding, energy and commitment to developing one or more alternative stunning methods that either induce instantaneous unconsciousness or, if the process is gradual, are not distressing to the animals,” said Elena Nalon, senior veterinary advisor for farmed animals at Eurogroup for Animals.