121 Million Pigs Are Killed for Food in the U.S. Every Year

The sad truth is the cruel practice of pig farming would not exist without the demand for pig products, which has never been higher.

121 Million Pigs Are Killed for Food in the U.S. Every Year

The sad truth is the cruel practice of pig farming would not exist without the demand for pig products, which has never been higher.

Year after year, factory farms have consistently gotten bigger, cramming more pigs into fewer facilities and maximizing profit with little to no regard for the animals’ well-being.

The sad truth is the cruel practice of pig farming would not exist without the demand for pig products, which has never been higher. The average meat-eating American consumes about 31 pigs in their lifetime. That compares to 10 cows, 71 turkeys, and more than 2,000 chickens.

As of 2007, there were less than 1 million animals on farms of less than 100 animals in size. According to a report from the Sentience Institute released earlier this year, 98.3 percent of pigs in the U.S. live on factory farms. 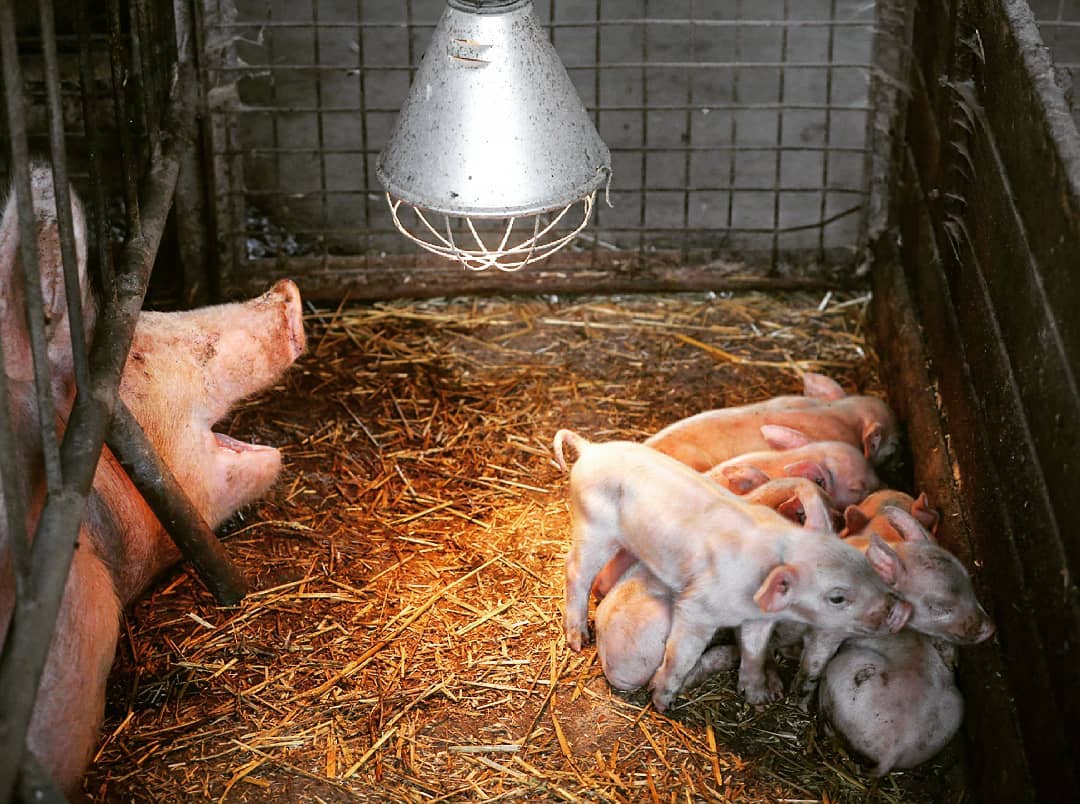 The fact that more pigs are living on bigger farms has only made their lives worse. Despite what farmers promise about the welfare of their animals, the lives of pigs on factory farms are bleak. Before pigs even step off of the truck, they are stripped of the dignity humans so willingly award to cats and dogs, and are labeled a commodity.

During a recent PETA investigation, more than 1,000 mother pigs were found suffering miserable lives in crates at one of British Columbia’s largest pig farms. The PETA investigation spurred direct action by hundreds of activists, who continued to document the cruelty occurring inside the farm.

Footage from the farm shows mother pigs and piglets kept in tiny crates where they are unable to move or care for each other properly. In some cases, piglets may die right in front of their mother’s face, without the mother being able to do anything for her young. The surviving piglets would live among their dead and dying siblings. Injuries such as hernias, lacerations, and growths go untreated and continue to exacerbate the suffering of these animals. Some cannot walk on the slatted floors, unnatural for any animal to live on, and die slowly where they collapse. Dead pigs were found rotting in their pens.

An estimated 121 million pigs are killed for food in the U.S. every year. 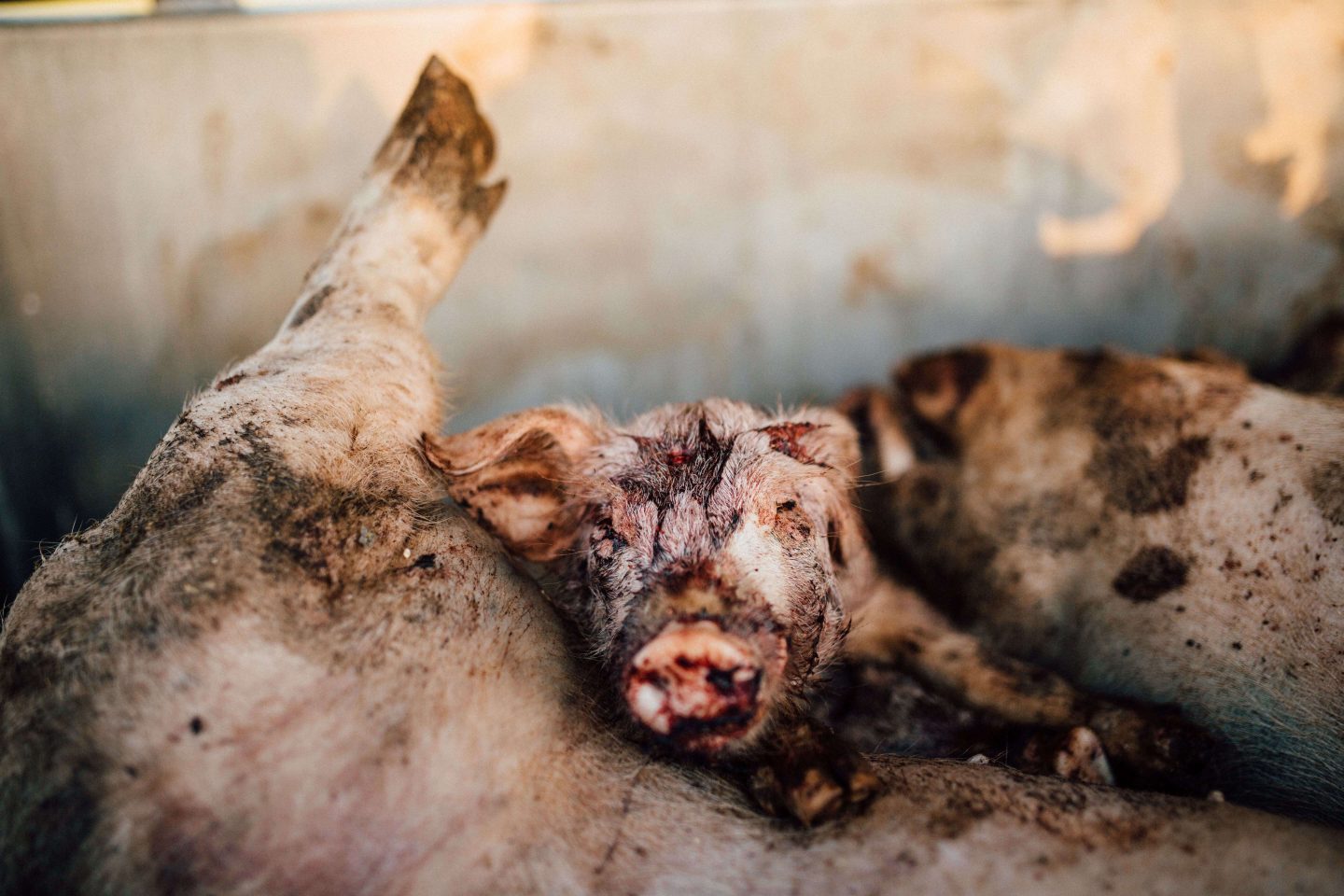 Pigs live a life of absolute suffering on factory farms, far from the natural life they deserve. Around the world, nearly 1.5 billion pigs are killed for food every year. They live their lives in horrible, overcrowded pens as if to hide their incredibly loyal, friendly, and playful personalities from the light of day.

Piglets are separated from their mothers as young as 10 days old. Mother pigs, called sows, give birth without rest or space to turn their bodies around for up to four years before they’re slaughtered. The piglets are then moved to pens where they grow to about 100 pounds. Farmers then move the piglets, called feeder pigs, to corn farming states like Illinois and Indiana, where pigs reach market weight (about 300 pounds). In the back of crowded trucks on the way to slaughter, up to 1 million pigs die every year.

Once pigs reach the slaughterhouse, their suffering intensifies. At one slaughterhouse facility in Australia, workers were found drowning pigs in boiling brown water while they fought for their lives. This video shows countless occasions where pigs are killed in front of other pigs. Blood spits out of their necks while they scream and start convulsing.

Earlier this year, prolific animal rights activist James Aspey traveled to a pig slaughterhouse in Toronto, Canada, where 10,000 animals die every day, to bear witness. In Canada, approximately 21 million pigs have been killed already in 2019.

“Those pigs were dead quiet, which was so eerie,” said Aspey. “I spent quite a bit of time looking at one in the eye who was looking back at me. This beautiful, blue eye looked so human-like. There’s a person in there going through hell.”

The entire industry treats pigs – who are highly intelligent, emotional, and social creatures – as mere objects, units of production. This is evidenced by the horrific lives these animals endure from their birth, right through to their deaths. According to the expert animal researchers at Aussie Farms, when the industry fears sales will drop, it reacts by doing the minimal amount possible to appease consumers while maintaining maximum profits.

“This is your last day,” Aspey said to a pig on its way into the slaughterhouse. “You’ve probably had six months of life that were just horrible. You’re still a little baby, and you’re going to be put in a gas chamber. It’s going to burn you from the inside. You’re going to be terrified.”

Gassing is generally considered the most “humane” way to kill pigs. The pigs are put in gas chambers to “put them to sleep” before they are stabbed in the throat with a long knife. As you can see here, these pigs do not appear to be asleep – or anywhere close to asleep, for that matter. They thrash violently at the sides of the gas chamber, shove their noses through the bars, and try, in vain, to escape.

“If that’s the most humane method,” said Aspey, “maybe we shouldn’t be doing any methods.”