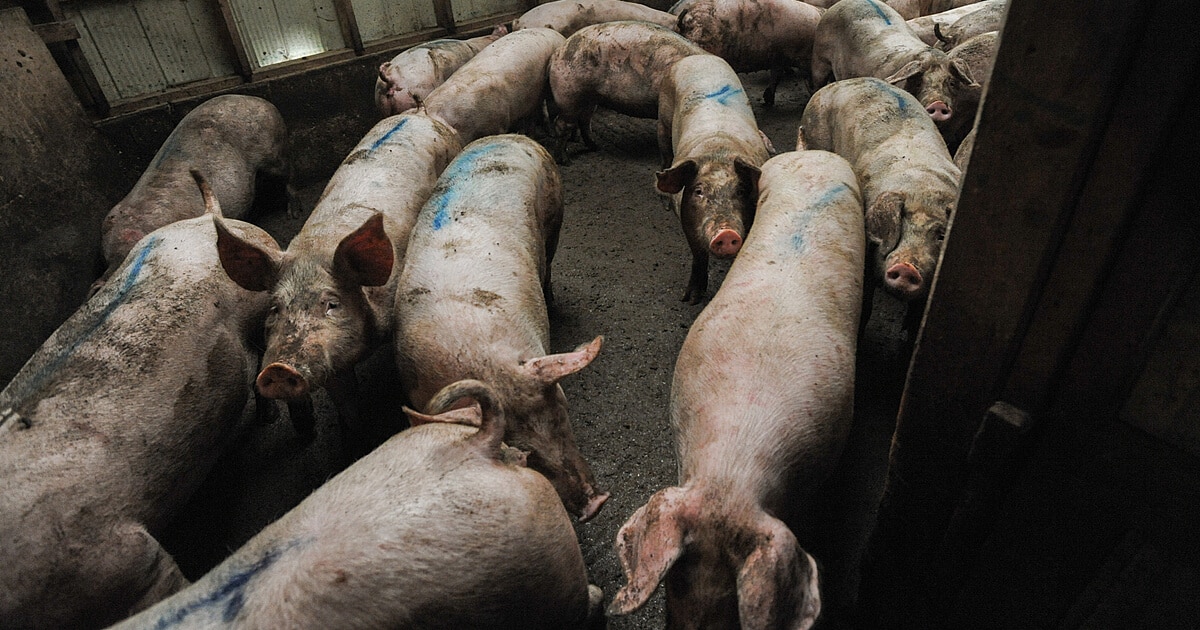 Every second the counter ticks and several hundred more animals have lost their lives. The Animal Kill Clock serves as an eerie reminder of the lives and possibilities that are lost with every moment that passes. All around the world animals are dying in order to feed people. The numbers are staggering — with over 55 billion animals being killed every year in the United States alone, according to the clock.

How Many Animals Are Slaughtered in the U.S.?

In 2015, it was estimated that the average animal-eating U.S. citizen would consume 7,000 animals during their lifetime. This equated to 11 cows, 27 pigs, 2,400 chickens, 80 turkeys, 30 sheep and 4,500 fish. So far this year about 50 billion animals have been slaughtered according to the Animal Kill Clock in order to feed the human appetite for animal flesh in the United States. The kill clock uses data from the U.S. Department of Agriculture and estimates that chickens account for over 8 billion of those deaths, turkeys 214 million, cattle 36 million, pigs 124 million, ducks 23 million, sheep 7 million, fish almost 4 billion and shellfish 43 billion.

How Many Animals Are Slaughtered Each Year?

The United States Department of Agriculture (USDA) has estimated that in 2020, over 165 million land animals were slaughtered in the country, not counting chicken. The number of fish and shellfish killed to meet U.S. demand is unknown as their lives are measured only in weight. However, by including the best estimates of the number of sea animals that are killed as part of the U.S. food supply chain, the number of total killed annually jumps to 55 billion.

How Many Animals Are Killed Each Day?

Approximately 23.3 million land animals are killed in the United States every single day according to the U.S. Animal Kill Clock, which also reports that when including shellfish and other sea life, the number jumps to over 150 million. The steep incline is due to the heavy use of sea life to feed other production fish, as many species of popular fish, such as salmon, are carnivorous and are fed smaller fish and fish oil.

How Many Animals Are Killed Every Second?

With every second, according to the United States Animal Kill Clock, 271 land animals are killed in the U.S. food supply chain. This number jumps by an order of magnitude —to 1,758 animals slaughtered for consumption every second — when fish and other aquatic life are included.

Of all farmed animals, chickens endure some of the worst suffering at the greatest scale in order to feed people in every corner of the globe. Over 72 billion chickens around the world were slaughtered so their bodies could be consumed in 2019. This equates to over 197 million chickens being slaughtered on just one day that same year. Often these birds have been bred over generations to grow at such an alarming rate that they are killed as young as eight weeks old. This swift growth means that they often fall victim to their own body size and are unable to walk normally or even stand due to their body’s inability to support its own weight.

According to figures from the FAO for 2019, over 3.3 billion ducks were slaughtered worldwide (9 million a day). Recent trends have shown that duck slaughter in certain geographic areas is increasing. For example, in 2013, 91.1 percent of all ducks were killed in Asia. The same data shows that from 2000 to 2013, the amount of duck meat produced by China rose from 1.8 million tonnes to 2.9 million tonnes, an increase of over 50 percent. China was not alone in increasing its production of ducks. The data also shows that Myanmar had an 11 percent increase in duck production during the same period, starting at 29,000 tonnes in 2000 and ending in 2013 with production reaching 107,000 tonnes. In the United States, 27.5 million ducks were slaughtered for food in 2019. These ducks are predominantly raised on large-scale farms without access to water for swimming or the outdoors.

Estimating the number of fish killed every day for food is especially difficult, as they are most commonly counted by weight instead of as individuals. We know that over 82 million tons of fish and other marine life were produced globally from aquaculture in 2019. This equates to roughly 224,000 tons of fish being produced every single day that year. Estimates of the number of individual farmed fish slaughtered for food globally in 2017 range from 51 billion to 167 billion. This means that anywhere from 140 million on the conservative end to 457 million individual fish raised on fish farms were killed for food each day.

In order to produce foie gras, meat and down for pillows and blankets, 700 million geese and guinea fowl were slaughtered around the world in 2019, according to the FAO. This equates to almost 2 million geese and guinea fowl a day. Many of these geese are confined in minuscule cages preventing them from moving around or expending energy and have a tube shoved down their throat so that they can be force-fed a mixture of grains, fat and compressed air to enlarge their livers so they can be served as the delicacy foie gras.

In 2019, over 500 million goats were slaughtered for food. When broken down this means that over 1.3 million goats were slaughtered around the world every day in 2016. Faunalytics, a research organization, found that the three countries that slaughtered the most goats in 2016 were China (163,247,168), India (50,519,315) and Bangladesh (29,812,862). The same analysis revealed that the continents that slaughter the most goats are Asia and Africa, both of which have increased the number of goats being killed since data began being collected in 1960.

Pigs are the third most commonly slaughtered animal for food in the world following chickens and fish. In 2019, there were roughly 1.3 billion pigs slaughtered for food globally. This means that approximately 3.5 million pigs were slaughtered every single day that year. Faunalytics analysis of FAO slaughter data from 2016 data revealed that China (715,374,588), the United States (118,303,900) and Germany (59,480,468) slaughtered the most individual pigs for food that year, but when population size is accounted for Denmark led the pack — with 3.2 pigs slaughtered for every citizen.

In 2019, 630 million rabbits were slaughtered for meat worldwide. This equates to just under 1.7 million rabbits being killed every day. In the European Union, rabbits are the second most farmed species. They are especially popular in Italy, France, and Spain. The EU accounts for 28 percent of global rabbit meat production.

In 2019, 602 million sheep were slaughtered for food around the world. This means that roughly 1.5 million sheep were killed every day in 2016. Analysis revealed that the sheep slaughtered in China represented 26.2 percent of the total, the largest share of any one country. When population size is accounted for, however, the country that slaughtered the most sheep was the Falkland Islands, which killed 14.2 sheep per person in 2016.

In the United States, 224 million turkeys were slaughtered in 2020. Of these, an unbelievable 46 million are killed to be eaten on just one day—Thanksgiving. Globally in 2019, 630 million turkeys were slaughtered according to the FAO. The majority of these birds spend their short lives on factory farms, confined in small spaces with little room to stretch their wings or explore, and with limited access to natural light and the outdoors.

The number of wild fish killed by the food supply chain is hard to estimate due to both bycatch—or animals that are caught alongside the targeted species, and the massive number of fish that are used as feeder fish for other fish species. However, broad estimates suggest that between 790 and 2,300 billion fish were caught from the wild to feed people around the world every year from 2007 to 2016. This means that a low-end estimate would suggest 2.1 billion fish are caught from the wild and killed every single day around the world.

What Is Industrial Agriculture and What Role Does It Play?

Industrial agriculture was born out of a desire to maximize food production while minimizing cost. This method of farming has led to the creation of factory farms on which millions of animals suffer in small enclosures and endure inhumane treatment prior to being slaughtered. Industrial agriculture has also encouraged the breeding of animals for efficiency over welfare, resulting in pigs giving birth to litters too large for them to nurse and chickens that grow too fast to walk normally.

What Is Bycatch? And Why Are We Catching So Much of It?

Bycatch occurs when fishing vessels catch marine life in their nets other than the species they were targeting. It often results in these non-targeted species being thrown back into the water where they die from injuries sustained from the experience. Estimates suggest that 63 billion pounds of bycatch are caught every year around the world. The reason that so many untargeted animals are being caught is that fishermen prioritize efficiency and economy over animal welfare, and employ methods of fishing, such as using gillnets, that don’t discriminate between species. Instead, they collect everything in the net’s path.

There Is No Such Thing as Humane Slaughter

The agricultural industry spends large amounts of time and money attempting to convince the public that the way their products are produced in a way that reduces or even eliminates the suffering of animals. They attempt to do this through clever marketing tactics such as humane washing and the use of particular wording or labels such as “free-range” and “grass-fed.” The reality, however, is that there is no such thing as humane slaughter. To be truly humane the practice would have to cause no harm to the animal, and because slaughter is ending life and the possibility of future positive experiences for that individual, it can never be performed humanely.

Be Part of the Solution

Billions of animals are killed every year for food. Choosing to replace the meat on our plates with delicious plant-based protein is one of the most impactful steps we can take toward reducing and eventually eliminating this unnecessary suffering.

This article was originally published December 17, 2021. It has been updated to include an original Sentient Media video.