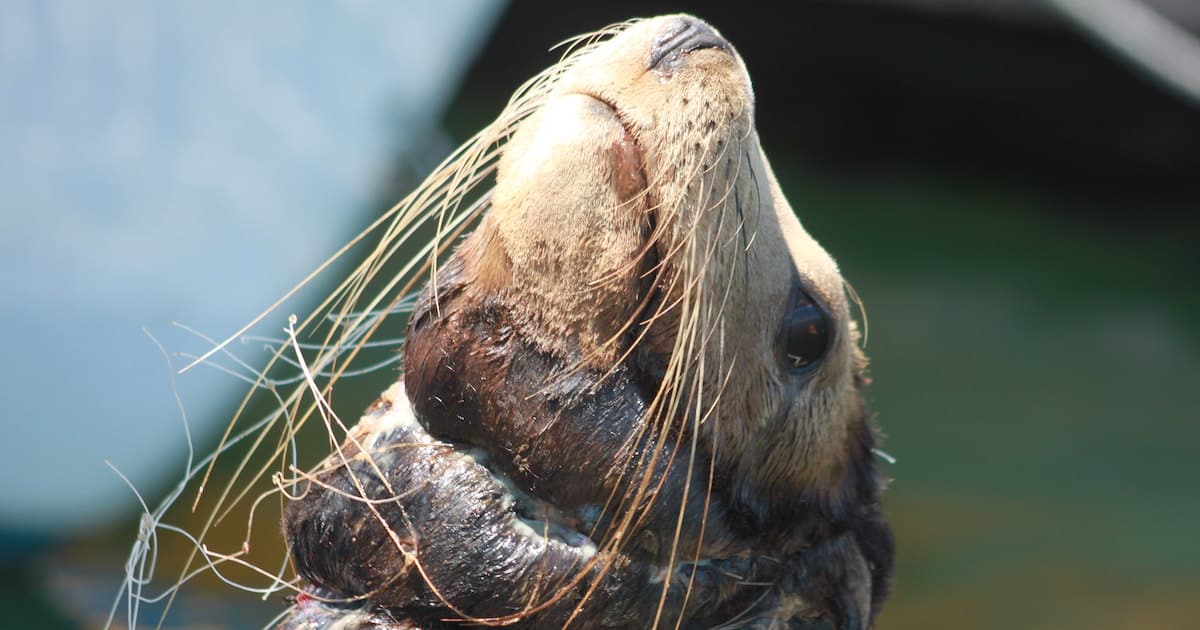 Bycatch is a component of most commercial fishing operations. It is created when marine life is unintentionally caught by fishing vessels. Fish and other unwanted aquatic animals are then tossed back into the ocean. Many are either dead or dying when they are thrown back. This article will explore what bycatch is, why it happens, and what measures can be taken to reduce or eliminate it.

Bycatch occurs when nontarget species of marine life are captured in fishing nets or on hooks. Bycatch can include a range of different animals, from fish to seabirds and even whales.

Bycatch causes serious physical harm and often death in marine life. Often, when fish or other aquatic animals are brought up to the surface by fishing gear, the rapid change in water pressure causes their internal organs to rupture, which can be lethal. Other times, nontarget species are brought onto the decks of fishing vessels and tossed back into the water so injured that they die shortly afterward.

Why Does Bycatch Occur?

Bycatch occurs because commercial fishing prioritizes economic gains over concerns for animal wellbeing or ecosystem health. Fishing vessels and the gear they employ can be designed to capture the greatest amount of fish possible, using methods like trawling or longlining. More discerning fishing methods, such as pole and line fishing in which one fish at a time is hooked, are generally not used by commercial fishing vessels because they are expensive and time-consuming.

Modifications to net technology are sometimes implemented to reduce bycatch. For example, some fisheries have developed trawling nets that allow turtles to escape. These nets prevent some of the damage that is sometimes associated with bycatch. Nonetheless, more destructive fishing methods are incentivized by the industry. Since consumers demand cheap seafood, commercial fisheries aim to produce the greatest volume of fish at the most competitive price.

While much of the world’s bycatch occurs accidentally, in some cases nontarget species are intentionally caught. Dolphin bycatch is common within tuna fisheries and has been perhaps the most publicly visible of all bycatch issues after undercover footage of dolphins being killed in driftnets was made public in the 1980s. The incident resulted in what is now called the Dolphin Safe labeling system. These labels are tied to programs intended to cut down on bycatch of dolphins, who travel with schools of tuna in the Eastern Tropical Pacific ocean. This partnership is exploited as tuna vessels intentionally encircle the more easily-visible pods of dolphins, assuming (often correctly) that tuna will be swimming below.

While workers in the fishing industry are supposed to release any dolphins captured in their nets, they cannot always accomplish this before the dolphins drown. It is often easier and more cost-effective to simply allow the dolphins to drown or die from their injuries.

Which Fishing Methods Have the Most Bycatch?

In terms of bycatch, not all fishing methods are created equal. Some nets are designed to scoop up as many aquatic animals as possible, lacking discrimination. Industrial-scale operations also produce far greater volumes of bycatch as opposed to subsistence fishing. Below are a few examples of fishing methods that create the most bycatch.

Gillnet fisheries deploy large nets that hang vertically in the water, weighted at the bottom, and equipped with floating buoys to keep them from sinking. While gillnets are designed with different mesh sizes, each of which is meant to capture certain species, such as salmon, tuna, or swordfish. However, non-target species often become entangled, earning gillnets the nickname “walls of death.” Aquatic animals such as sharks, seals, turtles, and dolphins drown after becoming entangled in gillnets, while fish often starve to death. One study found that in the Baltic and North Sea regions alone, gillnets were responsible for the deaths of around 200,000 water birds each year. Gillnet fisheries have also pushed the vaquita porpoise to the brink of extinction.

Longlines consist of a series of baited hooks, connected by a main line that runs along the surface of the water. Designed to catch species like mahi-mahi and swordfish, the bait attracts other animals who often become hooked. Many species of sharks are unintentionally caught. The populations of certain sharks, including dusky, night, and scalloped hammerhead sharks are often negatively impacted after being caught even if the sharks are released from longline hooks while they are still alive. Seabirds also account for a significant proportion of longline bycatch, with an estimated 320,000 birds killed annually around the world.

Purse seine nets get their name from the drawstring-like bottoms of the nets. They are drawn closed after encircling a school of fish, such as tuna, essentially sealing off their escape. Purse seining is often used in tuna fisheries in the Eastern Tropical Pacific, where vessels drop nets on pods of dolphins hoping to capture the tuna swimming underneath. Purse seining is also used in conjunction with fish aggregating devices, or FADs for short. FADs are plastic devices left to float in the ocean until fish begin congregating beneath. Nets are then set around the FAD, and everything is drawn into the net. FAD fishing often results in bycatch of larger species including sharks and sometimes even whales.

Trawl fishing nets are massive, some stretching 650 feet across, resulting in a huge amount of bycatch. Bottom-trawling nets are dragged across the seafloor, turning habitats into sparse, jagged landscapes that resemble clear-cut forests. Corals are often cut down by trawlers and scooped into nets. One estimate suggests that in the North Pacific Ocean, 40 tonnes of coral are caught as bycatch every year. Because most species of corals are slow-growing, their ecosystems take a long time to recover from a single pass of a trawl.

Can Fishermen Use or Sell Bycatch?

The decision of whether to use or sell bycatch depends on a few factors including:

Pelagic sharks are one example of a species that is often caught as bycatch, particularly in longline fisheries, and harvested for their valuable fins. One study found that, at one time, nearly 50 percent of shark fins came from bycatch.

Why Is Bycatch a Problem?

Bycatch is a global problem. Fishing activities that take place in one area often create problems in adjacent marine ecosystems. Sometimes, they even affect terrestrial systems. Beyond the environmental implications, there are also ethical questions. Below is a brief discussion on why bycatch is a problem.

The Effects of Bycatch

Removing significant proportions of any species risks upsetting their balance in marine ecosystems. Apex predators can play a significant role in a healthy ecosystem, and these species are frequently victims of bycatch. Sharks and dolphins often sit at the top of their respective food chains, helping maintain an ecosystem-wide equilibrium. That balance is upset when predators are removed at high rates. The disturbances caused by apex predator bycatch often cause reverberations throughout the food web and can even bleed into surrounding ecosystems.

Removing smaller fish and organisms lower down on the food chain also carries repercussions. Large amounts of bycatch can affect the availability of food for larger species, causing imbalances and affecting the reproduction rates of predator populations.

Bycatch statistics aren’t always reliable because monitoring fishing vessels is notoriously difficult. However, some conservatives estimates help give us an idea of the level of bycatch at fisheries around the world.

One study looked at bycatch records from 95 fisheries in the United States between the years 2010 and 2015, finding a total estimated volume of bycatch of nearly 5 billion pounds and accounted for a discard rate of about 10 percent. Another study found that between 17 and 22 percent of the wild fish caught in the U.S. is bycatch.

According to other estimates, the global bycatch percentage accounts for 40 percent of the world’s total catch, amounting to 63 billion pounds per year.

The question of whether bycatch is sustainable is one that will be answered differently depending on who you ask and whose interests they represent.

Seafood labeling organizations, such as the Marine Stewardship Council (MSC), admit that in some cases bycatch is unavoidable, but go on to say that fisheries can still be considered sustainable as long as they minimize bycatch as much as possible. Because MSC’s funding comes, in part, from seafood companies who pay to use the organization’s sustainable label on their products, what MSC considers sustainable might be different, for example, from an organization that advocates for plant-based diets. Some argue that there is no such thing as sustainable seafood, given the increasing demand for fish and other seafood products.

The only thing that seems clear is that, as long as commercial fisheries exist, so will bycatch.

How To Prevent Bycatch?

Besides reducing the demand for seafood, there are several ways to prevent bycatch with varying degrees of success. In the U.S., the National Oceanic and Atmospheric Administration (NOAA) recently published a framework for reducing bycatch. The agency points to its bycatch provisions in three pieces of legislation—the Endangered Species Act, Marine Mammal Protection Act, and the Magnuson-Stevens Act—all of which aim to curb bycatch levels. NOAA also urges academics, environmental organizations, and fisheries to monitor and more accurately report and reduce the nation’s bycatch numbers.

Despite these efforts, preventing bycatch remains a stubborn, complex, and difficult problem to solve. New fishing technologies and methods that reduce bycatch will to towards a future fishing industry that produces much less bycatch. But the most effective solution is for commercial fleets to stop fishing altogether.

Bycatch happens because the commercial fishing industry places profit above welfare and environmental concerns. Driven largely by consumer demand, the amount of bycatch remains high around the world. Strategies to minimize or eliminate bycatch should be the focus of sustainability organizations, consumers, and regulatory agencies worldwide.