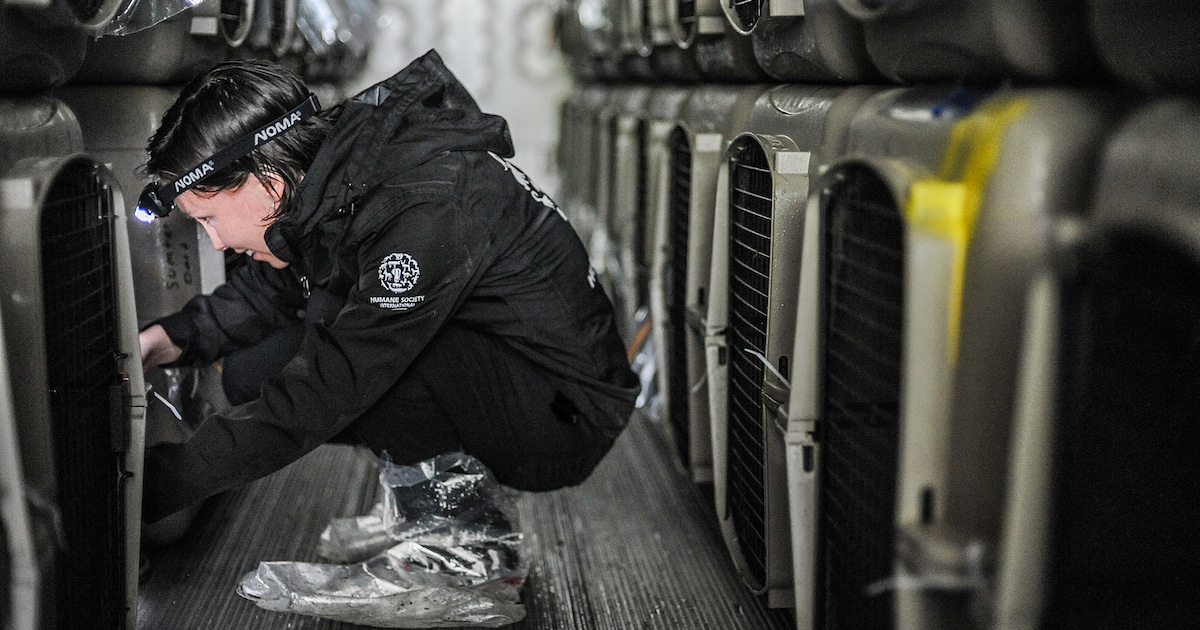 Towards a Plant-Based Future: An Interview With Mark Pearson and Emma Hurst

When people are looking for animal companionship, purchasing a pet online from a breeder or a pet store can be an accessible (but pricey) place to find a furry friend. They may not realize that municipal animal shelters have much more affordable options for adopting a pet. The process of adopting pets who have been rescued, or purchasing them from a reputable breeder can be invasive and depend on the subjective opinions of the pet vendor or adopting agency, often favoring middle-class, richer, white households. People may also be looking to get a specific breed of dog, perhaps because they are allergic to pet dander. However, because the United States Department of Agriculture (USDA) standards for licensing dog breeders are minimal and poorly enforced, consumers can easily be misled and support breeders who focus on making money at the expense of the welfare of the animals they are caging.

The problem with puppy mills is that they provide a reliable source of income for dog farmers in an industry that is highly unregulated and that can also be highly profitable. With an initial investment of a couple of hundred dollars “for a few breeding pairs, you could be selling puppies for a thousand dollars or more a piece,” yielding “tens of thousands of dollars within a couple of years,” said Sarah Speed of The Humane Society of Pennsylvania in the documentary “Dog by Dog.”

The cruelty of puppy mills also overlaps with the wider problems of animal agriculture. In 2015, the “Dog by Dog” filmmakers found that many puppy mills were USDA-subsidized agricultural producers, for commodities such as dairy, as well as USDA-licensed dog breeding facilities. That puppy mill owners prioritize profit over animal health is typical of practices in the animal agriculture industry.

What Is a Puppy Mill?

The Humane Society of the United States defines a puppy mill as a “dog breeding operation, offering dogs for monetary compensation, in which the physical, psychological and/or behavioral needs of all or some of the dogs are not being consistently fulfilled due to inadequate housing, shelter, staffing, nutrition, socialization, sanitation, exercise, veterinary care and/or inappropriate breeding.” Another definition of a puppy mill is “any dog breeding facility that keeps so many dogs that the needs of the breeding dogs and puppies are not met sufficiently to provide a reasonably decent quality of life for all of the animals.”

Someone who operates a puppy mill is unlikely to say that it’s a business that has forsaken the health of the dogs in its care, and might instead use terms like “commercial breeding establishment,” “high-volume breeder,” “large-scale breeding facility” or “professional kennel” to describe what they do.

Yes, puppy mills still exist—about 10,000 in the United States, generating about 2 million puppies per year. The Humane Society of the United States has published a report on a  sampling of 100 known puppy mills annually since 2013. Researchers at Bailing Out Benji have identified a national pattern of states where USDA licensed pet breeders are concentrated, called the Puppy Mill Belt. The Puppy Mill Belt stretches north from Texas through much of the midwestern U.S., ending in a panhandle made of Indiana, Ohio, and Pennsylvania.

Why Are Puppy Mills Still Legal?

One reason why puppy mills are still legal in the U.S. is that the Animal Welfare Act (AWA), the federal law that regulates pet breeding, is outdated and weak or nonexistent on the topic of pet breeders. In fact, the AWA exempts the USDA from having to inspect breeders and pet stores selling animals directly to the public—annual inspections are only required for research facilities. While the USDA has the discretion to inspect all facilities that are licensed or registered with them, the AWA does not require commercial dog breeders to provide dogs with yearly vet checkups, access to exercise, socialization, or protections against extreme heat or cold, and it allows both wire flooring and stackable cages. USDA regulations only require living spaces six inches bigger than the dog itself.

Efforts to pass legislation to protect dog welfare in breeding facilities are popular, but have been opposed by businesses and industrial agriculture interest groups. Agribusiness lobbyists reacted to proposed animal welfare progress on pet breeding as direct threats to how meat is produced for human consumption. Thus one reason why puppy mills remain legal is the low status of nonhuman animals throughout U.S. society, and the power wielded by those who exploit them.

States and local entities have tried to create alternative protections, with mixed results. In Pennsylvania, for example, after a pro-animal welfare Dog Law Program was introduced in 2008, the state auditor found several years later that it was not being enforced properly, which prompted the department to change the staff in charge of running the program. In Missouri, a 2010 statewide proposition to protect dogs in commercial breeding facilities passed by 51 percent of voters, despite being opposed by a coalition of agricultural groups funded by corporate giants such as Monsanto, Tyson, Cargill, and Smithfield, via the Missouri Farm Bureau, Missouri Pork Producers, and the Missouri Soybean Association. Repealing the proposition became an immediate target of state legislators. Five months later, agribusiness-aligned legislators successfully removed requirements on cage and living conditions and a limit on owning more than 50 breeding dogs.

As for private industry standards, American Kennel Club (AKC) inspection records are not public. In 2011, only nine inspectors across the U.S. were employed by the AKC to enforce its certification program for humane dog breeding standards. The group opposes legislation for basic minimum protection standards of care for dogs—whether that’s requiring vet visits, outlawing crate-stacking, confinement for 14 hours at a time, or leaving an animal in a vehicle in excessively hot or cold weather. Pet stores often boast that the animals they sell are AKC-registered, but that “has nothing to do with the humaneness [of their breeding practices] or the quality of the dog. It only means who the mother and the father is [sic],” as Bob Baker of the Missouri Alliance for Animal Legislation explains in “Dog by Dog.”

What Happens to Puppies in Puppy Mills?

There are at least two ways in which puppy mills harm dogs: physical and mental. Common physical ailments include skin and dental diseases, including matted hair and rotten jawbones. Matted hair can glue limbs together and even prevent dogs from completing bowel movements. Dogs rescued from puppy mills were more than twice as likely as other pet dogs to exhibit a fear of unfamiliar people in an animal welfare study of more than 1,000 caretakers with companion dogs. Puppy mill dogs were also more likely to be afraid of other dogs and of other nonsocial stimuli like bikes and noises.

Similar to the concept of concentrated animal feeding operations (CAFOs) in the world of factory farming, dogs are farmed in the United States—not for slaughter, but to make babies that will become companions to humans. The dogs are usually permanently caged in barns or outside in groups with other dogs, with little to no veterinary care or interaction with humans. Typically, the cages are filthy and crammed with dogs, “with no room to run or play.” Dogs live in wire mesh cages with wire mesh floors. The cages are often stacked on top of each other.

What Do Puppy Mills Do With Unsold Puppies?

Puppy mills can contact local rescue shelters, who in turn can rehabilitate and adopt out the puppies to the general public. In “Dog by Dog,” Pittsburgh-based animal rescue volunteer Joe Lackey explains: “A lot of people think when you say you rescue dogs from puppy mills, they think we went and kicked the barn down and took the dogs. But that’s not what we did, because mills are legal, and I think a lot of people don’t understand that. These puppy mills are legal. They’re allowed. So I explain to them how, you know, we wait for the Amish [puppy mill] to contact [us]. […] Then we set up a day when we can go get the dogs, […] we’ll go to their property.”

Lackey’s experience is that rescued puppy mill dogs that have been locked up for six or seven years in a cage outside with little protection from the elements still manage to seek out affection from humans. Yet sadly, unsold male dogs are often “killed or left to die,” as are mother dogs that give birth repeatedly until their bodies are worn out, according to a Humane Society International factsheet that details the characteristics of puppy mills.

How to Stop Puppy Mills

One way to counteract puppy mills is to support advocacy organizations that are pushing legislative solutions to strengthen the Animal Welfare Act. Advocates have also pushed the USDA to pass its own rules, especially when legislative efforts were failing. In turn, the USDA can take steps to work with puppy mills to improve their operations.

Supporting puppy-friendly stores is another way you can change trends in your area. The Humane Society of the United States’ website offers marketing assistance to businesses that pledge to stop selling puppy mill-supplied puppies and instead host events or conduct adoption for rescue animals.

The story of puppy mills is one of suffering dogs raised in extremely unsanitary and unhealthy confinement akin to the conditions in which chickens are raised at industrial farms. Yet this story is also about how advocates are pinpointing legislative and administrative fixes, rescuing and rehabilitating puppy mill dogs, and letting the public know about the pitfalls of purchasing dogs from breeders, retail stores, and websites.

This Kansas Farm Is Making Headlines—for All the Wrong Reasons