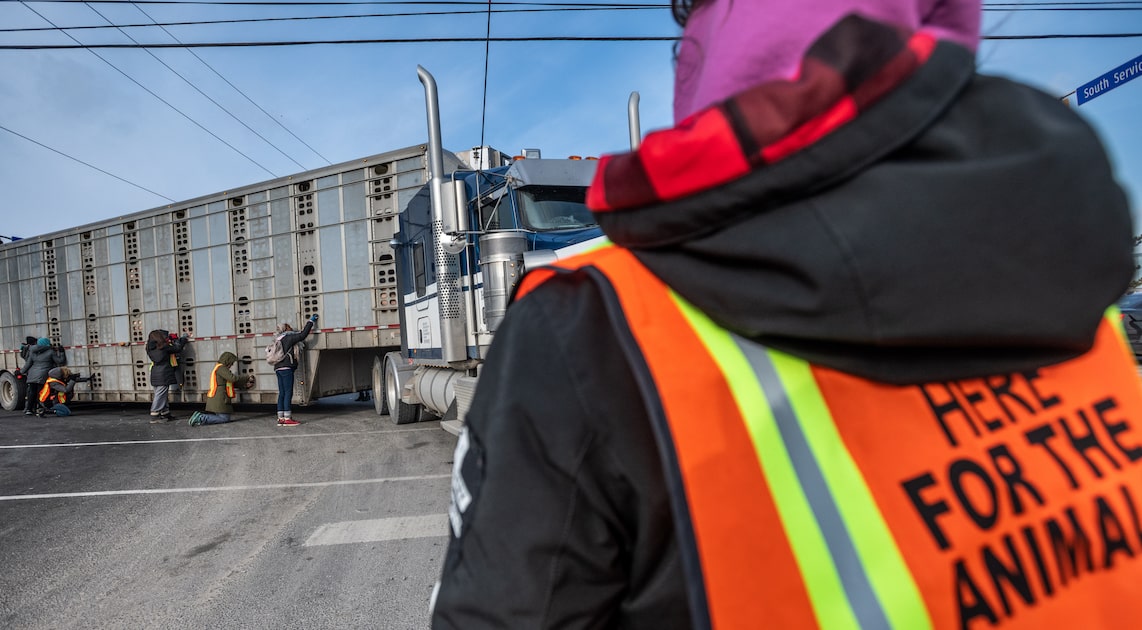 There is one especially important, unwritten but well-known rule among animal rescuers. It’s a rule that applies not to animals that fit within the parameters of “pet,” but rather to those categorized by many as property or a threat. And it’s a rule not known by the general public. For rescuers of farmed or wild animals, injured or displaced, that rule is: don’t ever call the cops.

This past summer, I received a call about an illegal backyard chicken running loose in a suburban neighborhood. I immediately knew who to call for help, and it certainly wasn’t the local authorities. Instead, I called “the chicken whisperer,” Janine, who is widely known in our local vegan community for being the specialist when it comes to catching, homing, and caring for runaway chickens. She was there within the hour, and today Pumpkin the chicken is living life being loved and cared for at an animal sanctuary. This knowledge of who to call isn’t common. But it’s something animal advocates know, and it comes with experience.

In 2016, outside the now-infamous Fearman’s slaughterhouse in Burlington Ontario–where activist Regan Russell was killed four years later–a truck carrying pigs rolled over. Injured pigs were trapped inside the truck, and loose pigs were trying to escape. “It was an awful, awful scene,” recalls activist Jenny McQueen, who rushed there that day. “The police were already there when I arrived. And you had staff workers from the office areas, like women in high heels, trying to herd pigs into the slaughterhouse.” Steve Jenkins, co-founder of Happily Ever Esther Sanctuary, was also there that day. The activists pleaded for the release of injured pigs, but McQueen says, “They refused.” The injured pigs were instead shot in front of activists by slaughterhouse staff, while the police worked to keep the activists back.

“The police are there to protect the property of the company,” McQueen explains. That property, by definition of the law, is the animals. And protecting them meant ensuring they made it to slaughter.

“The police were on the scene not to assist the animals,” says Canadian animal rights lawyer and executive director of Animal Justice, Camille Labchuk, “but to ensure activists didn’t get anywhere near where the pigs were suffering and dying.” More often than not, she says, “We see the police acting as property right enforcers.” Recent ag-gag legislation enacted in Ontario offers stark evidence of that.

“Every single authority you can imagine failed in that situation,” says Labchuk, who also includes the Canadian Food Inspection Agency and the Ontario Society for the Protection of Animals in that list of policing bodies. When all was said and done, Labchuk’s point was proven. The only person arrested that day was an activist, who got too close to the animals. The truck driver received a mere traffic ticket.

McQueen says if she were to come across a livestock truck rollover today, or any situation with a farmed or wild animal in need, her first call would be not to authorities, but rather to someone in the local animal rescue community. “Because if any animal is injured, it is likely that the authorities would shoot to kill.”

Labchuk agrees. “I would hesitate very much to call any of the existing enforcement agencies because I suspect their first response would be the simplest way out, which might be to kill the animal. I would be more likely to call a rescue organization or a sanctuary.”

Regarding injured or displaced wildlife, Labchuk says she would never call conservation authorities. “Never in a million years. Conservation officers exist to protect the property interests of wildlife killers. They exist to protect hunters and trappers. They are not concerned with the individual welfare of wild animals, and frankly, neither is the legislation.”

“Reports of injured wildlife should be handled by a qualified wildlife rehabber,” says Lesley Fox, with Canadian wildlife advocacy group The Fur Bearers. She believes mistrust and skepticism exist between wildlife advocates and law enforcement, in part because historically, animals have very seldomly been protected under the law. “Law enforcement is typically involved, or should be involved when there is a public safety issue,” she says, citing an injured animal in a roadway for example. “If it isn’t a public safety problem, it shouldn’t be their problem.”

And that appears to be a significant part of the larger issue of policing, an issue that has been highly illuminated in recent months: “Police are tasked with too many different areas that they are responsible for,” says Labchuk. “And I think that is a great argument for defunding the police and redistributing those resources.”

“Authorities are forced to uphold laws that see animals as objects,” explains American vegan activist Christopher “Soul” Eubanks, “and are most likely to act in the interest of those laws that oppress animals.” As a person of color, Eubanks adds that he steers clear of activism that involves civil disobedience “including disruptions, and volunteering for animal rescues that may increase my chances of police interaction.” He admits that he has “grave concerns about virtually any interaction with the police.”

“Police don’t generally fulfill that role of a progressive, boundary-pushing authority that tries to seek justice for the vulnerable individuals who need that justice,” says Labchuk, adding that this has long frustrated both animal and human rights advocates.

For now, in the absence of legislation granting animals rights or personhood, and without any government-funded protection agencies with the resources and mandate to put animal welfare first, animal rescuers must instead rely on our own community, our local chicken whisperers, our wildlife rehabbers, and those activists willing to put themselves on the line to ensure the protection of animals—all animals—in need.

Full disclosure: The author of this story, Jessica Scott-Reid, and one of the sources quotes throughout, Camille Labchuk, host a podcast together for Animal Justice.