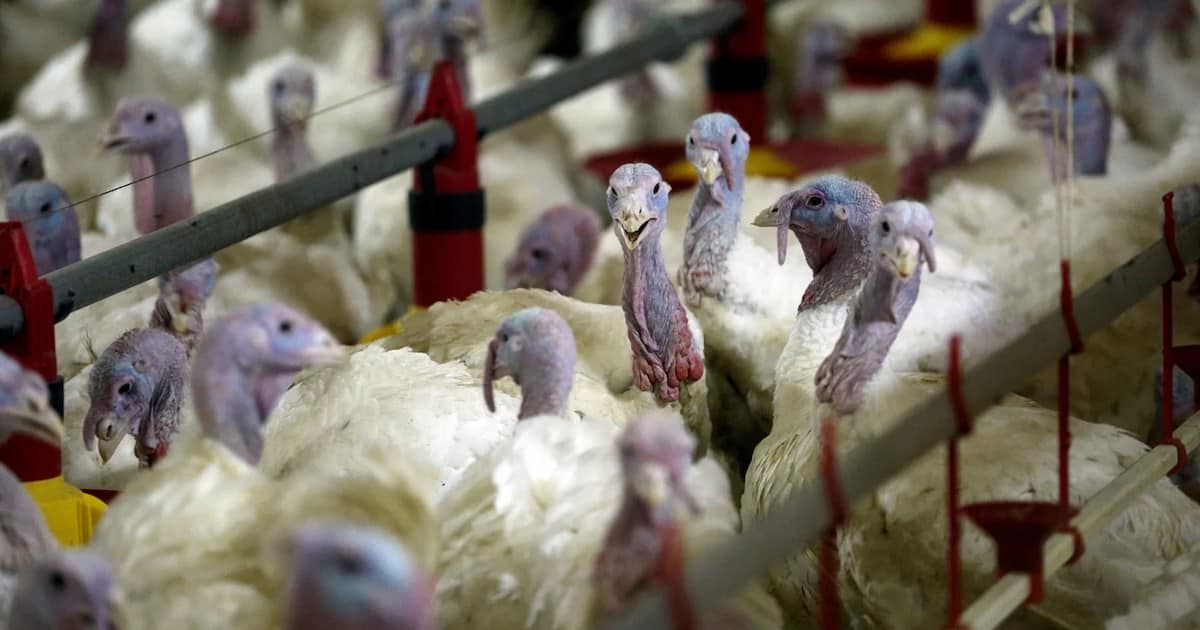 Each Thanksgiving, the President makes the gesture of pardoning a single turkey — just one out of the nearly 46 million birds slaughtered in the U.S. each year for the holiday, mostly the products of intensive factory farming operations. But turkey farming is a year-round business. Since 1970 turkey production has grown by 110 percent — bolstered by cheap feed, breeding enhancements and increased mechanization. This enormous growth has come at a cost — turkeys experience some of the worst conditions of any livestock animals on factory farms other than chickens.

How Big Is the Turkey Farming Industry?

The U.S. is the world’s largest turkey producer and exporter and the second-largest consumer of turkey products (after Israel). According to the most recent U.S. Department of Agriculture data, the turkey farming industry was valued at over $5.8 billion in 2021, producing 7.18 billion pounds of meat, with 216 million individual birds in U.S. production. The turkey industry provides 387,346 American jobs, primarily in rural communities, and accounts for about $22 billion in wages.

Every aspect of a factory-farmed turkey’s life is controlled to maximize the final weight of the turkey for profit. Factory-farmed turkey chicks, known as poults, are hatched via artificial insemination, which is followed by artificial incubation. They spend their lives in enclosed barns with thousands of other birds, receiving a specially formulated feed mixture until they reach their ideal weight, at which time they are sent to slaughter. The industry has increased the size of factory farmed birds through breeding, different feed formulations and modern management practices.

How Long Does It Take To Grow Turkeys?

Female turkeys, or hens, take about 14 weeks on average to reach 15.5 pounds and males, or toms, take about 18 weeks to reach 38 pounds — the weights at which they are processed. The timeline along with cheap feed enable farmers to spend minimal time feeding and housing a turkey while still maximizing the amount of meat they can sell.

How Long Do Turkeys Live?

Wild turkeys can live up to 12 years, whereas captive farmed turkeys only live as long as it takes to reach their maximum weight. Though some turkeys live for longer time periods, all factory-farmed turkeys are slaughtered at a mere matter of weeks. Hens that are designated for breeding typically live closer to 25 weeks, but most turkeys do not pass 5 months of age.

What Do Turkeys Eat on a Farm?

For their first six weeks, turkey chicks eat a mashed mixture composed primarily of maize, wheat offal or bran, groundnut cake and soy meal. The birds then switch to a “grower” mixture made of the same primary ingredients, as well as palm kernel cake. Palm kernel cake is high in fat and protein and helps the chicks put weight on very quickly. It takes an average of almost 80 pounds of feed to get a male turkey over 30 pounds and sent to slaughter.

In modern production, all factory-farmed turkeys are bred solely through artificial insemination to make production as efficient as possible. Commercial turkeys are too large and heavily muscled to breed naturally, so semen is collected from male turkeys and inserted into female hens. When hens’ fertility decreases later in the breeding season, producers inseminate the birds more frequently or with additional semen.

On factory farms, thousands of chicks hatch at once inside sterile incubators that mimic their mothers’ warmth. As of August 1, 2022, there were over 27 million turkey eggs in incubators in the U.S.

Commercial turkey operations use up to 25,000 breeding hens. During the standard 25-week laying cycle, hens typically lay 80-100 eggs. After this cycle, a hen is considered “spent” and is then slaughtered, though sometimes the hens are given a resting period before another production cycle.

Debeaking occurs around 4-5 weeks of age and involves trimming back a chick’s beak to prevent feather-pecking and even cannibalism. This procedure is performed with a very hot tool, and almost always without pain relief.

Desnooding is the removal of the fleshy growth that hangs under the beak, called the snood, to prevent head injuries when birds inevitably fight or peck at each other. Sharp scissors are used to cut the snood off at around 3 weeks old, also without pain relief.

Detoeing, or toe clipping, takes pace a day after chicks hatch. Producers remove the toenail or claw to prevent injury from aggressive behaviors (like climbing on top of each other) that the birds exhibit because they are crowded and stressed.

The sheds in which turkeys spend most of their lives are minimalist at best. The floors are lined with litter (mostly wood shavings) and the sheds only contain basic food and water stations. There is no outdoor access, nor are there places to perch or roost, behaviors that come naturally to turkeys. Because the birds must lie down in the litter, they are prone to wet, dirty litter caking onto them that can cause blisters and sores on their breast skin.

Crowded barn conditions drive poor air quality on turkey farms. Bacteria build up in the litter, while the air becomes filled with dust and fungal spores and is polluted with ammonia. High levels of ammonia can cause respiratory and pulmonary problems, skin conditions and even blindness in turkeys. In the winter months when there is less ventilation, ammonia levels have been known to reach 200 parts per million, while safe levels should not surpass 20 parts per million.

Barns tend to be devoid of good ventilation and natural light. Turkeys experience artificial light for a continuous 20 hours a day. Turkeys have naturally evolved neurobiological mechanisms to gauge day length, which dictates reproduction (as well as diet, growth and social behavior). But in factory farming, these mechanisms are viewed as a check on high profits.

According to USDA inspection records, many turkeys die before reaching the slaughterhouse. During transport, thousands of birds are exposed to extreme heat, cold or wind when crates are not covered properly. Other causes of death include lack of food and water, suffocation and heart failure from stress and blunt force trauma. The process of loading turkeys onto a truck also creates a high risk of injury, including broken wings, dislocated hips and internal hemorrhaging.

Confined and Killed in Vast Numbers

Turkeys typically live in extremely tight quarters with 10,000 individual birds packed into a single barn. They are restricted from running, flying (though they have been bred to be too heavy to fly) and resting comfortably. Barns are filled at such high densities that birds are often unable to even flap their wings. Turkeys become increasingly aggressive from the psychological stress of living in unnaturally close quarters.

As of October 2022, 149,964,000 turkeys have been slaughtered, though this number only accounts for federally inspected slaughterhouses. Additionally, millions of turkeys have also died because of avian flu, whether they fell victim to the disease or were culled.

How Are Turkeys Killed in Farms?

Millions of chicks do not survive the first few weeks of life on a factory farm simply because they stop eating and starve to death, presumably due to stress. Turkeys are typically moved to slaughter by holding them upside down in shackles, stunning the birds as they are dunked into electrified water and then slitting their throats as they move down the conveyor belt. This is followed by another dunk into a pool of scalding water meant to remove their feathers. When a turkey is not successfully rendered unconscious, it is most commonly burned or drowned alive.

There are many plant-based alternatives to factory-farmed turkey that can be served on Thanksgiving, and Farm Sanctuary offers symbolic adoptions of turkeys rescued from slaughter. Beyond Thanksgiving, Sentient Media’s Take Action guide includes a full range of resources for eating a more plant-rich diet.